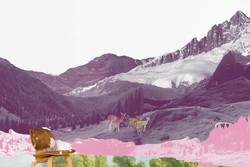 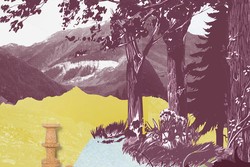 Pandarosa, or the PANDAS as they are often referred to, are the brainchild behind Ariel Aguilera & Andrea B. Their work expands a wide range of approaches, including figurative illustration, abstract dreamscapes, bold iconic designs, detailed hand-drawn l

ages of Frame, Icon, (inside) and Poster with their illustrations & have been utilised by galleries, theatre & dance companies for their cultural graphics. Clients such as Farina, Volkswagon, Domestic, Hecker Phelan Guthier, Lee Jeans, Adidas & Julia DeVi

lle have commissioned the pair & their work has been featured in titles such as Frame, The Design Files, InDesignLive, Grafik, Tokion, Artichoke & Design 360 as well as many other book publications. The group exhibit regularly & have been involved in nume

rous exhibitions across Melbourne, Hamburg, Madrid, Berlin, Barcelona, Tokyo & Los Angeles. Pandarosa have a commitment towards developing their own perspectives of thinking, feeling and researching in their work & through them aim to not only describe bu

t also stimulate the imagination, thus showing the possibility of a tight co-existance between design and art.