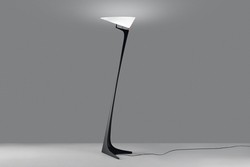 Santiago Calatrava Valls is an internationally recognized and award-winning Spanish architect and engineer whose principal office is in Zurich, Switzerland.

Calatrava was born in Valencia, Spain, where he pursued undergraduate studies at the Architecture School and Arts and Crafts School.
Following graduation in 1975, he enrolled in the
Swiss Federal Institute of Technology (ETH) in Zürich, Switzerland for graduate work in civil engineering.
In 1981, after completing his doctoral thesis,
"On the Foldability of Space Frames", he started his architecture and engineering practice.

Classed now among the elite designers of the world, he has offices in Zurich, Paris, New York and elsewhere.

Calatrava's early career was dedicated largely to bridges and train stations, the designs for which elevated the status of civil engineering projects to new heights. His elegant and daring Montjuic Communications Tower in Barcelona, Spain (1991)
in the heart of the 1992 Olympic site was a turning point in his career, leading to a wide range of commissions. The Quadracci Pavilion (2001) of the Milwaukee Art Museum was his first major US building.

Calatrava’s entry into high-rise design
began with an innovative 54 storey high twisting tower, called Turning Torso (2005), located in
Malmö, Sweden. Calatrava is currently designing the future train station - World Trade Center Transportation Hub - at Ground Zero in New York City. Calatrava’s style has been heralded as bridging the division between structural engineering and architecture.
In this, he continues a tradition of Spanish modernist engineering that includes Pier Luigi Nervi and Félix Candela, as well as Antonio Gaudi. Nonetheless, his style is very personal and derives from numerous studies he makes of the human body and the natural world.