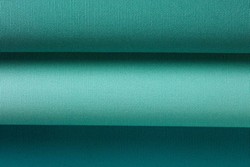 Satu Montanari was born and grew up in Finland. She graduated from the University of Art and Design, Helsinki, in 1981 and then immediately landed a job as a designer with Marimekko, Finland’s big name in textiles. Here, her textiles aroused so much inter

est internationally that she moved to Italy, where she has now been working for ten years alongside some of the world’s leading architects, having exhibited her work in France and Japan as well as other countries.
She has been a guest lecturer at the

Universities of Helsinki and Turku and has taught at the Helsinki School of Industrial Design. As a Finnish textile designer, she is very much influenced by the strong weaving tradition of her native land, and particularly her links with Marimekko, but h

er long stay in Italy has also helped shape her life and work.
To Satu Montanari, inspiration is a complex phenomenon. She has without a doubt been strongly inspired by the Finnish landscape, but nature is in itself a highly complex, intangible quanti

ty, she explains. So, it is more a case of storing images and impressions of the colours and shapes of the landscape in her memory, ready to be brought out and expressed later by being worked into textiles.
On the other hand, Satu has always had an un

complicated relationship to colours and has always found it easy to develop and use them. Previously, Satu only used random images and impressions of colours, transferring these onto her textiles. She has now systematised her colours. This simplifies her

work, but she emphasises that a good sense of colour does not simply come from systematising colours.
Her greatest strength as a designer is her refusal to give up – a quality that she has learnt from her long stay in Italy. In Italy, she learned to

fight for her ideas and views and she learned that if you fight long enough, you win.Satu Montanari is an example of the complete designer, mastering all facets of the art. She is also an elegant example of, and innovator in, Scandinavian style – a simpl