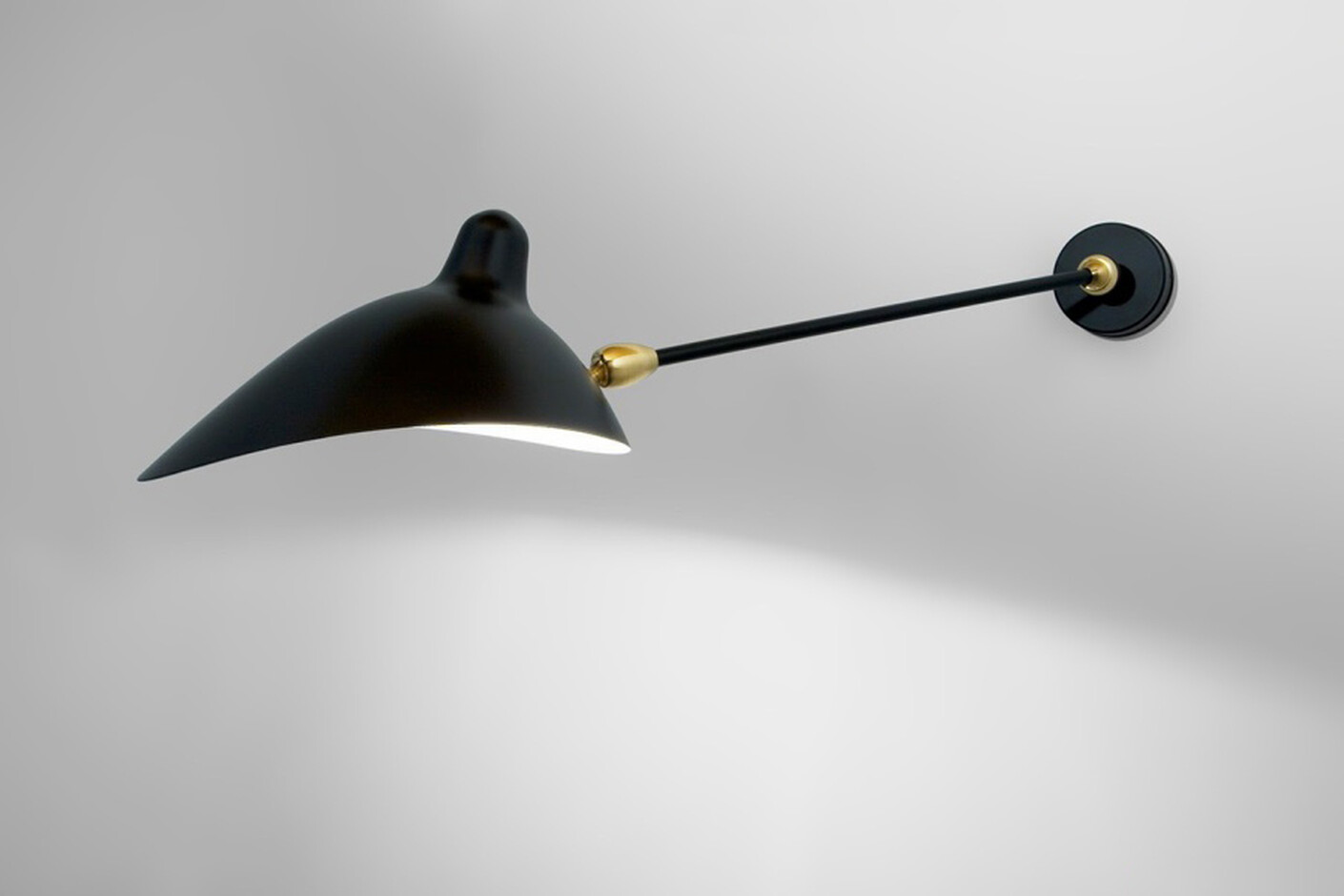 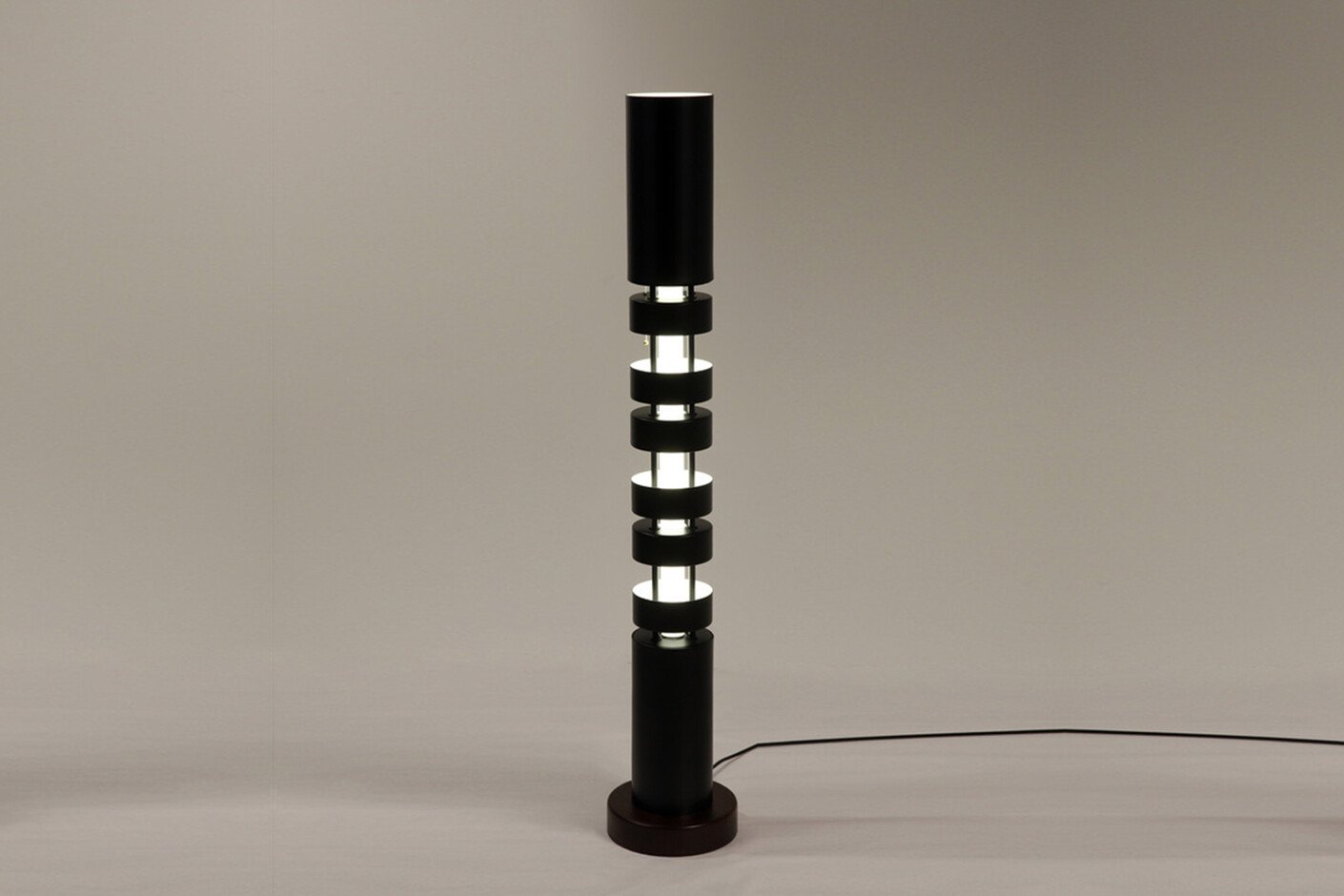 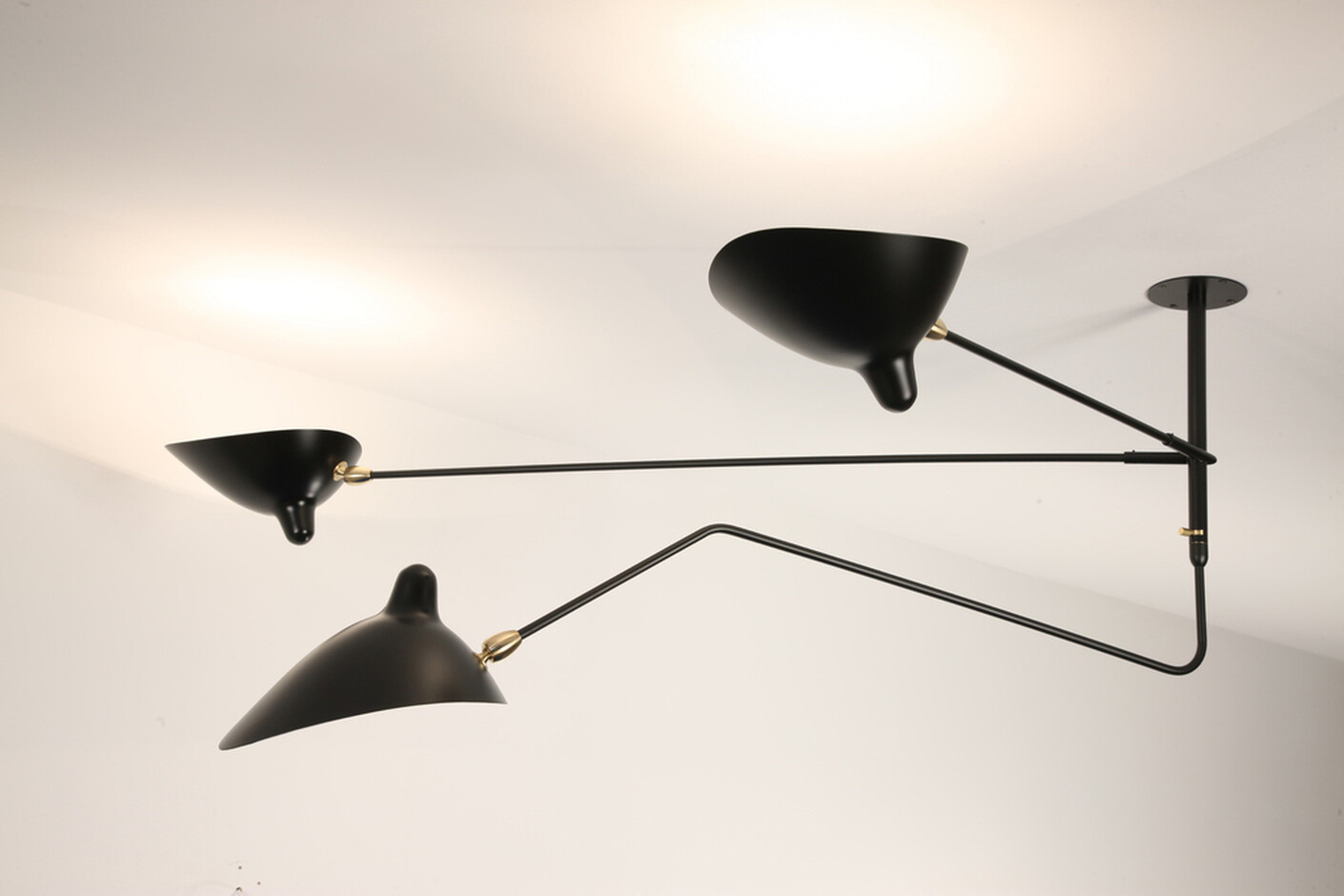 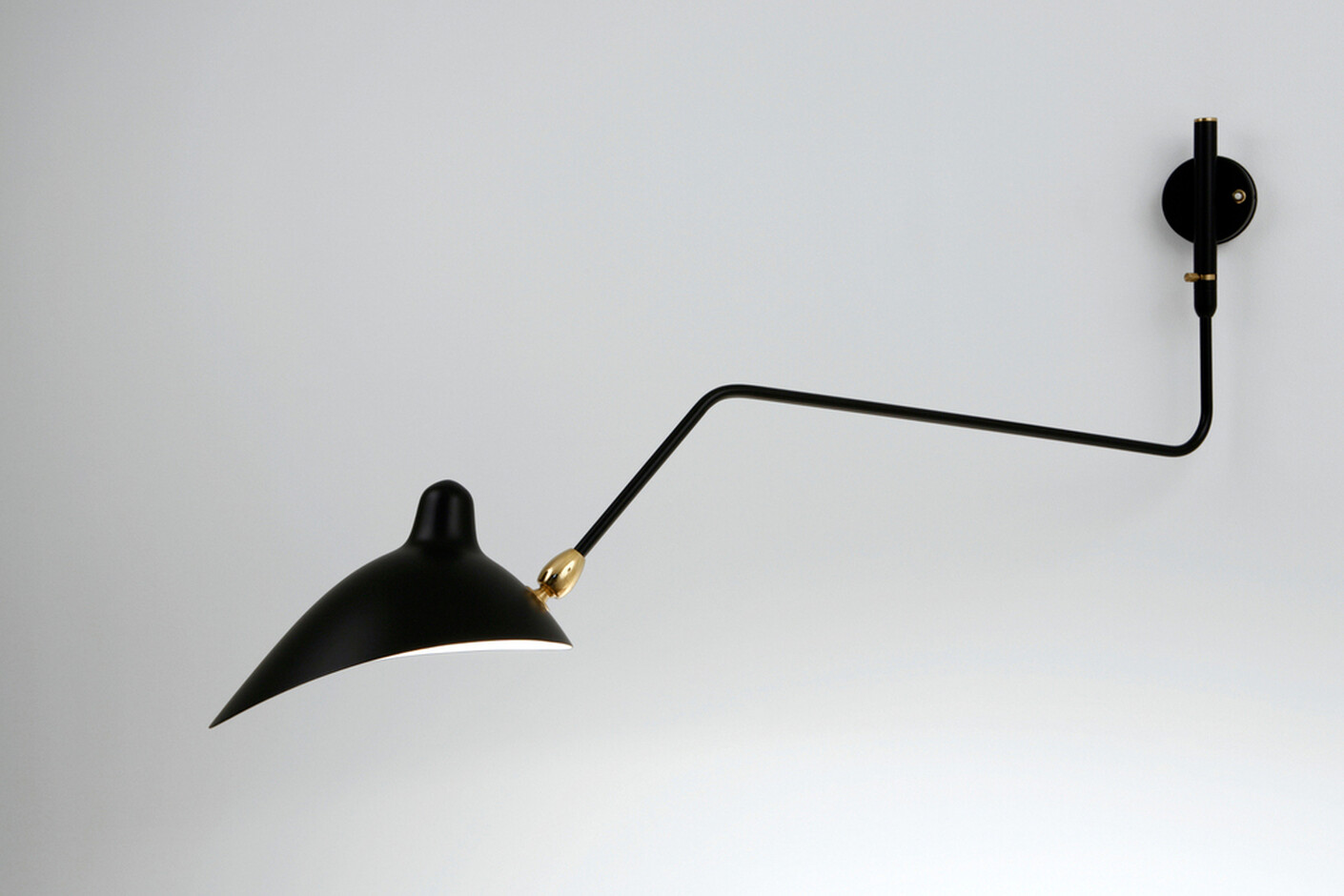 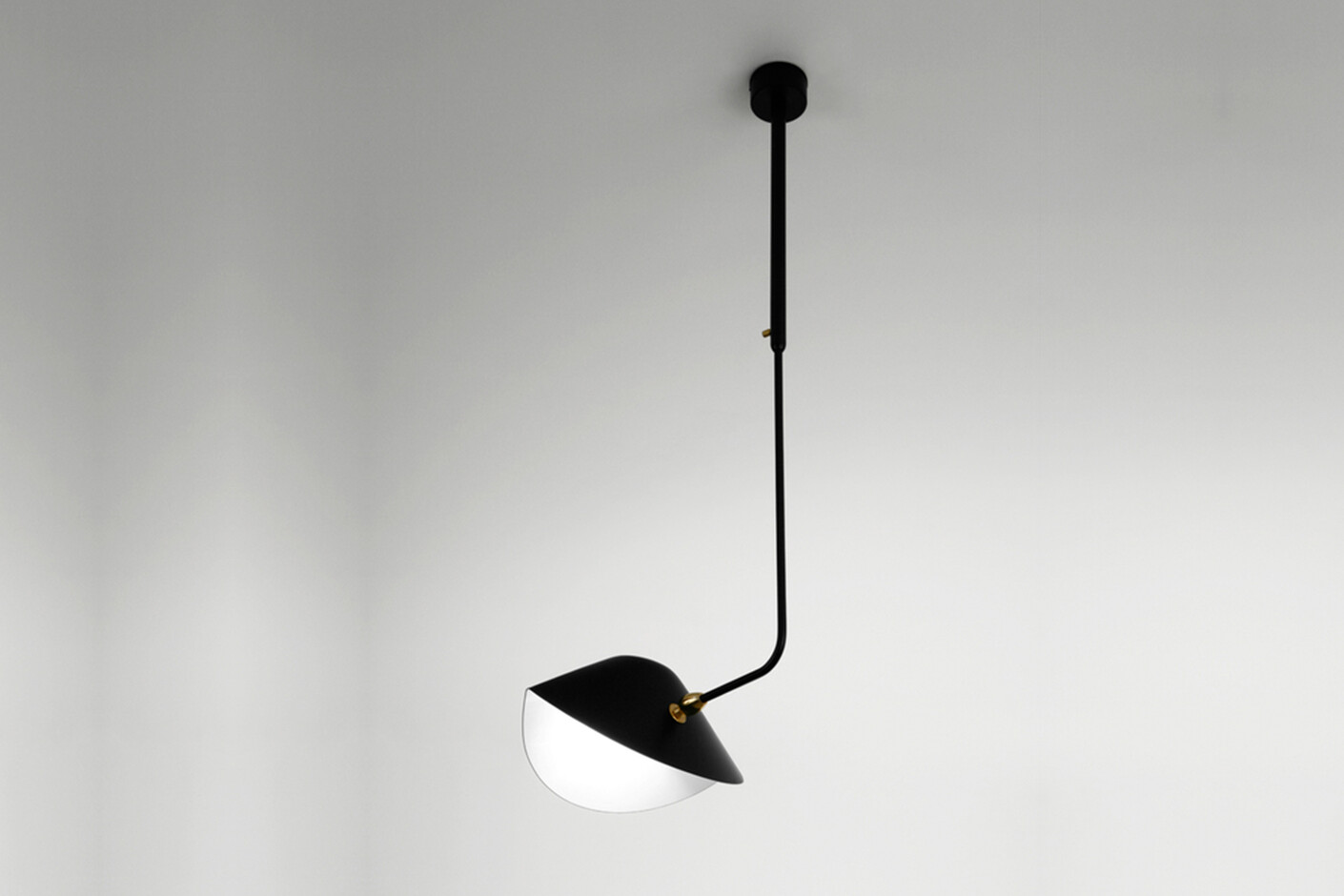 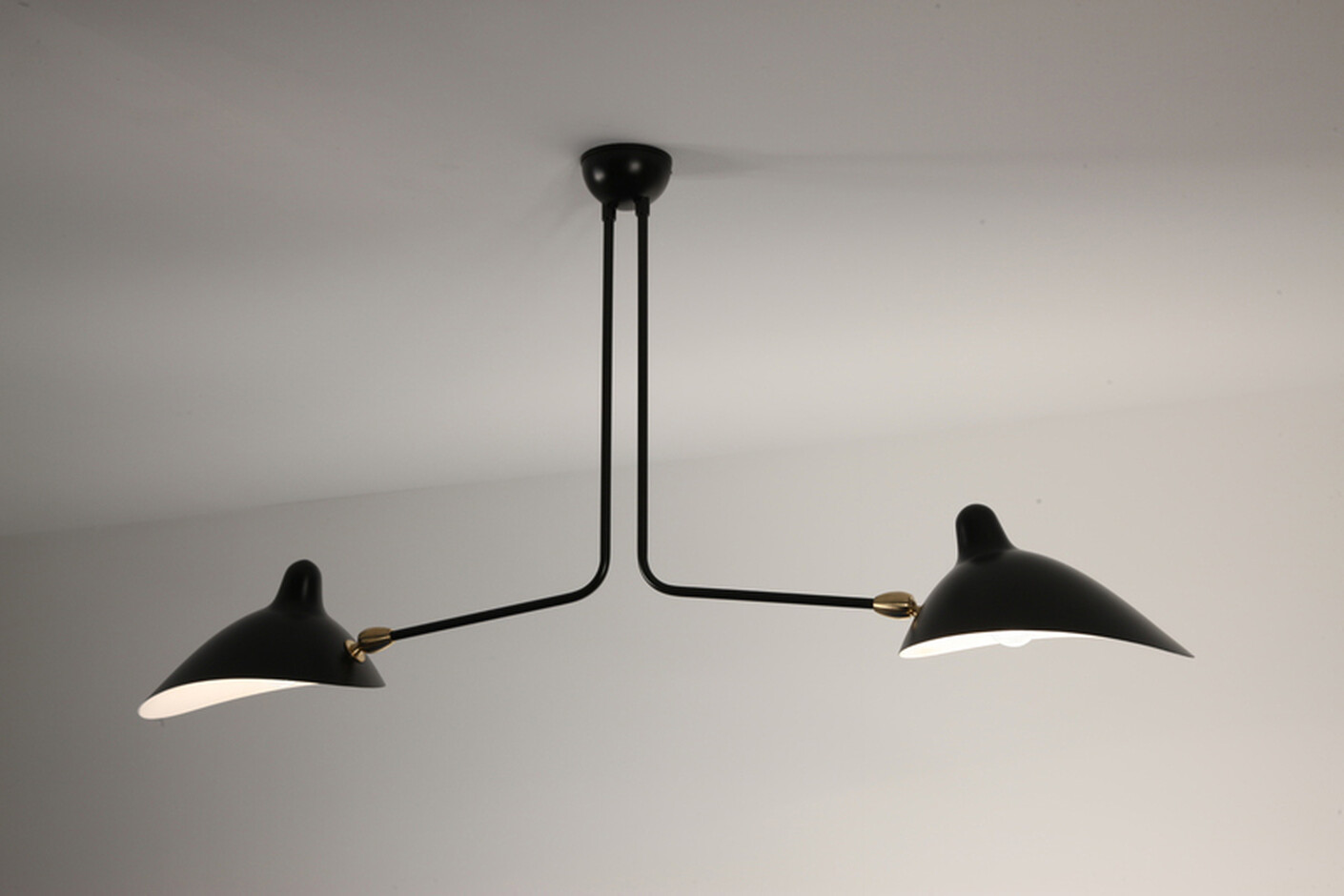 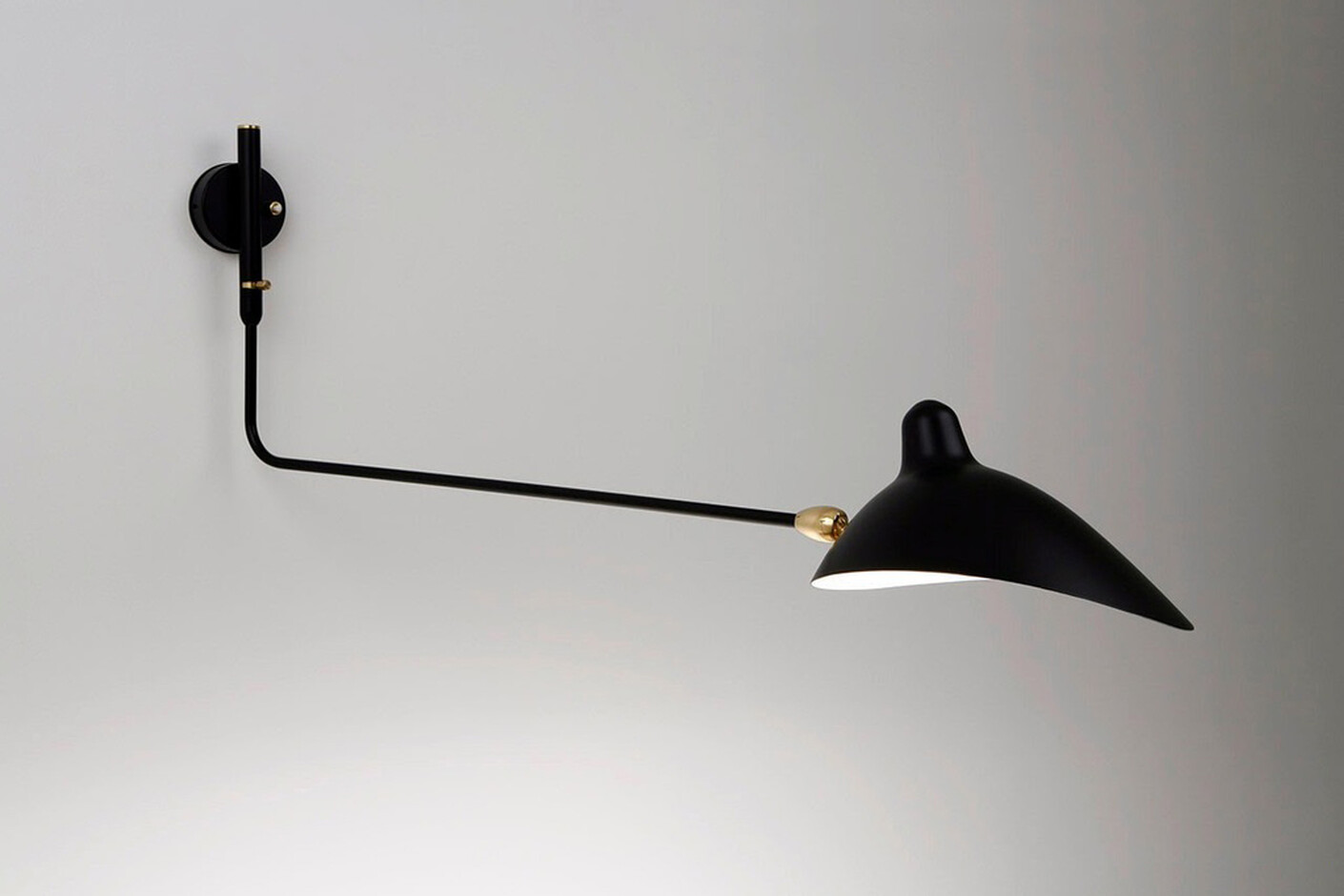 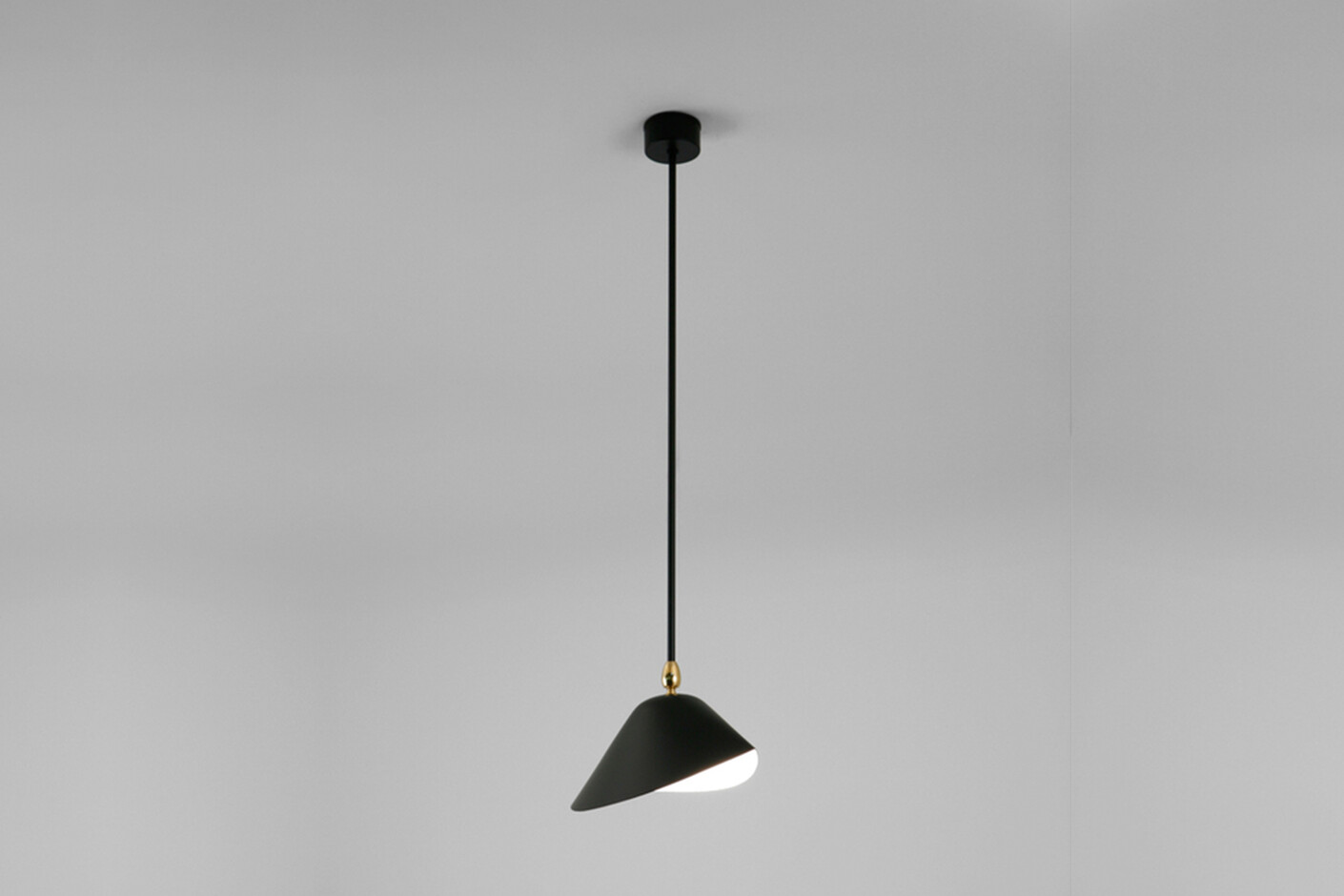 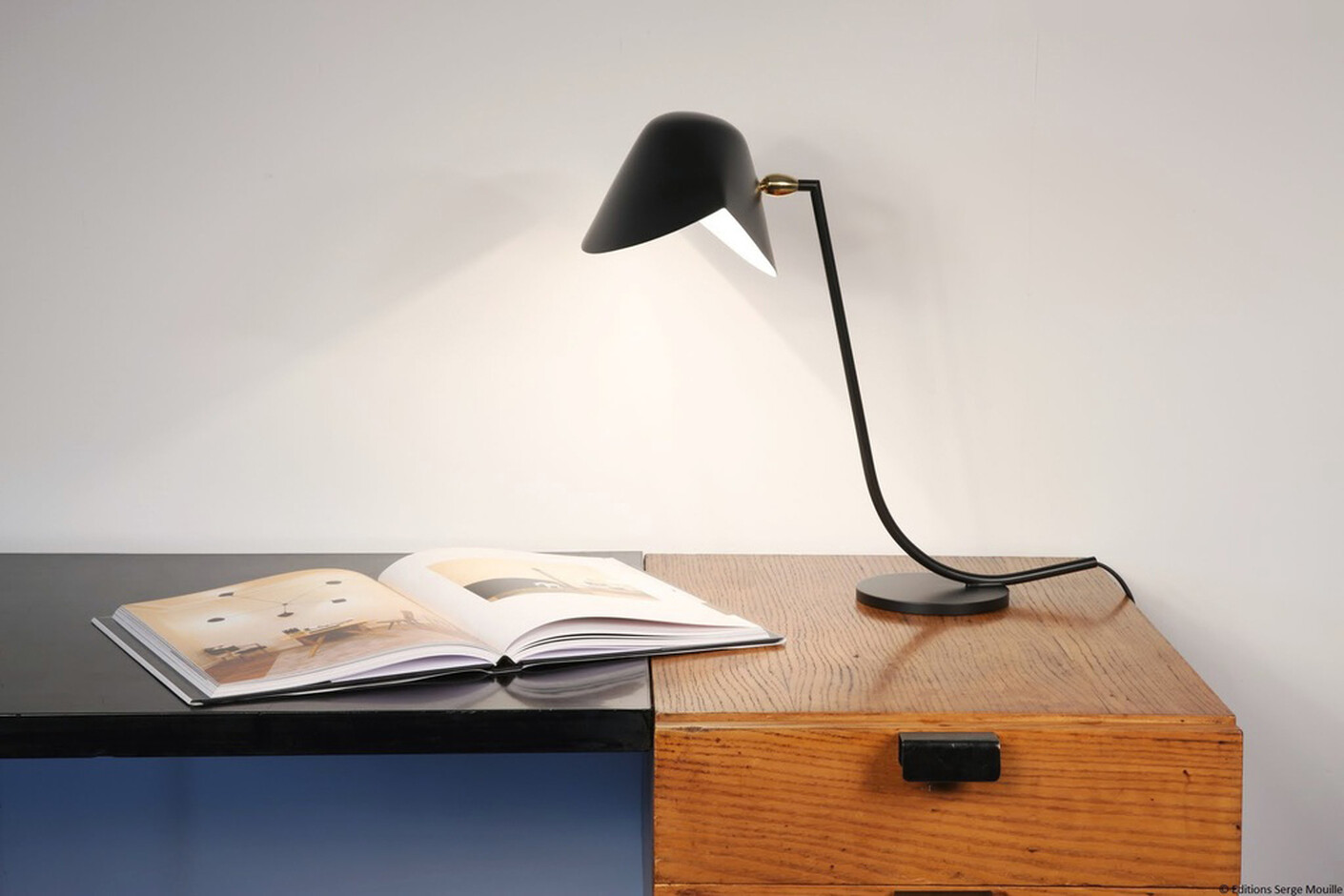 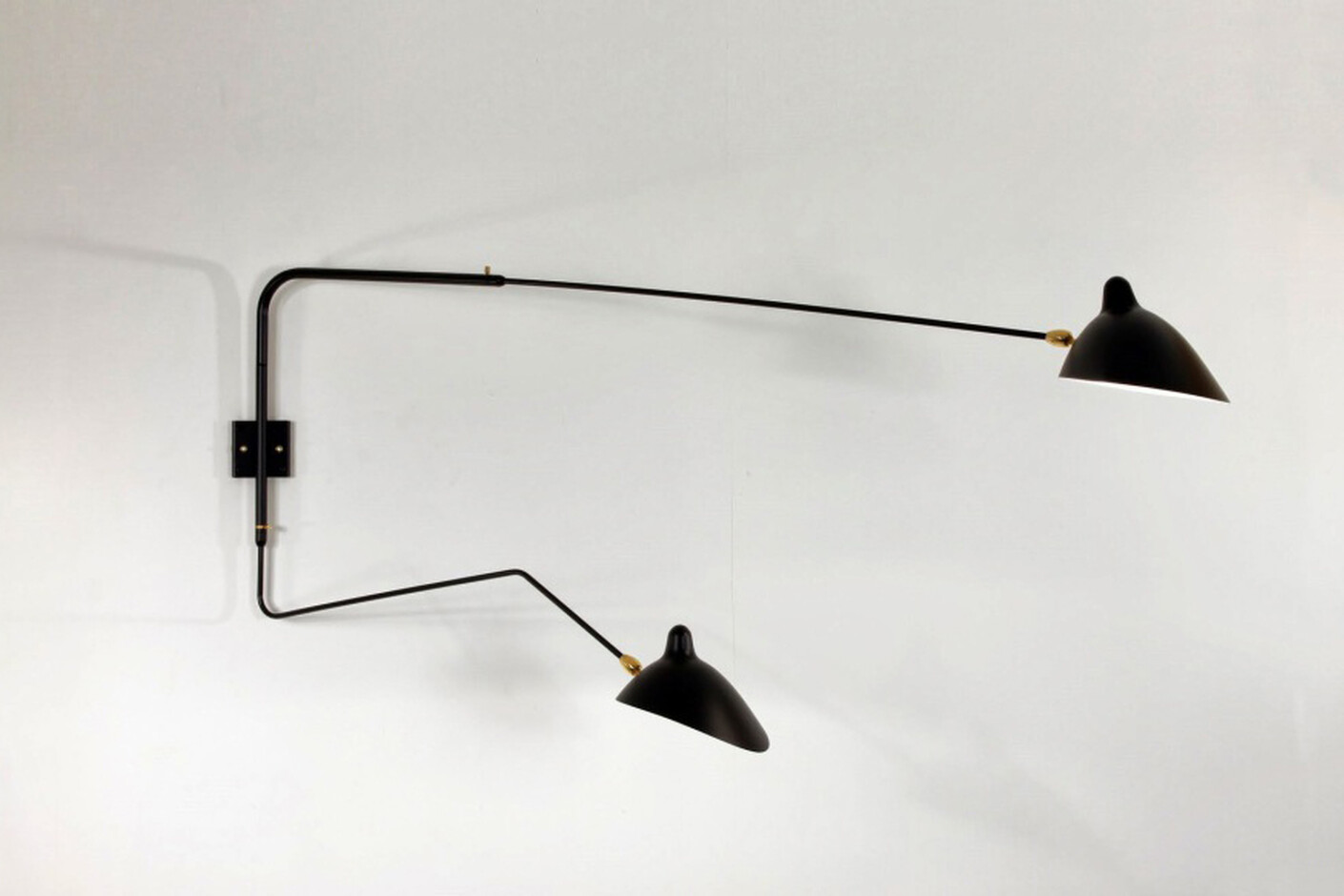 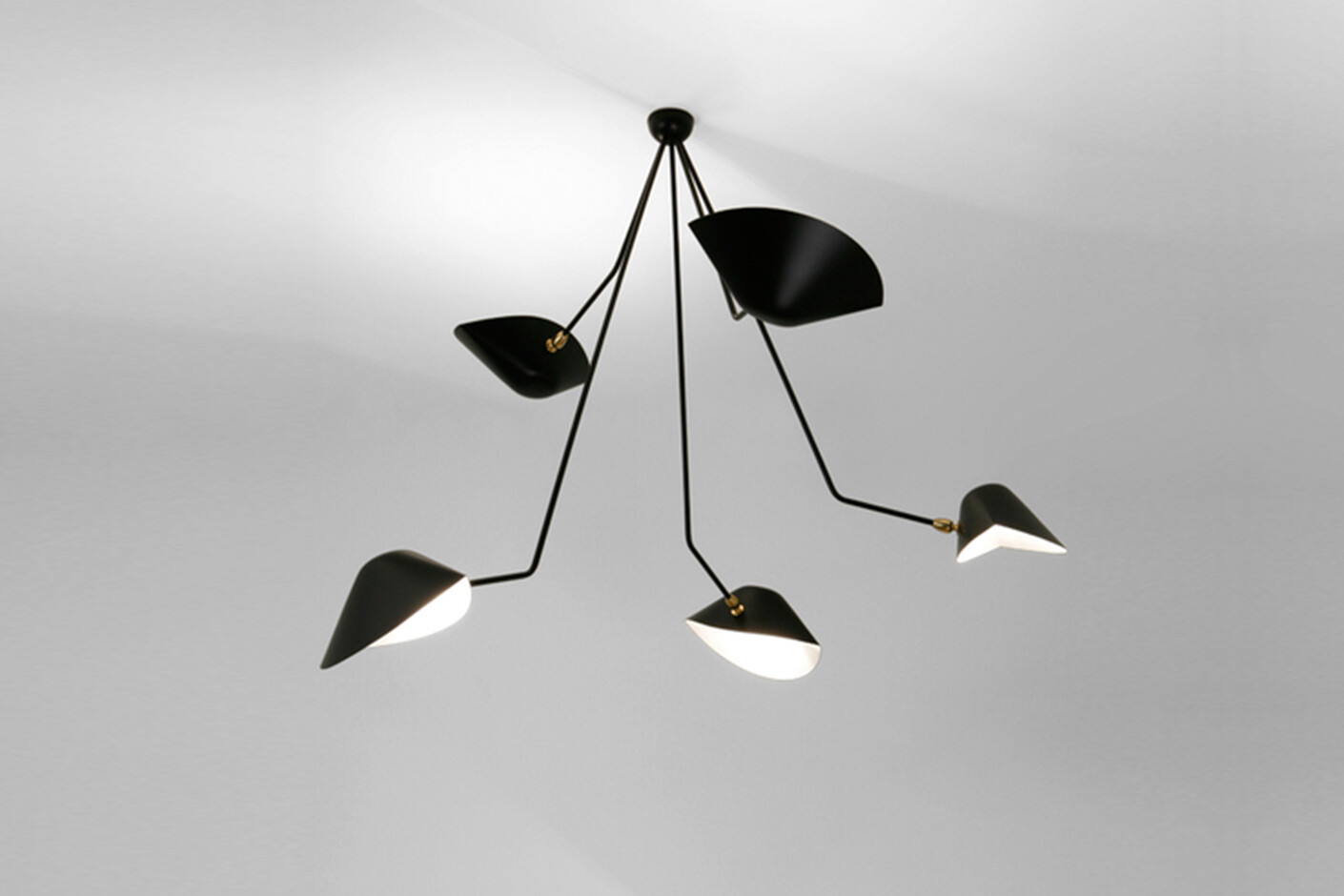 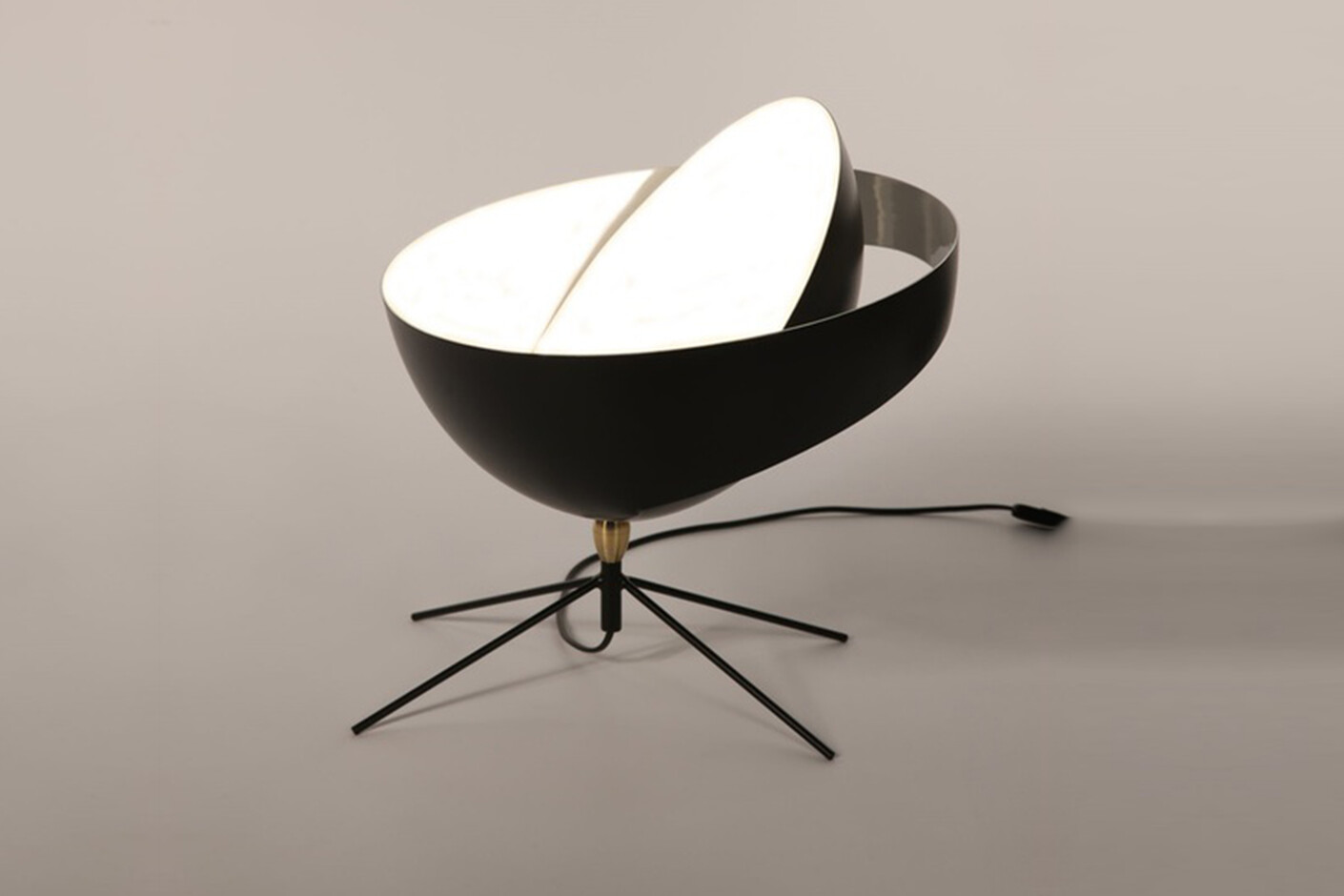 Serge Mouille was born on December 24, 1922 in Paris. There, he attended the École des Arts Appliqués from 1936 to 1941, completing training as a silversmith under the direction of the artist and sculptor Gilbert LaCroix. Following this period of study, he began working as an assistant in LaCroix’s studio.

In 1944, Mouille and his brother joined the Résistance movement. After the war ended in 1945, he eventually obtained a position as an instructor at the École des Arts Appliqués and opened his own metallurgy studio. His designs from this period include banisters, chandeliers, and wall sconces, as well as the automobile “Le Zèbre” – the product of a collective effort with Pierre Pothier and Jean-Pierre Darnat. In 1953, Mouille was commissioned by Jaques Adnet to design light fixtures – an art that would fascinate him for the rest of his life.

Serge Mouille was inspired by nature and eroticism; it is not by chance that his work evokes associations with the curves of the female body and other natural forms. During the 1950s, he designed the lights of his renowned “Serie Noir”. The shades of this series were based on a single prototype – dubbed “Tétine” – and possess a form ideally suited to reflecting light. In addition, the “Serie Noir” pieces feature swiveling heads that enable them to take virtually any position. Also emerging from this period were large, angular, insectoid wall lights and standing lamps with numerous arms, as well as smaller, more rounded wall sconces. Some of Mouille’s best-known works from the time include “Oeil” (1953), “Flammes” (1954), and “Saturn” (1958). His aim was to fashion a kinetic-sculptural aesthetic that would set spaces in motion. Mouille saw his works as a response to the Italian models that had overrun the market in the early 1950s – inspiring, but of much too complicated design for his taste. During this period, Mouille’s works were exhibited mainly at the Galerie Steph Simon in Paris.

In 1955, Mouille joined both the Société des Artistes Décorateurs and the Société nationale des beaux-arts (French National Society of Fine Arts). That same year, he received the Charles Plumet Prize for his work, as well as an honorary certificate at the World’s Fair in Brussels in 1958. At the end of the 1950s, Mouille began creating lights with a more pronounced architectural influence. In the years that followed, he was responsible for designing the lights installed at the university residence in Antony (Paris), schools in Strasbourg and Marseille, and the cathedral of Bizerte (Tunisia). The end of the decade also saw the advent of the neon light inspire Mouille to develop a series of floor lights. These designs – which comprise the “Collonnes” collection and include some of Mouille’s most famous later works – were then presented for the first time at an interior architecture exhibition in 1962. In 1961, Mouille founded the Société de Création de Modèles to provide young, unconventional light designers with an official platform. He then ended his own design activities in 1963 to focus fully on teaching from that point onward. Mouille displayed his lights and jewelry at many exhibitions, and he received an honorary award from the city of Paris for his life’s work as an artist in metallurgy and design in 1976.