She is neither of Swedish nor of English background! Susanne Philippson (*1979) is a young German product and furniture designer who, in 2005, chose Berlin to set up her business after having studied at the Eindhoven Design Academy and Ravensbourne Col

In 2003 she gained work experience at the Design Office of Muji in Tokyo.She has brought projects into production at an early stage of her career, for instance the ‘Compact Desk‘ launched in 2002 with Habitat. Later

that year a conceptual project was taken into the permanent collection of Droog Design.Straight after graduation, through continuous exhibitions at the Salone del Mobile, she acquired clients such as Pallucco. Since then innovative lighting projects such

as the ‚Guardian of Light‘ or ‚Joiin‘ have entered the market. 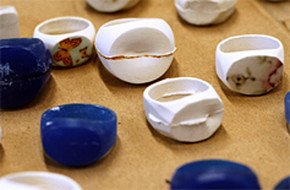 Cologne has had to take a lot of criticism this year. Ben van Berkel's already almost legendary carpet flop in Hall 11, which was heralded as an urban master plan, visibly lacked an overarching concept, and the international audience increasingly shied away from Cologne, hitting it very hard.
Advertisement