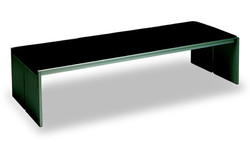 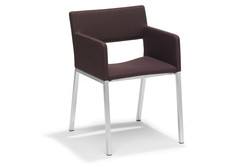 Wim Quist completed his studies at the Architectural Academy in Amsterdam in 1960. He then started his own architecture office. From 1968 to 1975 he was Professor of Architecture and City Planning at the Technical High School in Eindhoven. For the next

five years he was government-appointed architect. He became Professor Emeritus for Architectonic Design at the University of Amsterdam in 1987.

Wim Quist first designed furniture for himself while he was still a student. Real affinity with the

en 1982-1984 for the Queen's office rooms at the Palais Noordeinde in The Hague.

Quist considers furniture to be like a small building; both should be useful, efficient and durable, while expressing a neutral character. His designs start with t

he requirements laid down for the furniture by the client. Quist's admiration of functionalism, particularly in its Finnish expression, is shown in his designs; the furniture has clear, geometric shapes and straight lines. But Quist has greater freedom th

an the functionalists, by designing the legs as angled surfaces, for example. He also makes great use of glass and metal. He gives his furniture no decoration , but takes great care with the details, such as the slit in the BQ 01 settee for Spectrum.

>
Quist has mainly designed houses, offices, factories and public buildings, such as libraries and museums. The Kroller-Moller Museum extension (1970-1977) is one of his best-known works. Quist is also a member of various juries for architectural pri