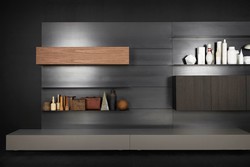 Wolfgang Tolk studied at Braunschweig school of art (hochschule für bildende künste), moving to the academy of fine arts in Düsseldorf in 1981.
He designed the halogen lamp minimum which has been put on display in various European mus

eums. In 1989 it was added to the collection of the museum of applied arts in Cologne, Germany.

Since 1990 he has made prototypes of minimalist, linear objects, mostly in stainless steel and wood, in addition to his work as an artist. His work

s have been exhibited in Cologne, Chicago, Milan and Korttrjik, Belgium. He works with Italian companies such as Allglass, Boffi, Cappellini, Living Divani and Porro. Wolfgang Tolk lives and works in Cologne, Germany.