Whatever your take on the mysticism of numbers, let’s be honest: 2016 – Sweet Little Sixteen – didn’t really live up to what the cute, youthful sounding name seemed to promise. I don’t even want to start listing all the things that didn’t turn out as expected or simply went down the tubes in the year that has just come to an end. You know the names of the familiar disasters (not including personal ones), ranging from A for Aleppo and B for Brexit to T for Trump and, yes, that too, Trousergate. Sweet Little Sixteen? Hardly.

So what can we expect in the coming year? When in Germany, allegedly the country of poets and thinkers, in the subject of German at high schools the correct written language is only of secondary importance and students can get an A- for a German assignment full of errors in spelling, punctuation, grammar and phrasing? Nonetheless, there are plenty of people who don’t just want to talk about education and practice the opposite. Others, or the same ones, want to go back to a form of economy that doesn’t continually crash. Moreover, ever more people don’t want to be chained to computer screens wherever they go and be incessantly offered their supposedly secret wishes (which in reality have been construed from stolen data).

But let’s not indulge in post-truth moaning or the illusion of a “post-election policy” and instead concentrate, given that 20 as a round number doesn’t give us much in numerological terms, on the number 17, which will be accompanying us for the coming year. The unaffected calendar flips over anyway and we have to go with it, ever on, ever forwards. Seventeen, so what is this number all about?

We can take German Folk-Pop bards singing of “seventeen years, blonde hair” and song lyrics like “At 17 you still dream” trilled by their female counterparts as historical fact (unfortunate as that may be), but it doesn’t really help us. But if you make the effort, you will quickly discover that in ancient times and in the Orient the number 17 was very significant, with the state god of Urartu, the area around Mount Ararat, being offered 17 sacrifices. In the Bible it is, surprisingly enough, associated with the Flood, which began on the 17th day of the second month and ended on the 17th day of the seventh month, when Noah reached Mount Ararat. The number 17 also plays a role in the final chapter of the Gosepl according to John: When Jesus revealed himself to his disciples on the Sea of Galilee they were fishing, but hadn’t caught anything all night. Jesus said to them: “Children, have ye any meat? They answered him, No. And he said unto them, Cast the net on the right side of the ship, and ye shall find.” When Simon Peter pulled the net full of large fish onto land later on he counted 153 fish – “and for all there were so many, yet was not the net broken.” (John 21, 1-14)

Over time many people have wondered why the precise number of fish is given here and why the number 153 is significant. Church Father Augustine looked to mathematics and realized that 153 is none other than the sum of the numbers one to 17. He split the number 17 into the Ten Commandments and seven gifts of the Holy Spirit, and the Acts of the Apostles allegedly lists 17 names of ethnic groups that witnessed Pentecost. Seventeen even appears in the Book of Revelation. In 13, 1 John writes: “And I stood upon the sand of the sea, and saw a beast rise up out of the sea, having seven heads and ten horns, and upon his horns ten crowns, and upon his heads the name of blasphemy.” The beast that rises out of the water is God’s adversary, who wishes to take His place and claims the attributes of His holiness for himself.

The number 17 seems to be repeatedly associated with water, flooding, fishing and strange beasts. This may be one reason why the Greeks once thought that the timber for shipbuilding should be felled on the seventeenth of a month if at all possible. In Egypt too, it was likewise on the seventeenth that Osiris, god of the underworld, rebirth and the Nile, was given over to the flood in Typhon’s coffin.

If we switch to the field of mathematics, we find we are standing on somewhat firmer ground. We come across Carl Friedrich Gauss, who in 1796 was the first to prove that one can oneself construct a regular heptadecagon using a compass and ruler.

The number 17 is also considered, and this should put us in a more hopeful mood, the number of overcoming. After all, those aged 17 will soon be of age, and thus will overcome youth. So should we be optimistic in spite of everything? Even if what is coming remains in the dark when we look at the number 17? What do we need to overcome the, cautiously put, somewhat tense state we appear to be in?

“Wherewithal / Was es braucht” is the title of an exhibition by Lawrence Weiner on show for a few more days at Kunsthaus Bregenz. As always, here again Weiner formulates in his clear and never sentimental manner why words must not be misused for lies or, as he once said in an interview, “When you do the wrong thing you’re doing the wrong thing – there is no way to rationalize it.” Art, at least, can ask “What if…” That gives rise to alternatives. In art, Weiner is convinced, it is possible to ask people not to believe what they believe for a moment, but to believe what you yourself believe. “That,” he said in Bregenz, “is very difficult for some. You can’t force anyone to accept something. You can only repeatedly offer it. Offer it and offer it again.” And to be sure, that won’t change in 2017. 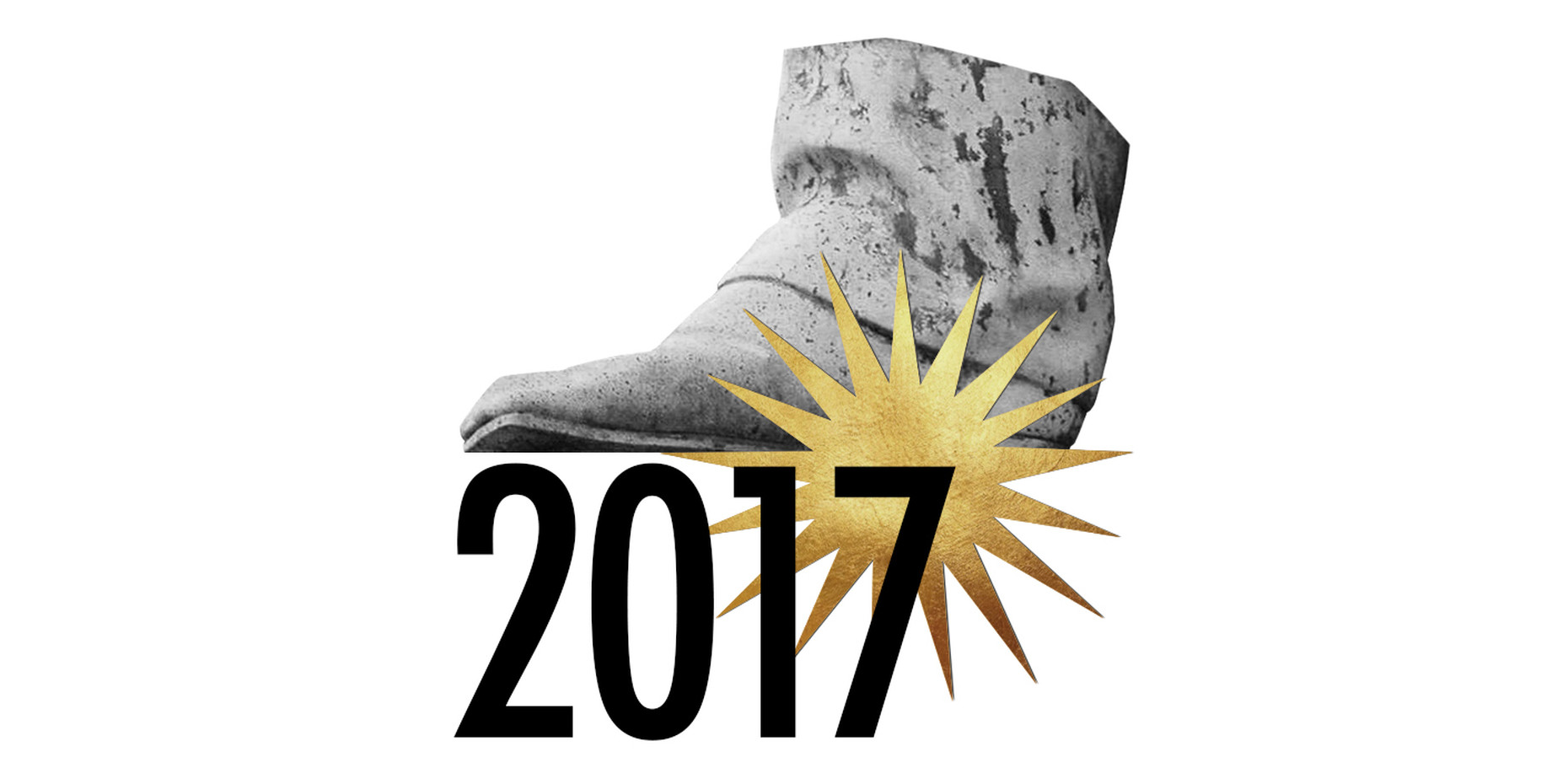