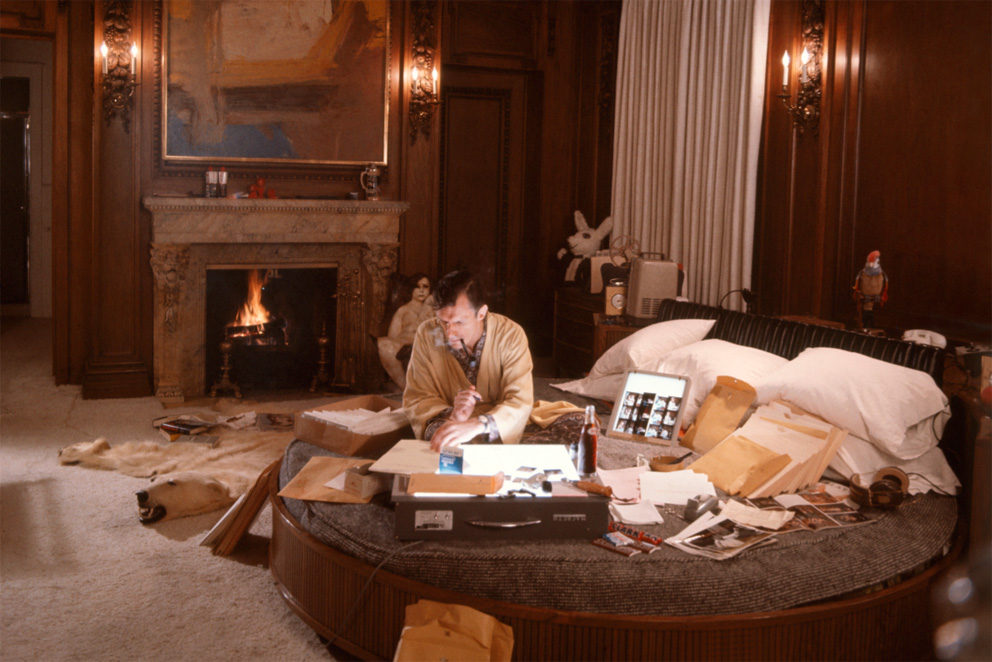 Connected with the world: Playboy founder Hugh Hefner has transformed his bed in the sixties to a workplace. Photo © Playboy Enterprises, Inc.

A bed is a bed is more than a bed. Nowadays they seem so inviting and comfy that it would be wasteful just to sleep in them. One thing is for certain: Whether you are on your own, a duo, or the entire family, whether you want to rest, snog, doze, drift off into relaxing sleep or simply pull the covers over your head and have Morpheus, the Greek God of Dreams, whisk you away from everyday life – you’ll need a bed for it. Admittedly finding the right one is not always that easy. But when looking for the right bed for yourself today you must definitely not waver when it comes to taking decisions.

The days when our ancestors laid down their heads on smooth soft earth or the sand of the desert under the firmament, now seem an awfully long time ago; as does the time when they prepared a place for the night in a bare cave or a modest hut made of branches, straw, leaves, moss or seagrass, placing hides and furs on the floor, seeking protection and in an effort to keep warm. Essentially, back then a variety of different bed systems were already in use, however modest the comfort they may have offered.

It was evidently the ancient Egyptians who, and this is now some 5,000 years ago, were the first to have raised bedsteads built. The specially glorious specimens were destined for Pharaohs and made of fine ebony, with legs ending in lion’s feet and springy wickerwork. And effigies of the gods made of gold, ivory and ebony protected one while asleep. Presumably we also have the Egyptians to thank for the idea of using pillows to cushion the head. Small wonder that renowned Egyptian physician Sinuhe, having spent a long time on the road with Bedouins, sank with such enthusiasm into the softness of his bed at home that he had quite literally so sorely missed.

Affluent Greeks liked to recline on a “Kline”, a couch with a raised armrest at one end, something that also proved useful during meals, as living and dining quarters were not separate entities back then. To go by Homer, Odysseus’ bed consisted of an ornamented frame across which ox hide had been spanned, and on which furs and carpets were then laid. Linen sheets or mattresses filled with wool or plant fibers were purchased in Corinth, while cushions came from Carthage. The Romans took a similar, albeit somewhat more luxurious approach. And even Alexander the Great, who was constantly out on the war path with his troops, spent the night with his beloved Hephaistion on his golden bed hunched over battle plans, before come morning holding a council of war with his generals.

In other words, since time immemorial the bed has been a place of sleep and rest, but also of sociability and politics. The private and the public did not first overlap with the noble courts of modern times, where the royal apartment and the beds of state served both ostentatious and government purposes, for it was there than the ruler received emissaries and held audiences. Even the acts of getting up and going to bed were publicly and ceremoniously celebrated in accordance with a carefully defined plan.

In courtly ceremony, the craft of the cabinetmaker then disappeared beneath the drapes of the decorator. However, some time was to pass before the bed morphed into a more profane object. With industrialization and modernity, the notion of living, sleeping and working again undergoes radical change. By the mid-19th century, the home of the private individual is for the first time the opposite of the place of work. “The private individual,” Walter Benjamin writes in his Arcades project, who in the office has to deal with reality, needs the domestic interior to sustain him in his illusions. This necessity is all the more pressing since he has no intention of allowing his commercial considerations to impinge on social ones. In the design of his private environment, both are repressed. From this arise the phantasmagorias of the interior – which, for the private man, represents the universe. In the interior he brings together the far away and the long ago. His living room is a box overlooking the world stage.

It was not long before he was expelled from that box. At the beginning of the 20th century, the functional standard of labor increasingly conquers the apartment. The tubular steel aesthetics of the office enters into bedrooms. Living space is expensive, and apartments are small, meaning that beds are now only functional and practical in nature.

Today, the interior and with it the inwardness into which burghers once withdrew by heading for bed, has been replaced by networking – in the bedroom, too. What gets lost in the process is symbolized by the eponymous hero of Ivan Goncharov’s novel, Oblomov, who dozes away in bed, wasting his talents, his position in society, and his money. Today and the future are instead epitomized by Playboy CEO Hugh Hefner, who back in the mid-1960s had already outfitted his bed with all the available communications and entertainment devices. Where Oblomov flees into his own dreamworld, Hefner opens up to everything happening around him. The tsar of the media age turns his bed into his place of work, the epicenter of his business.

So under the sign of digitalization and networking things turn around again. If one concurs with architecture theorist Beatriz Colomina, then in the post-industrial age work not only returns home, it actually falls back into bed: She suggests that phantasmagorias no longer cover space in the form of wallpaper, fabric, pictures and objects. They now reside in the electronic appliances. The entire universe is concentrated on a small screen and the bed drifts in an infinite ocean of information. To lie down no longer means to rest, but to move, she continues. In other words, it is not only the dining table and living room become multifunctional in any home office. As you can easily use a laptop, Smartphone and tablet PC in a reclining posture. Colomina points out that reading, writing, compiling news, recording, transmitting, listening, speaking and of course eating, drinking, sleeping, sleeping with somebody are things that happen in bed and have become work as a consequence.

Design squares up to this. The days when mattresses were simply laid on the bare floor in student lodgings to protest against the establishment are now a thing of the past, once and for all. It is Sybaris and not Sparta that is worshipped. Beds are getting bigger, more comfortable, more pompous, sometimes more upper class and aristocratic. And the majestic magic offers a quantum of solace over the loss of the private sphere in the networks that have long since snared the bed in their web. The boom in box-spring beds in Europe in recent years could definitely be a matter of compensatory acts.

One element of current design speaks in particular in favor of the bed as the ultimate place for 21st-century creative minds: Be it refined or massive, feudal or minimalist in design, the bed will invariably feature a large and most probably upholstered headrest. In this way, the salon as the “box overlooking the world stage” today melds with the specter of the bed as upholstered box – to which digital natives withdraw in order to be completely alone and yet infinitely distanced from themselves. Who could then dare say that a bed is only for sleeping…