Nowadays, a promising passage across the frozen sea of progress no longer takes us through barren northern landscapes. It has indeed been a long time since those in search of something new had to battle their way through endless expanses of ice along the Northwest Passage. Now it is the somewhat congealed fields of communication and their economic rationale that are in search of new ways and ideas. And one’s own history along with its traditions plays a pivotal role here. Not wanting to fall behind in the 21st century and aspiring to glide successfully into the future and master the new conditions it brings with it, the Scandinavian furniture industry is also beginning to carefully loosen its grip on tradition and explore new territory, where there are more options than simply continuing down the same road or breaking away from the past completely.

This year’s Stockholm Furniture Fair hosted 730 exhibitors from 30 countries –80% of them being Scandinavian. And indeed, at many stands one could clearly discern the key components that are still very much in play in the various manifestations of “Scandinavian Design”. Most notably, those deeply rooted “Scandinavian values”, simplicity, reliability and high-quality craftsmanship, are as present as they ever were. In addition to building on and strengthening these values, one could definitely sense that they were striving not to let things stagnate. In line with this, everywhere you looked designers were trying to create something that would allow them to stay true to their own principles, while using high quality to pitch itself against cheap competition from the Far East, which has not failed to leave its mark on the Scandinavian market.

A spring full of color

As such, not only do we come across combinations of white lacquered surfaces and light wood, but there is also a great deal of boldness shown in refreshing uses of color, be it pure, bright hues or shaded pastel tones. Swedish furniture maker Johanson paraded “Rib” by Alexander Lervik in an array of strong colors; Montana had its system furniture cover an entire wall in a warm sunflower yellow; and at Fredericia visitors could marvel at Nanna Ditzel’s “Trinidad” chair in “Flamingo”, radiating some Caribbean heat from the Danish furniture maker’s stand.
Even Stolab complemented its pieces in natural wood and black or white lacquered finishes with a panoply of fresh pastel tones. And in celebration of the 80th birthday of Alvar Aalto’s “Stool 60”, Artek wooed the public with a new version boasting colored seats designed especially for the occasion by Mike Meiré. You’ll remember that Meiré paid his respects to the Finnish design icon last year, producing a hand-painted version of the classic in the spirit of “customizing”. And at Skafab it looks like a revival of the hippie trend is in the offing, with colorful flowers as far as the eye can see.

With so many bright, friendly colors you have no choice but to believe that it’s already springtime in the world of Scandinavian furniture. Which actually doesn’t seem too far-fetched, considering that in the long run we can only achieve success with products that are sustainable in the materials they use and whose aesthetics can simply be adapted in line with the transitory cycles of public taste, which seems to change with wind, constantly crying out for new trends. But this is perhaps easier said than done. For if the balance isn’t just right, modern Nordic simplicity could turn into its exact opposite: stuffiness.

Color is just one of the key characteristics of this Nordic spring. The Scandinavians still demonstrate an expert understanding of precise, solid workmanship when it comes to wood in all its possible variations, and a whole host of other materials, too. Take the “Nerd Chair” for example, a dining room chair in laminated plywood designed by David Geckeler for Muuto last year (note: by no means related to the archetypical nerd and his/her inherent lack of taste and style). The height of technical sophistication, its backrest boasts a slight concave curve inserted into the convexly arching seat, without any kind of nails or screws holding it in place. Oki Sato of Nendo design studio takes a similar approach (if a little less elaborate in its execution) with his “Cape chair” for Offect.

A landscape of snow-capped mountains

What is more, Oki Sato, who was Guest of Honor at this year’s fair, also transformed the entrance hall into a huge artificial garden in white-lacquered metal, redolent of snow-capped mountains. He also presented a coat stand (“Ski 1” for Swedese), whose hooks allude to the snowflake shape of old ski-pole baskets, and the outdoor chair “Curve” (for Berga), which is however much more inviting as a treat for the eyes than somewhere to sit and relax. Furthermore, Nendo designed an entire lighting series for luminaire manufacturer “Wästberg”, which came up with a rather fitting design for their trade fair stand complete with furniture à la Donald Judd.

On the whole, it was once again apparent just how effectively Scandinavian and Japanese design are able to communicate with each other when it comes to our present-day perceptions of “simplicity”. We can certainly expect a few (surely pleasant) surprises from the two over the coming years.

Meeting booths for all

Unfortunately, most of the numerous “enclosures” presented as solutions for contemporary offices proved to be on the less elegant side. It all began with the “Alcove Highback” designed by the Bouroullec brothers for Vitra and has now arrived in the North, bringing with it a whole phalanx of “meeting booths” intended to promote office communication. They come in all shapes and colors. And, they’re getting bigger, more cumbersome, and ever more evocative of huge, bulky boxes. Correspondingly, the spectrum ranges from well-designed systems such as “Area” (Lammhults) to enormous cabins with interior lighting (as seen at Buzzi Space) and upholstered versions in leather (metalmobil) to closet-like pieces such as “mute” by Horreds. Whether modern man (since he has been sentenced to partake in constant, unceasing communication) really longs for a cave-like retreat is one thing, but that every single manufacturer feels the need to offer something in this direction is something entirely different. Office culture seems to be exploring some rather strange avenues.

You take the old, you make it new

It really is astonishing to see how quickly prevalent lifestyles, even those from the very recent past, simply disappear. On the one hand, they are sucked up by the media and its devouring effect like a vacuum cleaner sucks up dust. On the other, more and more people are withdrawing to the past, eschewing the desperate quest to find escape in a fictional, idyllic world as portrayed by the media every single day. As a result this quest for viable, sustainable options, while seeking to preserve established principles and simultaneously not become complacent in the race to be the newest, the most cutting-edge, is becoming more and more intense. If the future really was seeking to abolish all vital differences nurtured by tradition, despite complaining about it often enough, I’d rather stick to the colorful diversity of our present age, thank you. Especially when it’s presented with the friendly, laid-back attitude the Scandinavians do so well. 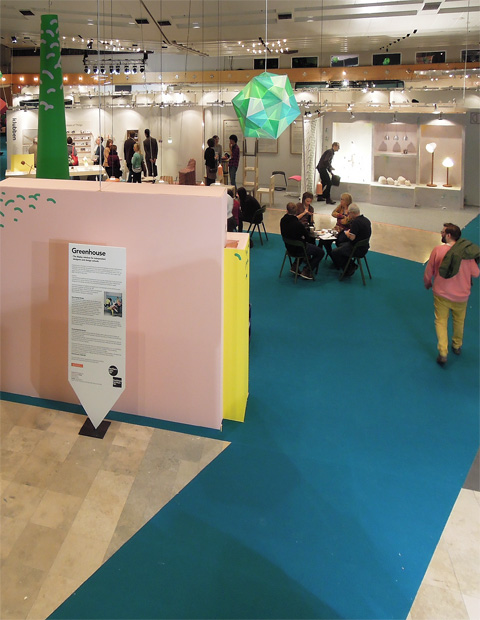 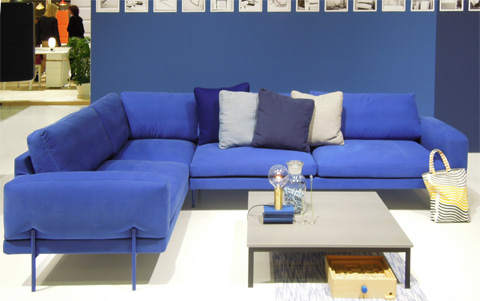 At many stands, the visitors could marvel at colorful furniture. Photo © Thomas Wagner, Stylepark 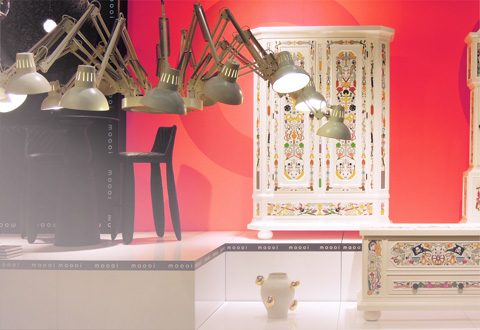 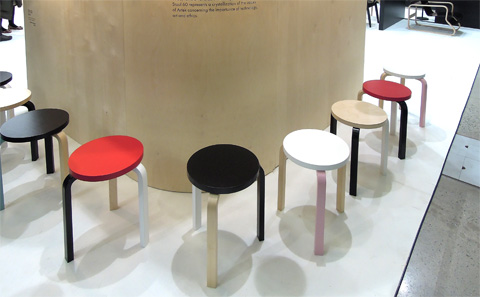 In celebration of the 80th birthday of Alvar Aalto’s “Stool 60”, Artek wooed the public with a new version boasting colored seats designed especially for the occasion by Mike Meiré. Photo © Thomas Wagner, Stylepark 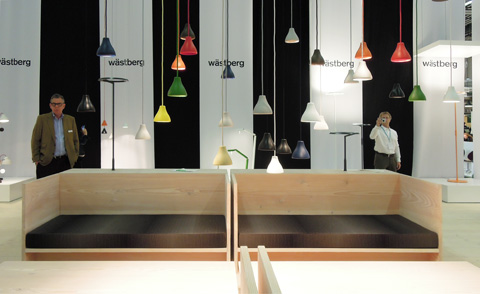 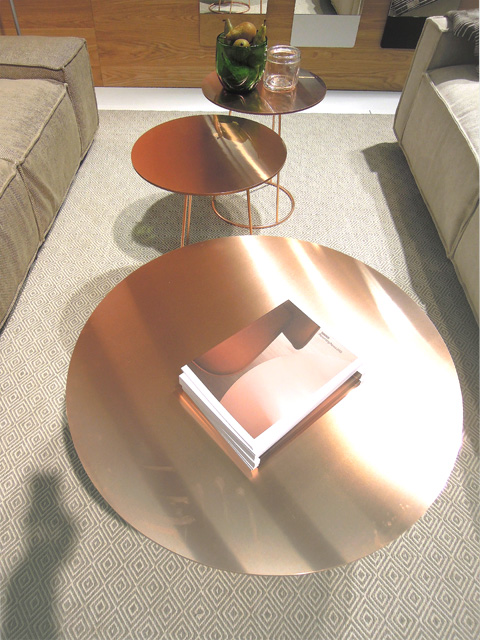 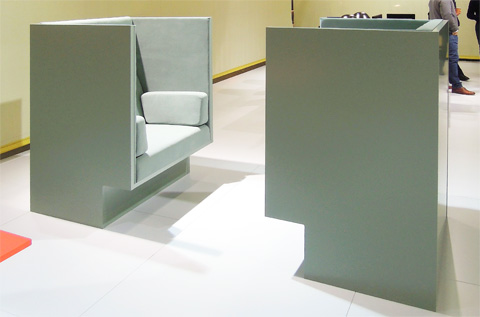 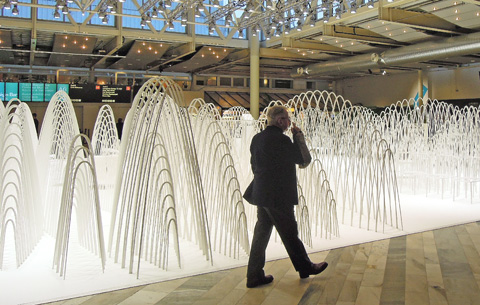 The architect Oki Sato, the Guest of Honor at this year’s fair, transformed the entrance hall into a huge artificial garden in white-lacquered metal. Photo © Thomas Wagner, Stylepark 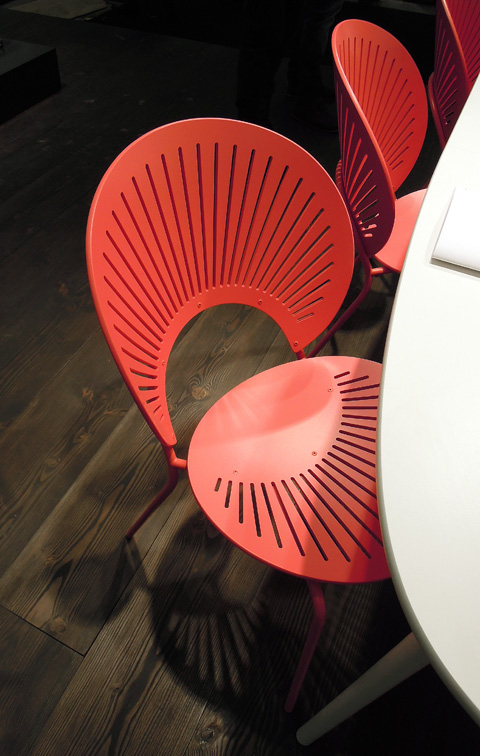 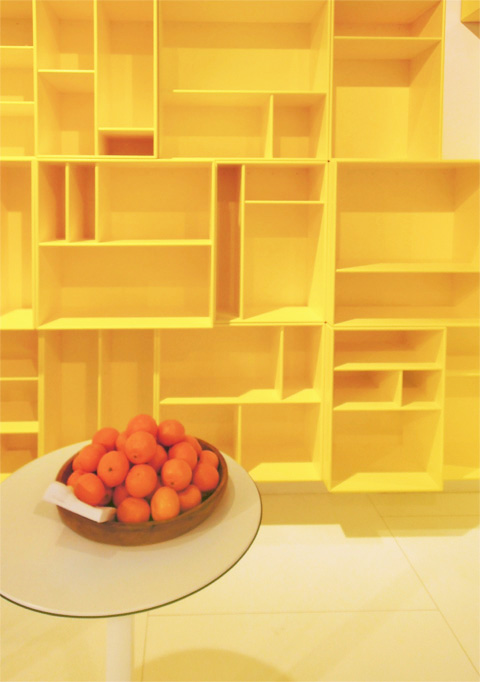 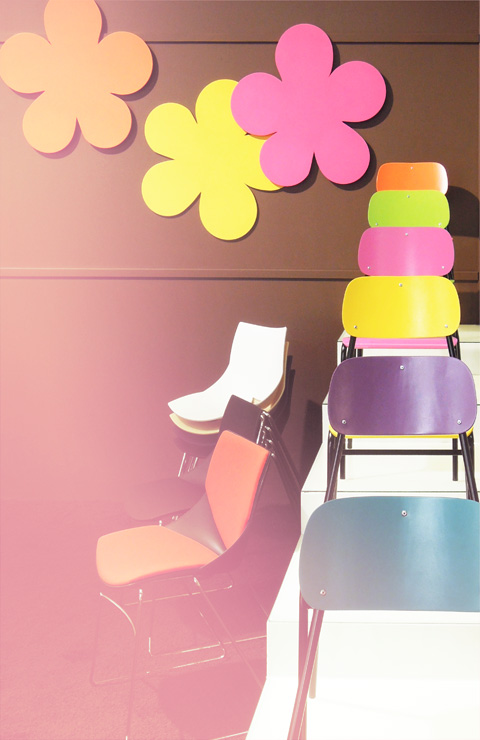 At Skafab, the visitors discovered many flowers in bright and shiny colors. Photo © Thomas Wagner, Stylepark 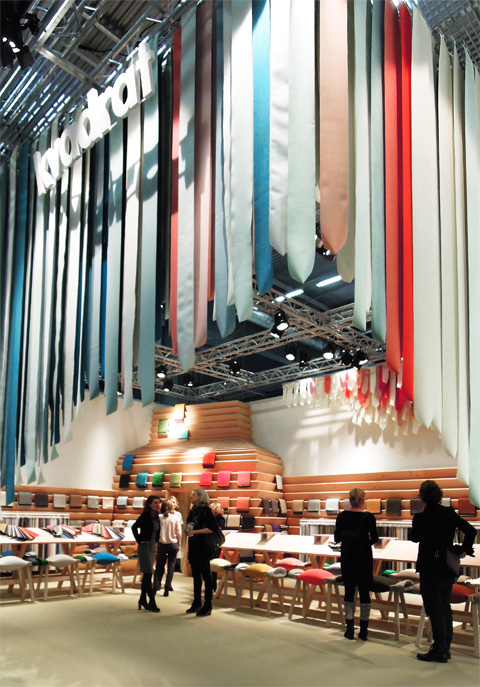 The textiles by Aggebo & Henriksen and Satu Montanari for Kvadrat were put in scene by Raw Edges Design Studio. Photo © Thomas Wagner, Stylepark 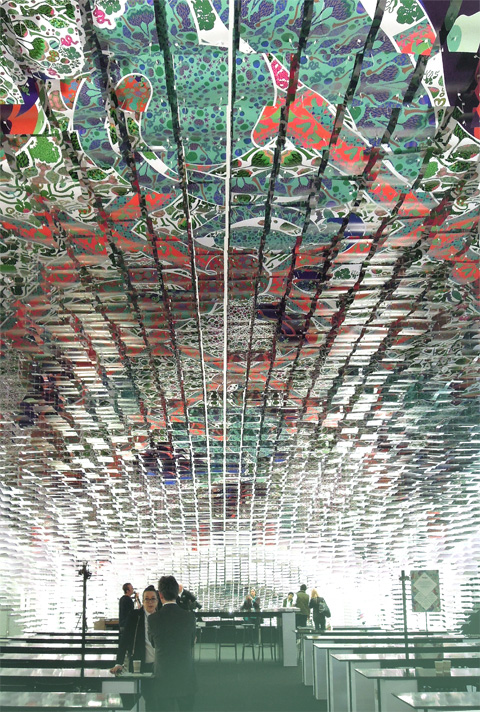 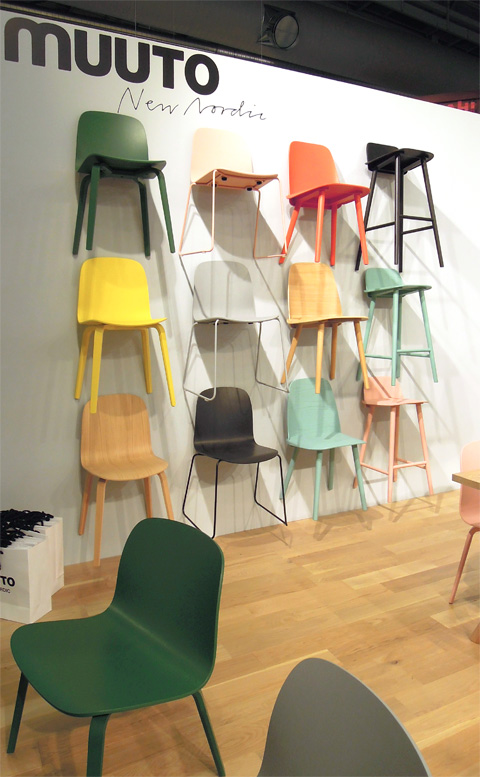 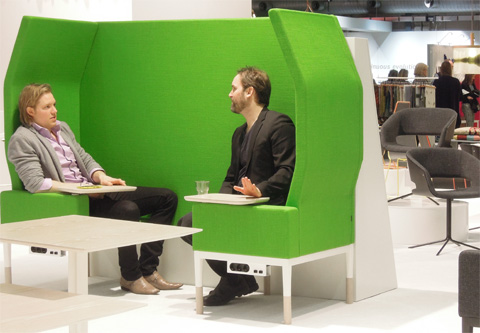 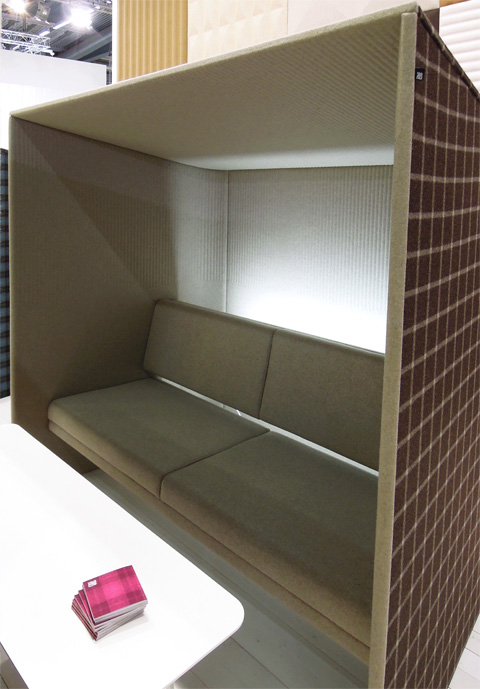