Highway churches are basically nothing more than wayside chapels, like those that once dotted trade and transport routes. Today, though, in the rush of flowing traffic, people don’t simply stop to devote themselves to their spiritual wellbeing or to say a prayer or two. This applies even where there is a small road sign bearing a silhouette of a traditional village church, which indicates that drivers don’t need to rely on an empty tank as a reason to make a stop. So these spiritual places often exist in a symbiosis of greater or lesser effectiveness with the usual business that takes place along freeways – reflecting the pious hope that after satisfying their more earthly needs, travelers will also do something for their spiritual wellbeing.

Yet all too often, in the melee of fast-food restaurants, gas stations and gaming halls, the place of quiet retreat that is the highway church escapes the attention of resting travelers. In order to stand out in this conglomeration of functions, what is required is a simple yet meaningful architectural language that is as hard to overlook as the great golden “M” of the famous fast-food chain. What could be more appropriate for such a task, then, than the pictographic “symbolism” of those road signs? At least that was the idea behind the design by Schneider+Schumacher. So now, on top of a hill along the A45 highway, an oversized version of just such a church silhouette calls out to travelers with unmistakable directness, immediately recognizable from those road signs. What’s more, the radiant white silhouette of the church is visible from both directions.

However, anyone expecting the simplistic semantics of a two-dimensional road sign to characterize the entire building and be reflected in it is in for a surprise. Between the two symbol-like church silhouettes stretches an oratory of profound architectural complexity. Its edges and folds are created by the interplay of the two silhouettes, but also by its positioning on the plot and the topography. The bridge, which extends from the church like a beam of light and stretches to the service station, marks the entrance. It almost seems to want to draw visitors into this place of stillness with this gesture.

Angular outside, organic inside

When you enter the oratory, you’d be forgiven for feeling like Alice in Wonderland: You pass through a simple door, behind which lies another world. While the outside of the building is angular, clear-cut and in brilliant white, its interior surprises with an open wooden framework. Built using a delicate wooden rib structure, its organic lines create a warm, almost soft ambiance in the room. This gentle atmosphere is enhanced by the indirect light that falls into the room from the tops of the two steeples. This way, the church’s interior, a cave-like space made of OSB wood, is a complete contrast to the functional buildings that surround it, shielded as it is from the rush and noise of the highway.

Schneider+Schumacher’s highway church definitely has something prototypical about it. Due to their function and the franchise basis of the companies that run them, service stations often have a certain self-similarity about them, so it would surely not be overly bold to suggest that this typology might be repeated for contemporary wayside chapels at other services stations. The basic “cut-out-and-keep” style template is already in place. And the idea of transforming the two-dimensional church symbol of road signage into a three-dimensional spatial concept follows the logic of this location in a consistent way: Regardless of which highway you’re on, you’ll always see and find the same things, so why not the same model of church? At the end of the day, what is needed is indeed a convincing – but not necessarily always different – spatial concept to find a place of stillness amidst the roaring traffic. 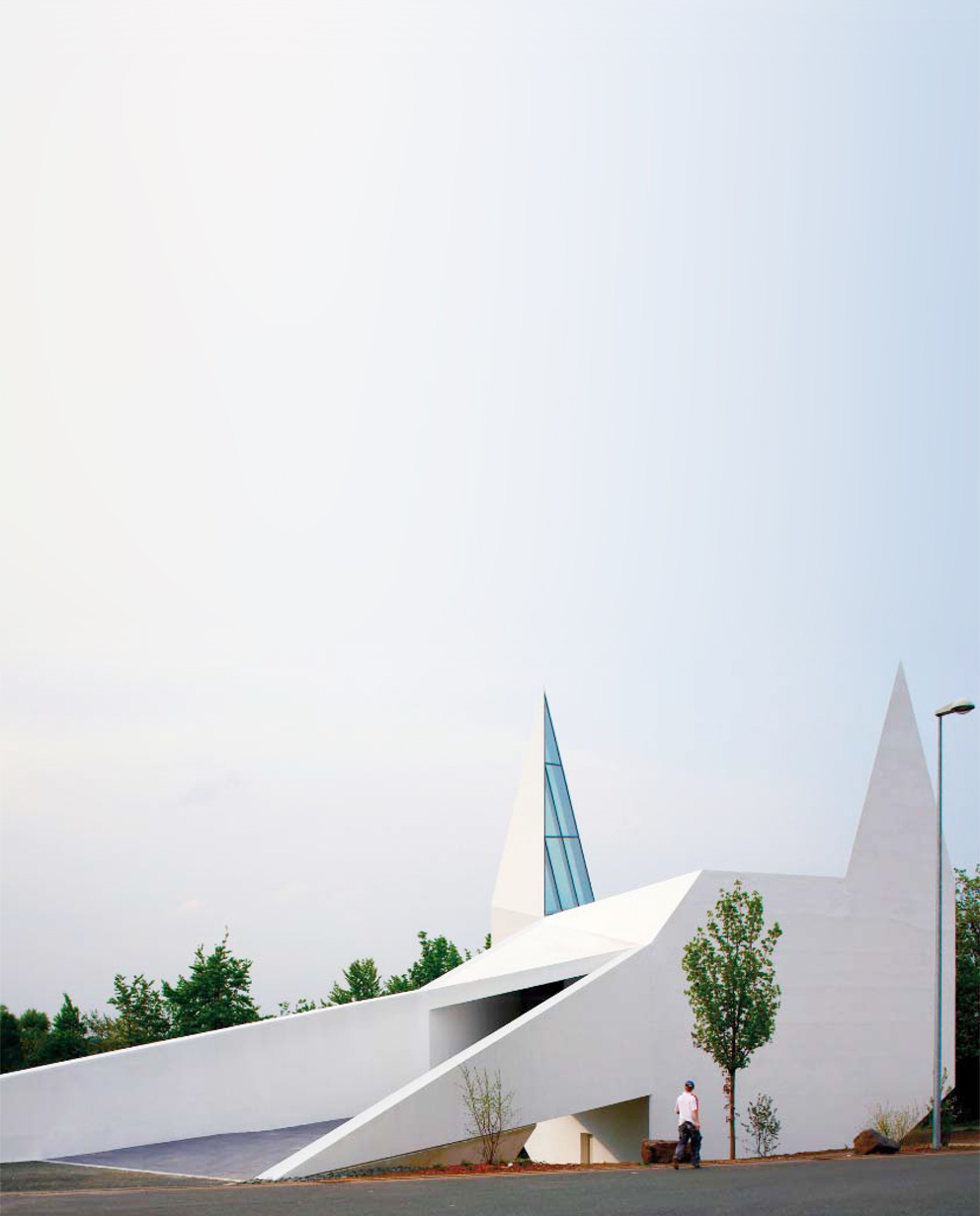 From 2D to 3D: Between the two symbol-like church silhouettes stretches the oratory. Photo © Helen Schiffer

From 2D to 3D: Between the two symbol-like church silhouettes stretches the oratory. Photo © Helen Schiffer 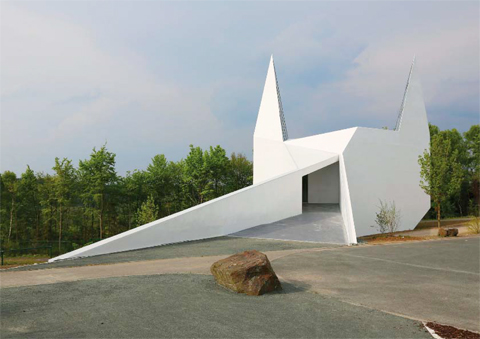 Also a superhero like Batman would have liked the church... Photo © Helen Schiffer 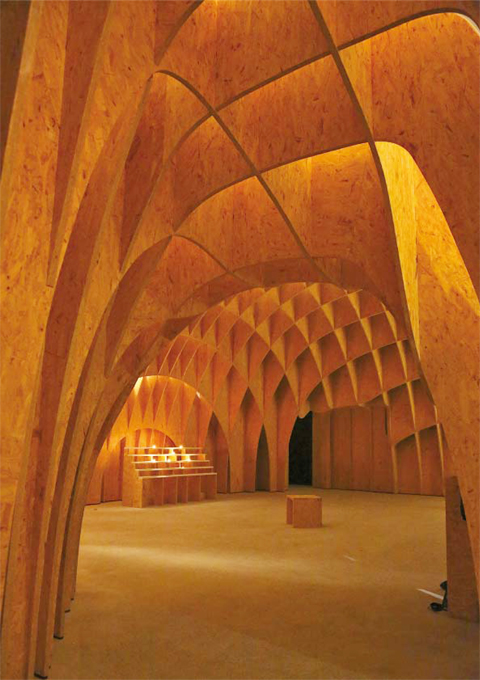 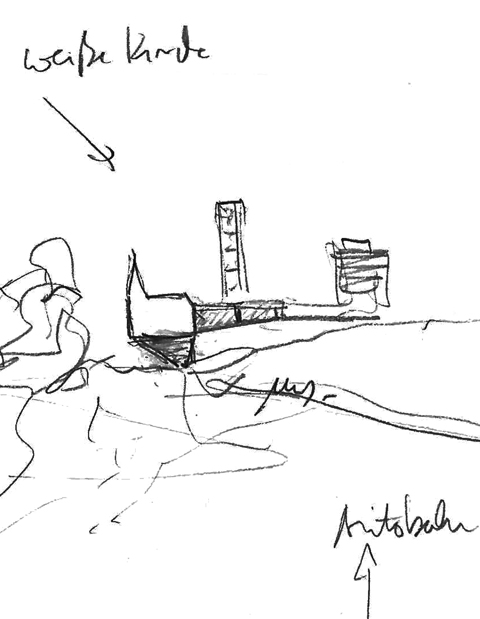 The sketch brings the design idea to the point: you need a simple yet meaningful architectural language to assert itself in places of past rush. Drawing © Michael Schumacher 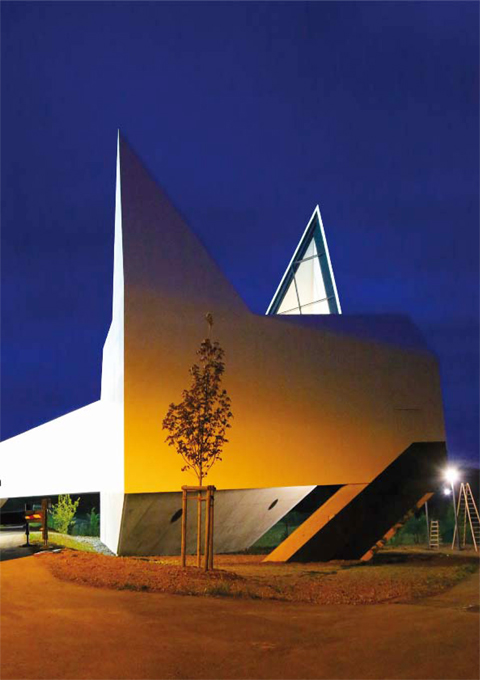 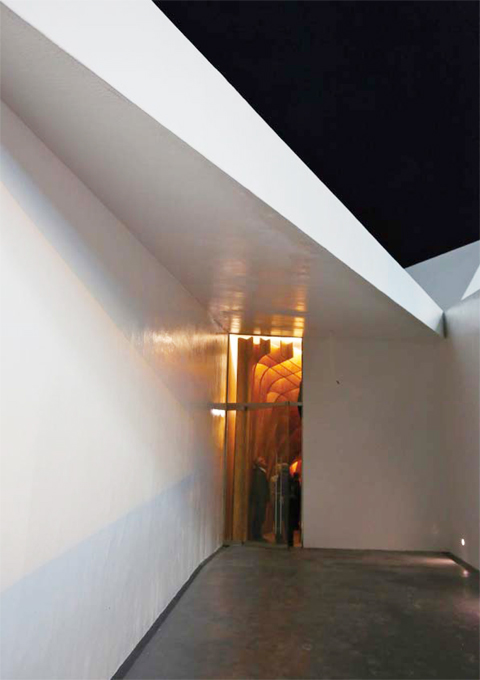 The door to place of stillness: the appearance of the church is angular and clear-cut. But inside the building offers an organic space. Photo © Helen Schiffer 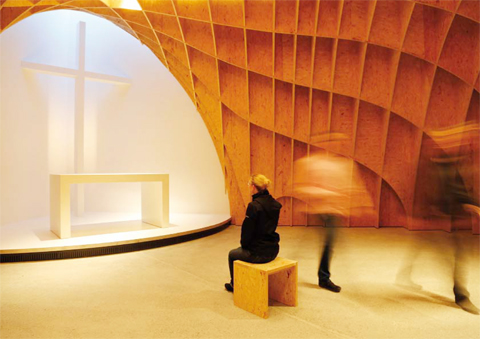 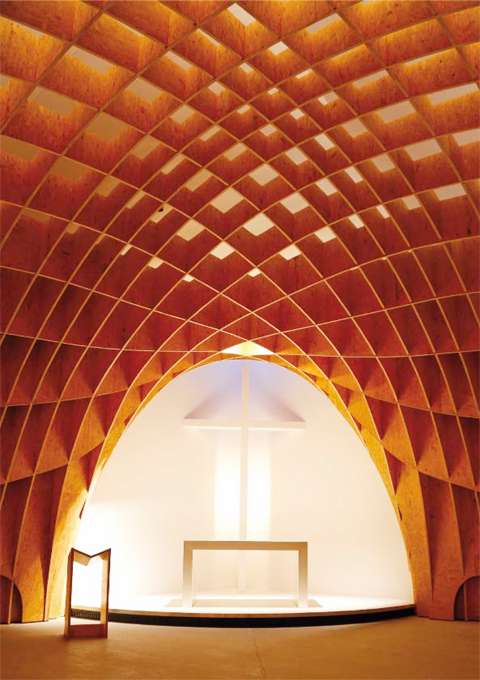 The wooden rib structure was as well prefabricated as the complete wooden framework of the building. Photo © Helen Schiffer 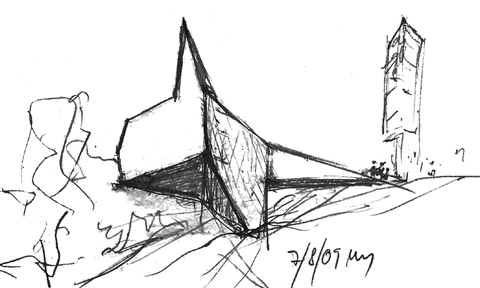 As a billboard rises the church of landscape. Drawing © Michael Schumacher
Advertisement