top
A healer of souls with head and heart
by Annette Tietenberg | Mar 26, 2016 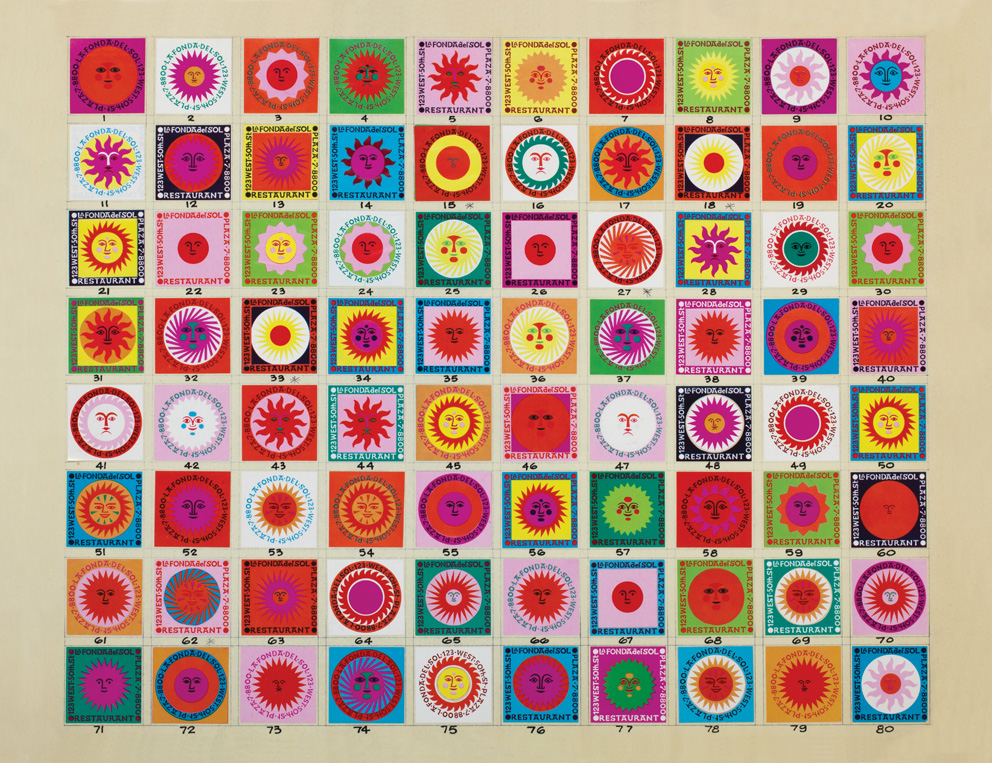 The sun is one of Girards most appreciate motive: Design for matchboxes. Photo © Alexander Girard Estate, Vitra Design Museum

Following exhibitions on Charles and Ray Eames, Isamu Noguchi and George Nelson, Vitra Design Museum is now presenting a retrospective on another designer, who for decades influenced the product range and corporate identity of furniture maker Herman Miller. To date, Alexander Girard (1907 to 1993) has very much remained the mystery man in this chapter of design history, but that all looks set to change.

Some 20 years ago the relatives of the American interior and textile designer bequeathed his private estate to the Vitra Design Museum, or rather its then chairman, Rolf Fehlbaum, and the first museum director Alexander von Vegesack. Since then over 5,000 drawings and 7,000 photographs, not to mention textile samples, notes, sketches, letters and objects that had accumulated in the Santa Fe studio up until Girard’s death in1993 have been carefully researched, catalogued and an inventory prepared. And now the time has finally come: The excellent exhibition “Alexander Girard. A Designer’s Universe” invites visitors to admire all the treasures waiting to be discovered in the archive – as most certainly does the catalog comprising over 500 pages and designed to make pleasant reading and featuring insightful essays as well as a comprehensive list of works.

Indeed, a veritable universe unfolds. The journey begins with maps, coats of arms, flags, stamps, bank bills and documents in a special secret language Girard conceived as a school pupil during World War I, which he spent as a boarder in England, for his imaginary place “Celestia”, also known as “Republic of Five” We continue past carefully labeled files and boxes containing fabric samples, past chairs, armchairs, china and napkins and the logo of the airline Braniff International. The journey ends in the middle of an overflowing collection of masks, Christmas cribs, doll’s houses, and shadow puppets from all over the world that Girard bequeathed to the International Folk Art Museum in Santa Fe. By presenting as heterogeneous an image as possible the exhibition not only familiarizes visitors with Girard’s “works” in the traditional sense, but also with his playful, whimsical beginnings and his diverse multi-ethnic sources of inspiration.

Alexander Girard can most certainly be considered a cosmopolitan and an polymath. He was at home equally in Europe and in United States, traveled in Central and South America, India and Japan, the Lebanon, Syria, Egypt and Turkey, was active as interior design, textile designer and exhibition curator. For a designer he seems to have been remarkably lacking in vanity. Given his career moves, his clients and his preference for working in different teams, one can assume he placed greater importance on delivering consistent results than on taking the limelight.

In the catalog, curator Jochen Eisenbrand quotes a source from 1962 that describes Girard as a “healer of souls” since fate granted him the pleasure of so cleverly making selections from among objects, colors, textures and surfaces that they automatically exuded a sense of wellbeing. Owing to his passion for collecting and a childhood spent partly in Florence his friend Charles Eames said of him that he was “part magpie and a Florentine one at that” adding that “there is perhaps no designer of our time more concerned with the selection of beautiful things and their relationship to our environment than Girard.” 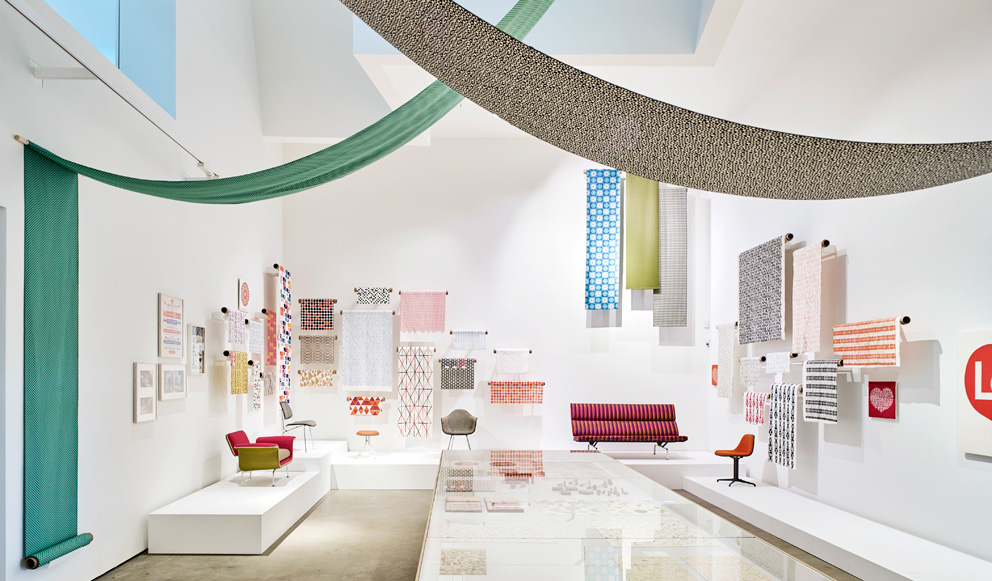 Born 1907 in New York, Alexander Girard, known simply as Sandro, grew up in Florence where his parents had an antiques business. After completing his studies at the School of Architecture in London, presenting his own designs at the World Exhibition in Barcelona, and a job as a designer at the Nordiska department store in Stockholm he graduated as an architect from the Scuola reale di architettura in Rome, worked in Paris for architects John W. Chandler and then, in 1932, opened an interior design planning office in his native New York City. Following further studies at New York University he was allowed to call himself a registered architect and mark his designs with a stamp to that effect. In 1943 radio manufacturer Detrola in Detroit commissioned him with designing a new canteen and was so pleased with the result that he was offered a position as chief designer. Girard accepted the offer, moved together with this wife Susan to Grosse Pointe, a suburb of Detroit, and also opened his own design studio there, where he began to experiment with the material plywood. Not surprisingly he soon ran into Charles Eames and Eero Saarinen, who were studying in nearby Bloomfield Hills at the Cranbrook Academy of Art

Considering him a guarantee of “good design”, the Detroit Institute of Art commissioned him in 1949 to conceive the exhibition “For Modern Living”. It was followed up 1950 by his designing the traveling exhibition “Design for Use, U.S.A.”, which the Museum of Modern Art sent on tour through the whole of Europe. A year later Girard accepted the proposal of Charles Eames and George Nelson to become director of the newly-founded textile department at furniture manufacture Herman Miller. Here he had the chance to design those breathtaking patterns that are still so highly coveted today and have been embraced and advanced by textile designers such as Paul Smith and Hella Jongerius.

While textile artists like Anni Albers and Gunta Stölzl, who had trained at the Bauhaus, sought at that time to show the material qualities of woven fabrics to advantage, Alexander Girard interpreted textiles wholly in the sense of Gottfried Semper’s theory of metabolism – as a raw material. He had the fabrics printed, concentrated on geometric patterns, was guided by the clear contours of Henri Matisse’s cut-outs, and employed vibrant, highly contrasting colors, whose dissonant combinations such as magenta and orange were considered “impossible”. 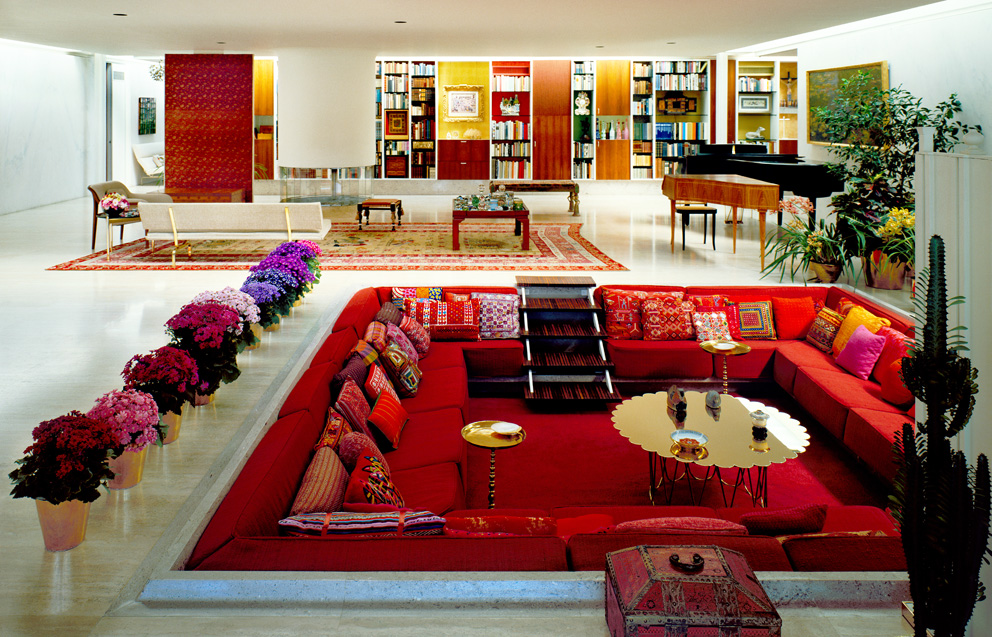 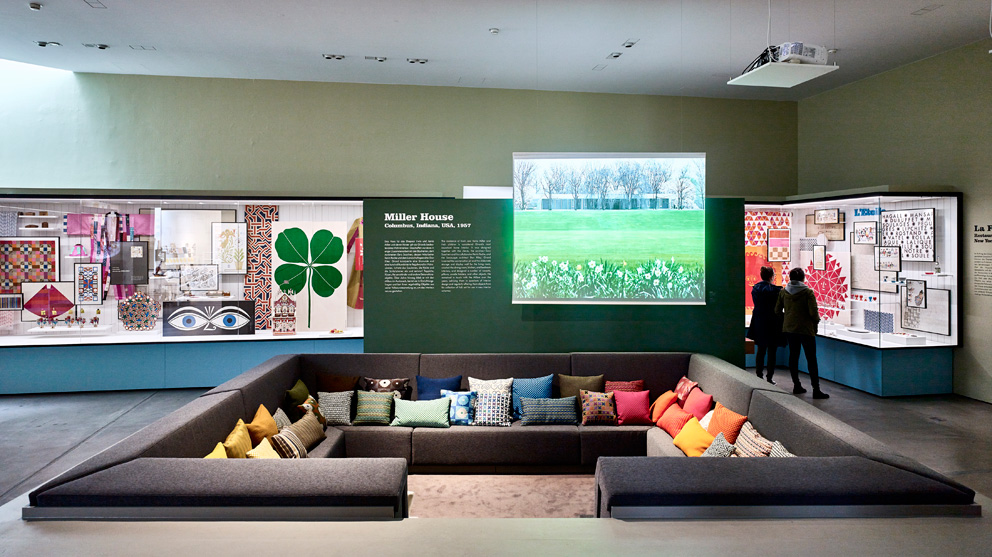 Alongside sample books and stamps, the exhibition also includes the fabrics themselves in the guise of furniture covers, murals and banners of hanging fabrics. It also boasts a specially made replica of the elegant conversation (sofa) pit Girard designed for the Irwin and Xenia Miller House in Columbus, Indiana. Committed not so much to fixing an ideal state, but rather to encouraging élan vital Girard coaxed the house’s occupants to change the covers and cushions in the sofa pit to suit the season, light and their mood.

In order to create what he felt was the necessary cultural context he also drew up for his client a list of suitable items that were to be place on the shelf, and thus in view of the sofa. The objects came from 44 countries, and included crafts objects made by the Amish, a wall clock in the French land house style, Native American Hopi dance sticks, birds of Murano glass, an oriental lute, and small English box with marble inlay work and Mexican milagros of tin. In his acceptance speech for the Elsie-de-Wolf Award in 1966, Girard expressed the principle he followed when furnishing his interiors: “Alongside love, reason is the most important ingredient when designing a home (...) and both together should result in ‘appropriateness’.” 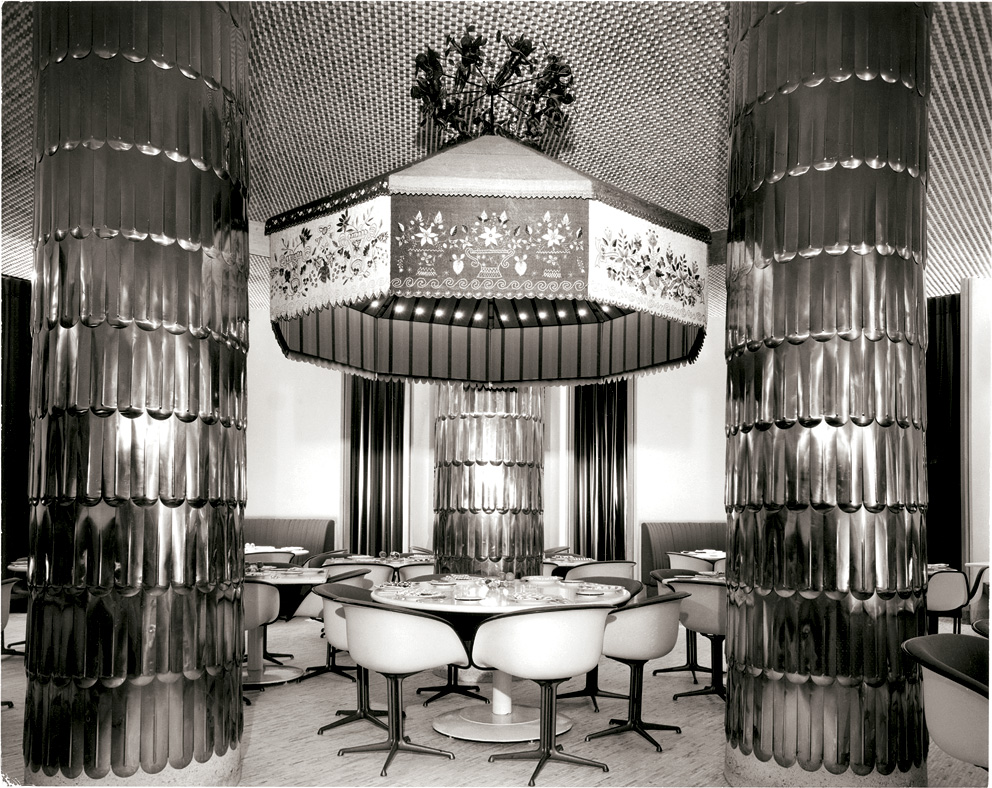 Be it as an interior designer of houses or New York themed restaurants such as the “La Fonda del Sol” lit by a pseudo-Aztec sun disc and French haute-cuisine temple “L’Etoile”, which looked so futuristically cool it could have served as a model for the Arpel family’s house in the movie “Mon Oncle” by Girard’s contemporary Jacques Tati, Girard the scenographer always succeeded in creating places where narrations could unfold. For example for the administration building of agricultural machinery maker John Deere in Moline, Illinois, he designed a 60-meter long mural inspired by hundreds of found objects and pictures. Screws and tools, advertising elements and photographs illustrate the company history – from the development of the first steel plow until the start of tractor manufacture.

The timing of the retrospective could not have been better. After all, Alexander Girard’s collage principle is once again very much in fashion, succeeding as it does in breaking both with the ideology of the ‘new’ that underpinned Modernism, but also with the indifferent anything goes attitude of Post-Modernism. In Girard’s pieces, his own designs enter into a harmonious dialog with the found, the glossy new with the signs of use. In his interiors he deliberately includes references to different epochs and geographical regions. Such a discursive network refers less to the designer and more to the collector, who can call all these trophies of cultural appropriation his own. Anyone who furnishes their home with such objects will have an appreciation for the hybrid, indeed will be able to decipher the traditions, the transfers, the design and appropriation processes reflected in the objects attest, which have temporarily come together in this interior.
The spirit of a common bond that prevails wherever narrations are voiced has also seized hold of the Vitra Design Museum: Girard’s own grandchildren came especially for the opening, and gave a guided tour of the exhibition. They added fragments of memory to the exhibits on show there in addition to the friendly, hospitable atmosphere that always pervaded the rooms their grandparents lived in. 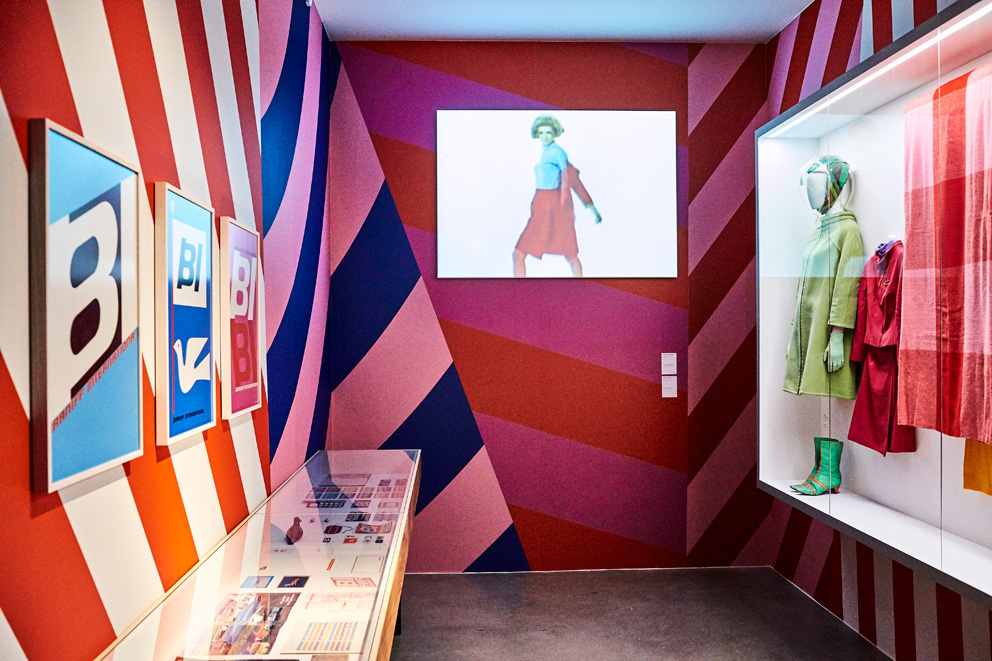 If posters, objects or textiles: Alexander Girard can most certainly be considered a cosmopolitan and an polymath. Photo © Vitra Design Museum, Mark Niedermann 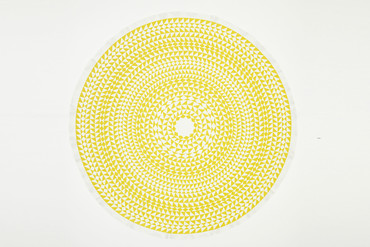 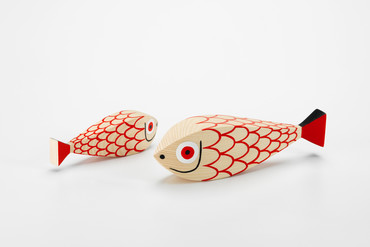 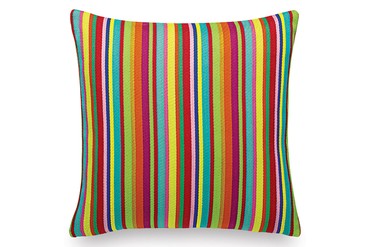 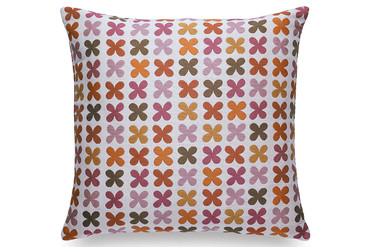