Light+Building or dark thoughts on a light topic

The earth was wasteland, empty. In the days before the Grand Coalition, energy-saving lamps and OLEDs; in fact, at a time when nothing was as overfilled, overloaded and overdone as it is today. And then God spoke, saying "Let there be light" There is something magical bout the fact that slight pressure on a touchscreen enables you to illuminate a room, dim all the lights or even activate the mood lighting in the garden, too. Irrespective of whether we need this, or even want it, which is simply a moot point. At any rate, the light-making industry at "Light + Building" is visibly endeavoring in the Frankfurt trade-fair halls to make certain the light everywhere was comfortable and energy-efficient, and that the medium which renders even the darkest night bright blended with the architecture to set as atmospheric an ambience as possible. Thus, the light flooded, glittered and dripped from casings that were all ingeniously designed, the crystals dazzling, with entire walls and ceilings dipped in different shimmering colors, as if by an invisible hand. Without doubt, the debates on energy efficiency and CO2 emissions and on developing new, sparing and aesthetically appealing lighting technologies have given the sector a real boost. That is to be felt everywhere you turn at the fair. And the designers are doing their utmost to brush away the somber mood of the past from the last of the lamp stores. The age of the light bulb is truly over. The future relies on fluorescent bulbs, LEDs and soon on OLEDs, light can be easily controlled and anyone can use it with great precision for any number of conceivable applications. The face of the brave new lighting world in 2008 can be viewed in the trend niches that stilbüro bora.herke has dreamed up. The scouts believe they have identified four different "personal styles" in today's lamp-land: The one is the "sober mind" fully in high-end trend white; then there's the "boldly modern", a strident urban bedroom, in whose skyscraper-wallpapered "forward power" the luminaires disappear; from the dark refined gleam of "seductive glamour" to the eco-assembly of "vegetal technology", with roofing boards banged together somewhat too smoothly and combined with a heavy leather armchair. For all the upside to trying to view the big picture, but after the end of all styles one could create a quite different collage on the luminaire's contingent present. The insistent identification of trends does not entail such collaging, and the overly artificial paradises (and they are a far cry from reality) unfortunately lack any irony. But then that is provided once again by Ingo Maurer, playfully, narratively and with a lot of fun: His evocation of "Alizzcooper", a veritable snake-lamp made of a black rubber gardening hose-pipe with a poisonously yellow wave along its back. Here there is less meditation on the Fall and more a focus on the future - for example with the phoenix-like lighting object "Early Future" made of rectangular OLEDs straight from the Osram labs. As a "Flying Future", the gleaming diodes form a high-tech variation on the flying carpet of yore, trashing all things kitsch-Oriental in the process. Indeed, old master Maurer once again manages to inject a few cheekily up-tempo ideas into the technoid light boredom in the year of the ubiquitous (and ever larger) semi-spheres, cylindrical panes and rectangular LED cartons. Naoto Fukasawa is a bright mind, who not only developed many pleasantly unpretentious and useful objects for Muji for many years, but like Jasper Morrison addresses the question of when something becomes more than just normal, i.e., "super normal". In conversation, he says that what counts today is not the new, but the better. As there have long since been enough objects, he suggests. "Leia" is the name of his small family of luminaires created for Belux. With a restrained and precise use of design: For example when an opaque, softly glowing double cylinder stretches upwards and the light radiates over the ceiling as if it were exceeding its links to matter. In the case of the smaller version and the table lamp, the shade can be tilted to one side at a single touch, whereupon a built-in halogen spot delivers reading light, too. "Good things," Fukasawa says, who conceives of his luminaires in terms of the user's interaction with the object, "do not catch they eye. If you reach for a beaker to drink you do not think of the beaker, but of what you are going to drink." It would seem obvious that a modest presence is essentially a rarity in trade-fair halls. Here, there is nothing that does not exist, from the huge candelabras for noble banquets to pearled light cascades of chains of rhinestones, from illuminated paving stones to something that looks like a bell and surprisingly goes by the name of "Caravaggio". And what we feared would happen has happened: with a nod to Damien Hirst and his diamond-covered hundred million skull, Fabien Baron has created a small noble skull for the glitter empire of Swarovski: Vanitas in the living room, optionally bright or dark. And with all the chrome-sleek super-kitsch from Rashid through to Murano and all the liqueur-like color/wall/ceiling/illuination/systems one might be forgiven hoping that the future will only belong to the Japanese. Yet, as we all know, there's no accounting for taste. One thing is for sure: There was light! Or should I not say, if I were to follow the approach of super-smart Vienneses cybernetics aficionado Heinz von Foerster: And there was sight?! 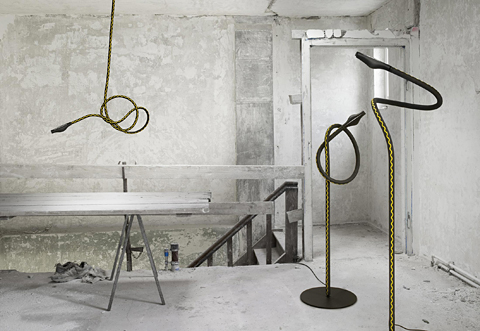 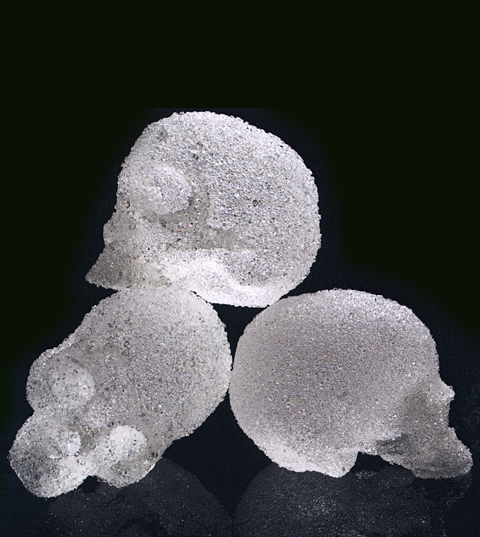 Skull by Fabien Baron for Swarovski 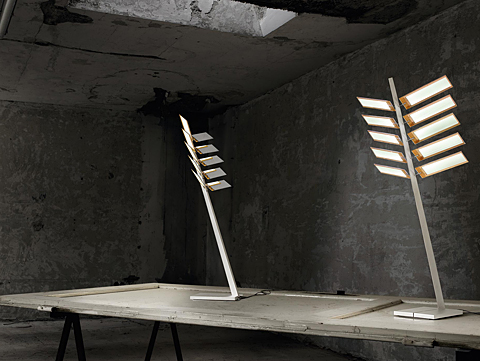 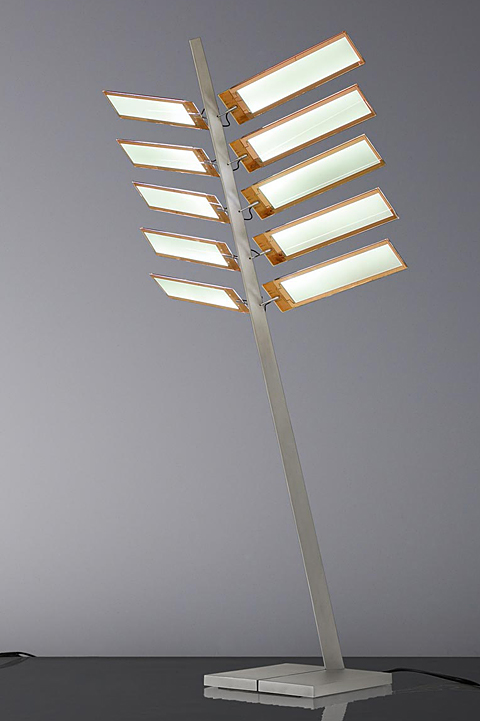