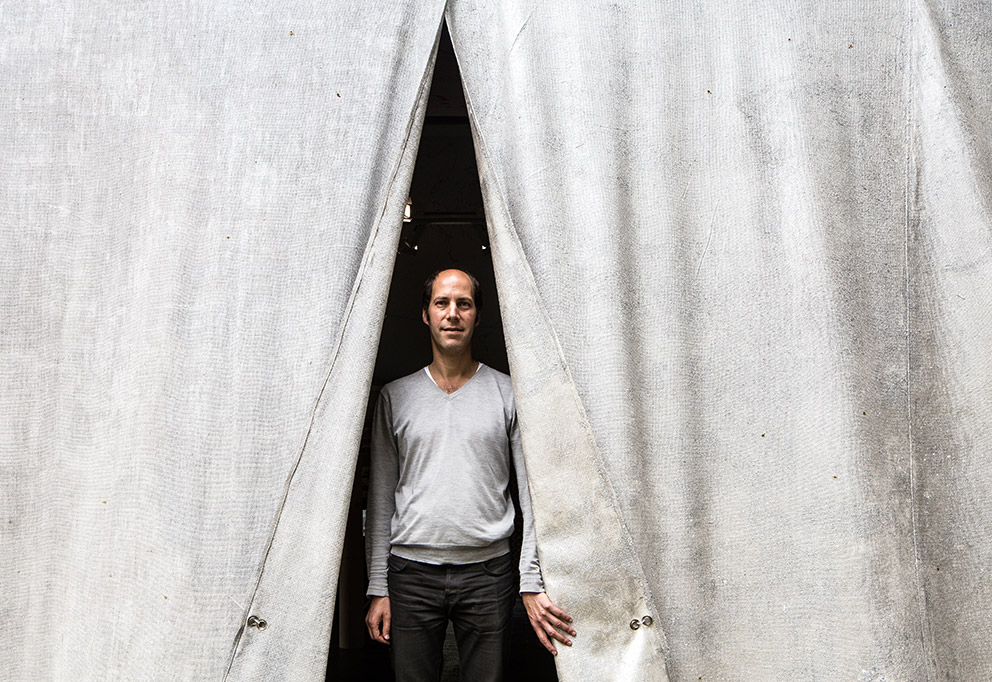 On the small lawn in front of the Central Pavilion at the Giardini stands a pretty silver-gray tent. It is host to one of the most profound contributions to Aravena’s Architecture Biennale. It is the Western Sahara Pavilion, assembled by Manuel Herz in collaboration with the National Union of Sahrawi Women and photographer Iwan Baan, and it is deliberately inserted between the main exhibition and the adjacent country pavilions. Florian Heilmeyer spoke to Manuel Herz.

Florian Heilmeyer: Your contribution is part of Aravena’s main exhibition “Reporting from the Front”, but is not inside but in front of the central pavilion. Why this out-front location?

Manuel Herz: Very important to us was this ambivalent straddling of main exhibition and country pavilions. After all, we call our contribution the Western Sahara Pavilion, but that is not a nation recognized by all. The Western Sahara was a Spanish colony until 1975, and was then occupied by Morocco and Mauretania. This led to a brief war between the Sahrawis and the Moroccans, which culminated in the Sahrawis being driven into exile. The majority fled to Algeria, where they inhabit five relatively large camps directly adjacent to the border. Morocco has since erected one of the most absurd structures of its kind, a mined wall of earth, about 2,500 kilometers long, cutting through the desert and intended to emphasize its claim to the territory. 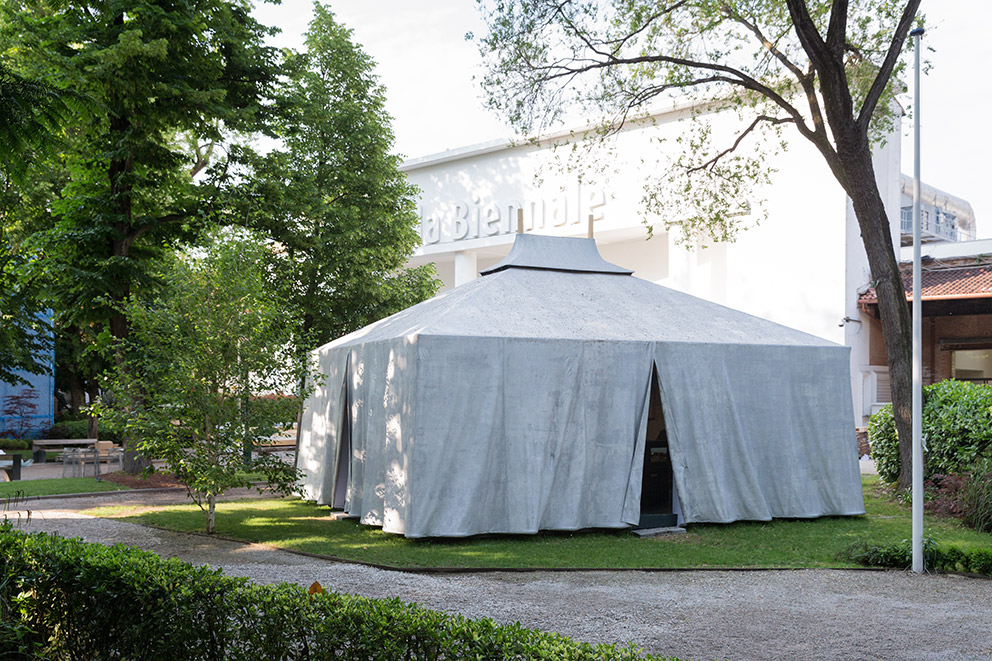 The pavilion stands between the main exhibition and the country pavilions in order to highlight the political situation in the Western Sahara, which has been occupied by Morocco for the last 40 years. Photo © Iwan Baan

And this continues to be the status today?

Manuel Herz: That’s right. The Sahrawis declared the independence of the Western Sahara 40 years ago and are essentially recognized under international law, but they continue to not have access to their territory. The vast majority of the population, about 160,000 people, has been living ever since in refugee camps in Algeria, which tolerates their presence. They live about 40 kilometers away from the mined wall of earth, so we can truly say that here we are reporting “from the Front”. 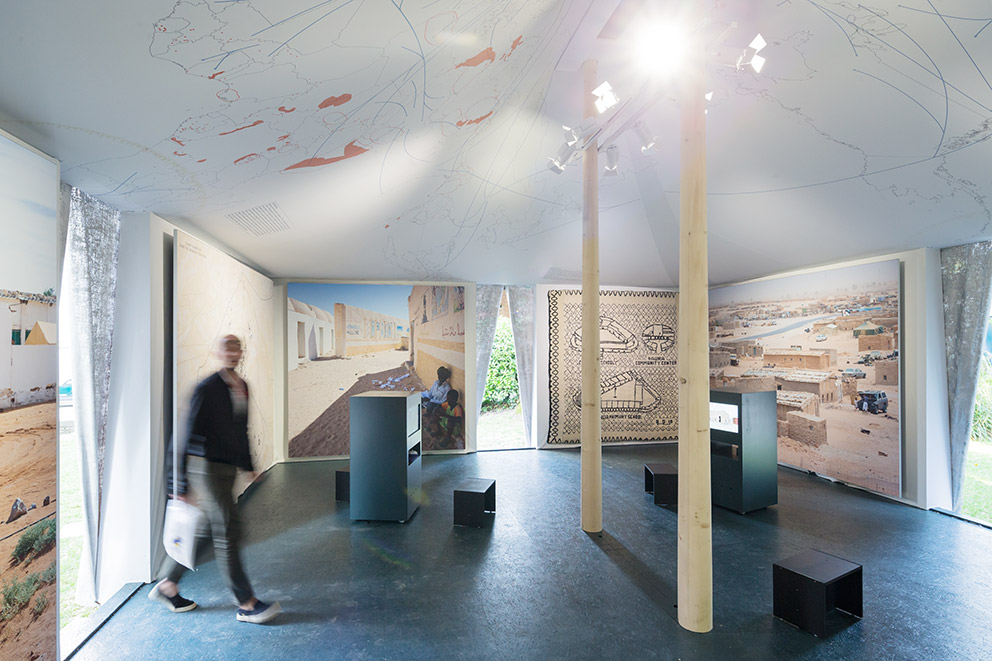 The exhibition inside is very clear and trenchant. The contents are swiftly grasped, and are then given greater depth. Photo © Iwan Baan

In your pavilion you are presenting these five camps and how the respective structures have now become a firm reality.

Manuel Herz: We want to show what everyday life is like in these refugee camps and to what extent the camps are a political and emancipatory project. For Sahrawi society has restructured itself in these camps, has modernized and in part developed fantastic architecture. The Sahrawis govern themselves to a degree that is unique worldwide for an exiled people. They have since converted the first camp in Algeria into an administrative seat of government or capital city as it were. It now includes a parliament building, a foreign and a defense ministry, a national archive, a ministry of education and one for women’s affairs, etc. In Algeria, the Sahrawis have been able to develop a degree of autonomy and largely manage their own affairs. Moreover, these structures, and they are those of a nation state, prepare for the day when the Sahrawis can return to their own country. 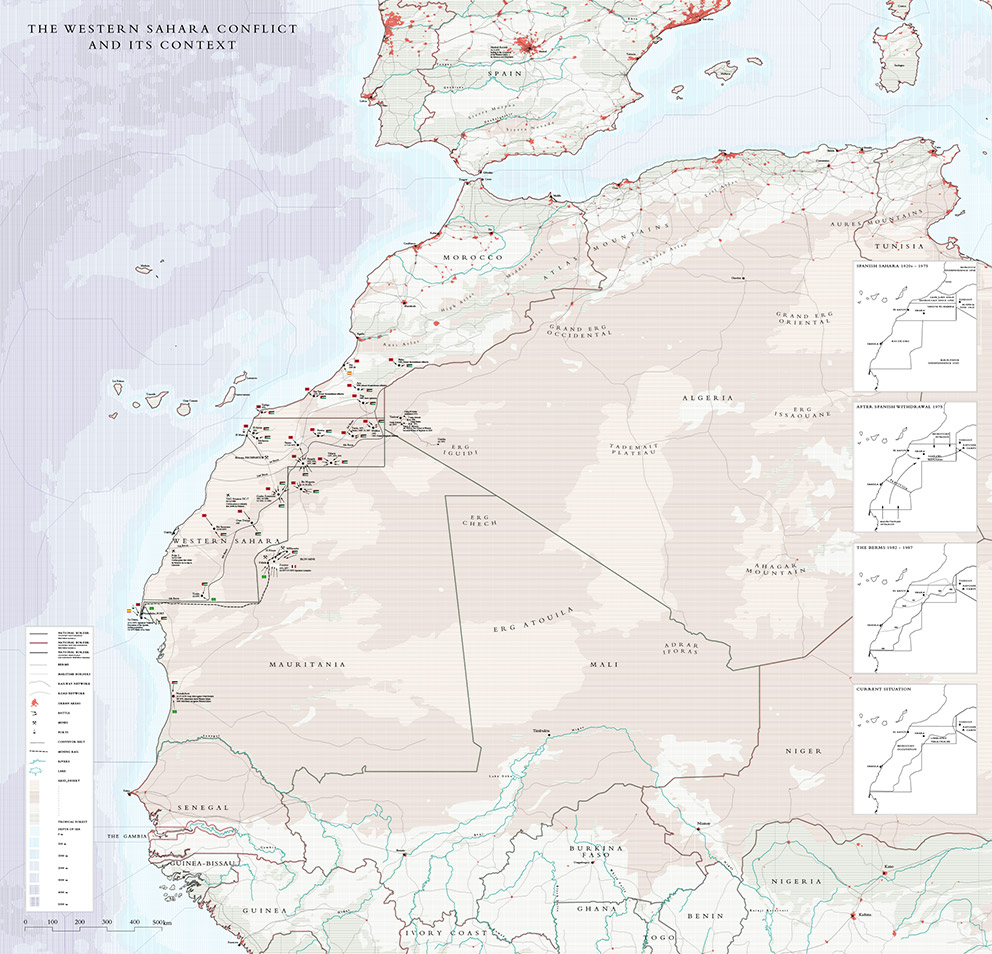 After Spain as colonial overlord withdrew in 1975, Morocco proceeded to annex the lion’s share of Western Sahara and the majority of the Sahrawis were forced into exile.
Map © Manuel Herz, Western Sahara Pavilion

How well does this self-administration function?

Manuel Herz: Absolutely superbly under the given conditions. There’s water, food and healthcare at hand. The Sahrawis have a lower rate of illiteracy, a higher level of education, and a longer life expectancy than all the neighboring regions. Of course there is poverty and disease, but no one starves. Paradoxically, precisely this stability means that a political solution to the actual conflict becomes ever more unlikely, as the more life becomes normal in the camps, the less the political pressure behind the demand that they be allowed to return to their land. It’s a dilemma, and it is one we as architects constantly find ourselves in: Built structures improve life, but at the same time cement this ambivalent political status quo.

You just said the Sahrawi architecture is “fantastic”. Why?

Manuel Herz: Because it is astonishing how high-quality most of the buildings are. We tend to associate the idea of a camp with a temporary state of emergency or a permanent state of squalor, but here that is only the case to a very limited extent. Most of the government buildings are made of cement, otherwise much is built using clay, and in-between there are still tents to be seen. There’s a tradition of very well-made public buildings, such as schools and civic centers, often with rounded corners and circular ground plans as a response to climatic conditions: The wind breezes past and sand does not collect in the corners. I’m sure that an Olgiati would have won many prizes for them, but for the Sahrawis this is simply a normal school building. They possess great design talent in their everyday architecture, and in just about all the houses you find graphic and formal details, ornamentation or paintwork. 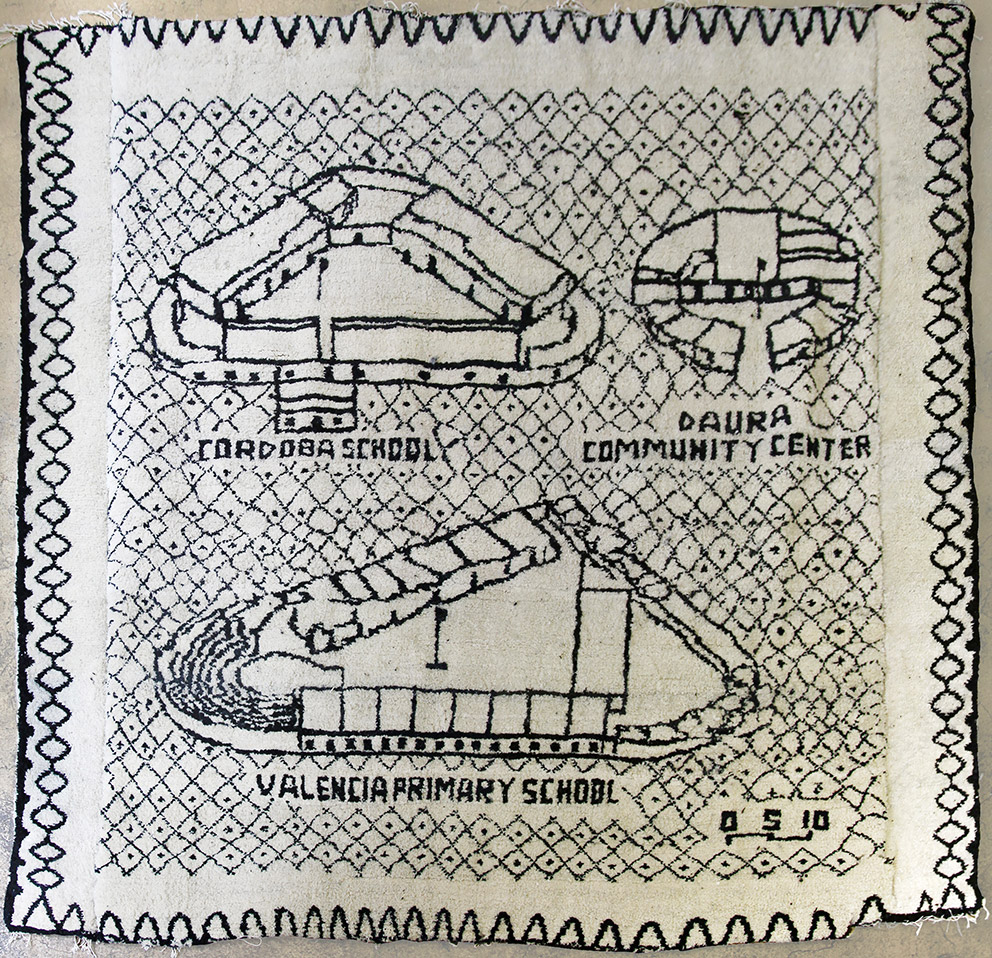 In the course of the 40 years, a remarkable architectural idiom has evolved in the Sahrawi camps, partly for climatic reasons, partly in response to traditional approaches and the range of materials available. Photo © Iwan Baan

The exhibition consists of an open tent with four entrances and inside a very bright and clearly structured space. What can you tell me about the design?

Manuel Herz: As a silver tent, the pavilion represents an almost iconic basic shape. The idea is not to aestheticize the informal, as I would find that ghastly. We want to provide an appropriate space for the proud Sahrawi people and their highly political mission, creating a building that reflects the ambiguity of the entire situation at many levels: The silver skin can have something noble about it or function like military camouflage. The tent is neither only temporary nor only permanent, it is neither traditional nor hypermodern, and the emphasis is not just on minimum effort, but on beauty and aesthetics. These aren’t opposites, but coexist. This simultaneity is also evidenced by the cities/camps in southwest Algeria. 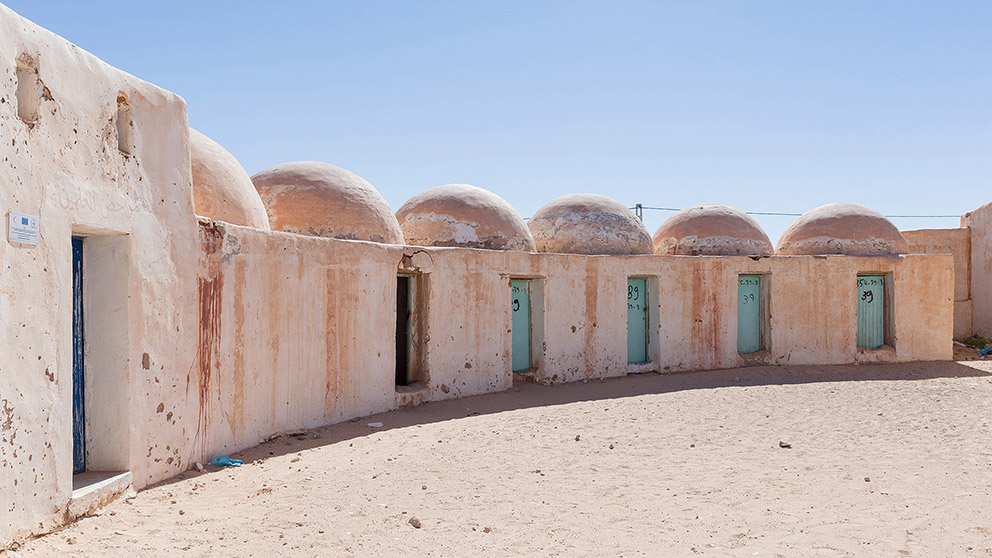 Inner courtyard of the circular Cordoba school at Camp Smara. It is named after the Spanish city whose citizens donated it. Photo © Iwan Baan

On the roof of the tent there’s a map with the major streams of refugees worldwide, but the pavilion focuses on the Sahrawi camps. To your mind, are they a very special or rather a prototypical case of the gradual permanence such camps gain, as can be seen elsewhere, too?

Manuel Herz: Both. I’ve concerned myself with refugee camps in Central Africa for a decade now, and the history of the Sahrawis is of course very special because it is a very homogeneous group of refugees who are very loyal to one another and their political mission. When young Sahrawis leave to study or train somewhere, as a rule they later return to help their community. Among other things, this loyalty makes them so special.

At the same time, this situation is somehow prototypical, above all for us in the Western world. As it shows us that one can have much more confidence in refugees’ abilities and that they can organize some things more efficiently and intelligently themselves and don’t need instructions from us. For me, this camp is part of the proof that this is possible, and no doubt possible in Europe, too. Now, the focus is not on some global patented solution, and of course you can’t transpose the one onto the other completely. We don’t need to irritate the hell out of German rightist politicians and call for Syrian refugees in Germany to set up government institutions of their own. But our pavilion is meant to show that there are different refugee camps and that it is possible to revisit the thinking on how such camps are organized and designed. Hopefully this is food for thought. Which is why I find it so important to present the pavilion here in Venice. 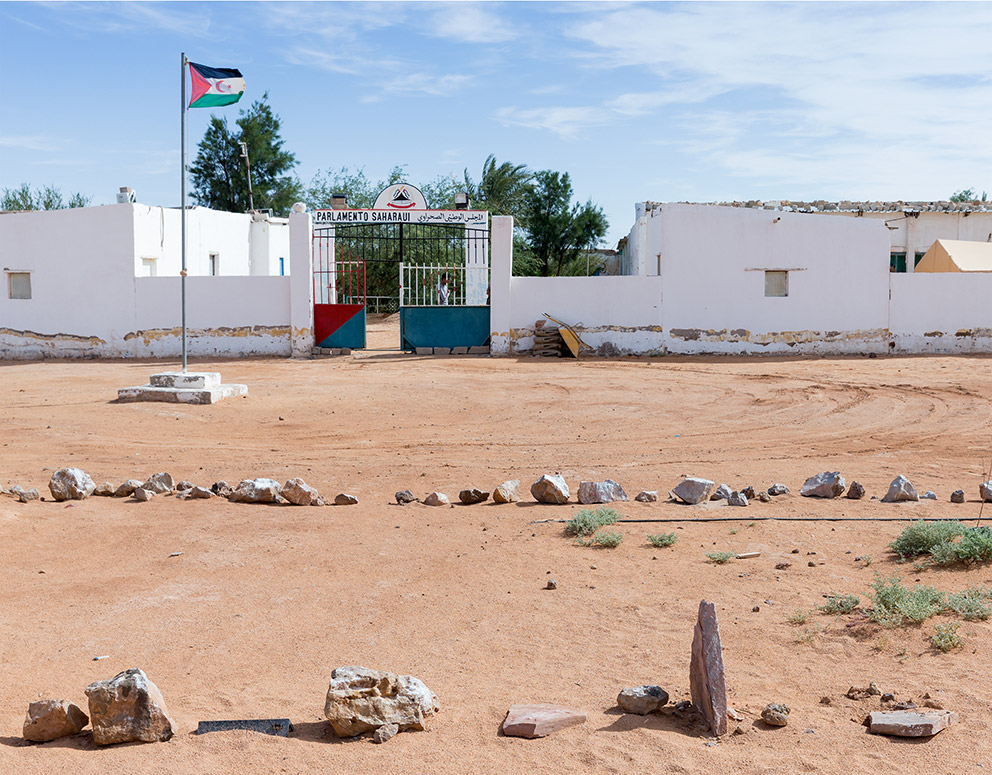 How did the cooperation with the National Union of Sahrawi Women of all associations come about?

On the back of the book and the research for it, I wanted to include the Sahrawis directly in making this exhibition. The National Union offered to take part because it is also something special: Sahrawi women are very emancipated and basically are involved in all aspects of society; there are female artisans and mayors. This evening the Chairwoman of the National Union, Fatma Mehdi Hassan, and she is also a member of government, arrives and will be here for two days. Arranging such trips is not easy and I am very happy about this, especially as she is such a strong and interesting woman. During the day she confers with ministers and ambassadors and in the evening she cooks a super camel goulash for her family. 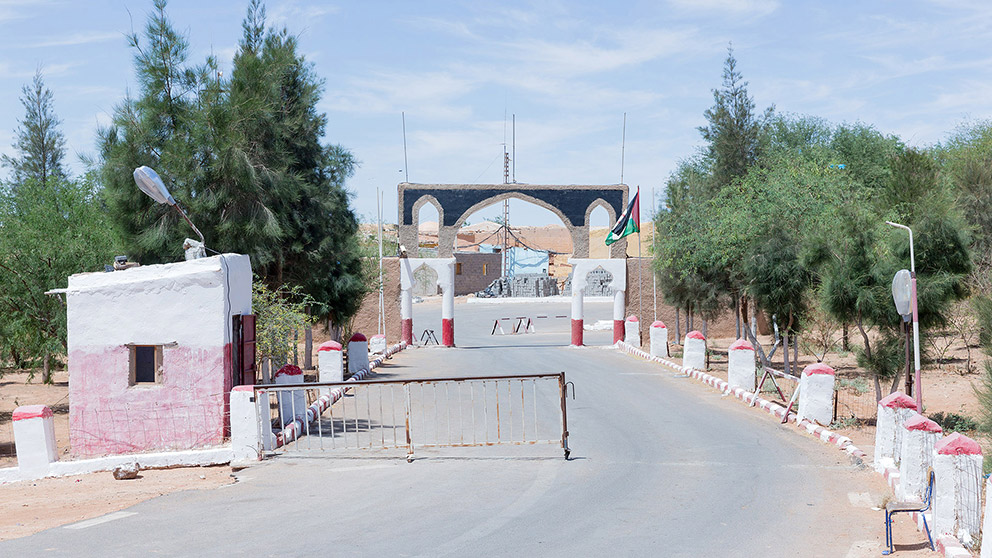 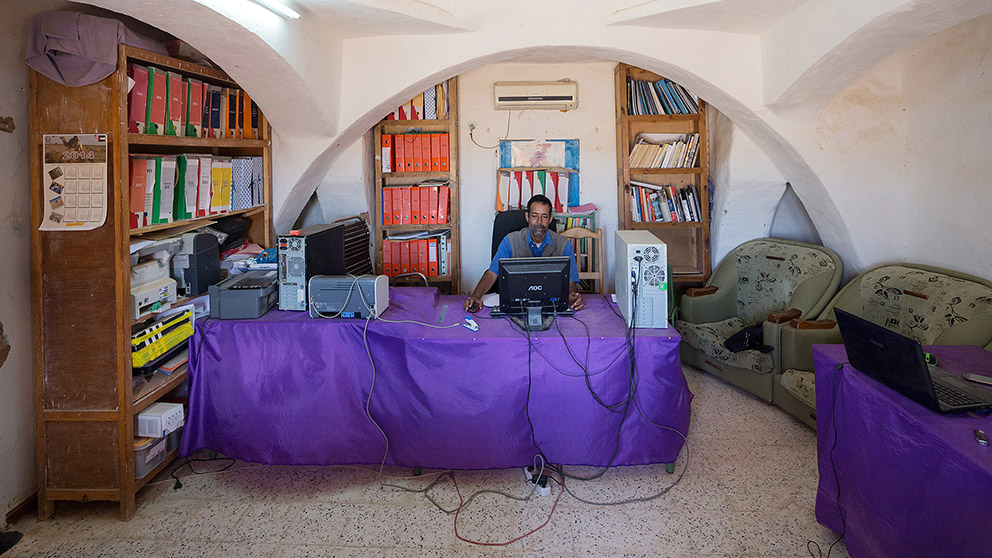 Office inside the Ministry of Building in Camp Rabouni. Photo © Iwan Baan 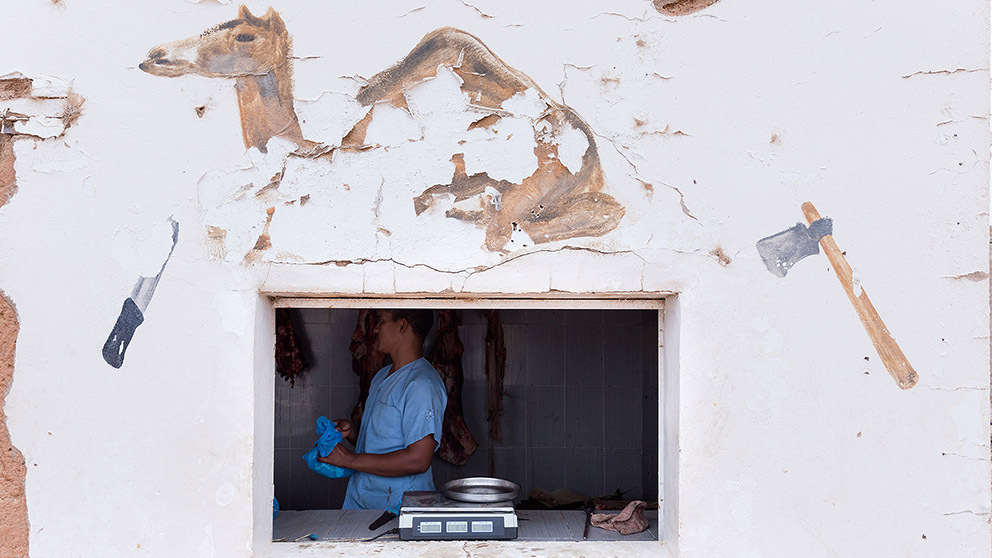 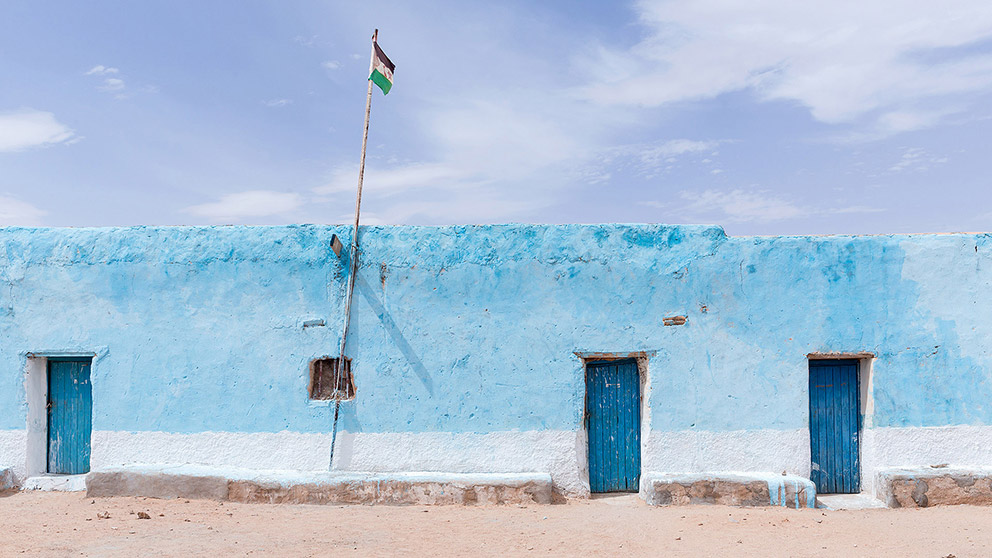 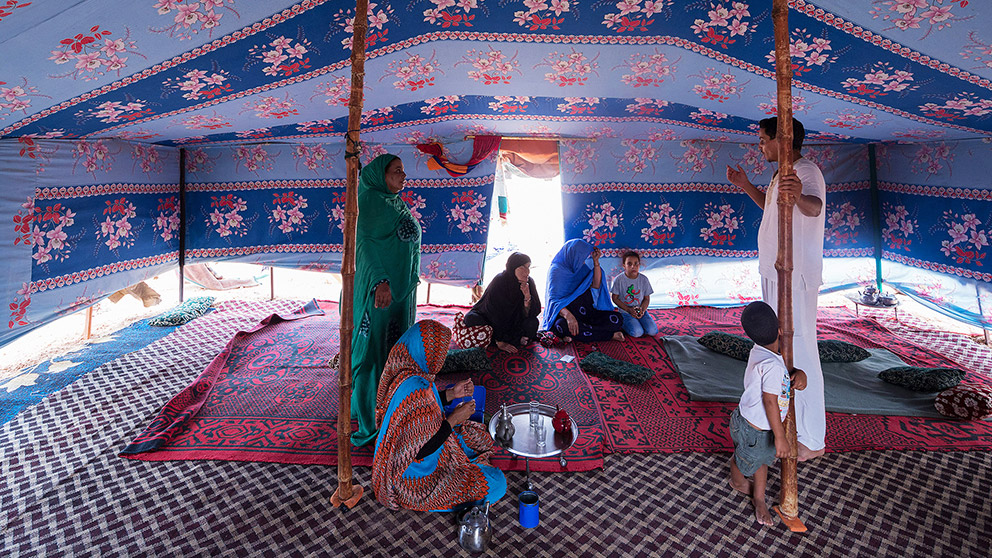 Tent in Camp El Aiun. The tens are important extensions to the houses and not temporary structures. Photo © Iwan Baan 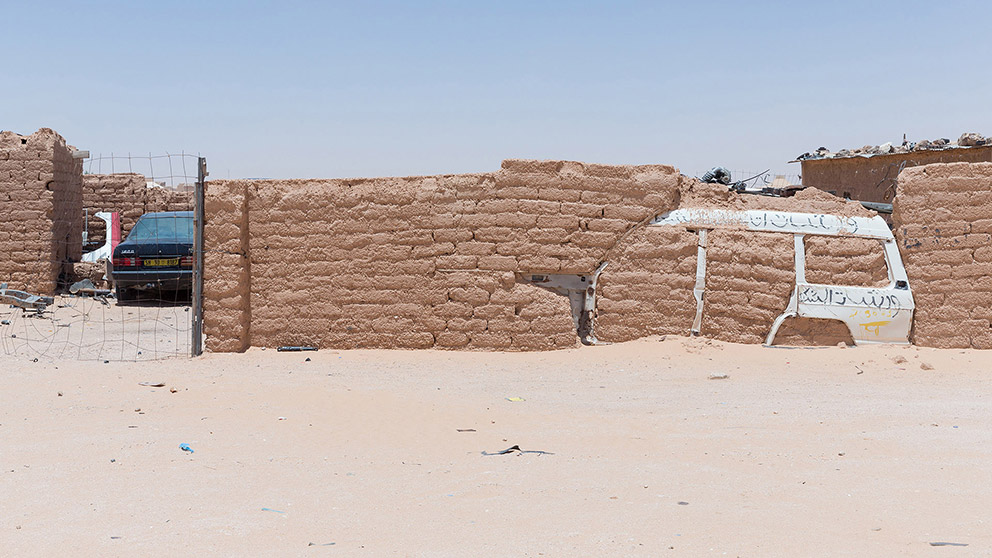 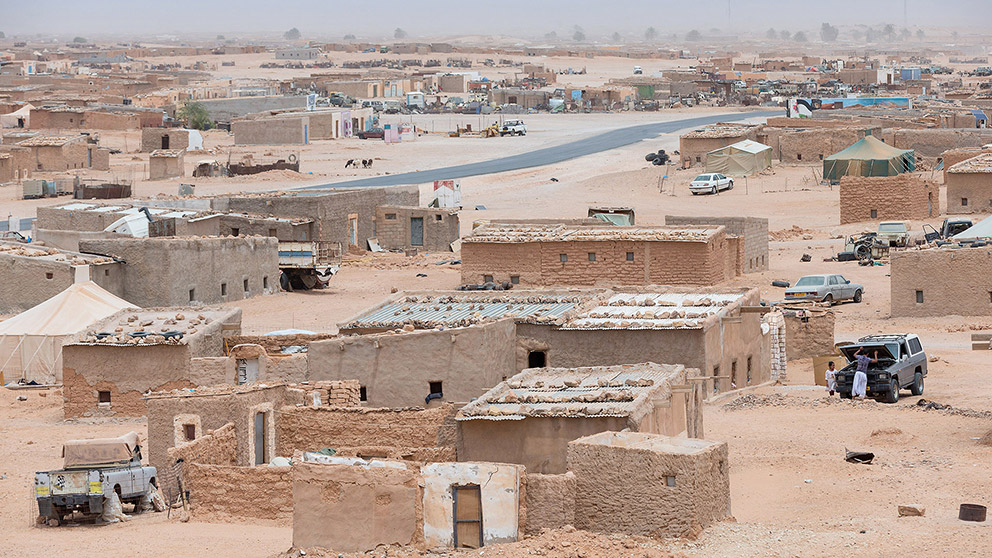