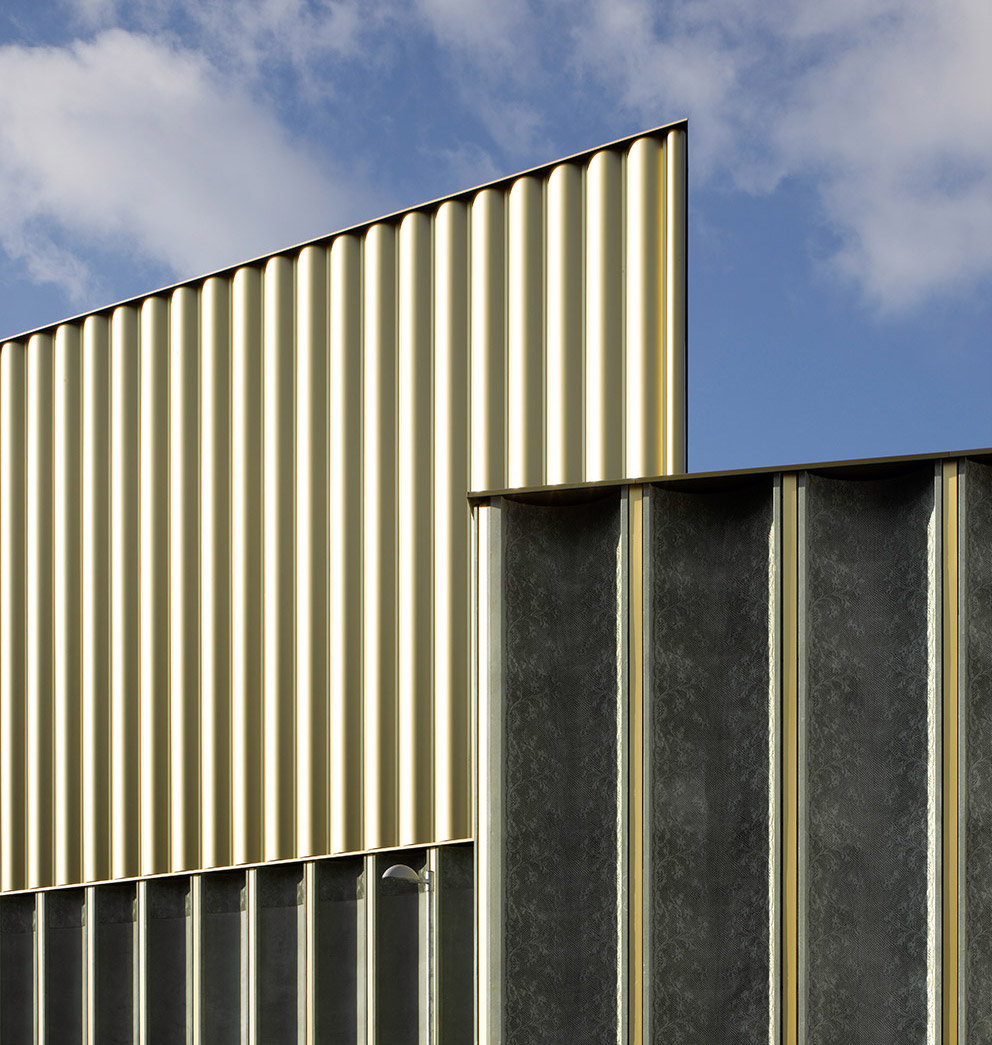 Floral ornament for the museum: the façade of Nottingham Contemporary in Nottingham by Caruso St John. Photo © Richard Bryant

In recent years, many new and high-grade architectures have been created that have placed textile structures back at the forefront of things and thus reinforced public awareness of the subject. A new zest for experimentation is in evidence, one that attempts to transfer textiles’ haptic and visual properties onto other materials. Long-forgotten textile architectural traditions are being rediscovered and advanced by means of a modern formal language and cutting-edge materials engineering. 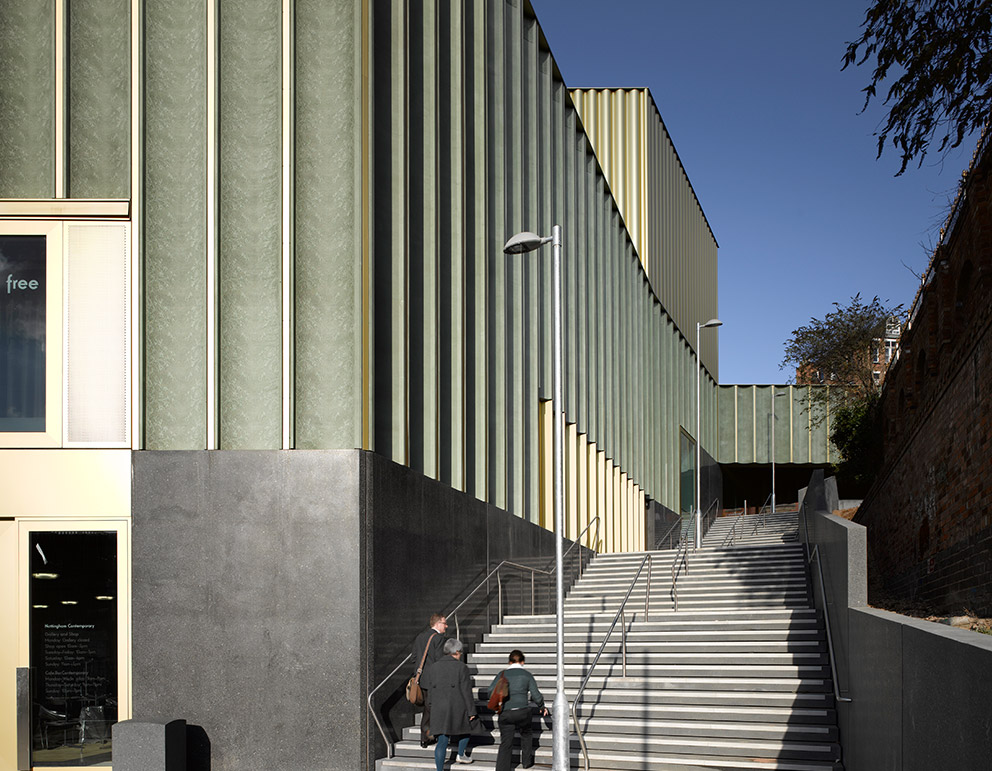 Vertical gold: The façade is made of concrete shells, which are reminding of textile lace. Photo © Richard Bryant

The Nottingham Contemporary art center (built 2004-2009) in the UK’s East Midlands is among the beacon projects of the British cultural policy of the last decade. They were launched to boost the profile of deindustrialized cities and attract tourists, enter the Bilbao Effect. The museum consists of an arrangement of different-sized cubes gracing the sloping terrain in central Nottingham. With their design, London-based architects Caruso St John make explicit reference to Gottfried Semper’s (1803-1879) textile theory. Here the origins of the wall – once a mesh of fabrics with different woven patterns to cloak the bare framework of the so-called primitive hut – take on a key formal task. The individual cuboid exhibition spaces of Nottingham Contemporary with their tall superstructures are visually linked by a large, seemingly uniform curtain consisting of successive vertical, dyed concrete shells and champagne-colored connectors. Only at selected spots do large windows breach the stone curtain wall and provide a view of the well-protected interior.

Only on close inspection does the greenish-gray shimmering concrete shell reveal its extraordinary surface structure in the form of an embossed ornamental lace pattern. With the lace embossing Caruso St John aimed to make reference to Nottingham’s 19th-century industrial and textile-making past and play with the textile image of a collective memory. With the concept of interlacing social, political and architectural aspects the museum building is placed in its historical and contemporary context. 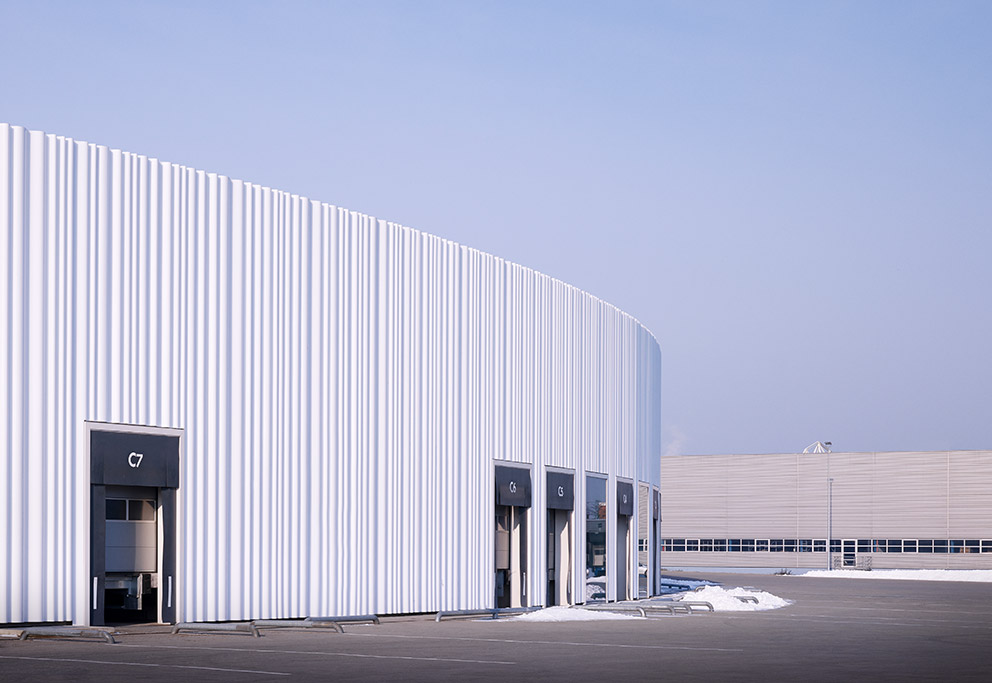 Filigree waves: The façade of Vitra’s fabric in Weil am Rhein is made of acryl glass elements with different widths, designed by SANAA Architects. Photo © Vitra

Yet it is not only cultural buildings that have been seeing the application of high-grade textile architecture for some time now. In 2013 Vitra presented a further collectors’ item for its Vitra Campus in Weil am Rhein. The new production hall (2006-2013) was designed by Japanese studio SANAA and is intended to be an architectural reflection of future production conditions. To ensure that the largest structure on the campus (180 meters in diameter) does not look overly monumental, the architects forwent a precisely circular footprint and lent it a soft, amorphous form, as though drawn by hand.

For the cladding of the hall, the architects used paper model studies to develop a curtain wall façade made of undulating, milky-white acrylic glass panels. Similarly to Nottingham Contemporary, whose exposed concrete bears the haptic qualities of velvet or lace, the architects of the Vitra production hall transferred fabric and textile associations to other materials in terms of haptic and visual quality. The sophisticated formal specifications of the acrylic glass elements required a rhythmically alternating undulating pattern in varying intensities. To this end, three modules all with different designs were chosen, 1.80 meters wide and 11.30 meters high.

The multi-layer co-extruded acrylic glass initially consisted of a clear (5 mm) and a white (1 mm) layer, heated in a specially made (given the unusual length of the elements) oven at 60 degrees and vacuum formed into waves. Owing to the particular challenges of the production process the acrylic glass curtain wall façade received only one-off approval and cannot be patented. Its hard white appearance lends the new warehouse a strong presence, which shines even in gray, stormy weather. 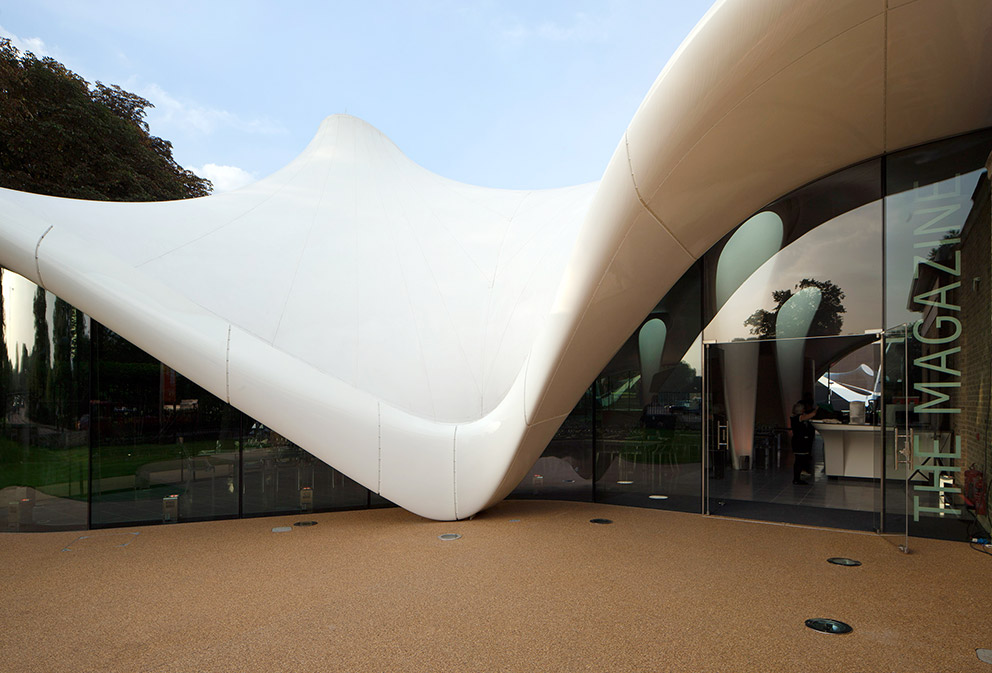 Since the year 2000 the pavilion of the Serpentine Galleries in London’s Kensington Gardens has annually presented diverse and atmospheric small-scale architectural creations destined to interact with the superb setting – a veritable treasure trove for current positions on textile-inspired architecture. Moreover, the new building for the Serpentine Sackler Gallery by Zaha Hadid, completed in 2013 and located in its immediate vicinity, has once again set the focus on celebrating textiles as a building material – a tent structure has been chosen for the new extension. In reference to the three chalice-shaped freestanding parasols she developed in 2007 with “Lilas”, her temporary display for the Serpentine Galleries, the London architect has adopted the theme for her new gallery building, only this time combining the individual chalices into a continuous canopy made of fiberglass fabrics.

The roof membrane forms an integral part of the building’s supporting structure. The circular beam, realized as a twisted traverse that rests on three points, emulates the shape of the existing old building before it veers over towards the park, a demonstration of weightlessness. Inspired by complex and natural geometries, Hadid’s pavilion, with the calligraphic quality of its arches and undulating lines, pays homage to Frei Otto’s legendary membrane structures. 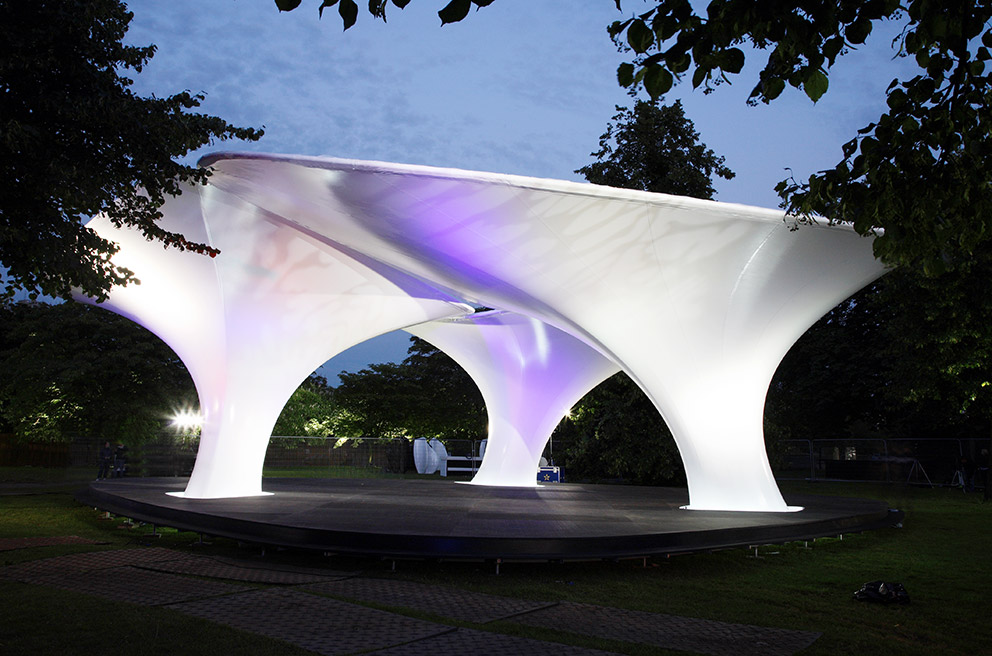 The free standing cup-shaped sheds made of glass-fibre fabrics were designed for the presentation “Lilas” at Serpentine Gallery by Zaha Hadid in 2007. Photo © Luke Hayes

In contrast to Hadid’s lightweight marquee-like construction, the Serpentine Pavilion that Chilean architect Smiljan Radic designed in 2014 seeks to create an atmosphere of security with its primeval, archaic model of a fiberglass cave structure positioned on boulders. This intriguing scenario of contrasting spatial experiences offered by these two Serpentine buildings culminates symbiotically in the complex pavilion that Rem Koolhaas, OMA/AMO, created in 2009 for Miuccia Prada in Seoul.

The 20-meter-tall temporary building has been conceived as a multifunctional transformer. Its configuration possibilities are based on four different footprints: a circle, square, cross and hexagon, which are structurally connected and, depending on how there are arranged, enable ever new vistas and exhibition possibilities, be it cinema, art or fashion shows. The outer shell made of PVC membrane tightly envelops the building like a second skin, sharply accentuating its contours, yet also offering smooth transitions. Using a cutaway model constructed in advance the textile surfaces were first stretched over the steel frame, subsequently fusing into a homogenous, seamless cocoon with other components with the aid of an adhesive spray. The translucent, 1.5-millimeter-thick PVC membrane was originally developed as part of arms industry research in the 1950s. Owing to its material composition the membrane does not allow any oxidation, mold growth or damp under its skin and is thus ideally suited to additional use as a shell for the Prada Pavilion, being able to protect the fabric exhibits. 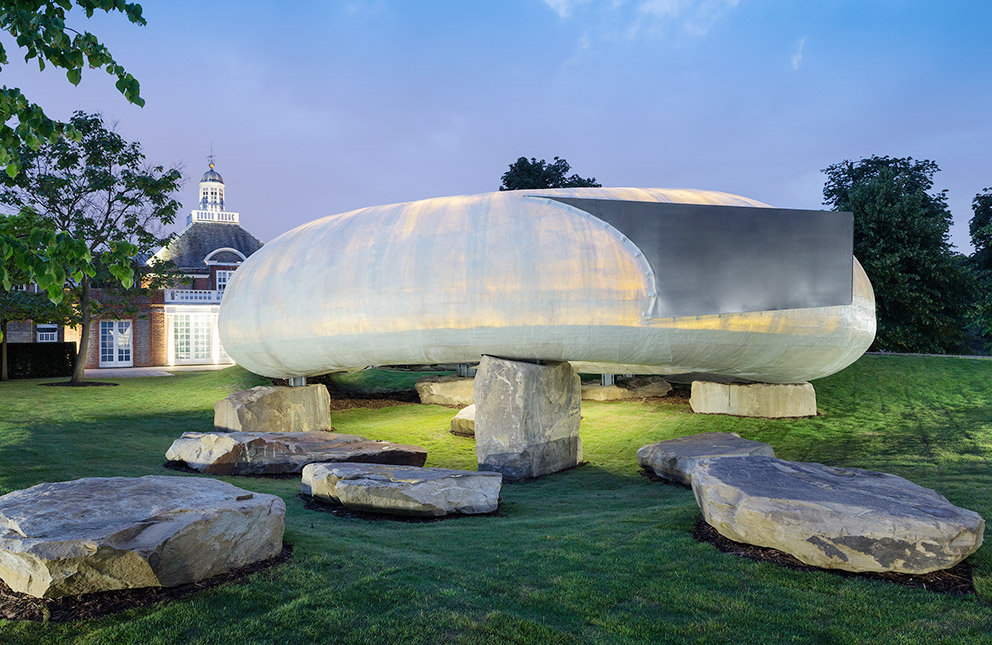 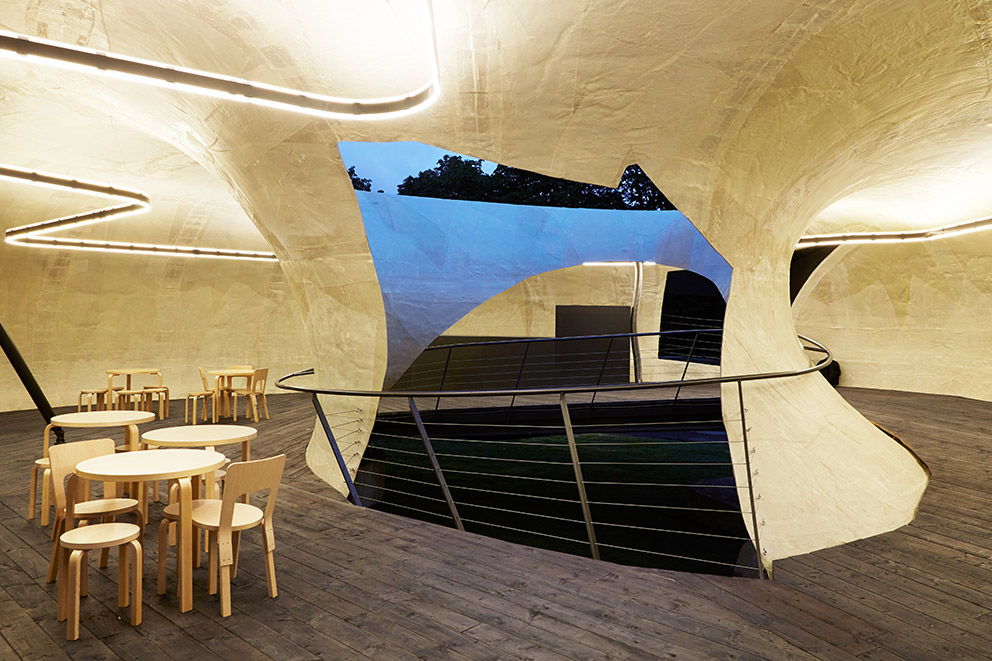 As demonstrated by this and other examples, the interdisciplinary use of materials, the symbiosis of art, architecture, design, engineering and textile research, gives rise to interesting and exciting spatial constructions with striking atmospheric and haptic qualities in the form of new textile architectures. With their clarity and radicalness, they can also be seen as a manifesto for a new materiality.

Find out more about textiles at the Fair Techtextil in Frankfurt am Main – May, 4th – 7th 2015:
www.techtextil.messefrankfurt.com

“Fresh from the textile lab”:
A tour of the experimentation into textile construction.

“A stitch in time”:
Smart textiles and luminescent fabrics at the Techtextil 2015 in Frankfurt am Main. 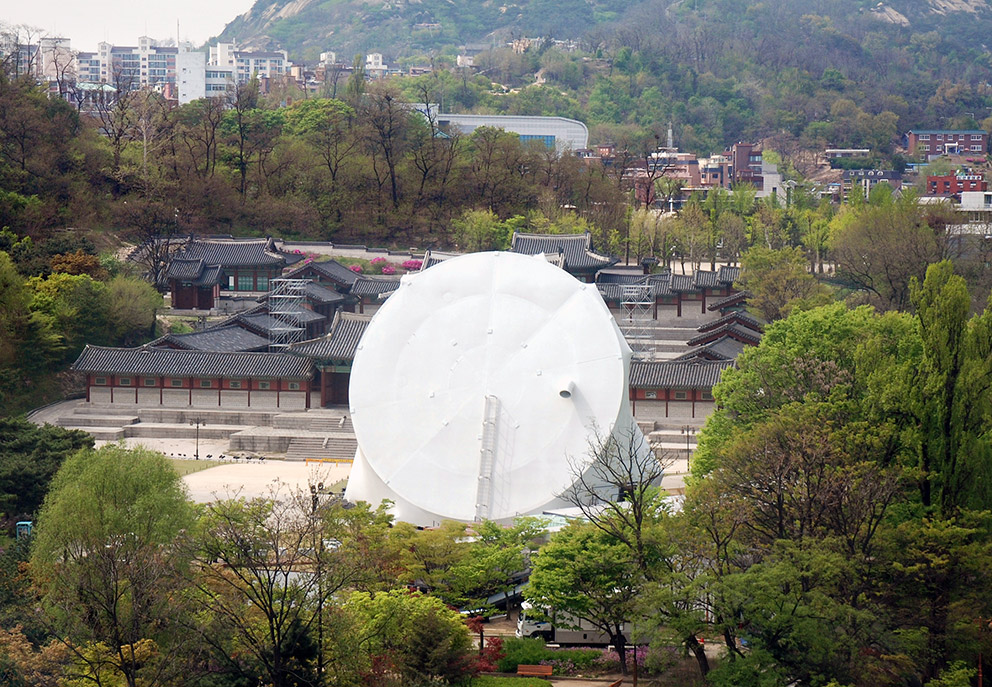 The pavilion with a skin of PVC membrane for Miuccia Prada in Seoul, designed by Rem Koolhaas in 2009. Photo © Prada Transformer / OMA 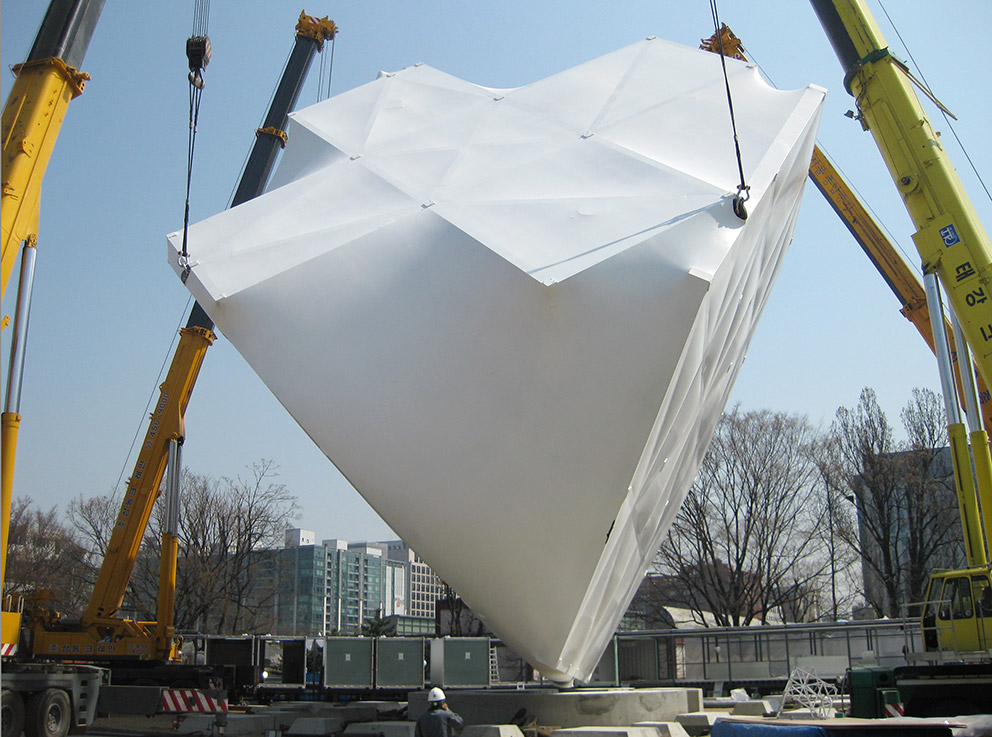 Cocoon without gabs: The PVC membrane of the pavilion of Rem Koolhaas is translucent and is strained tense over a structure of steel. Photo © Prada Transformer / OMA
Advertisement