Jean Prouvé designed the prefabricated house "Maison Tropicale" for the French colonies in West Africa in the 1950s. Once intended as housing for the masses, nowadays it is an exclusive collectors' item. Even a few years ago an auction at Christie's caused quite a stir when, according to "Architect's Journal", one of the houses was sold for around five million Euro. What is this interest in the Maison Tropicale, the numerous articles in the culture sections of international newspapers and the many exhibitions by major museums based on? Is it the tragic story of a major commission for Jean Prouvé's already financially stricken studio that was never completed? Is it the story that tells of how the Maison Tropicale was used during the political turmoil in West Africa? Or is it the increasing value, for collectors, of designs by Prouvé, among which the Maison Tropicale has a special place as a milestone in industrial prefabricated construction?

Between 1949 and 1951, the French Overseas Department commissioned Prouvé to design prefabricated houses for the French colonies in West Africa in order to solve the housing shortage problems there. Intended for use as private residences and office buildings, Prouvé produced three prototypes in his workshop in Maxéville near Nancy. The first house was erected in 1949 in Niamey, Niger, and two more in 1952 in Brazzaville, the Congo. The latter two stood right next to each other, connected by a bridge. The smaller building was initially used as the information office for the manufacturer "Aluminium Francais", whereas the larger one served as the residence of the business manager Jacques Piget. However, it quickly transpired that the overall costs of the Maison Tropicale were higher than those of buildings constructed locally in the colonies, and moreover, they proved to be too complex to erect and, with their industrial appearance, failed to satisfy the wishes of the expatriates living there. Although 10,000 of the Maison Tropicale were originally envisaged in Africa, no construction contracts followed the initial prototypes.

The three prototypes remained in Africa for almost 50 years, even after the end of the colonial era. They continued to be used, yet were eventually forgotten. Then however, art collectors became increasingly interested in the works of Jean Prouvé, and the French art dealer Eric Touchaleaume became aware of the prototypes of the Maison Tropicale in West Africa. When he went to see them, however, he discovered that decades of use had left their mark on the houses. The weather had caused corrosion, the inhabitants had made structural modifications and there were bullet holes from the Congo civil war on the houses in Brazzaville. Moreover, on account of changes in government and intermittent civil war, it was initially unclear who actually owned the houses. Ultimately, Touchaleaume was able to buy the houses and permitted to export them. In 2000 the art dealer brought his new acquisitions to Europe on somewhat of an adventure; by way of example, a railway line in the Congo even had to be repaired to transport them. Back in Europe the houses were extensively renovated and since then have been ready for new uses. The Niamey house is to become a mobile museum devoted to the life and work of Jean Prouvé. For around one million US dollars the small Brazzaville house was initially sold to the bankers Robert and Stephan Rubin, who have loaned it to the Centre Pompidou in Paris, which will first put it on display for museum visitors, after which it is scheduled, in fall 2010, to move on to the Centre Pompidou in Metz before being exhibited at the Musée des Beaux-Arts in Nancy until 2012. The hotelier André Balazs bought the large Brazzaville house for approximately five million Euro in June 2007 at an auction at Christie's in New York. Following an exhibition on Jean Prouvé at the Design Museum London from December 2007 until April 2008, where the Maison Tropicale was reconstructed for the Design Museum and was erected outside the Tate Modern, London. The house is now somewhere in the Tropics - and according to some rumors, it is being used as a hotel bar in the Bahamas.

Yet if it is capable of being continually transported, just how is the Maison Tropicale constructed? Given the uneven ground, the Niamey house originally stood on a concrete slab, whereas the Brazzaville houses were built on stilts. A frame construction of vertical and horizontal struts held the floor, wall and ceiling panels in place. The panels are a maximum of four meters wide. All the elements are made of steel or aluminum. The amount of floor space varies, for example, the large Brazzaville house has a floor space of 10 x 18 meters, and the hall-like space can be divided up if necessary. A gallery runs around the entire house. The Maison Tropicale can be packed in normal freight containers and as such, for example, transported by truck, train, ship or airplane. The small Brazzaville house fits in six containers, for instance, and four men need about seven to ten days to assemble and disassemble it.

The Maison Tropicale is occasionally considered the finest expression of Jean Prouvé's penchant for mobile structures, evident in a great many prefabricated houses, construction elements and façades. The prefabricated house "Maison Meudon", for example, (1949-52) is considered a "mainland" version of the Maison Tropicale - conceived to help alleviate the shortage of living space in post-War France. When designing the Maison Tropicale, however, Prouvé paid particular attention to ensuring that the individual components, before assembly, could be packed in such a way that they could be loaded onto aircraft for transport overseas. In addition to the Maison Tropicale, Prouvé also designed the prefabricated house "Maison du Sahara" (1958) for use in Africa. Given the desert climate, he attached particular importance to the ventilation and cooling system in the house. Even the Maison Tropicale, with its shutter-like flaps in the walls and openings in the ceiling, for instance, was geared to the African climate. However, when he came to design his Maison du Sahara, Prouvé went several steps further in terms of ‘air conditioning'. The house is structured similarly to a Bedouin tent, with heat-resistant materials and integrated cooling devices. At the end of the day, all these designs make use of a comparable frame construction that can be disassembled. That said, the individual configurations of the houses vary, making them unique. 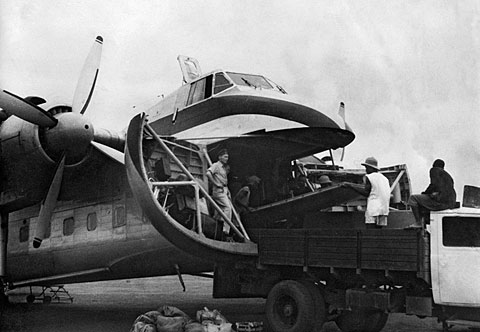 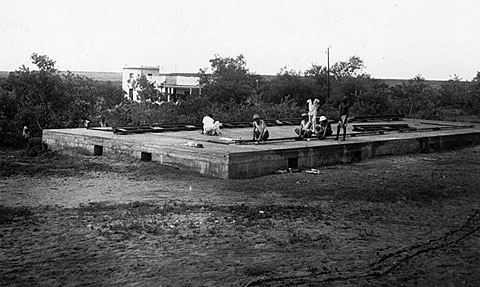 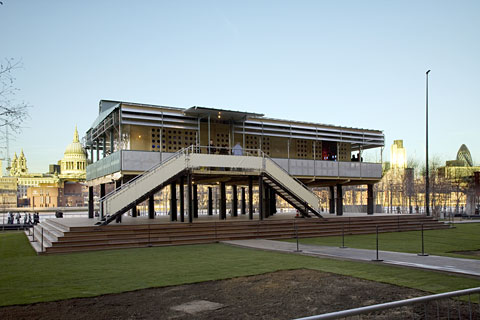 Build up of the Maison Tropicale during the Jean Prouvé exhibition of Design Museum Londons from December 2007 until April 2008 next to Tate Modern, Photo: Luke Hayes 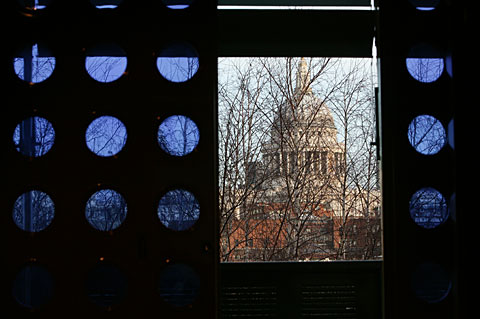 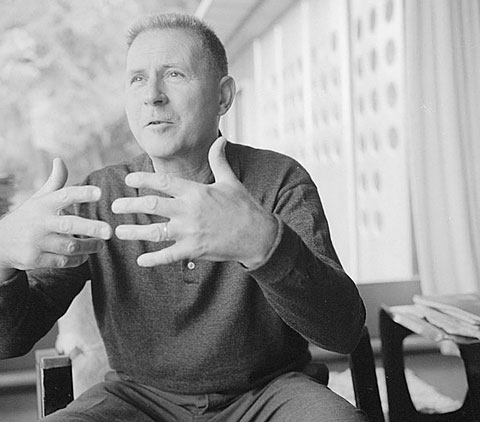 3D-Animation about the Construction of the Maison Tropicale 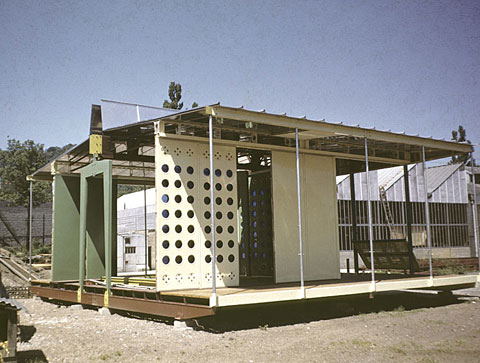 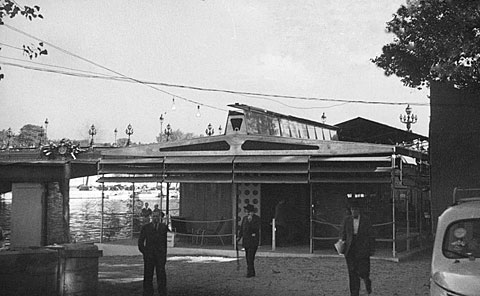 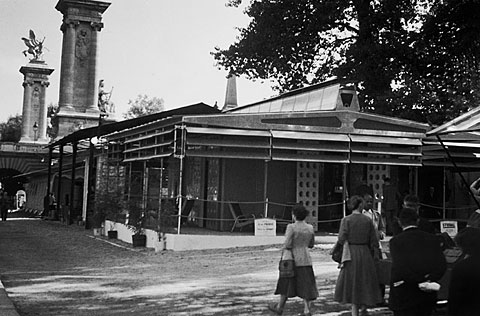 Maison Tropicale in London, during the Jean Prouvé exhibition in Design Museum London 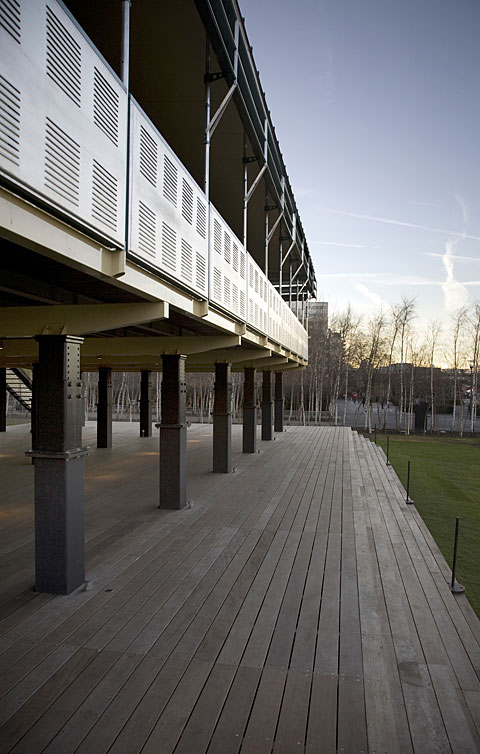 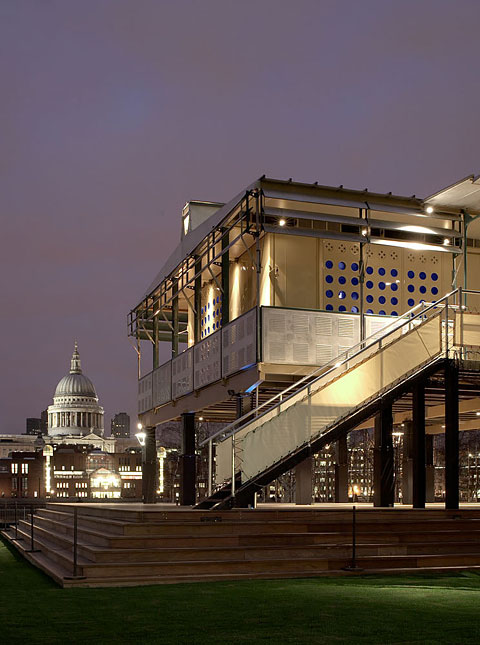 Video about the Maison Tropicale
Advertisement