top
A trip through the trade fair jungle with Stylepark
by Daniel von Bernstorff | Jan 6, 2011 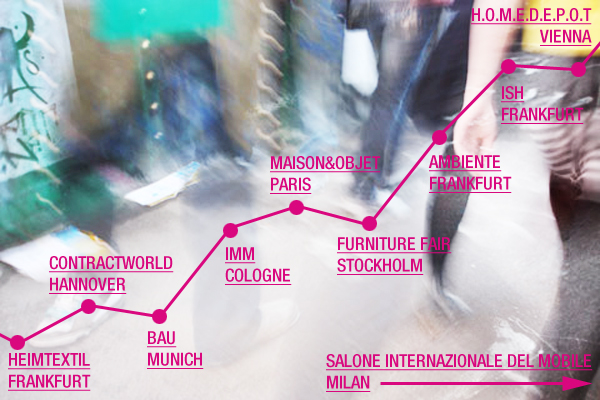 The middle of January will see the start of a whole host of international trade fairs in a number of sectors. Here, our editorial team briefly presents the individual fairs along with the key facts and relevance for designers and architects and, in so doing, hopes to get you in the mood for the "hot" trade fair season from January to mid-March.

Heimtextil in Frankfurt will kick off the season from January 12 to 15. It is billed as the leading trade fair for home and object textiles. Although the decision by several leading textile companies to exhibit at imm cologne this year instead of Frankfurt has left a gaping hole, the organizers are optimistic that they can use the positive economic climate to their advantage. The core of the new hall concept will no doubt be Hall 3, where leading manufacturers from the wall, floor and ceiling sectors will exhibit their latest products. We are particularly interested to see what Marburg Wallcoverings, one of the highlights of last year, has in store.

On the last day of Heimtextil, January 15, Contractworld starts in Hanover, a fair which in recent years has evolved into a top discussion forum for international architects. So for those wishing to see Jürgen Mayer H., Wiel Arets, Michael Schumacher, Brian Cody, David Adjaye and others in person, this is the place to be. In our opinion, the associated exhibition of a small number of architecture and design studios does not appear sufficient cause for a visit.

And on we go: Bau, the world's leading trade fair for architecture, materials and systems, will run from January 17 until 22 at the Munich exhibition complex. Bau has grown continually in recent years and in this period of economic upswing is stronger than ever before. Companies in the interior design sector are also increasingly exhibiting their products, such as Bolon from Munich. At the same time, this will surely increase the relevance of, but also the element of confusion at this already immense trade fair. That said, any professionals involved in architecture and planning should definitely devote a day to this fair. And don't forget, Bau takes place only every other year.

Almost simultaneously, and thus extremely problematic for professional visitors as well as exhibitors, the imm cologne furniture fair will take place from January 18 until 23. Much berated in recent years, imm is ready to strike back this year with its presentation, using the Pure Textile concept, of a group of leading textile companies for the first time, including Nya Nordiska, Jab Anstoetz, Kinnasand, Sahco Hesslein and Création Baumann, as well as leading kitchen manufacturers under the heading Living Kitchens. The Pure Village of last year will also return. Unfortunately this means that young designers and universities, one of the highlights at imm, will not enjoy such prominent representation as last year. It remains to be seen whether these measures will spell the end of the crisis for imm. Once again this year, big names such as Thonet, Vitra, Nils Holger Moormann, Magis, Plank and all Spanish manufacturers will be absent. Further, this year's supporting program "Passages" appears to offer little in the way of inspiring events. DesignPost is once again worth seeing, with new manufacturers including Montana and Andreu World. We wait with baited breath!

And that is still not all in January, for from January 21 until 25 Maison&Objet will take place in Paris. It has developed in recent years into a serious competitor of Cologne and Milan, but has most recently slackened again. The reasons: its unclear profile - showing everything from furniture to accessories, the unfavorable location of the trade fair complex, which is considerably too small and confusing anyway, plus overpriced hotel and stand rates. Once again this year, textile companies will exhibit at Déco-Off in the city, and not at the exhibition complex. In short, it seems Maison&Objet has passed its zenith. Still, for those who want to spend a weekend in Paris - the launch on Friday being the perfect opportunity - should do so with a good conscience.

Traditionally, February kicks off with one of the best international design fairs. The Stockholm Furniture Fair - from February 8 to 12 - has for years been the uncontested design center of Scandinavia and is in our opinion the best and most concentrated design event, along with Designers' Saturday in Langenthal, in the world. In recent years, the Stockholm Furniture Fair organizers have consistently strengthened the international profile; the fair has been an absolute must for many leading manufacturers for years. Moreover, the city of Stockholm offers a great many exhibitions, showrooms and events. This year's guest of honor is the designer Arik Levy, whose special exhibition we can hardly wait to see. Not to be missed!

The leading consumer goods fair Ambiente in Frankfurt, this year from February 11 to 15, put on a strong show last year, as Stylepark reported in "Ambiente revisited". This development should continue in the present favorable economic climate and in addition Ambiente is benefiting indirectly from its flagging fall counterpart Tendence. For it is now clear to most manufacturers that when you opt for just one trade fair, it has to be Ambiente!

Let us end our tour of the upcoming trade fairs with the ISH in Frankfurt, taking place from March 15 to 19. The biennial fair is the "world's biggest showcase for innovative bathroom design, energy efficient heating and air-conditioning technology and renewable energies", as the organizers put it, rather long-windedly. But don't let that put you off, for ISH is indeed an impressive industry show where one day is almost not enough. So, in this case we are happy to walk for 45 minutes between Frankfurt's Hall 3 and Hall 11.

And to round it all off a little bonus: From March 16 to 20 the wonderful Semperdepot in Vienna will host the trade fair H.O.M.E.D.E.P.O.T, which has been successfully realized by the magazine of the same name for several years now. Worthwhile for every design enthusiast and expert and moreover a great opportunity to visit Vienna too.

We hope this overview has shed some light on the many upcoming trade fairs and will be back in March at the latest with details of what to expect at the design highlight of every year, the Salone del Mobile in Milan.