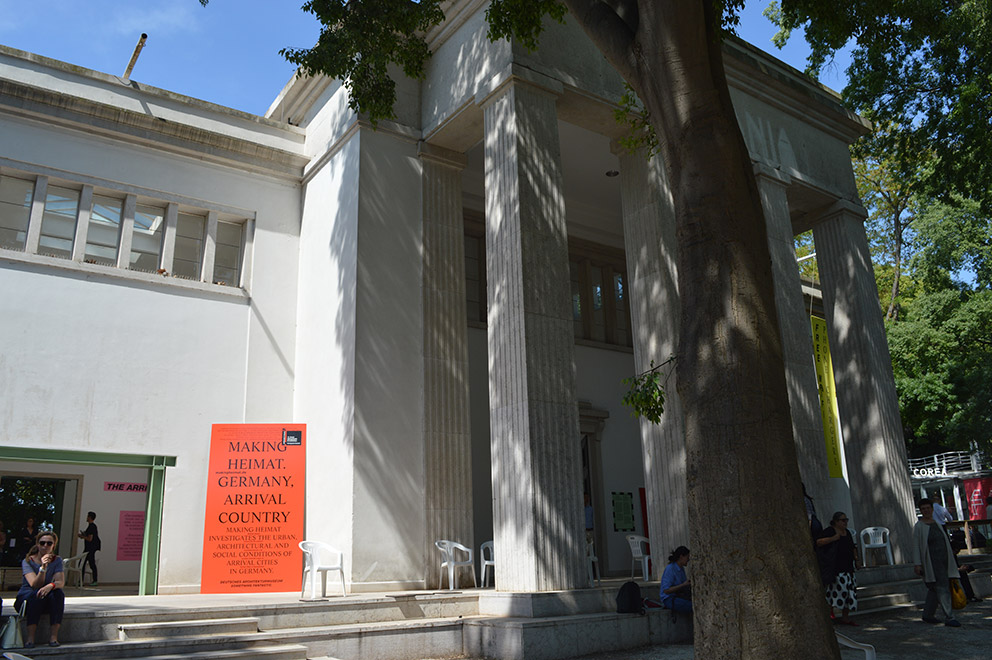 Suddenly the mind floats more freely through the much-derided walls: Large sections of masonry have been removed to render the German Pavilion much more open on many sides. Photo © Thomas Wagner, Stylepark

At the opening a balmy wind breezes through the high halls. You can hear birds twittering. The throb of maritime diesel engines wafts over from the lagoon, sounding as if a vaporetto were just mooring up at the pavilion. In the apsis the sun twinkles between the treetops, voices from inside and outside meld. Everything was open. Everything is open. Everything remains open.
They have had four large openings made in the walls of the German Pavilion, opening it out onto the Venetian gardens. More than 48 tons of bricks were removed from the heritage-listed walls to transform a building infused with false national pathos into a truly open house. The curators’ and exhibition architects’ discussions have resulted in a built metaphor, as simple as it is effective.

Where there are many openings instead of a door the mind can float more freely through the walls, irrespective of when they were built. The pavilion architrave still boasts the word “Germania” in capitals – whereas it could just as easily read “Arrival Country”. The gesture will be retained. It can no longer be reversed. The history of this controversial building can no longer be imagined without it. The results simply have to be endured, should undesired guests drop in or rain leave traces. After all, cosmopolitan openness is initially no more than a nice, friendly sounding term. And whenever doors are open and something from the world outside blows in, here, too, the customary order gets out of kilter. As in history, in this case, too, all you need is a single alteration, a small shift, and everything changes – a real building and various things in the mind.

The pavilion – open on all sides. Like Germany last year, when it opened its borders for more than a million refugees, despite largely closed EU borders to the outside world. Should we call this symbolic gesture idealist, or indeed romantic, taking as it does this controversial edifice as the basis for thinking about Germany as an open immigration destination? 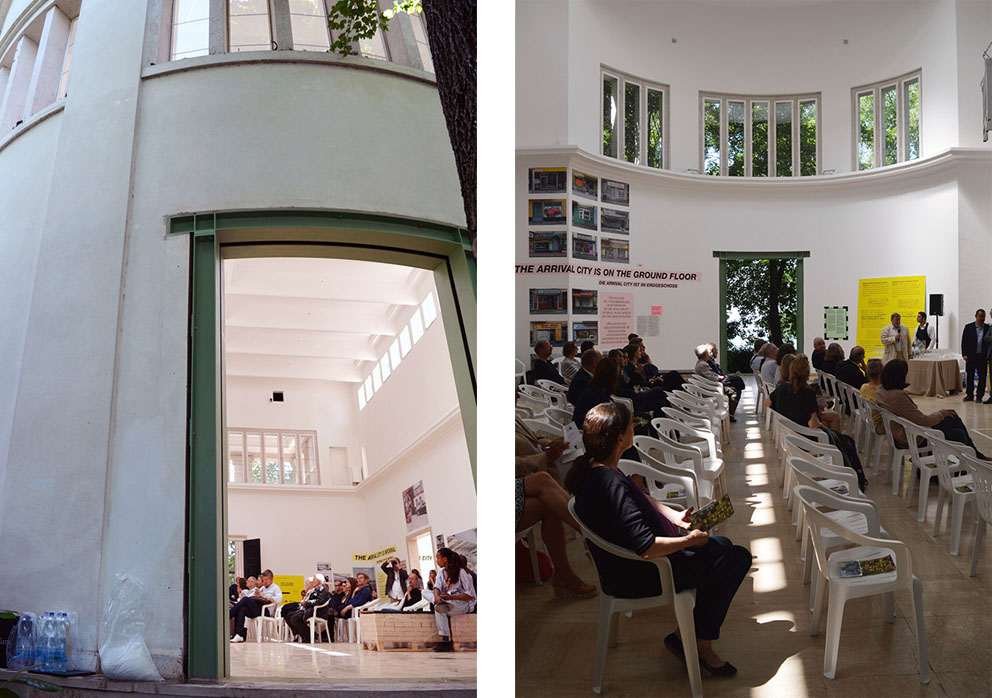 The lagoon behind you and with a view of the park: Never before have you been able to gaze into the pavilion’s main hall from this angle. The openings in the walls, framed by iron beams, become gateways for agitating and unsettling thoughts. Photo © Thomas Wagner, Stylepark

Whatever stands open is also up for grabs

In democratically structured communities wellbeing (and its opposite) evidently has two bodies, the way the king once did. While it usually vacillates in its own skin depending on the situation, but is comparatively easily explored, a collective sense of feeling at home faces countless obstacles, be they of a political, institutional or ideological nature. Not to forget that in a society so easily agitated by the media private micro-political emotions can impact directly on collective wellbeing and can be instrumentalized for quite different purposes.
It is now but a few months since Germany (or its collective common body corporate) was shaken by sharp pains. Arrival was one. The responses to it another. Xenophobia on the one hand, a culture of welcoming on the other, bringing the body’s fluids to the boil, agitating the political body. Day after day countless thousands of refugees arrived, were welcomed and rejected, encountered cordial attention and fierce hostility. Pegida and AfD, a grouchy Bavarian Minister President and an unerring Federal Chancellor, permanent media arousal, often staged emotionally or intensified to the point of hysteria, the search for solutions and ideological trench warfare, all of that was part and parcel, continues to be and will tomorrow be part of Germany.

This all bears remembering if one wants to understand how and at what different levels the German contribution to this year’s Architecture Biennale functions. Here, openings are not only knocked in the walls, here not only is a proposal vaunted, here most of the stops are pulled out, the melody and accompaniment are played on several keyboards at once. After all, this is not a playful matter. Nothing remains some staged add-on, but is intimately connected with the main issue here: immigration and its consequences.
Which is why the open walls are also not simply windows framed by iron beams, but gateways for rebellious and most certainly disturbing thoughts – about people and cities, about heading off and arriving, about being allowed to stay and wanting to stay, about becoming open or sealing oneself off – and about the possible reason whether or how all of this succeeds or fails. 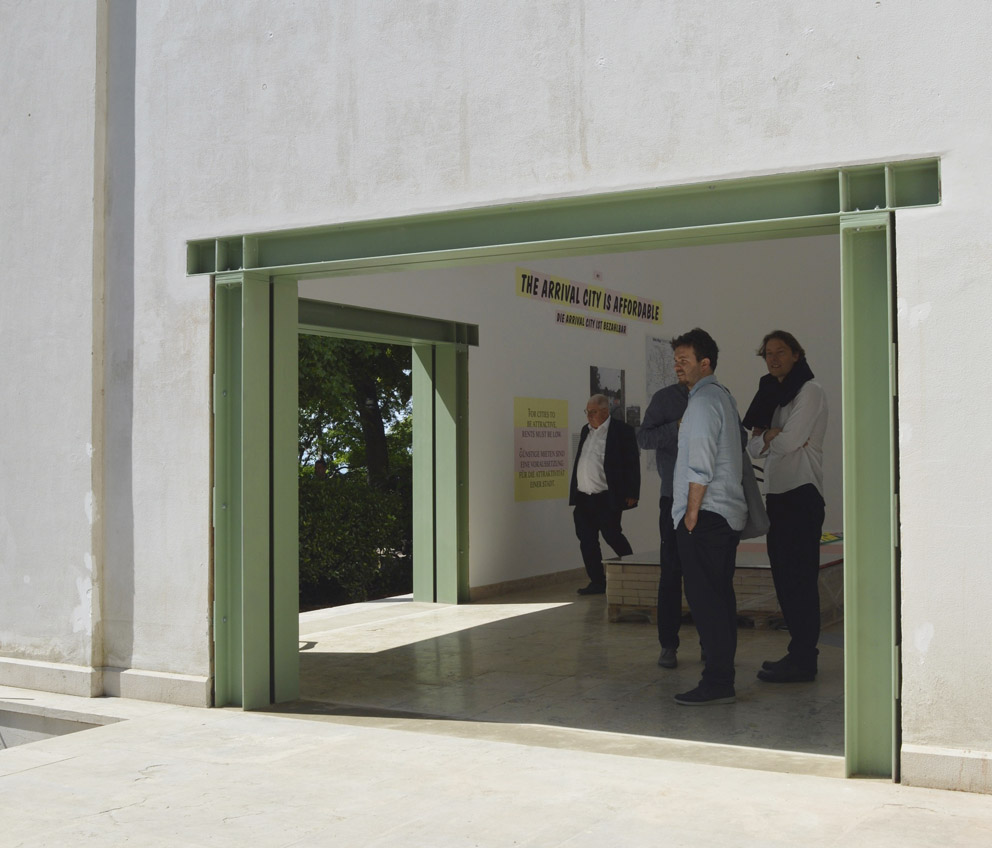 None of your usual panorama windows: “Arrival City” is as little set off from all else as is the pavilion itself. Photo © Thomas Wagner, Stylepark

“Making Heimat”, even the first part of the exhibition title suggests that something can be done here, that something has been done, something has been made. But is that possible, making Heimat? Can something like that even be made? And if so, how? Is that really a task for the makers? Let alone one for urban planners and architects?
Apropos prestigious: The Federal Minister for the Environment, Nature Conservation and Nuclear Safety, Barbara Hendricks, in whose portfolio the pavilion currently falls, also speaks in her preface to the catalog of “offerings for a form of integration that can succeed”, of “framework conditions” that need to be created “if Germany is to become a new Heimat for many people.” And she adds: “The federal government, the states and the local authorities are jointly tackling this task, together with civil society and many volunteers.” That sounds just the way politicians speak, or rather how their speech- or preface-writers would have them speak. Biennales are strongly a matter of symbolic politics, and the procedure of making Heimat thus sounds duly abstract.

The makers of the German contribution are not identical with all those who are expected to, want to and can make their Heimat somewhere in Germany. Peter Cachola Schmal, Oliver Elser, Anna Scheuermann of Deutsches Architekturmuseum in Frankfurt/Main, and the team at Berlin’s Something Fantastic, which together with them handled the exhibition architecture and the catalog, have on the contrary successfully attempted to meet such abstractions head-on. And they succeed here in different ways precisely because they end up with more questions than they do answers.

There is no need to agree with them on all points. What they offer is essentially a DIY kit of questions that opens up perspectives for thinking outside the standard box. After all, arrival, and this shouldn’t be forgotten, may sound a bit like it’s about airports, but actually entails many other connotations that go far beyond building. In part, these lead deep down into the foundations of a culture and a religion. Thus, and this is perhaps no coincidence, Psalm 24 of course suggests: “Lift up your heads, you gates; be lifted up, you ancient doors…” 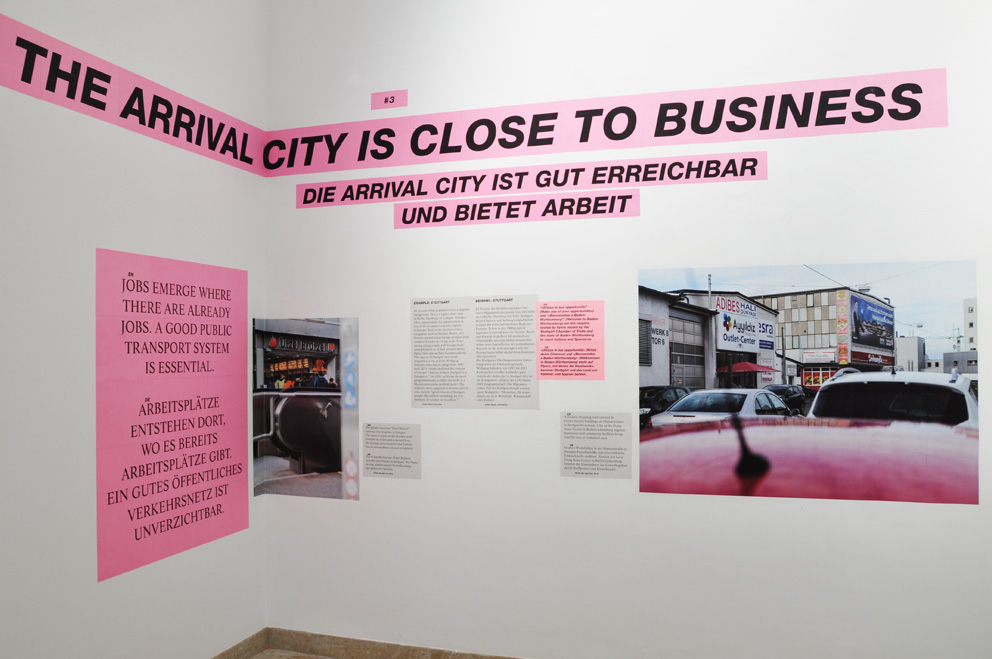 In general, work and ease of access are key: Not all the eight hypotheses on “Arrival City” are compelling, but provide plenty of food for further thought.
Photo © Robert Volhard, Stylepark

Because thinking about the conditions that give rise to a culture and a city of arrival cannot be everything, but can achieve a lot, the gesture of the pavilion open on many sides opposes any narrowing of arrival to architectural and urban planning concepts. Although of course only to be dissolved the very next moment, and rethought once again: By means of a glance at Offenbach, Germany’s most international city, and at some of its inhabitants. And by means of an online database put in place by Deutsches Architekturmuseum (DAM) that brings together the buildings for refugees or migrants realized or initiated since October 2015. Taken together, the projects, subdivided by size, cost, number of inhabitants per square meter, materials and type of structure, present a slice of built German reality. Anyone perusing them will (aside from the lightweight halls and the one or other container building) swiftly recognize all the general problems of building (mass) housing today.

Not that we now know how to make Heimat. The curators don’t know either. And they certainly don’t want to tell people what to do. What they offer are suggestions and hypotheses; they take a close look and in this way show clearly that a gesture of openness does not in itself suffice to overcome prejudice and create real conditions for everyday life from abstract notions. But you do need such gestures. Which is why the pavilion as a structure open on many sides and as a metaphor very simply disproves also the objections and allays all doubts: It straightforwardly marks a breakthrough and is open to the consequences. Even if this occurs in the protected space of the Giardini with its security guards. Perhaps Heimat can indeed be made to a certain extent. 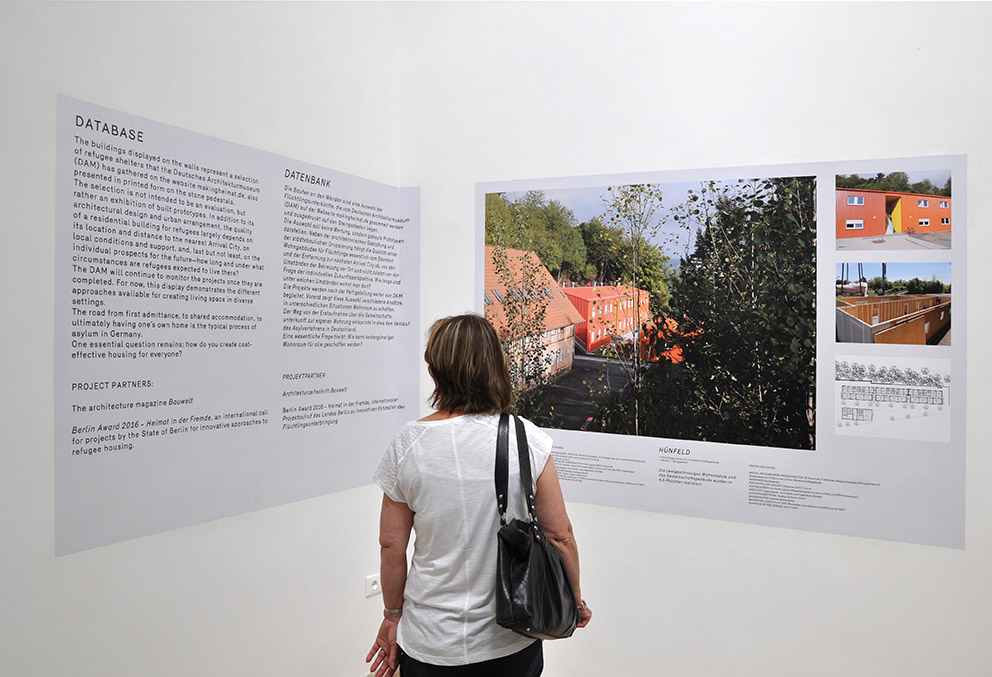 Down to earth: An online DAM database includes all the buildings for refugees and migrants realized in Germany since October 2015 or still in the process of realization.
Photo © Robert Volhard, Stylepark 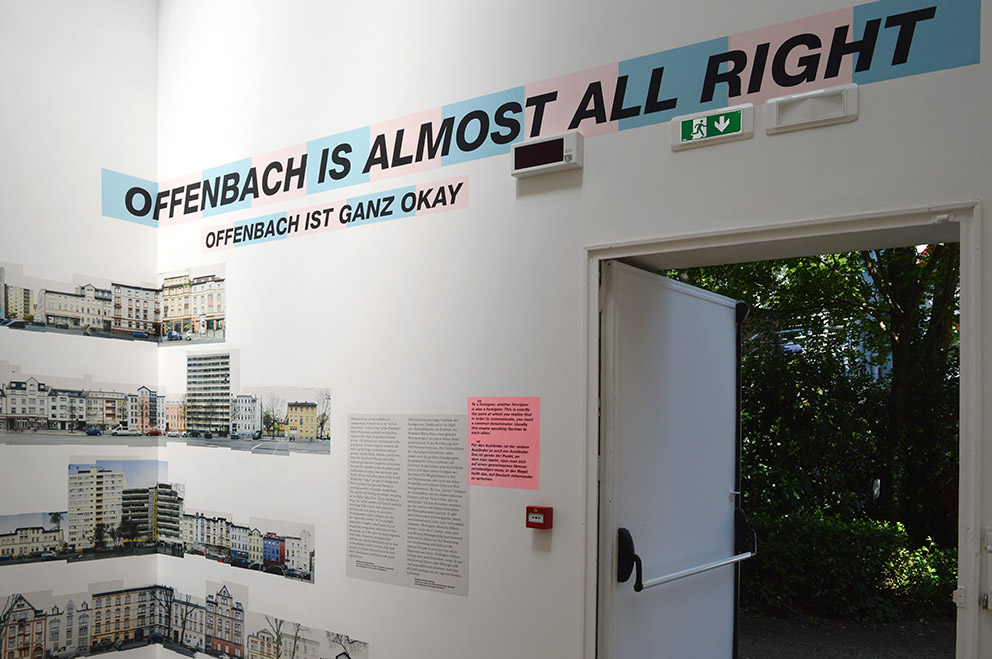 Really all OK? Offenbach am Main as the most international city in Germany serves as the example of an “Arrival City” with all the attendant issues. Photo © Thomas Wagner, Stylepark
Advertisement