top
Air does as it likes
Interview with Sabina Lang and Daniel Baumann
Oct 25, 2013 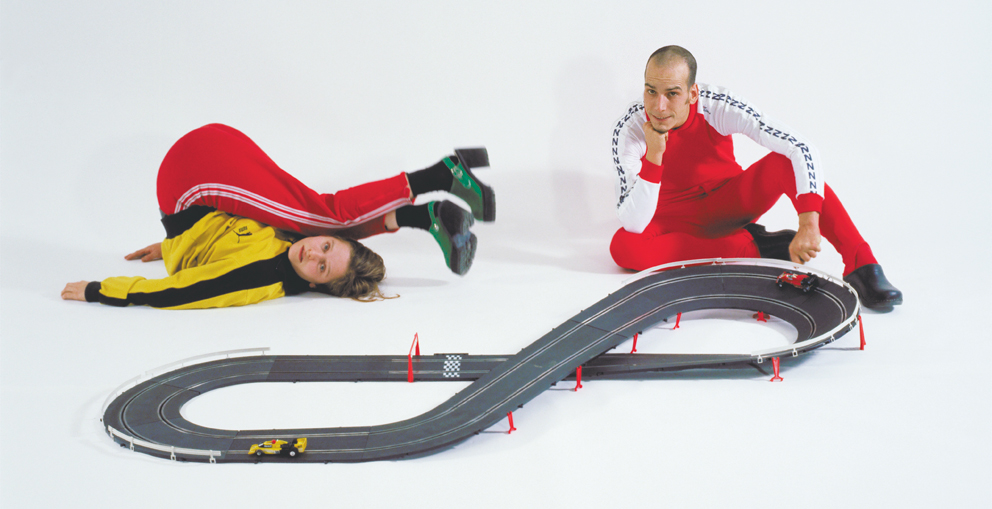 Sabina Lang and Daniel Baumann are an artist duo of the special kind. The two architects live in the picturesque town of Burgdorf in Switzerland, yet their expansive installations are to be seen the world over, in places like Paris, Warsaw, Madrid, Beijing or Buenos Aires. Their output is decidedly diverse, ranging from huge air-filled tubes winding their way through buildings facades and surrealist staircases to colorful, meandering lines that function as street paintings – or even irritating soccer-pitch markings. Lang Baumann, known under the abbreviation of “L/B”, consider public space their playground and are forever testing its limits. Özlem Özdemir spoke with the two about Baroque expressivity, the relationship of art and sport, and their plans for outer space.

Özlem Özdemir: Compared to other artist duos you two blend to such an extent that all that remains is the abbreviation “L/B”. Why?

Daniel Baumann: It’s exciting to hide behind such a label. In art, one of the preferred notions is that the artist is a genius. Things are different with a label. A label cannot be ingenious. We have fun hiding and thus helping art itself take center stage.

When reading about your work, the attributes tend to be sporty, playful, Pop-like, hard-edged, elegant, decorative, Wow effect, humorous, undisguised beauty, dream and reality, perceptual confusion, etc. Why do you think that is?

Lang: I think such labels tend to get used to pigeonhole us. We make the works as accessible as possible, for example by using colors or architectural elements. Only then do we hide things ‘behind’ them that do not get as mentioned in such attempts at categorization.

Baumann: One point that interests us is a mass that is hardly tangible and extremely massive. If something is very beautiful and yet monstrously large, the two seem to contradict each other. We like developing such tension between things that don’t really fit together. And we chisel away at them until they somehow strike a balance and the viewer can take various completely different angles on them.

What do you think of the attribute “Baroque”? Does the typical baroque joie de vivre not fit your works just as well as the idea of a certain opulence?

Baumann: We have absolutely no objections to opulence! There are countless artists who spend ages wondering how to say the same thing using less means. We do things the other way round: Can we go for even more? Can we introduce yet another aspect? We want to offer lots of different angles on our art, all of which re right, but may be mutually contradictory. Opulence is therefore not something we in any way feel is negative.

Let’s turn to an older piece: the photo “Sport #1”. We see Sabina Lang in an intimated backward flip and Daniel Baumann in the posture of Rodin’s thinker. Childlike-emphatic wish to emulate on the one side, analysis on the other, in the middle a toy racetrack. Is that a statement on your artistic method?

Baumann: We can definitely subscribe to that. The endless loop describes infinity – which contains everything. It is like an eight that, after a certain degree of progress arrives back at the start. The question is also what can be invented or innovated in a setting where you are always on the same track and the terrain has been staked out.

You wear tracksuits for it. What does that mean?

Lang: We’ve always been fascinated by sports and its aesthetic. We’ve done pieces using soccer pitches, because there are parallels to art in the sense of “game and rules”. As artists you set your own rules. This photo was made in 1996 and it was bang in the middle of the 1990s techno age. Back then those track suits were all the rage. They were given a new lease of life outside the world of sport, and that shift is what interested us most. As regards such clothing you really ask yourself whether this is really sports or actually something quite different? In the final analysis, it has little to do with sport.

Lang: Supergraphics seeks to achieve total integration. In the 1970s there were DIY books that told you how to build your own sofa or design the entire room. And the idea was always that an element extends from the wall to the sofa and then the carpet. Now that definitely interests us, the idea of incorporating everything.

French color designer Jean-Philippe Lenclos once said: “I was fascinated by the graphic elements I found in the urban landscape, such as signs and road markings on the street.”That reminds me of your piece in Zurich’s Ulmbergtunnel, where you went for the central line.

Baumann: It all started with the city council trying to combat the graffiti in the tunnel. It thought to invite artists to design something for the walls which will make things more lively and this will in turn put paid to the graffiti problem. But we said it would be far smarter to go for the blacktop as we didn’t want to slug it out with the graffiti artists. Jobs like this are great, and then you read that this or that measure had been tried out and it had all come to nothing and now, as the last resort, the idea is to “let’s go for art”. We’re not service providers and certainly not beacons of hope or bearers of good fortune.

How did you end up designing facades, interiors, staircases and lobbies and introducing tube constructions that often penetrate, embrace or decorate entire buildings?

Baumann: We started with the tubes back at the Villa du Parc in Annemasse in France. We were invited to exhibit in the villa’s 13 rooms and were horrified by the prospect of showing 13 different works. So we thought how we could interlock all these rooms and develop a dialog with the outside world, too.

So what is the practical side to working with these tubular constructions?

Baumann: We also work with prototypes. For the project in Madrid we made a 20-meter-long sausage and then tested and measured it all on the façade of our studio. You really have to test things on a life-size basis. And when using air it’s a real disaster if something doesn’t work. After all air simply does as it wishes.

From the tubes to the street: How did the “Street Painting” projects arise?

Lang: “Street Painting #1” was in Jura in Switzerland, in Môtiers and the environs. Every few years there’s a major show there, with art being displayed in the woods, the village and the meadows. We were allocated a small road at the end of the exhibition trail. The road becomes a black-top route across the fields and we painted a very plain stripe motif on it. You invariably meet this piece of painting whenever you drive over it by car.

Isn’t that a little unsettling?

Baumann: “Street Painting #2”, for example, is located in a residential estate called Hegianwandweg in Zurich and consists only of lines. And the tradesmen who were still working there even parked carefully parallel to the lines in the courtyard! They evidently read them as something functional.

Your “Hotel Everland” project functions a little like a spaceship. Does L/B have ambitious plans for outer space, too?

Baumann: First came Louisville in Kentucky and now it’s Los Angeles. We initially thought it would all go swiftly, but it’s taking a whole lot of time. Precisely a project like this confronts you with security issues, because it’s a hotel in full operation. Space travel and outer space, now that’s a real benchmark for us, creating a capsule that encloses everything and offers you everything. That was the vision of the 1960s and 1970s, life in space, back in the days when space travel started. It’ll probably remain a dream for us, though.

“Street Painting #3” at the Ulmbergtunnel in Zurich: „Let’s try it with art!“ Photo © L/B 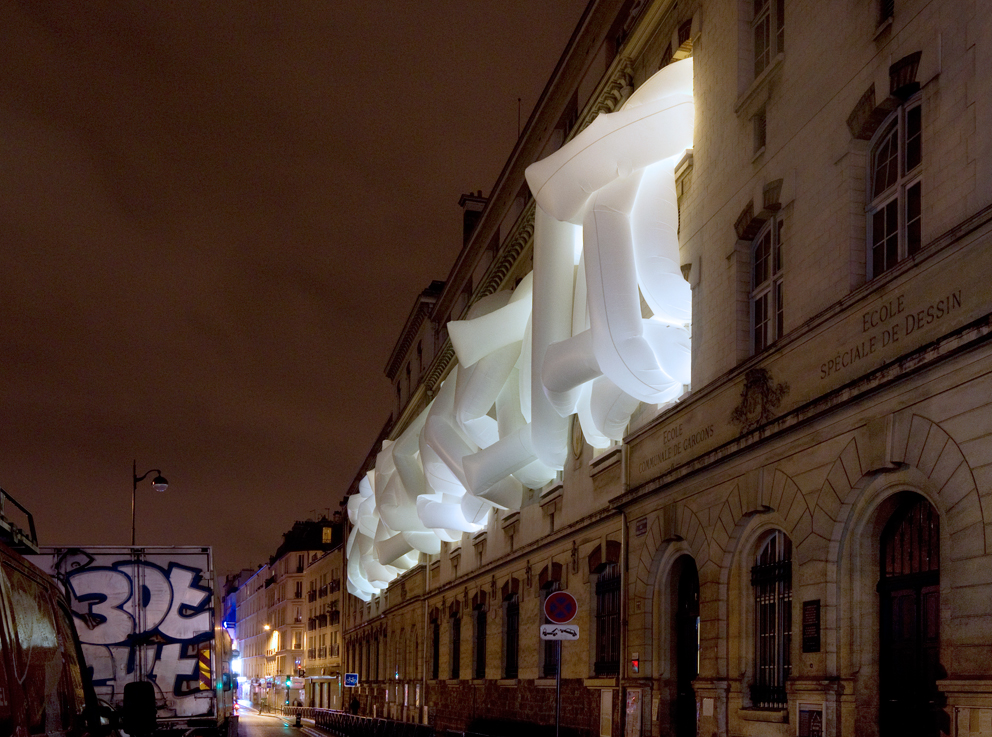 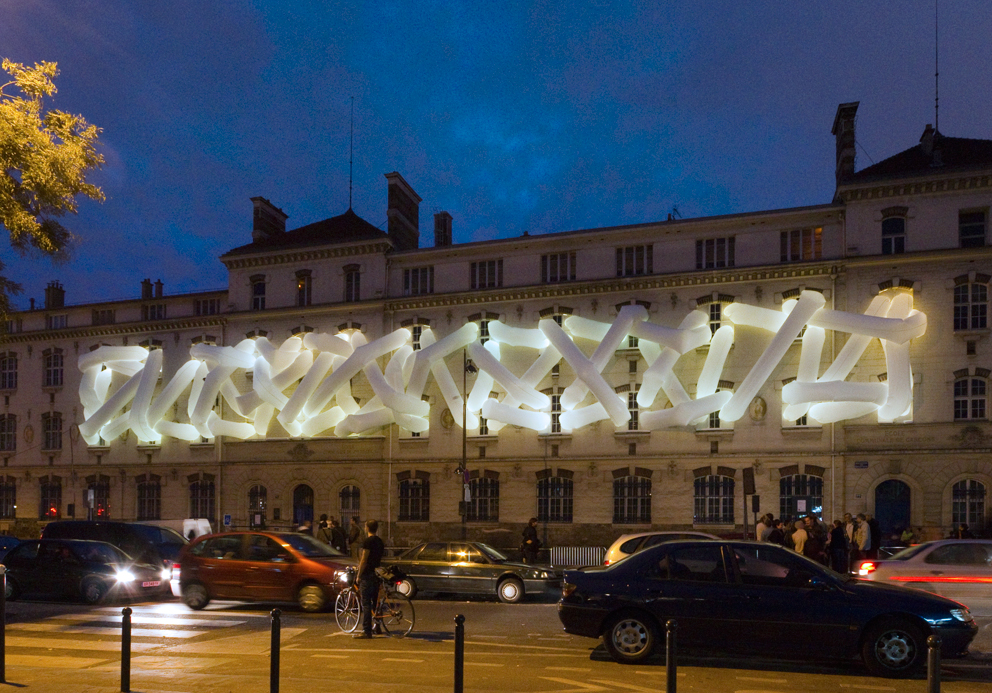 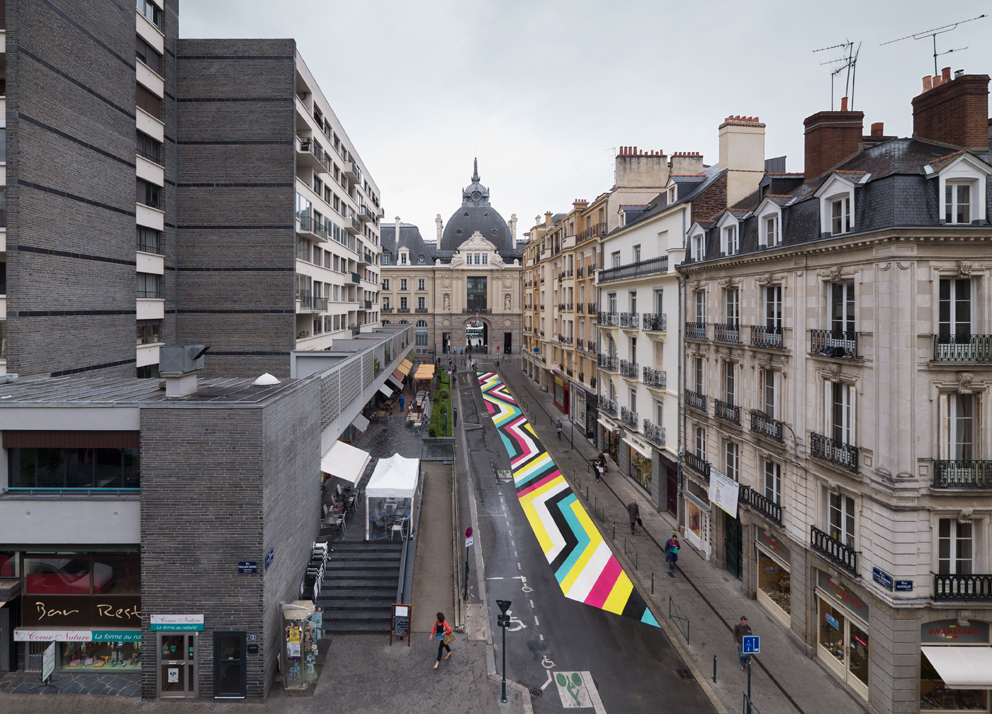 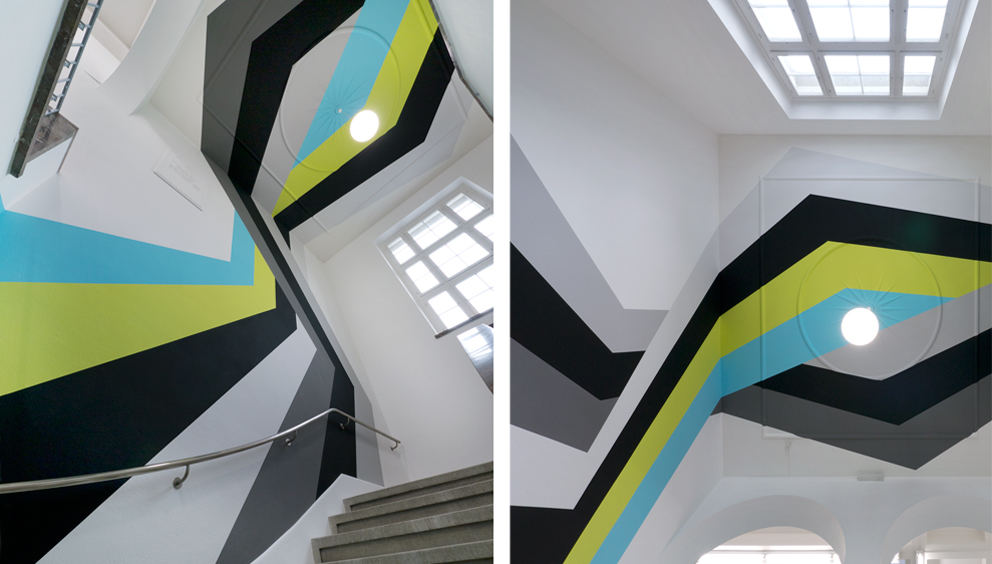 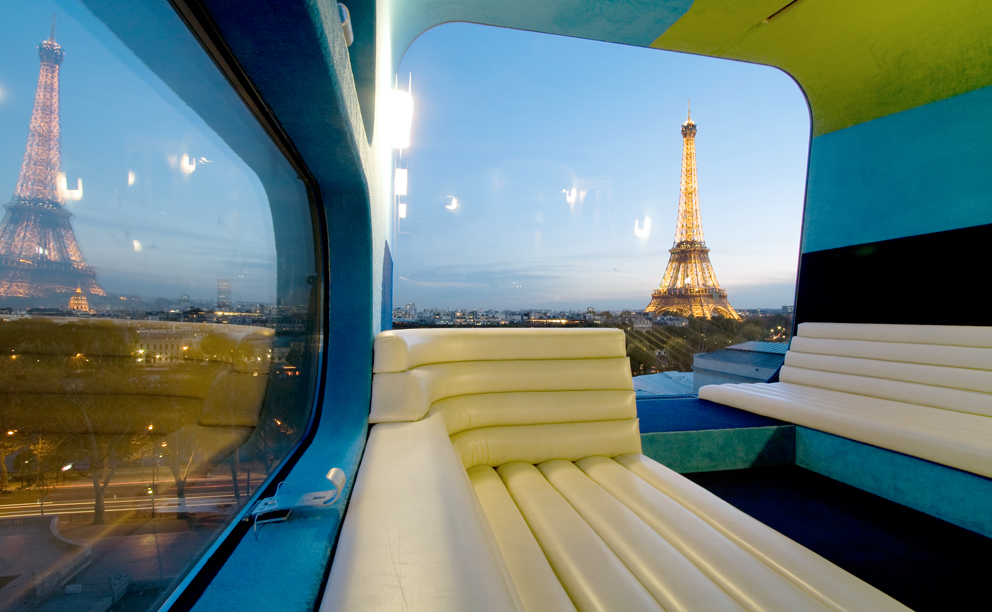 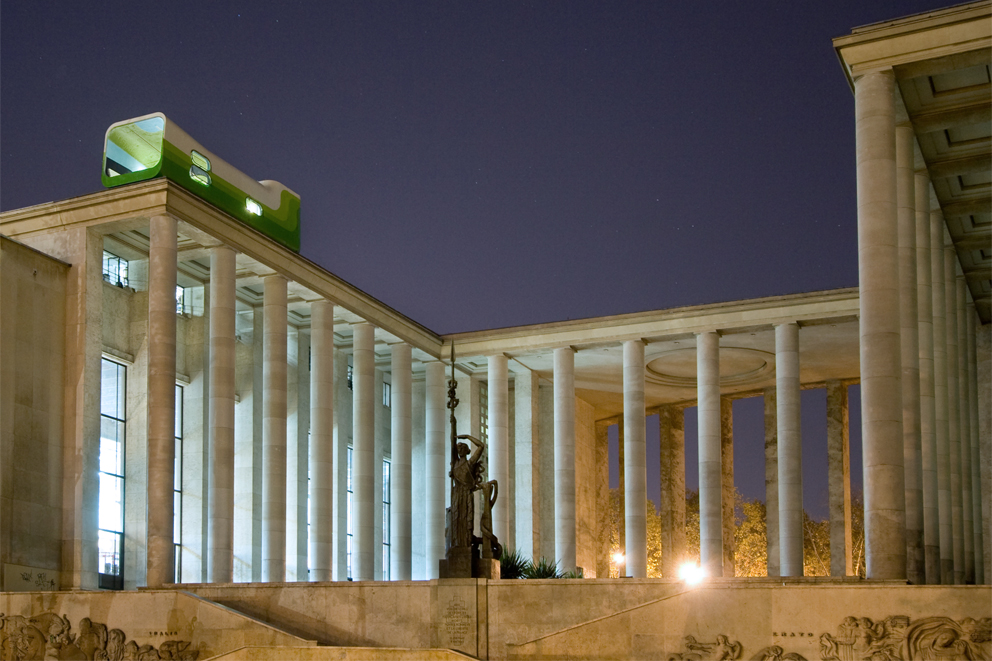