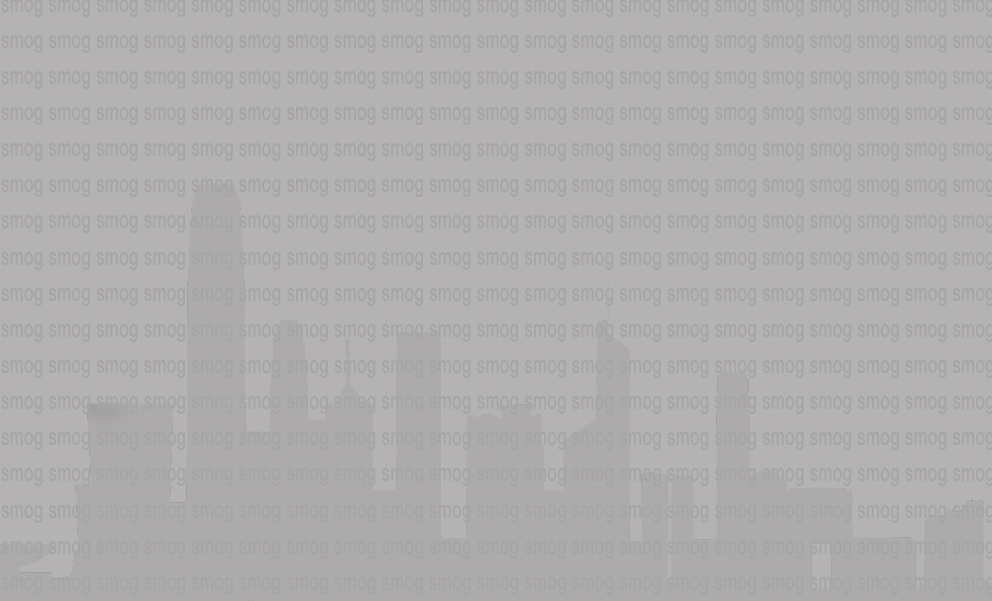 Lack of vision – then even the most impressive skyline is pointless.

There are various urban trends afoot at present. One, in the Global North, sees the face of cities changing as the focus on downtowns structured around cars gives way to polycentric conurbations structured around public transport systems, home offices taking the place of office high-rises, work and life no longer implying separate spaces, a trend back to bicycles. Another, in the Global South, sees the emergence of countless new cities, ever larger cities, often without infrastructure. While the conventional motor car holds sway in both geographies, with peak oil somewhere in the not too distant future and the desire to cut CO2 emissions becoming ever more pronounced, a mass market for e-cars cannot be so far away. Or can it?

The cities in the Global South often lack a mass transport infrastructure in the form of LRTs or buses, meaning diabolical, petrol-fueled congestion may be just round the corner. In the Global North cities lack an e-infrastructure, be it in the form of a dense network of charging stations for e-cars or e-bikes in downtown carparks, or readying sufficient renewable electricity for a massive future leap in the number of such potentially self-driving and self-parking vehicles. Is this due to a lack of holistic planning or possibly down to a lack of vision? Or is it simply a chicken-and-egg problem? A glance at the current status of the e-car indicates that the auto industry may have its head in the sand looking for ostrich eggs.

In 2014, total German auto industry spending on R&D was EUR 25.8bn. VW accounted for close to half that princely sum. What they spent it on is anyone’s guess, as it evidently did not go into reducing the emissions produced by diesel engines. Perhaps on boosting the efficiency of existing internal combustion engines (ICEs)? The fact is that ICE efficiency is never likely to get much past 40%, compared to e-car engines, which are about 95%+ efficient. Sadly, due to its infatuation with diesel, and despite the Energy Transition, Germany has lagged behind in developing e-cars. In fact, the roll-out of charging stations has been far from convincing. Sales of e-cars fell so short of government targets that in mid-2016, the cabinet tried to prime the market and committed funds (a mere € 300m) to promoting the purchase of e-cars, with German carmakers agreeing to cut the cars’ prices by the same amount. So far a total of 3,000 buyers have signed up for the scheme. 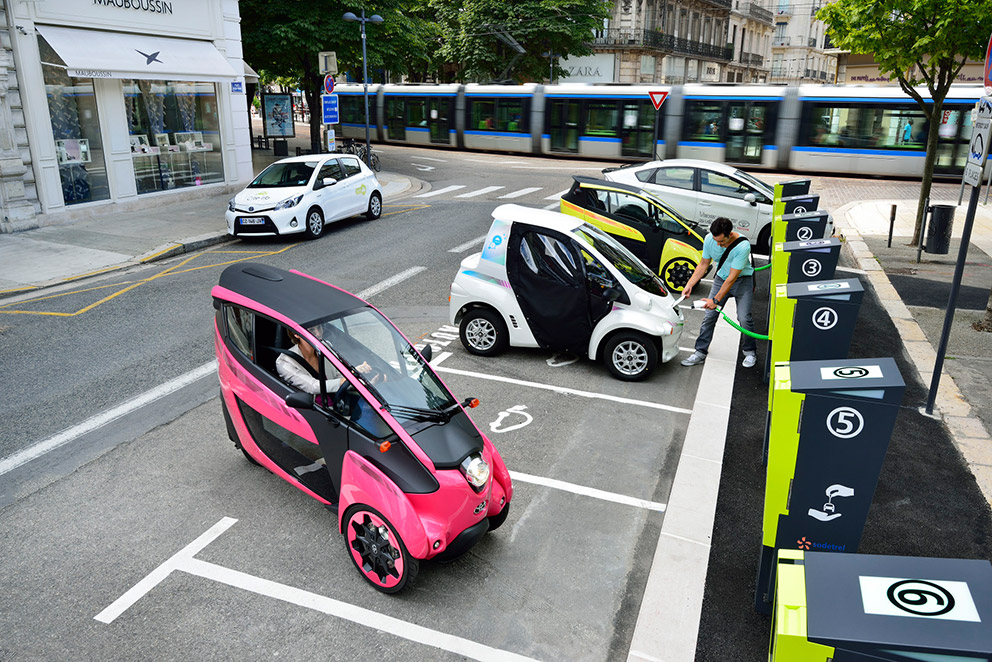 Model project for the city of tomorrow: Toyota has launched a car-sharing project with e-cars in Grenoble. Photo © Toyota

Something has gone wrong somewhere. Is it the lack of charging stations, the lack of ‘comfort’ connected with e-cars? The price-tag? Or simply that the politicians and the car-makers have forgotten that the emphasis should be on selling mobility systems, of which e-cars then form a core element? Post-diesel-disaster VW has now given in to the ‘wind of change’ and on June 16, 2016, announced its new group strategy for the future. It has resolved to transform its core business in order to focus on mobility (emulating Google and co.). In so doing, “given that unit sales of and the market for electric vehicles will surge in coming years, the VW Group will also be developing battery technology as a new field of expertise.” It apparently intends to commit in excess of € 10 billion to a battery factory, to create smaller, more powerful batteries that weigh less, spelling greater speed and range. And by keeping the battery technology in-house, moreover, maintain parts of a value chain that might otherwise get lost. This is mainstream e-car strategy.

Tesla’s new car pressed the same buttons. It does 0-100 in 2.5 seconds and more importantly has a range of 315 miles, which is what a tank’s worth of premium would allow. The strategy is obvious: Create e-cars that emulate their older combustion-engine cousins. And fight it out over whose e-car is most ‘efficient’, i.e. has the lighter/better battery.

Urbanization – the Internet of E-Cars?

Is the focus on batteries (and/or range) “what the market wants”? Well, that surely depends on where the markets of tomorrow will be. Which brings us back to the second trend mentioned at the outset, urbanization. The single largest car market today is China where there is a large informal market for chargers. In terms of the pace of growth, India leads the way. In terms of car sales, Asia and South America are already larger than North America and Europe. Deloitte, PwC, McKinsey all believe that with a huge swath of new middle-class consumers wanting to enjoy being car owners, the main sales markets of tomorrow will be China and India. Not to forget Africa, which still awaits mass-market auto-penetration.

In light of China’s ambitious climate change goals, and the exhaust fumes ICEs are already banging out there, it is hard to imagine that the country will not go ‘e’. And not use e-connectivity to enhance traffic management and mobility in its countless mega-cities. Internet platform Alibaba is already busy entering into the car-e-connectivity market. It recently “showcased its OS’Car technology in an SAIC Motor Corp. Roewe RX5 SUV model -- starting price 148,800 yuan ($22,000) -- that allows drivers to book a parking space, order a coffee and pay for it all using the company’s Alipay system. “We believe that in the future 80 percent of the car’s functionality won’t be related to transportation,” said Alibaba’s chairman, at the event introducing the vehicle in Hangzhou, China.” Words echoed a little later by AUDI’s Rupert Stadler when he spoke of his wish to transform the marque into a digital car company. The new value added chain will not be mobility per se, not just self-driving cars, but all the products along the way.

More to the point, for the massive metropolises in the Global South, the Internet of Cars should help prevent traffic jams by encouraging more efficient use of existing road spaces and better car sharing. Which takes us back to the question of e-car range and e-cars’ destiny. Because if the market is in the Global South, what type of e-car is needed there? Surely it is not smart to sell speed and range in these regions – that is just dressing the old up as the new. 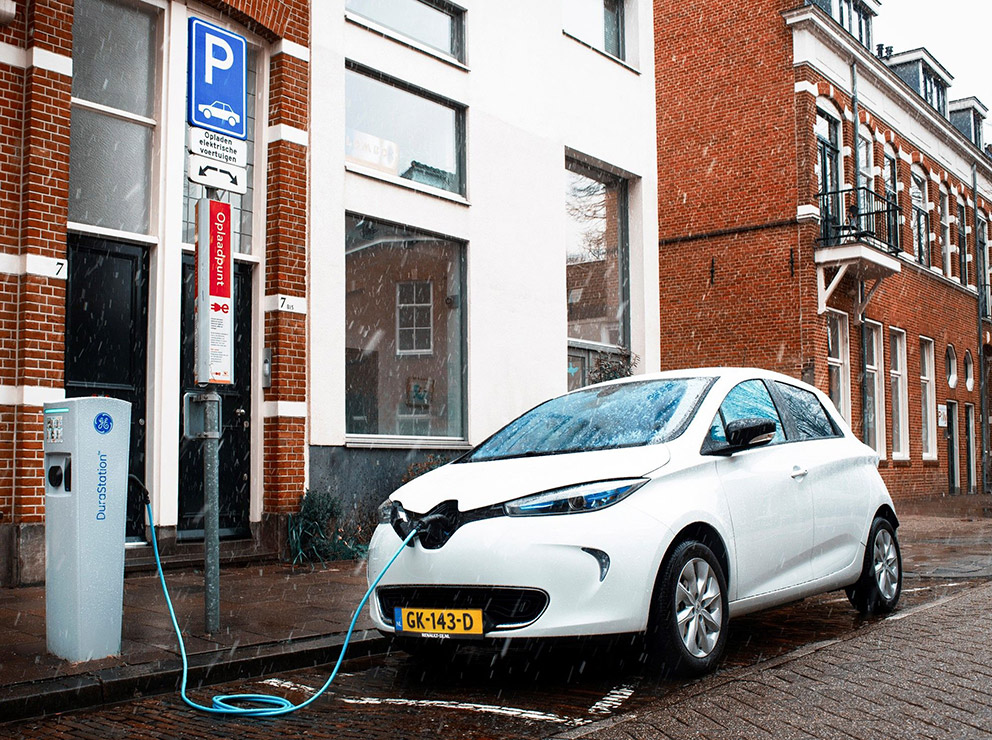 The Renault ZOE e-car has been on the market since ZOE. Photo © Renault

The more people pile into cities, the less space there is in them (which, of course, is also the case for cars). All the more the need for car-sharing, e-bikes, LRT, etc. And all the less the need for range. Take Lagos as a case in point: Members of the new middle class love their SUVs, testifying less to testosterone levels and more to social status (an attitude of “I no longer need to take a collective taxi or bus to work”). And they still use their cars almost exclusively to get to work. Now in Lagos that means driving a maximum of 30k in the morning, parking your car, and then driving home again after work. No big battery required if connectivity minimizes go-slows. And if you recharge during the 10 hours of office time. So perhaps, in the future, status will be expressed by an e-car’s range or the array of e-mobility features it has?

Take any other fast-growing mega-mega-city in the Global South: the trend is more or less identical. New Delhi, a sprawl of 1,500 km² at last count and no. 3 in the Wiki list of urban areas by population, has a CNG-driven public transport system – and the actual distances are not vast. The simple fact is that all those huge conurbations in the Global South differ from their smaller cousins in the North by having far higher population densities – by a factor of 2 upwards – in many cases the factor is 6-7 upwards. This means lesser distances to travel and more potential congestion, which translates into short-range e-cars and e-connectivity to sharing and traffic management systems.

Let’s face it: Battery development for long-range autos is for the Global North. What is needed in the Global South is short-range e-cars that can be charged during working hours. And given the lack of power in many of the emerging mega-cities, that itself is a problem – if there is no sunlight. Otherwise, solar panels on car ports are the obvious solution - and are already starting to be seen in the larger conurbations, less traveled by VW board members, I suppose . Plans are afoot for large solar-panel-covered car ports for ministries in Nigeria, for example. So one new core e-mobility field could be building smart roofs, not batteries in order to access the big markets of tomorrow. And offering effective intermodal e-mobility systems for the transition period until the Internet of E-Cars replaces the gas-guzzlers. 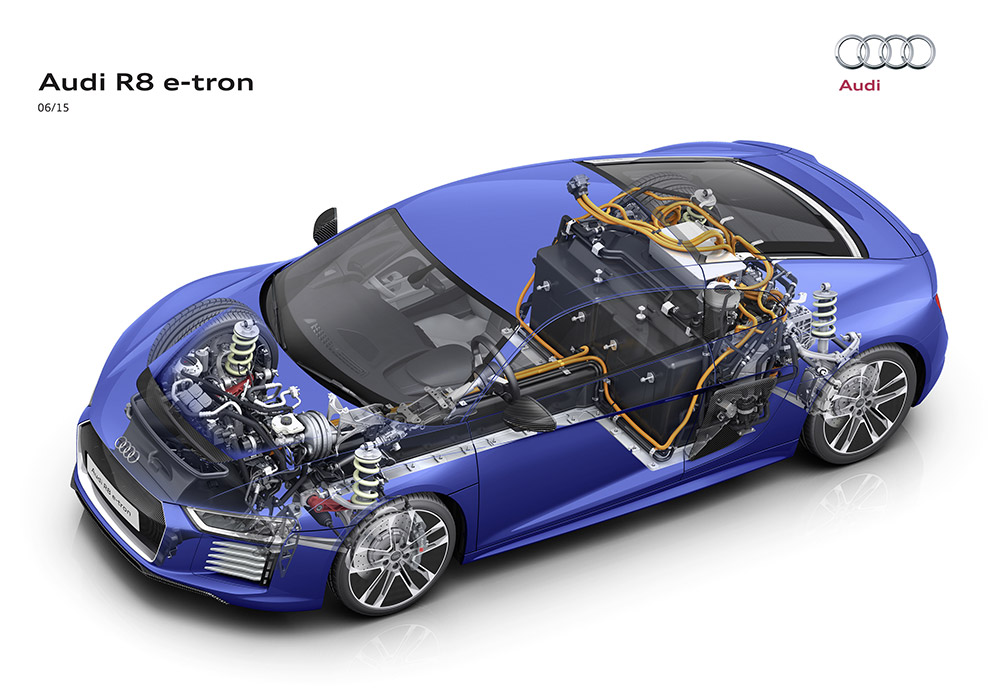 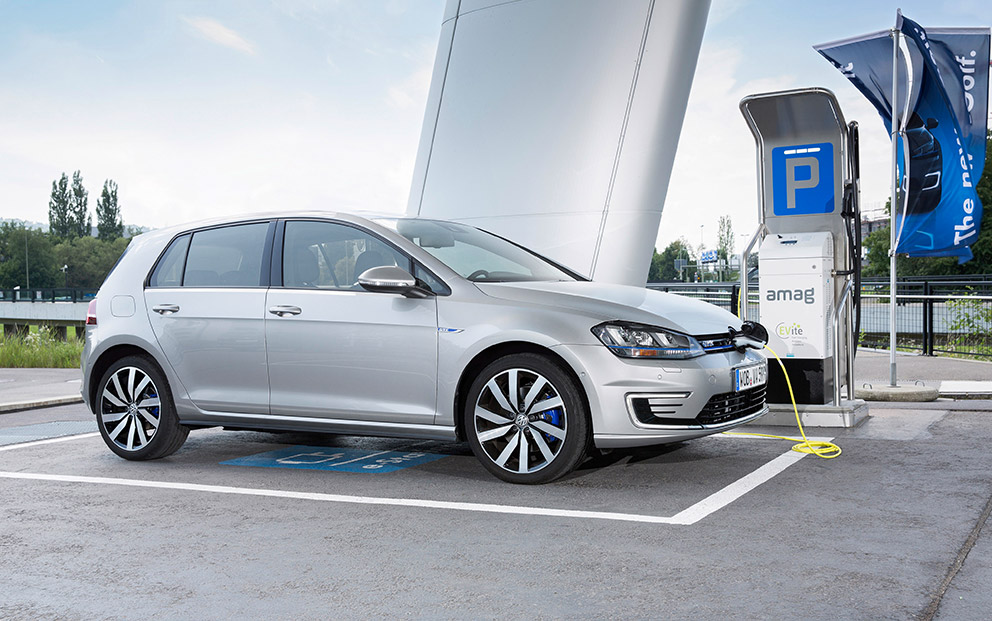 Electric drive instead of diesel disaster: The current VW Golf is at least already available in electric and hybrid versions. Photo © Volkswagen 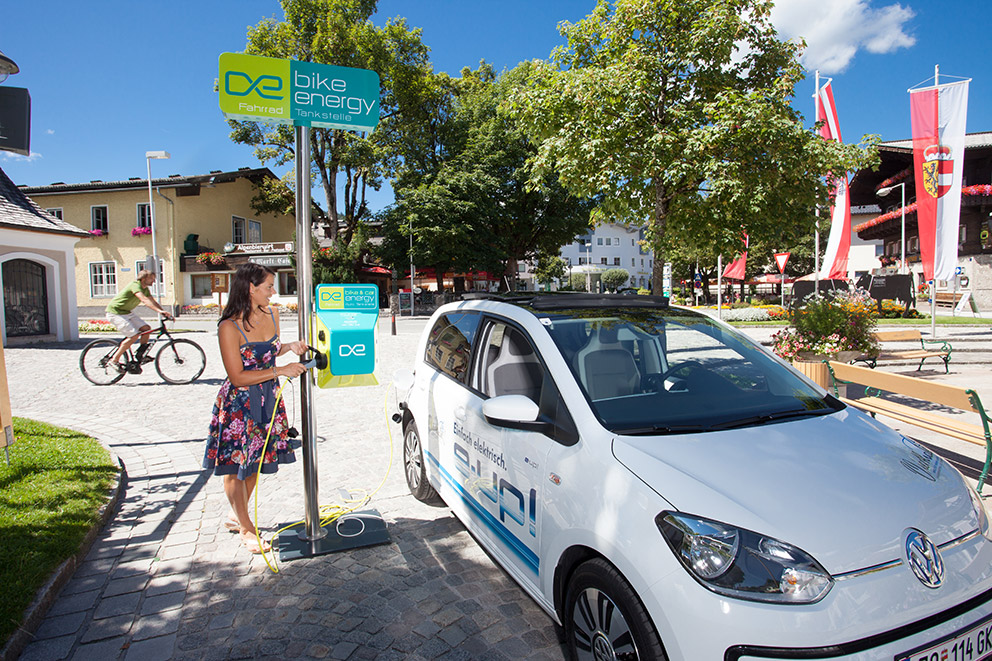 Power to go: The VW up can also be charged at charging stations for e-bikes and cars. Photo © bike-energy 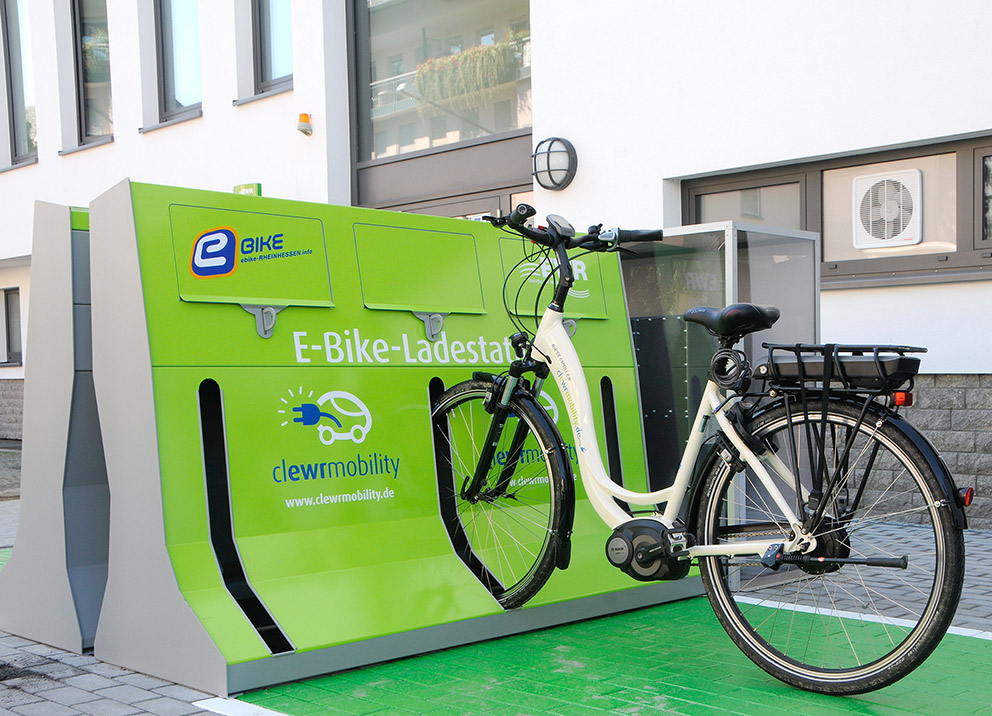