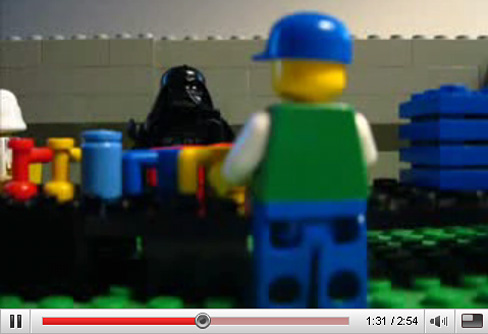 George Lucas’s “Star Wars” trilogy was, on the one hand, nothing other than a fairytale inflated by countless special effects, an American space saga on the destructive power of evil and the still greater power and irresistibility of the good – power-boosted with myths and stories told countless times over. On the other hand, the monumental film epic was also a tale of the political struggle for power. And it is fought in a truly archaic manner between the light and darkness, but is based on the conflict between different political systems, such as totalitarianism and democracy.

However, George Lucas not only used existing material for the narration, often transforming it in the process. The director has, for example, gone on record as saying that some pieces of the action and characters in Star Wars were inspired by Japanese director Akira Kurosawa’s 1958 movie, “Hidden Fortress”. And there are role models for the aesthetics of the interstellar tale of noble knights, down to the very design of the figures. For example, the black helmet worn by Darth Vader, the epitome of evil, is shaped after a Japanese Kabuto, not to mention the helmet worn by the arch-villain in Kurosawa’s “The Seven Samurai”, which also resembles Vader’s helmet. And the Jedi, a kind of order of knights from some earlier republic, are reminiscent of the Samurai as spiritual warriors and duelers with a strong sense of honor and duty.

Now, if a film reaches a cult status and shapes entire generations of young viewers, then it tends to itself become an object of adaptation and paraphrase. Exactly this has happened on YouTube, with the countless episodes of the “Lego Star Wars”, fueling the hope that the dark power will be beaten by means that are anything but bellicose. It has just as much to do with redesign as it does with marketing a decidedly successful Hollywood production in the area of merchandising.

If you watch the “Lego Darth Vader Canteen Incident” episode, then it soon becomes clear that the basic problem of a redesign or relaunch is solved here as simply as is the issue of power. For what we have here is definitely a redesign of the saga of the battle of good and evil, because here, too, constancy and modernization are juxtaposed. A successful product is given a new meaning. The core story of the battle for power is kept intact, but also undermined at another new level. The man serving in the canteen simply refuses to recognize Darth Vader’s power – which is why the latter’s attempts to wield it come to nothing.

Sometimes it evidently simply helps to ignore authority. A smile does the rest. Probably not a bad approach to revising the script and gaining scope for new perspectives. So there is not that bad a chance of redesigning or remixing serving as a way of gaining new freedom.