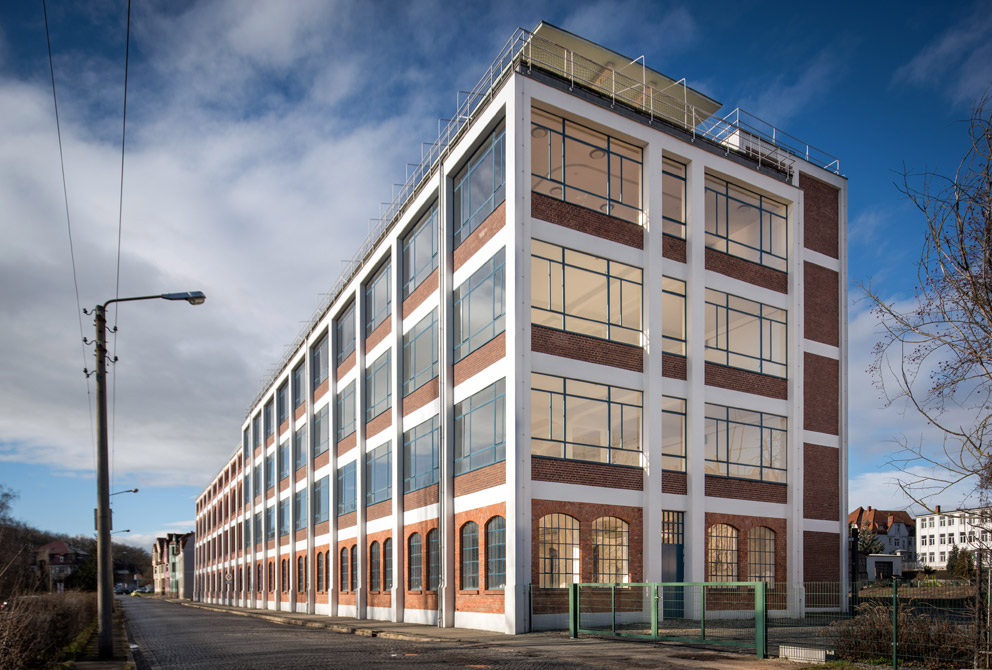 The so-called “Eiermann Building” simply does not fit. It does not fit the small town of Apolda on the northeast border of Thuringia, which is defined by small Classicist villas, a few larger brick buildings, and the post-War pre-fab blocks on the surrounding hills. Once a center of the textile and bell founding industries, the population of Apolda has been falling ever since the Great Depression and even its proximity to Weimar and Jena have not made the town any more attractive precisely for younger people. The Eiermann Building also does not fit into its immediate setting, which consists mainly of allotment gardens and overgrown wasteland. The former factory seems to come from a completely different, more modern and more optimistic age – which itself hardly fits the date of its commissioning, namely 1939. Like a slender, tall and friendly ship that was beached by mistake, the long block has stood here on Auenstrasse far too empty for more than 20 years now. As if this here was its anchorage and as if it were waiting for a new owner who would at long last set sail and head off with the entire house for new adventures.

Ahead of its day

In actual fact, the building was a highly modern factory well before Egon Eiermann came into play. For the new, mechanical weaving plant for the local textile corporation owned by Hermann Borgmann, in 1906-7 local architect Hermann Schneider devised an astonishingly progressive building: a bright skeleton of reinforced concrete with an open ground-plan and three and a half stories. In order to further emphasize the façade’s striking, fair-faced reinforced concrete pilasters he opted for infills between them set back slightly and using dark red clinker brick. Together with the high windows that emphasize the vertical thrust the result is a pragmatic and robust external appearance with light, shadow and reflections causing a constant interplay across the panes of glass. The inside boasted bright, stable rooms with versatile footprints that were structured by the location of the stairwells and functional shafts. The entire structure was clearly a modest working tool: solid, robust and convertible or extendable at any time. With its consistent exposure of the materials of which it was made and the flow of load-bearing forces, the building already pointed far beyond the functionalism of its day, although a good 50 years were to pass before the term “Brutalism” was coined. 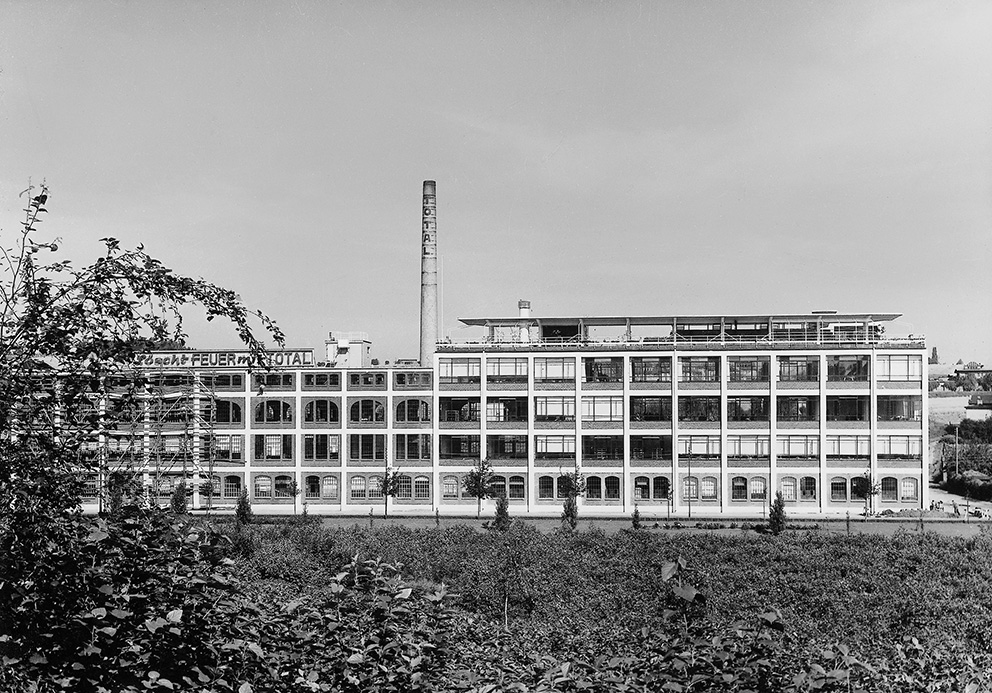 When designing the extension Egon Eiermann drew in 1938 on the characteristics of the existing building, but added modern elements such as large framed windows and the flying roof above the roof terrace. Photo Eberhard Troeger, © Saai Karlsruhe am Karlsruher Institut für Technologie, Werkarchiv Egon Eiermann 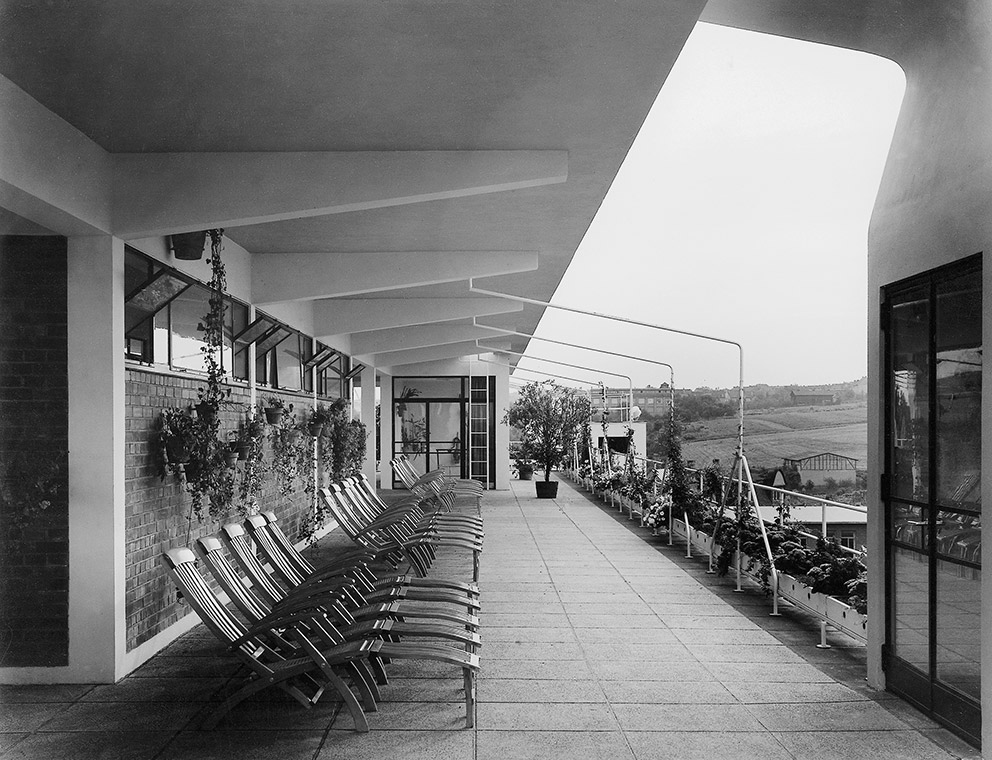 The weaving plant flourished and two additional axes were added to the existing nine in 1919 – for practical reasons they were slightly higher, but the grid and the characteristic façade were upheld. Then came the Great Depression and Borgmann & Co was not to recover from it. In 1936 the entire grounds were then abandoned. Lured by promises and assistance, the city managed to get fire extinguisher manufacturer Total to relocate from Berlin to Apolda. Until the end of the War extinguishing equipment and systems as well as, paradoxically, flamethrowers for the German Army were made here. The task of designing the expansion required for all of this was entrusted in 1938 to Egon Eiermann, just 34 years old and still largely unknown.

With manifest respect for the existing fabric, Eiermann developed an annex based on the same structural and aesthetic principles. He clearly did not worry about subsequently upholding symmetry as he started the conversion in the two axes later added to the building, leaving them as they were, merely replacing the window spaces in the upper three floors and “emptying” the interior. He then added eight further new axes, adopting the depth of the building, the size of the axes, and the story heights. Instead of the clinker-brick sections he opted for large modern steel-frame windows and had the fine profiles painted light blue on the inside. In this way the two parts of the factory, the shape of the largely unchanged old building and the new addition, could be clearly distinguished from each other, but formed a unity, primarily thanks to the continuation of the grid layout of reinforced concrete; it resembled a set of shelves half of which had been given new drawers. 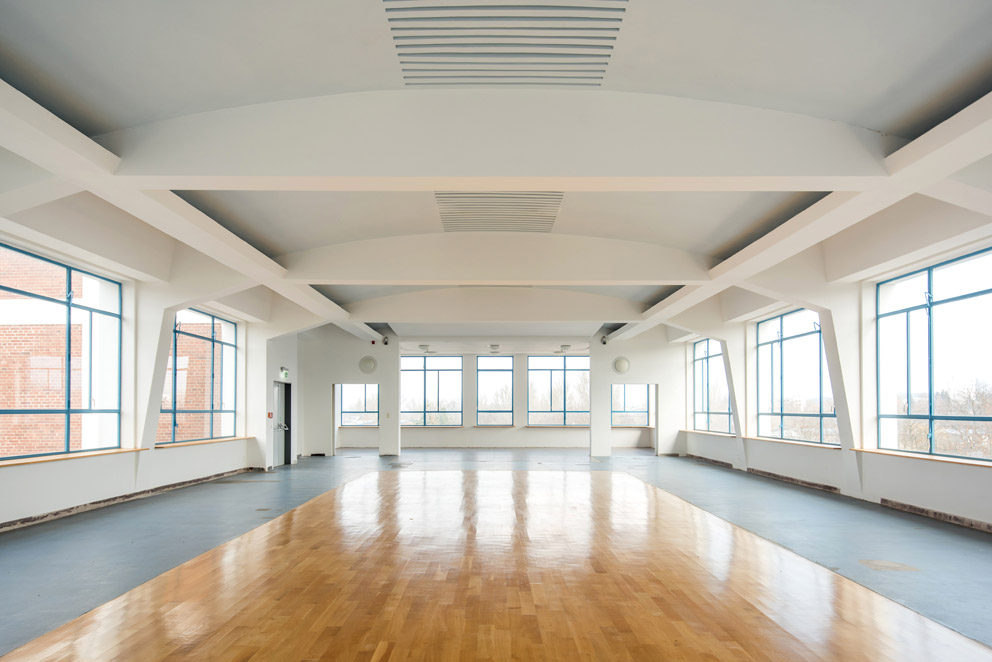 Loving attention to detail: The dining hall floor consists of square light blue mosaic tiles. In the middle there is wooden parquet inlay. The stairs lead to the upper deck, or rather the roof terrace. Photo Thomas Müller, 2016, © IBA Thüringen

On the inside, Eiermann opted for restraint for three stories: The ground plans are as open as in the original build, but thanks to what are now larger windows now seem clearly brighter and more transparent – a fascinating effect because one wonders whether the rooms aren’t a little larger or higher after all. However, on the fourth floor there is a surprise in store which transforms the building into a unique element of German industrial architecture and most certainly makes it a monument. Here Eiermann added a spacious canteen, suffused with light and where the refectory’s ceiling structure departs from the rest of the building so dramatically that it requires absolutely no pillars. With the large windows, the expansive view and a surprising floor made of small, bright-blue mosaic tiles into which in the middle of the room wooden parquet has been inserted as a precious inlay, the space is more reminiscent of the dance hall on a cruise ship than a company canteen in a factory.

Continuing the maritime associations, next to the meal hatch with its finely structured functional glass-and-steel wall is a slender standalone staircase with a railing made of thin tubular steel painted white and running slightly a-rhythmically up three flights and through the space up to a marvelous roof terrace, which seems as little to belong here as it does to the building as a whole. The “railing” consists of the same fine, white metal rails and long tubes connect it to an elegant flying roof. Along the edge of the roof plant tubs have been integrated into the railing and climbers grow up from them onto the roof in an effort to provide pleasant shade – as if this were a sanatorium in an especially warm part of the world. The air extracted from the canteen is by contrast fed through a far-too-large oval shaft, with a riveted sheet metal cladding that is again painted white and leaves no doubts that it is supposed to resemble a ship’s funnel. At the terrace bows there is a flag mast. Was all this really meant seriously? Eiermann had transformed the 19th-century weaving plant into a cruise liner and the workers (at least during their breaks) into passengers on a cruise through Apolda’s green gardens.

The building’s quite striking dynamic tension arises from a leisurely combination of the brief set by the original build and the radically applied idea of the new. Eiermann’s method of an interpretative continuation of the old certainly parted company with those ideas of early Modernism that simply wished to dispense with the traditional and with what had arisen over time. 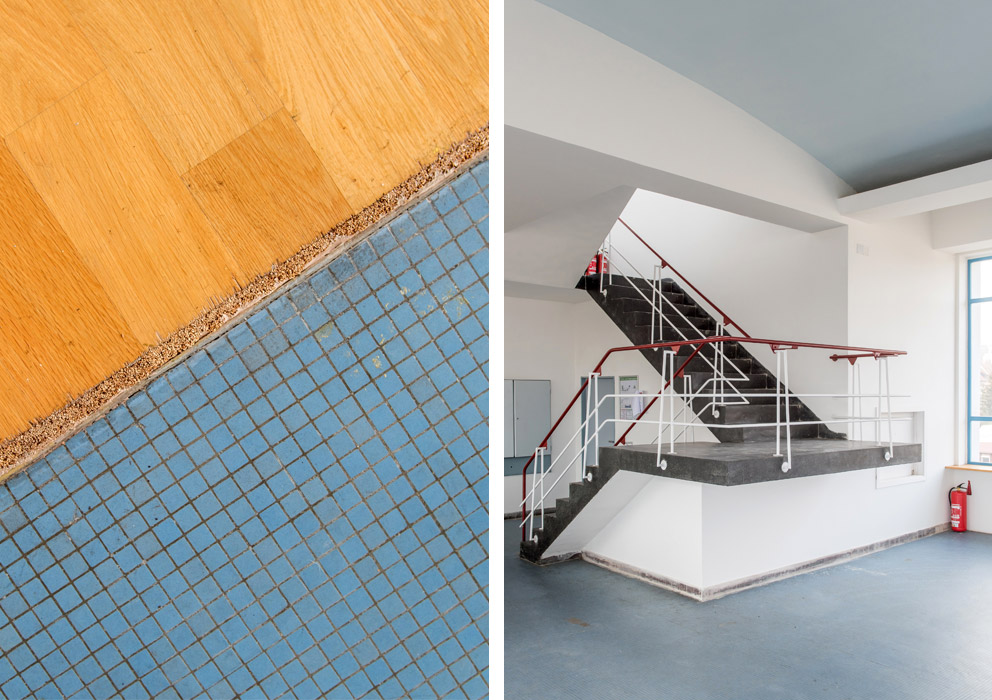 Heritage listing, then nothing

When World War II broke out all construction work on site came to a sudden halt, although Eiermann had foreseen additional buildings, too. After 1946 operations continued as VEB Feuerlöschgerätewerk Apolda and at some point the proud curving neon word “Feuerlöschgerätewerk” was installed on the flying roof – where it remains to this day. In 1980 the East German administration included the building on its heritage list and in 1992 it was placed on the same list in the newly united Germany. Production was however discontinued in 1994. All efforts by the government transition and fiduciary agency and the current owners, the Gesellschaft zur Sanierung und Entwicklung von Altstandorten (GESA), to find a new permanent user came to nothing. The “bride” was repeatedly made beautiful, as in 2004-5 garages and the ancillary buildings on the grounds were demolished and in 2010-2 the vacant factory building was extensively modernized while upholding the heritage substance: the outer grounds were redone, the missing original windows, entrances and luminaires resurrected. A new user was nevertheless not to be found.

As a result, in the greenery of Apolda a proud ship now stands, so slender, more beautiful and emptier than ever. But there is hope. A committed private circle of fans has since 1999 been keeping interest alive, organizing events and the occasional exhibition. Once could almost say they keep the engine room running. In 2014 the Eiermann Building was included in the program for the IBA Thuringia which, in summer 2016, as a first step to reactivate the place, joined forces with Wüstenrot Stiftung to host a two-week workshop for students. The participants were allowed to camp out on the open floors and swiftly installed a ping-pong bar on the ground floor, where they discussed future use scenarios for the building with a variety of international guests. The result was that in Apolda we got an idea of what young people would do with such a building. And at the same time it became clear that this breathtakingly beautiful building’s main problem is most probably simply its location in Apolda; in Leipzig, Berlin or Dresden it would have long been occupied by a few dozen young creative minds. In Apolda, by contrast, the future course of the MV Eiermann remains unclear for the moment. 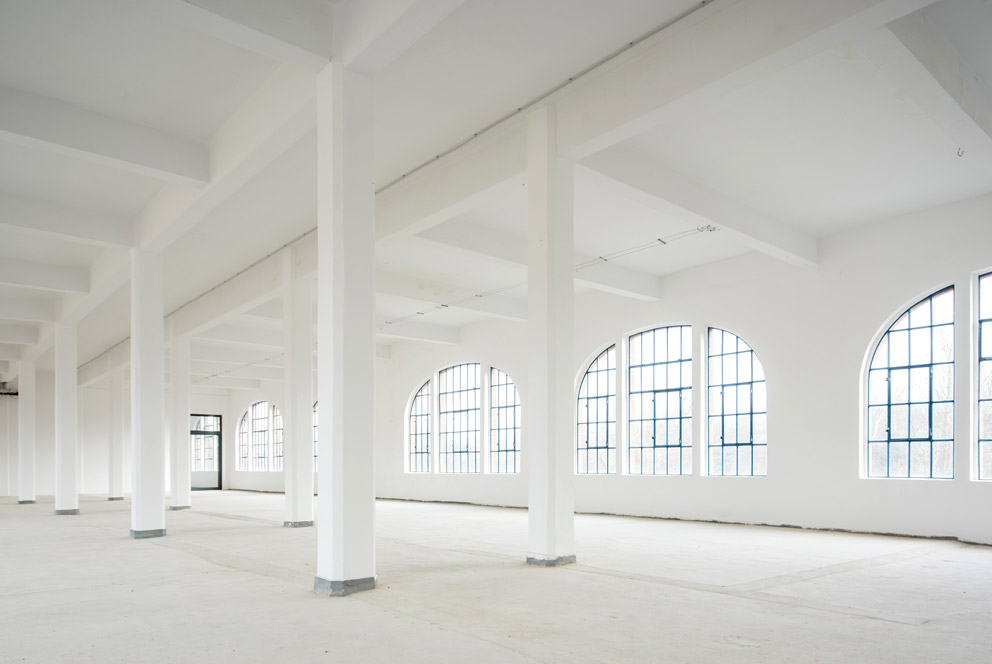 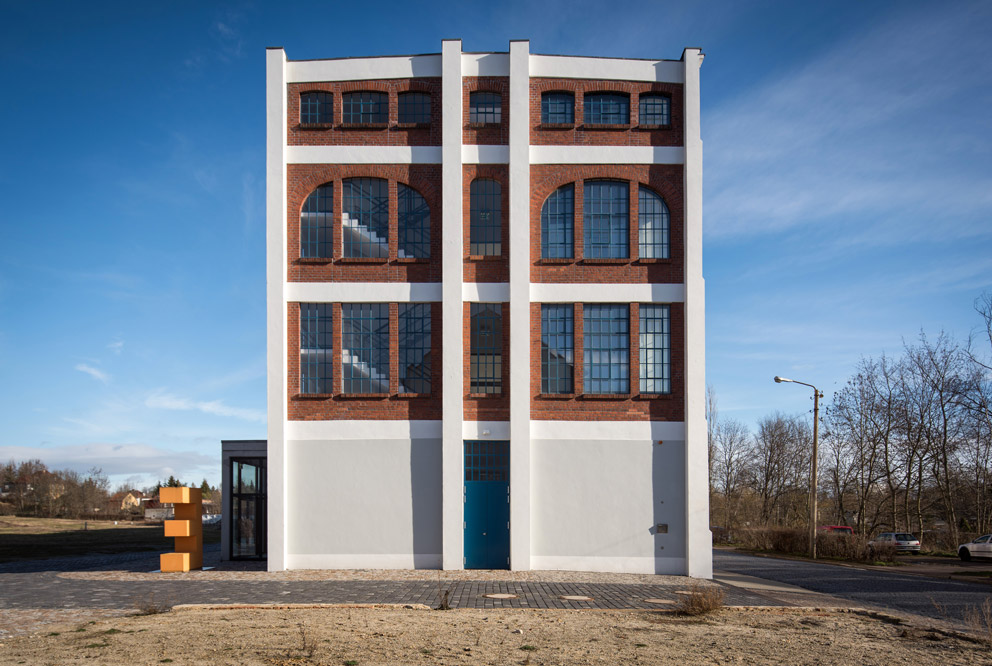 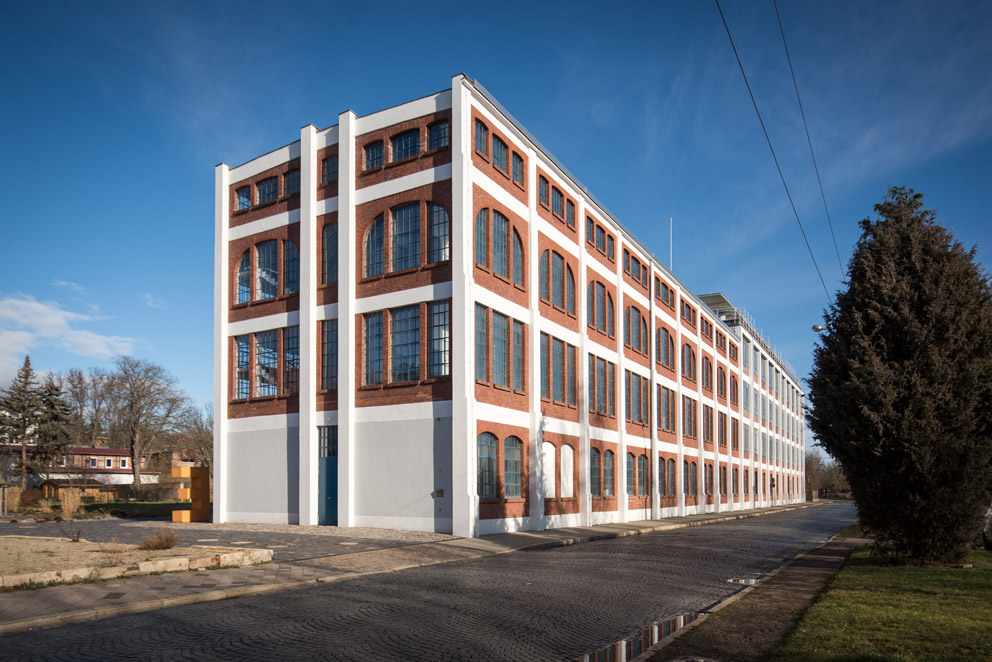 The impressive structure has been a heritage building since 1992 and vacant since 1994. A circle of fans have since been championing it, occasionally arranging exhibitions and events there. Photo Thomas Müller, 2016, © IBA Thüringen 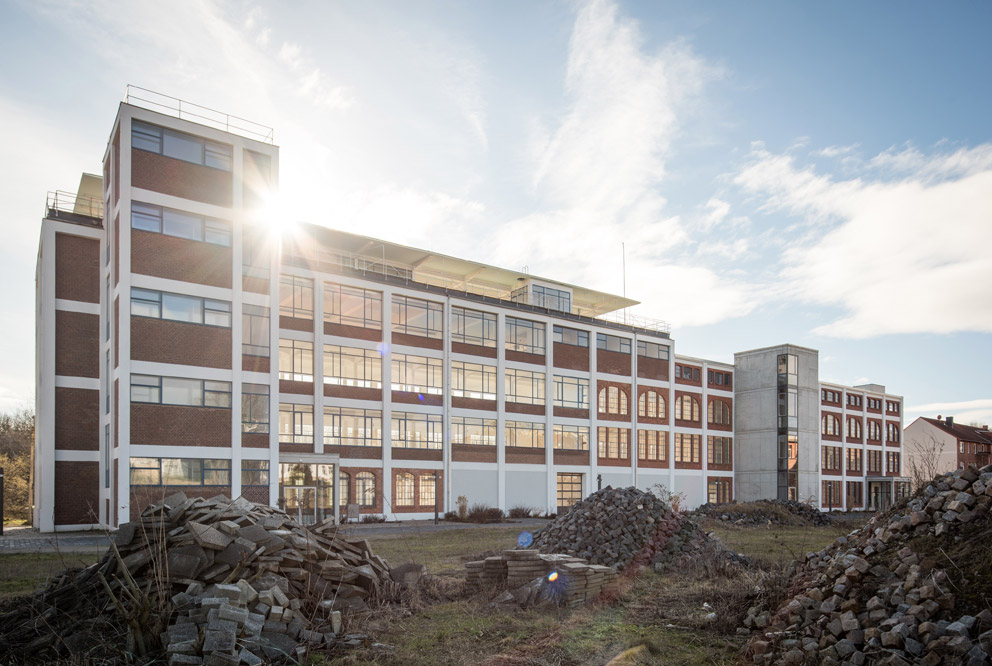 The grid of the reinforced concrete structure painted white was continued by Eiermann including the clinker niches, and this ensures the building has a uniform appearance. The different window formats distinguish the new from the old. The concrete stairwell was added when the building was modernized in 2012. Photo Thomas Müller, 2016, © IBA Thüringen 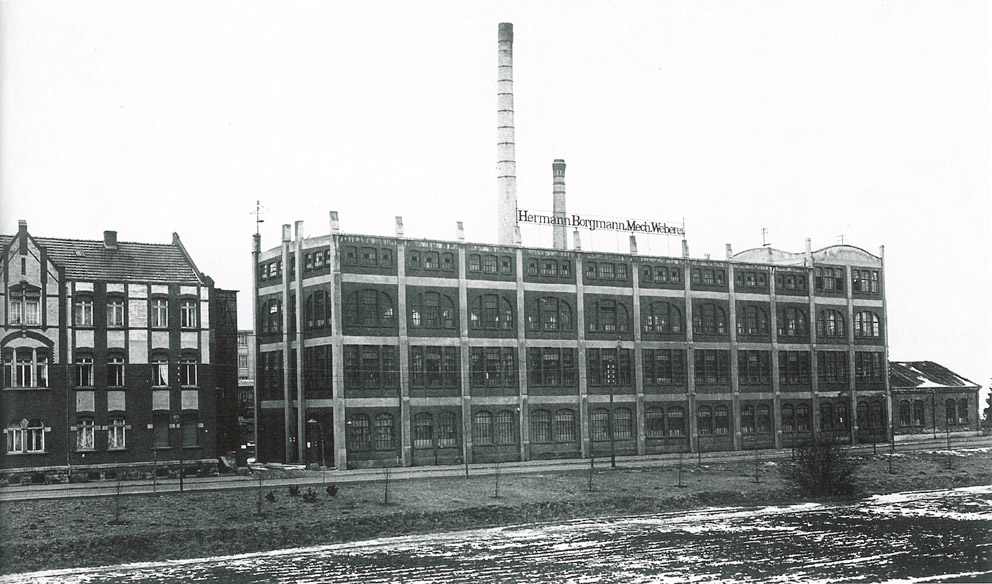 The original building designed by Apolda’s own architect Hermann Schneider featured nine axes. In 1919 at one end two other, slightly higher axes were added (on the r.).
Photo © Stadtverwaltung Apolda, Municipal Archive
Advertisement