Things got controversial at the “Architecture Matters” conference in Munich: Patrik Schumacher discussed his radically pro-liberal market theories and captivated his audience.
by Fabian Peters | 3/13/2017

The event’s main battle had been scheduled for the early evening. Here, a gifted provocateur was to meet two worldly-wise doyens of the trade. The provocateur in question: Patrik Schumacher, international architect, architectural theorist and Zaha Hadid’s successor in the office carrying her name. Since last year at the very latest he has also been the enfant terrible of the architectural world, having called for radically pro-liberal market policies at the World Architecture Festival in Berlin (see our article “Thinking with the wrecking ball” from December 12, 2016). The media resonance was colossal in the run-up to the event, as was the ensuing hostility towards the speaker. And his discussion partners at the congress in Munich are heavyweights in their own right, namely, Munich-based Professor of Philosophy and former cultural secretary Julian Nida-Rümelin, and Chief Planning Director of the City of Hamburg Jörn Walter, who is currently coordinating one of the biggest urban planning projects in Europe, the HafenCity.

The roles were clearly assigned from the start: Schumacher rode his hobbyhorse, vehemently defending his position and making it clear that he believed government action in any area whatsoever should be the last resort only – in his mind, private companies always produced the better results. He further indicated that this was his opinion not only with regard to building policies, but also when it comes to other areas of society: He sees neither the private administration of justice nor private governments that have not been democratically legitimized as being taboos. Jörn Walter of course advocated the primacy of state action and thunderously warned of the impending Gomorrah of unfettered markets. Nida-Rümelin, seated between the two, started off in an elder statesman-like role, trying to balance out and frame the conversation, but towards the end resorted to lecturing and dishing out advice to Schumacher, as he seemed to be finding the latter’s historical interpretations somewhat too eclectic.

Even though the public was for the most part opposed to Schumacher’s arguments, he still seemed to be saying what was on at least a few people’s minds when he scolded the institutions. The fact that Schumacher’s neo-liberal theoretical construct resonated with self-employed architects should not come as a surprise. And of course he is entitled to demand changes that would provide him personally with ideal working conditions. It might even be seen as refreshing when someone frankly requests what he regards will provide him with the biggest advantage. Schumacher would have liked to carry on sparring after the allotted time for the debate ran out – and the audience would have been delighted, as the hour-long discussion had already provided a highly entertaining spectacle.

Prior to this other speakers at the conference had offered interesting insights into a wide range of architectural topics in their respective lectures: Emanuel Christ, one half of the currently highly successful architect duo Christ & Gantenbein, gave an entertaining and informative overview of his studio’s activities. Muscovite architect and architectural theorist Kyrill Ass shed light in his talk on two historical continuities of the Russian capital, which shape architectural activity to this day, namely the self-restraint of broad sections of the population in terms of their requirements of their own apartment, and the unmistakable pompousness of the state in prestigious public building projects. Ass talked about everything from Tsarist Russia to Lenin’s resettling and expropriation measures and Stalin’s ‘gigantomania’ to the policy of restoration under Putin.

Perhaps they should have limited the number of speakers more strongly, for as the evening wore on the crowd noticeably thinned out. And that was rather a shame for the final speaker, Belgian architect Freek Persyn from Brussels-based studio 51N4E, and for the video-supported performance by Australian artist Liam Young. In his workshop report Persyn described a working method far removed from the large-office operations à la Zaha Hadid Architects. In 2005 the studio 51N4E won the competition for a high-rise in the Albanian capital Tirana. Yet it quickly transpired that the steel skeleton structure they had planned would be unfeasible under the local conditions, and the architects were forced to completely rework their design in order for it to be realized. Yet they were not discouraged by this experience – on the contrary: Some time ago they won a second competition in Tirana – this time for the redesign of Skanderbeg Square in the city center.

Finally, Liam Young performed an enthralling reading of a text accompanied by video sequences he had designed himself. They showed the sensory information gathered by a self-propelled vehicle – an odyssey through an urban landscape devoid of people, a journey to the shady sides of the smart city, whose age is just dawning. Those who finally headed for home shortly before midnight had heard a great deal that was deserving of further thought. In any case, the conference certainly lived up to its own intention to explore “cities and the future.” 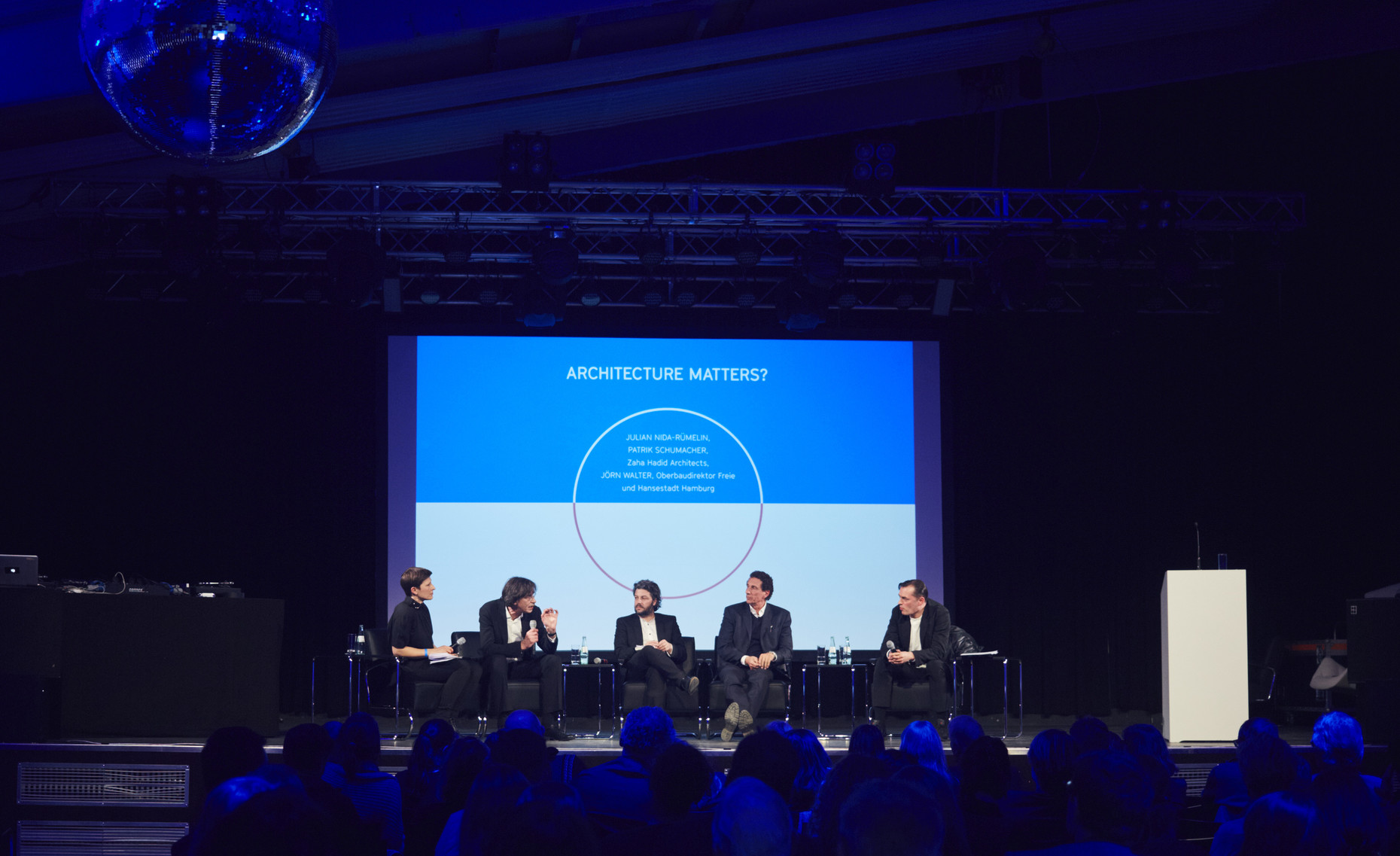 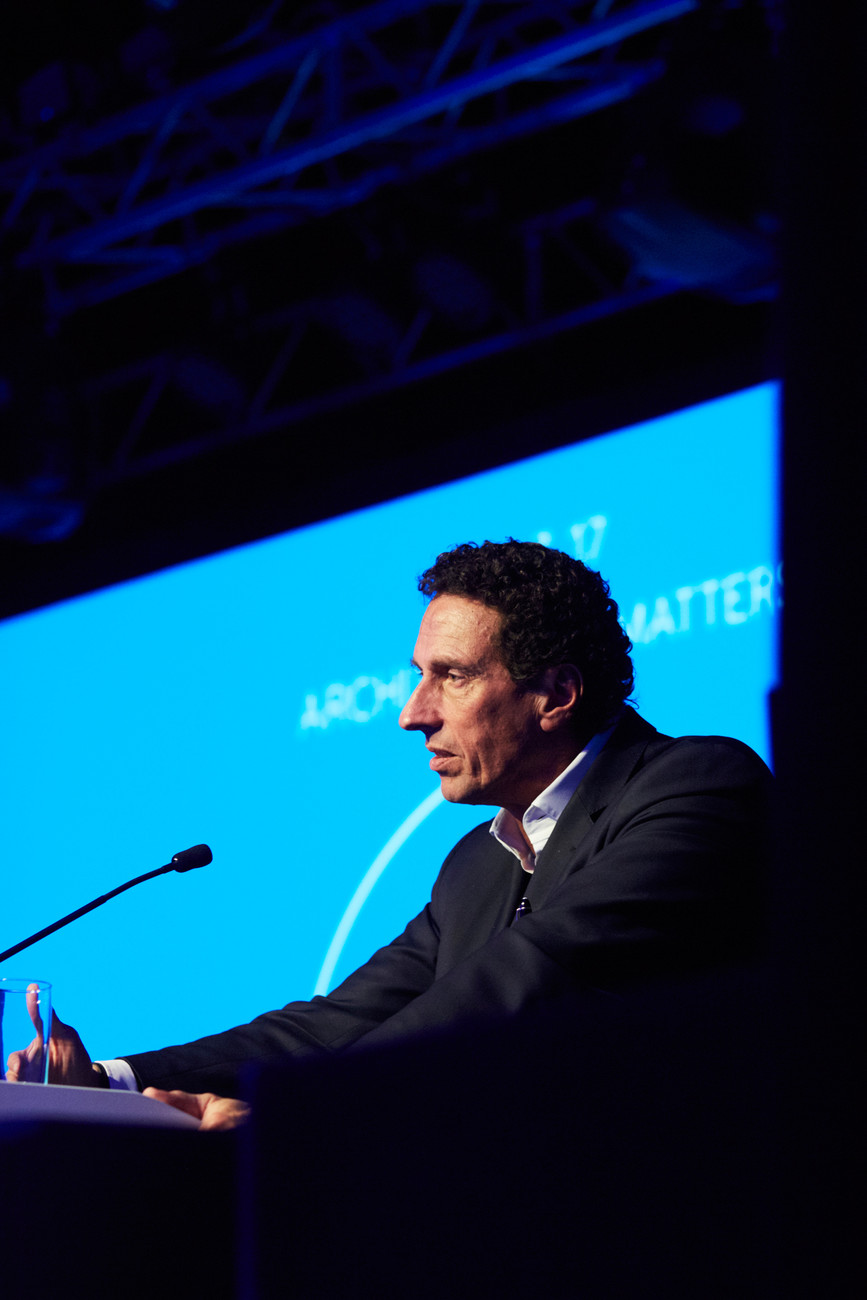 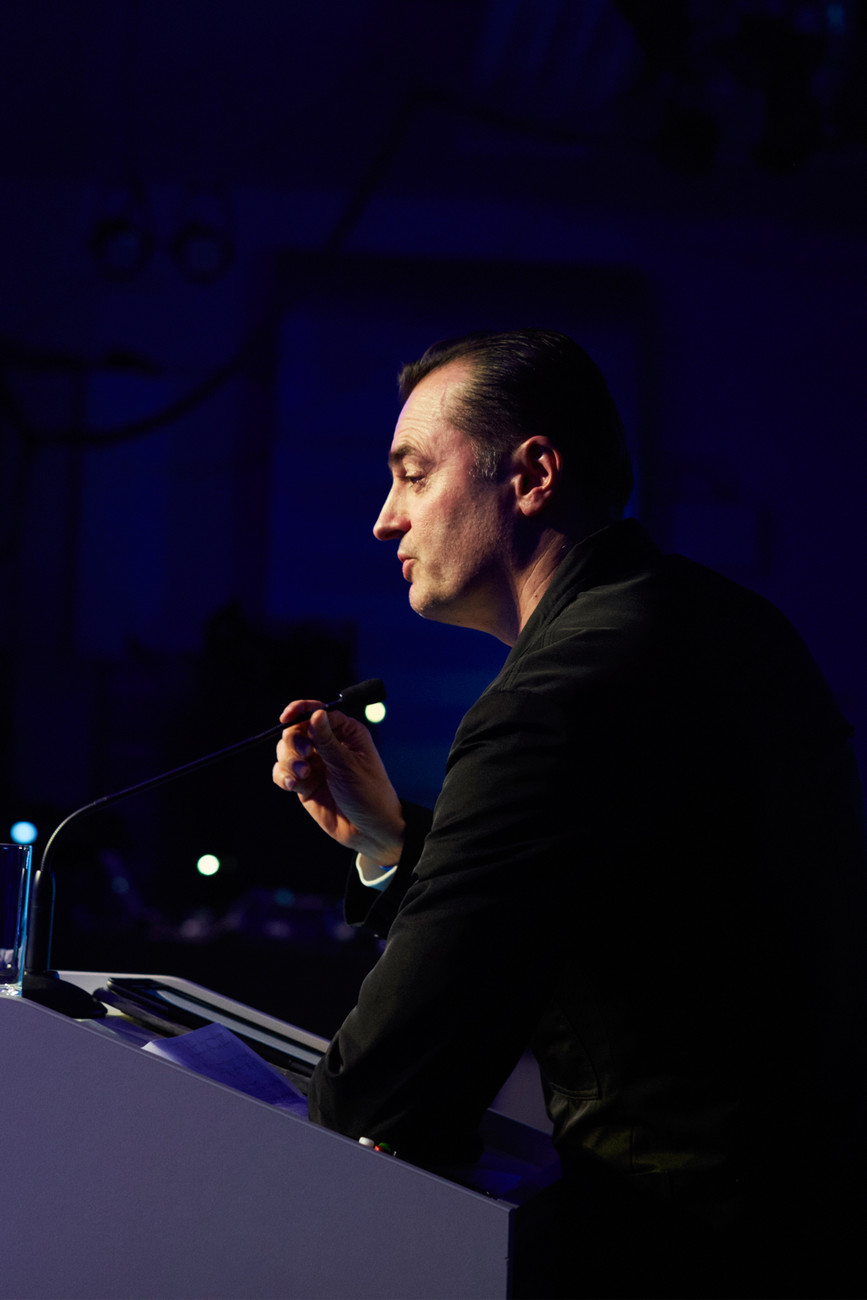 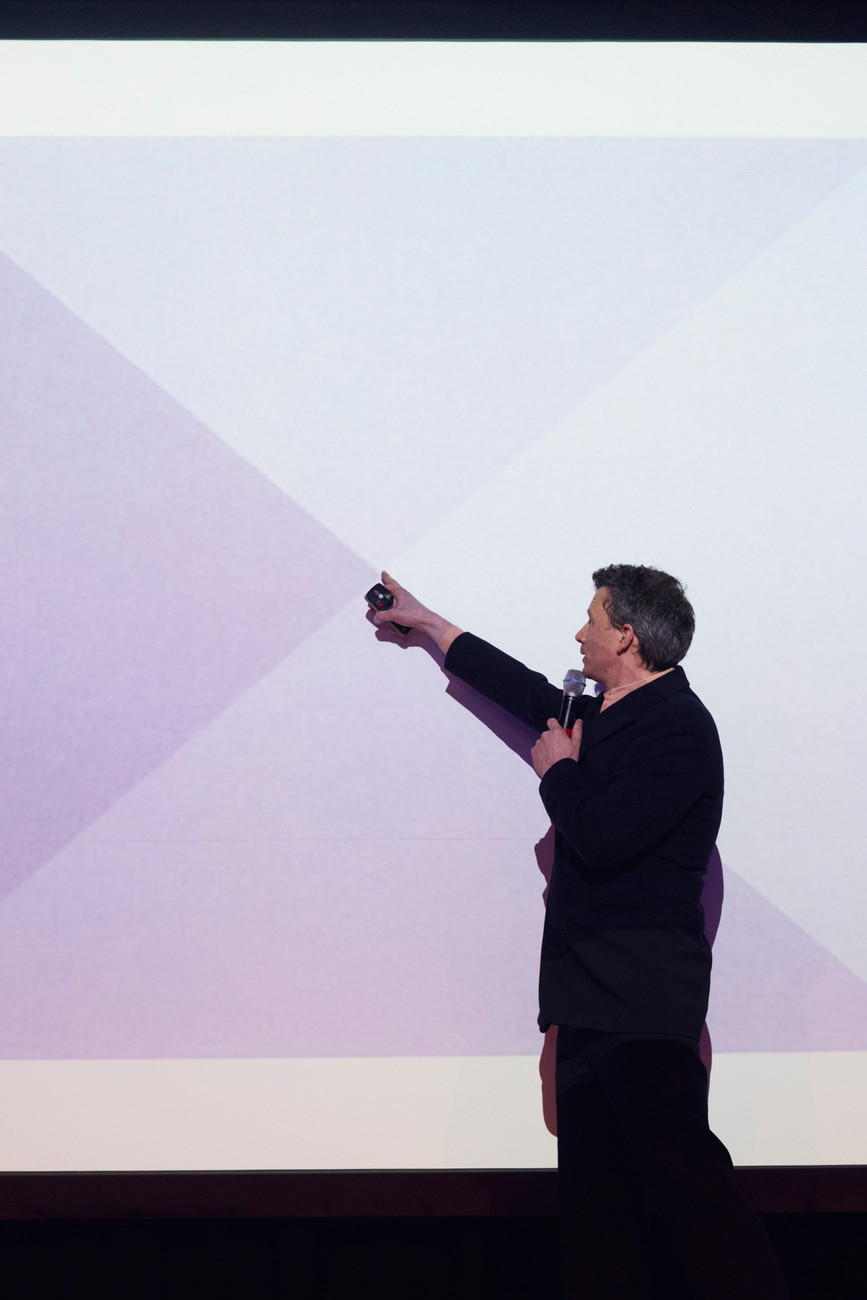 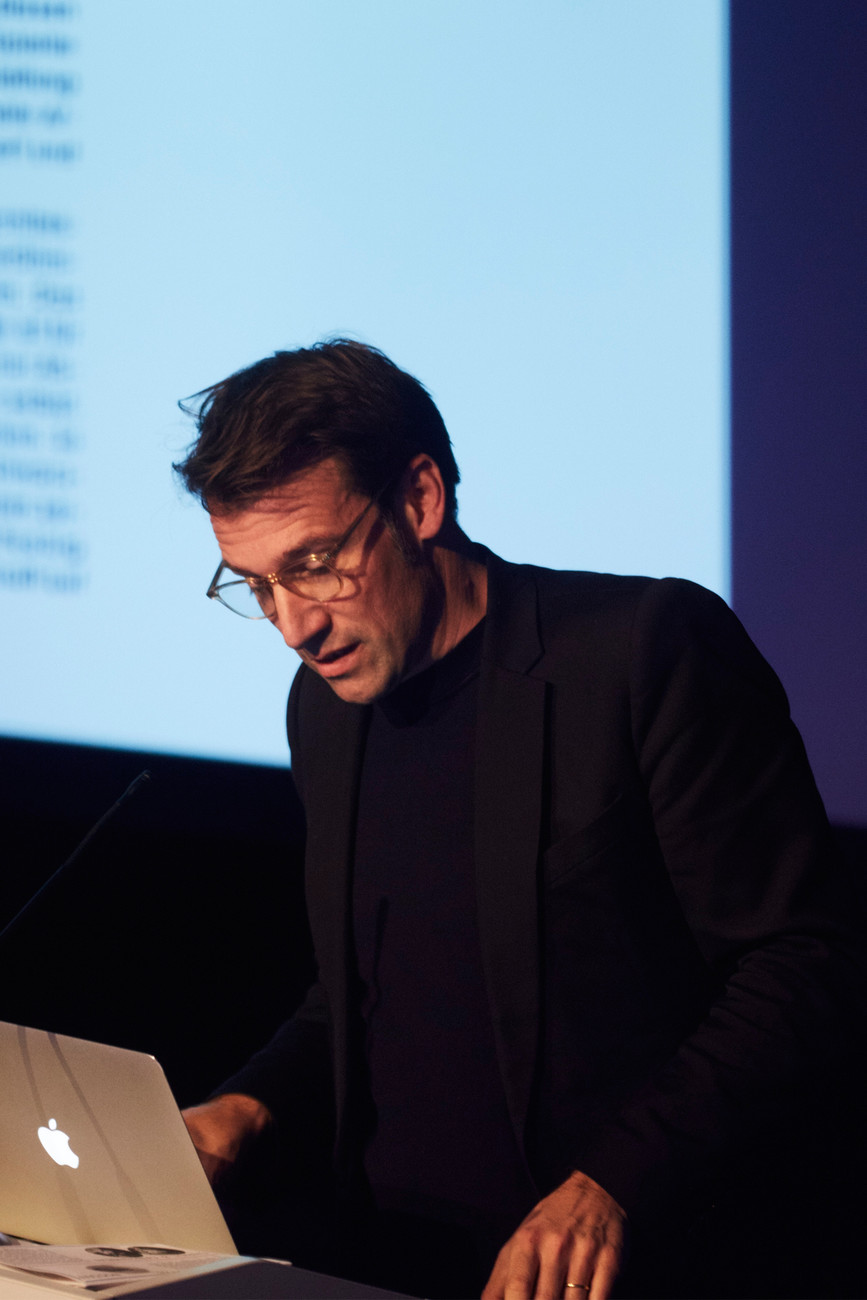 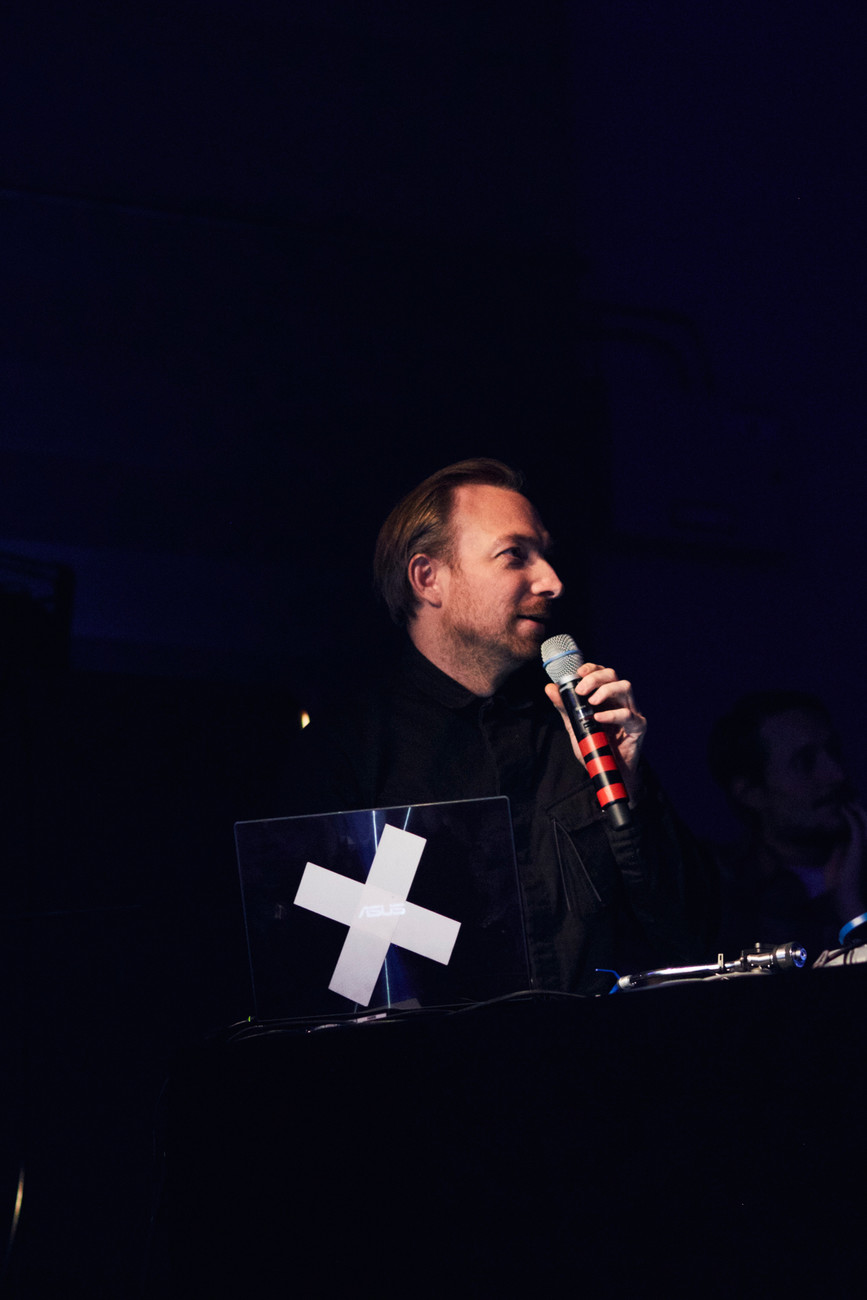 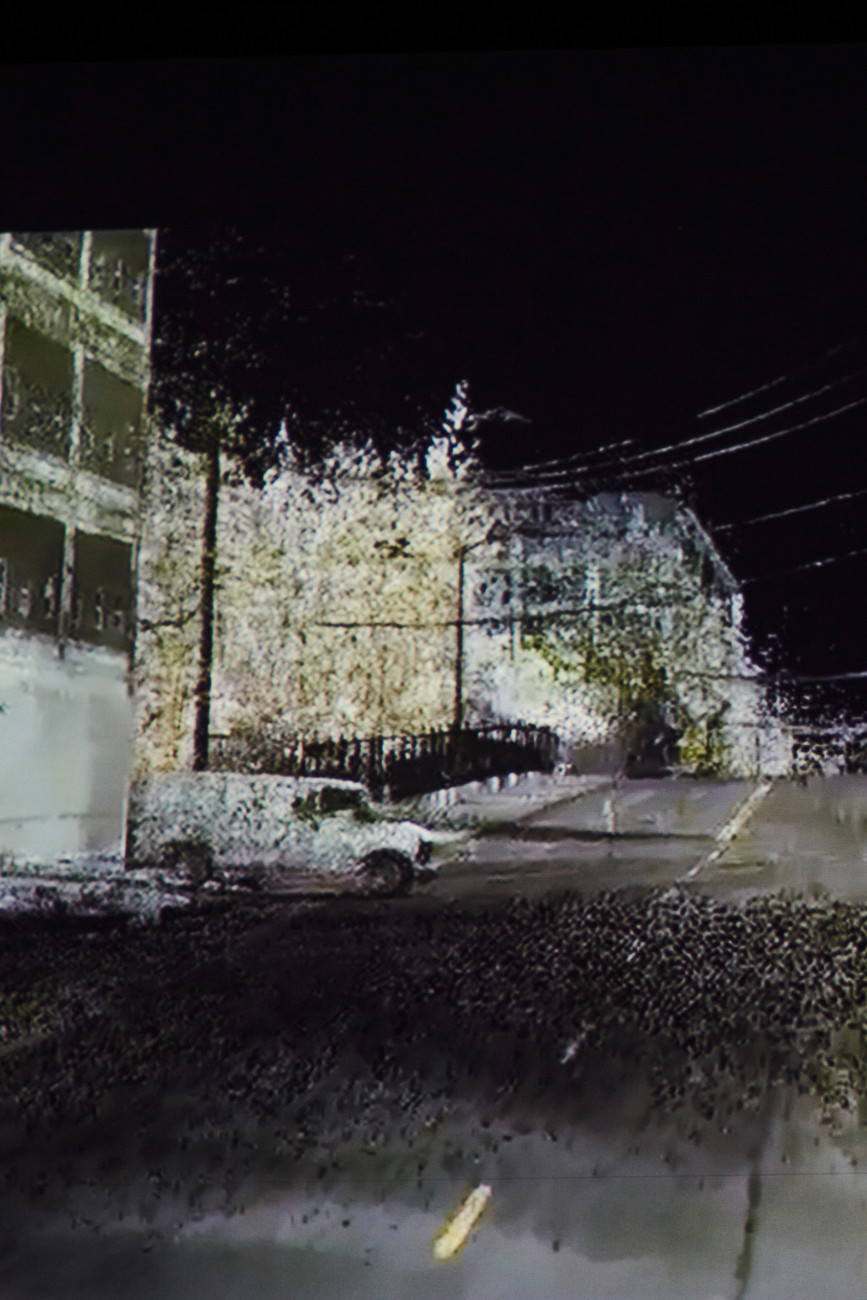