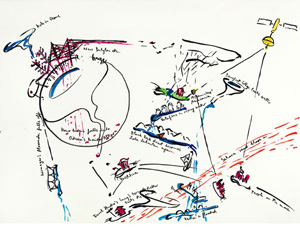 MP 17 Visionaries of the ´60s Confront the Upheavals of Today by Marjetica Potrč Courtesy the artist and Galerie Nordenhake, Berlin

This wall full of small sheets of paper in their white frames and colorful drawings is quite unique at this year's Venice Biennial. Whole families stand in front of them, reading, discussing. Children and their parents laugh about the astonishing inventions and possibilities, the challenges, pamphlets and instructions. Here we can sense the presence of a joyful future; a life beyond our homemade catastrophes such as water shortages or urban sprawl. The artist imagines a sustainable, and moreover viable world - and she is surprisingly familiar with the world today, with the favelas and slums, with solar heat and rainwater collection, with traffic loads and aquifers. It is not utopias she describes. Instead she documents real ideas, achievable plans, worthy stances.

What makes the work so unusual? Marjetica Potrč, born in 1953, explains the allegedly complicated in a clear and simple style. For Daniel Birnbaum, who presents her work as part of his "Fare Mondi" exhibition, what counts is the immense creativity, namely her ability to establish a new perspective: "The context she refers to," he says, "may appear rather apocalyptic. But her drawings also show that there are good reasons to be optimistic." She designs urban plans without planning approval and land registry offices. She shows that architecture and urbanism often flourish more effectively and produce results that are more habitable where regulations do not exist - in countries in transition, in the self-erected districts of informal cities. She gives an intimation of what places might exist if Kafkaesque regulations and truly exploitative capital interests ceased to apply and sour our lives for us. She goes way beyond the anti-civilizational thrust and mud-brick escapism of earlier eco-architecture. What she addresses is current, concrete: avoidable catastrophes such as the floods in the wake of Hurricane Katrina. Feasible projects such as removing concrete surfaces with the nature that preceded them and above all resuscitating the dreams of cities worth living in that have themselves become submerged under the detritus of modern city life.

Her work has a liberating effect because she is not sarcastic, monumental or hermetic. She does not bury her head in the sand. And ... Marjetica Potrč really knows how to tell a story. She narrates in a laid-back, epic flow with verve and power. She is ready (and able) to sketch complicated interrelationships that have existed for years as a series of anecdotes that somehow weave a Bayeux tapestry for the 21st century. And she also designs, installs and builds things herself.

Her father, Ivan Potrč, was one of the most important Slovenian novelists and dramatists, a co-founder of social realism. Her mother, Branca Jurca, is one of Europe's most productive authors of children's books. Marjetica Potrč marries the two: The lightness of a story which everyone can understand and the coldness and hardness of the underlying issues. Potrč studied Architecture and Sculpture in Ljubljana. However, she emigrated to the United States in 1990, before the declaration of independence and the Ten-Day War. She did not remain there for long. As four years later she returned and has since emerged as an influential figure in the European art scene. She is more a family person than a woman who loves the limelight. And it is crucial that we digress into her biography, as her Balkan background essential to understanding her work. Yet Potrč is a first-class world citizen: In Caracas, Venezuela, she developed a dry toilet for the La Vega slum (2003) and in Rajastan, India, she collaborated with "Barefoot College" on an on-site project.

In the past few years, three art galleries in Germany have honored her with premiere exhibitions. In 2007, she had a solo show at Galerie Berlin in Germany. In 2006, the relocated Frankfurt Portikus exhibited her Prishtina House, and in 2009, Kunsthalle Lingen (Ems) presented her colorful Tirana House, a type of house from Albania that does not adhere to any particular building rules. Meike Behm, Director of Kunsthalle Lingen, appreciates "the political but also accessible qualities" of Potrč's work and asked whether Marjetica sees her herself as a propagandist, replies, "No, she does not seek to agitate. Her work is based on observing real life, not on an ideology. It is not only her artistic work in the studio or gallery which is important but also her architectural work on location. Here in Lingen I have made it abundantly clear that for us the piece has a political dimension. And that was readily accepted by the public, sparking off many an exciting discussion."

One of the artist's strong suits, and it becomes clearer than ever in the show in Arsenale, is to picture history, to offer us a captivating narration. The subtlety of swift gestures on a sheet of paper, the joy of creating something from nothing, go beyond actual building and making. For here Potrč is completely free and wholly herself. And she is able to use this freedom and lend the small format a dignity, joy and visionary power that sweeps the viewer/reader along with it. Her ability to make important statements in an unpretentious way is only too rare in the often cynical art world. This easily accessible work radiates hope.

MP 17 Visionaries of the ´60s Confront the Upheavals of Today by Marjetica Potrč Courtesy the artist and Galerie Nordenhake, Berlin 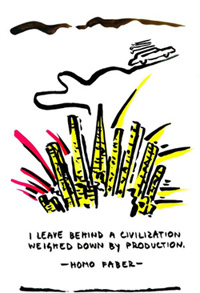 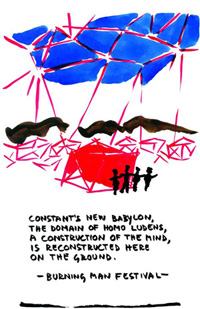 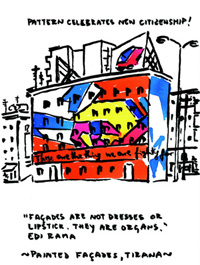