As Red As Blood

In South Tyrol, Pedevilla Architekten have designed a Fire Dept. building made of concrete dyed red – it looks entrancing, especially when surrounded by snow. Which is often the case here.
by Florian Heilmeyer | 2/20/2017

The beauty and silence of a snow-covered day has distracted many a person. For example, there was this queen who stared out of the window at the snow one moment too long and then - ouch - pricked her finger. As we all know, she was so enchanted by the beauty of her blood on the snow that she wished for a child with skin as white as snow and lips as red as blood. Her wish was fulfilled, Snow White was born and the queen, as one might expect from the Brothers Grimm, died shortly after giving birth.

Do you suppose the brothers Armin and Alexander Pedevilla, by trade architects, were inspired by the Grimm fairytale when designing the fire station in South Tyrol? At any rate the building manages to exude more of a fairytale charm than most other fire stations. Yet this is simply the new accommodation for the voluntary firefighters in Vierschach, a community in Hochpustertal near Bruneck, in an area located up to 2,000 meters above sea level, and subsequently often blanketed in snow.

It is above all the rose-tinted color of the irregularly dyed concrete walls that lends the house this dreamy, fairytale quality. The building is very raw, say the Pedevillas, meaning the prefabrication of the outer shell in highly insulating lightweight concrete was done so well that finishing work was kept to a minimum. “Irregularities in the concrete or pigmentation merely add to the charm of the material,” argue the architects. The outer surfaces were treated to make them more water-repellent, and then sanded down. Inside, the lightweight concrete was left unplastered so that the rooms behind the solid walls have a robust, workshop character about them.

Returning to the image of blood on snow, it would have to have been a fairly substantial and angular drop. The new fire station stands on steeply sloping ground between the village and the main road. Facing the street, it appears to have one story, while facing the village both floors are visible. Each of the two levels clearly faces ones direction: The glass front of the lower level containing the engine depot and changing rooms opens up to the village, while the upper level remains hidden behind a red concrete wall. Only the striking spiral staircase of red eloxy metal points clearly to the fact that there is also an upper floor. The latter also houses the seminar room, which the fire brigade also hires out for events or celebrations. Here the station opens up to the street via a glazed front and a ramp the width of the building, even though during the day the dark-tinted windows almost completely conceal the interior.

This upper room is the only one whose concrete walls have additional wood paneling – no, not of black ebony, like the window frames of the fairytale queen’s chamber, but local stone pine, while the curtains are made of local loden wool. Who knows, perhaps the fire station in Vierschach would otherwise have been too fairytale like? And we would not want somebody looking out of the seminar room to prick their finger! 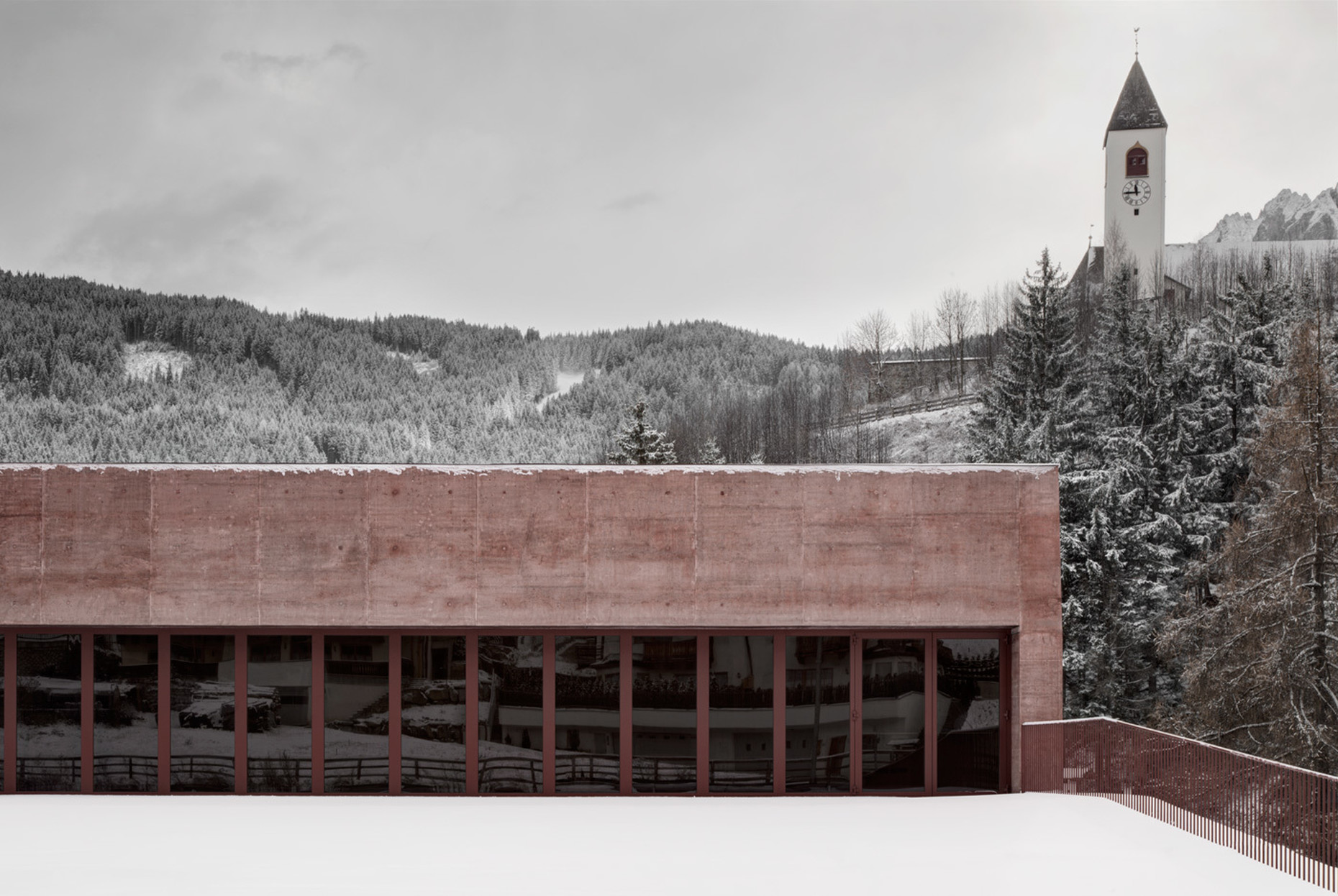 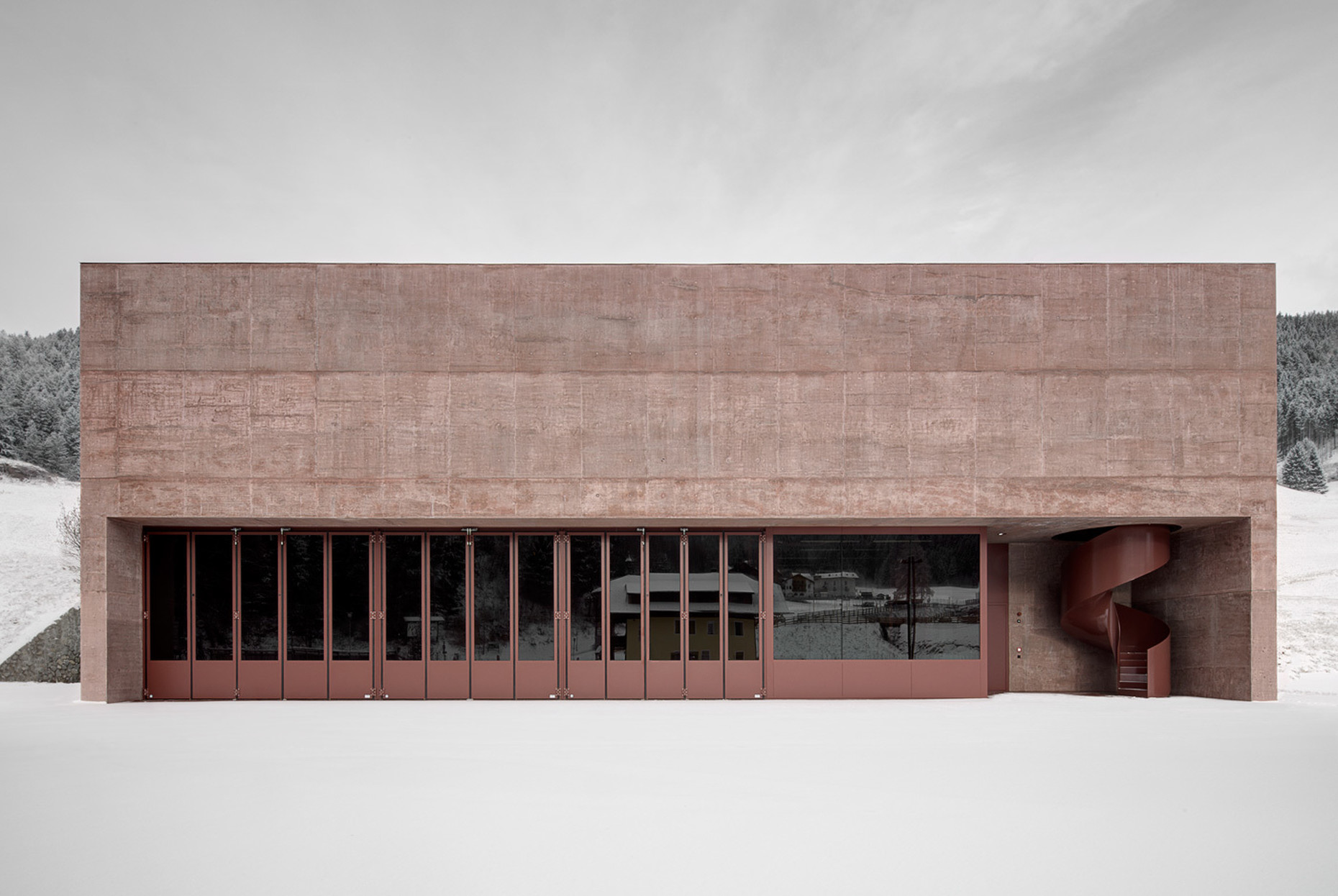 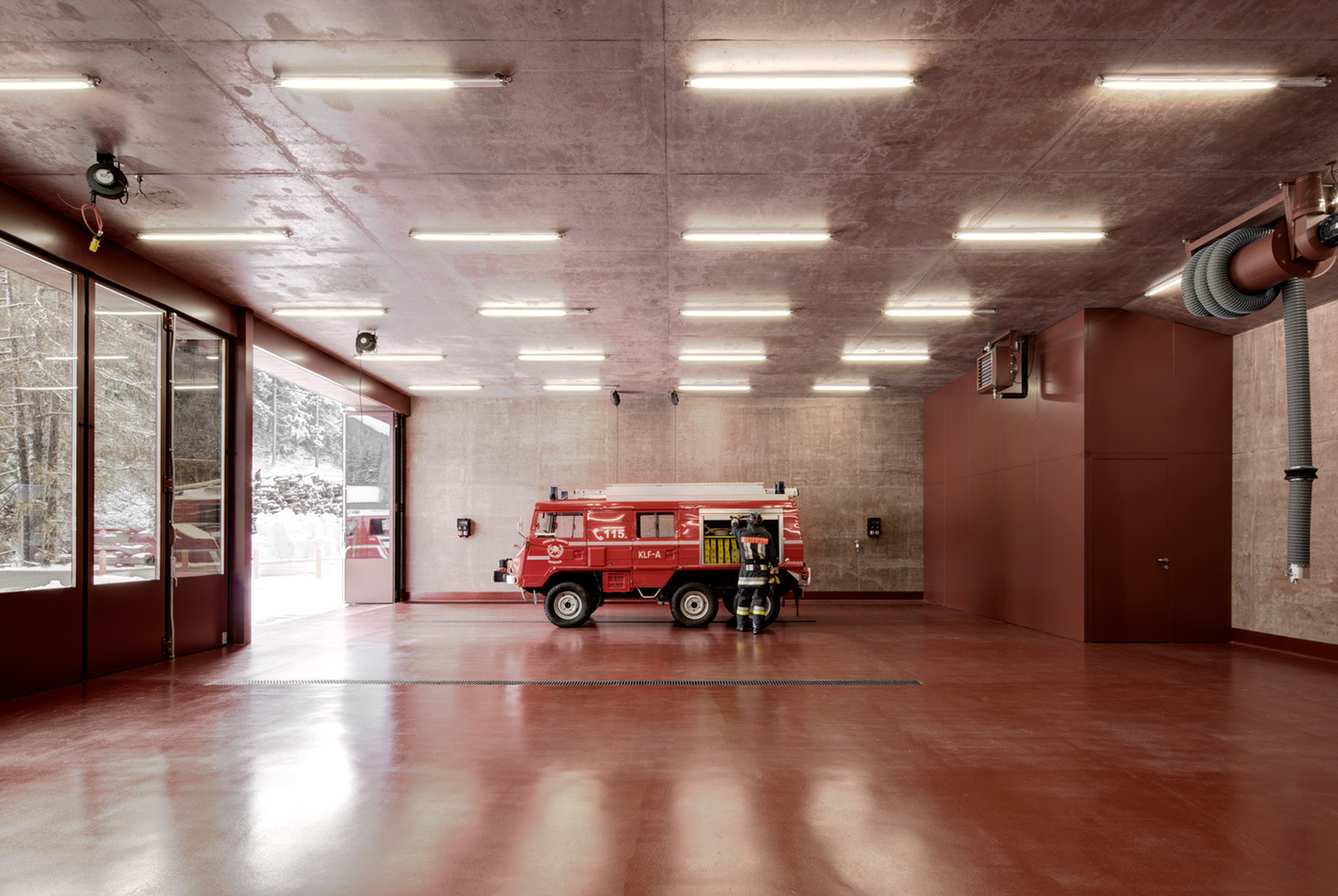 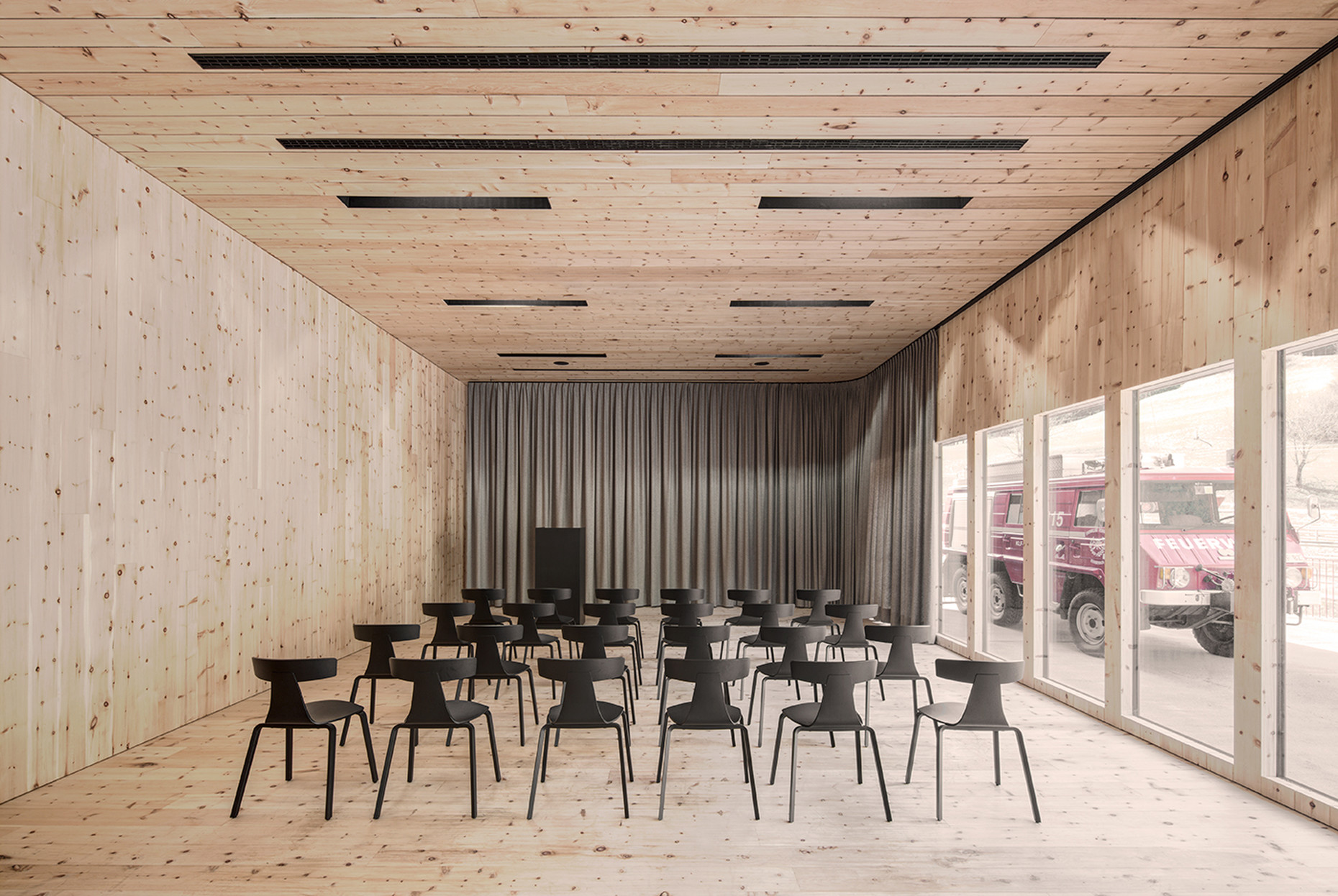 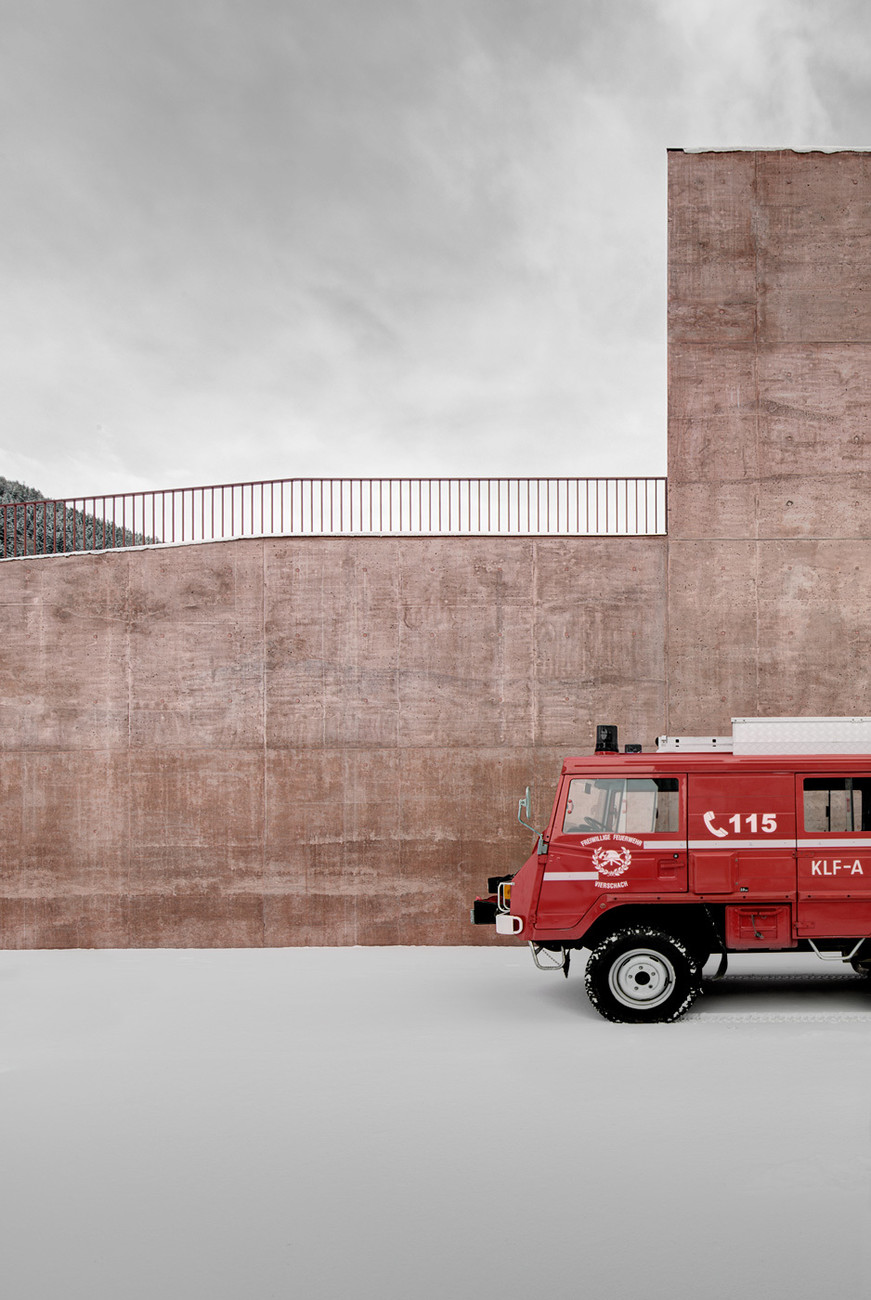 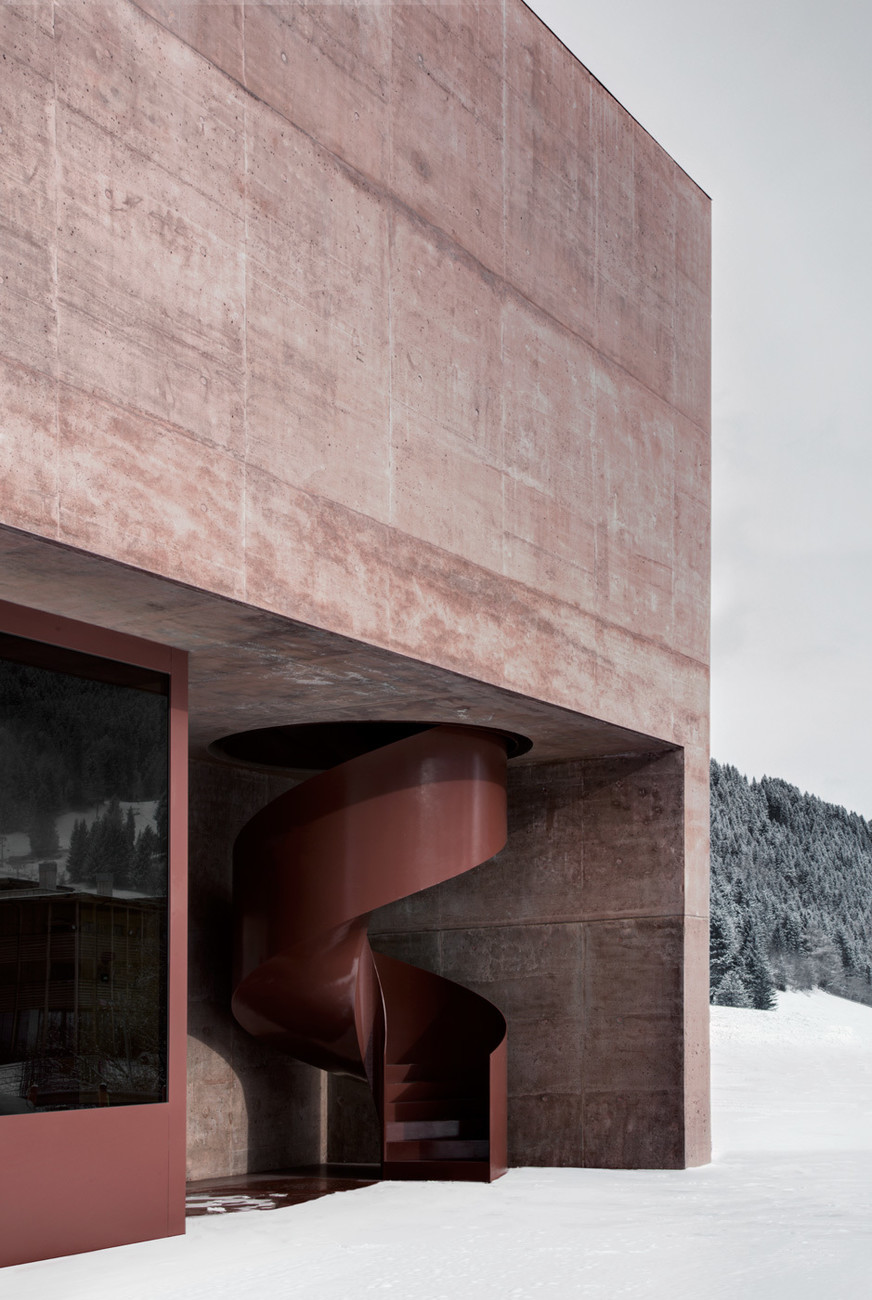 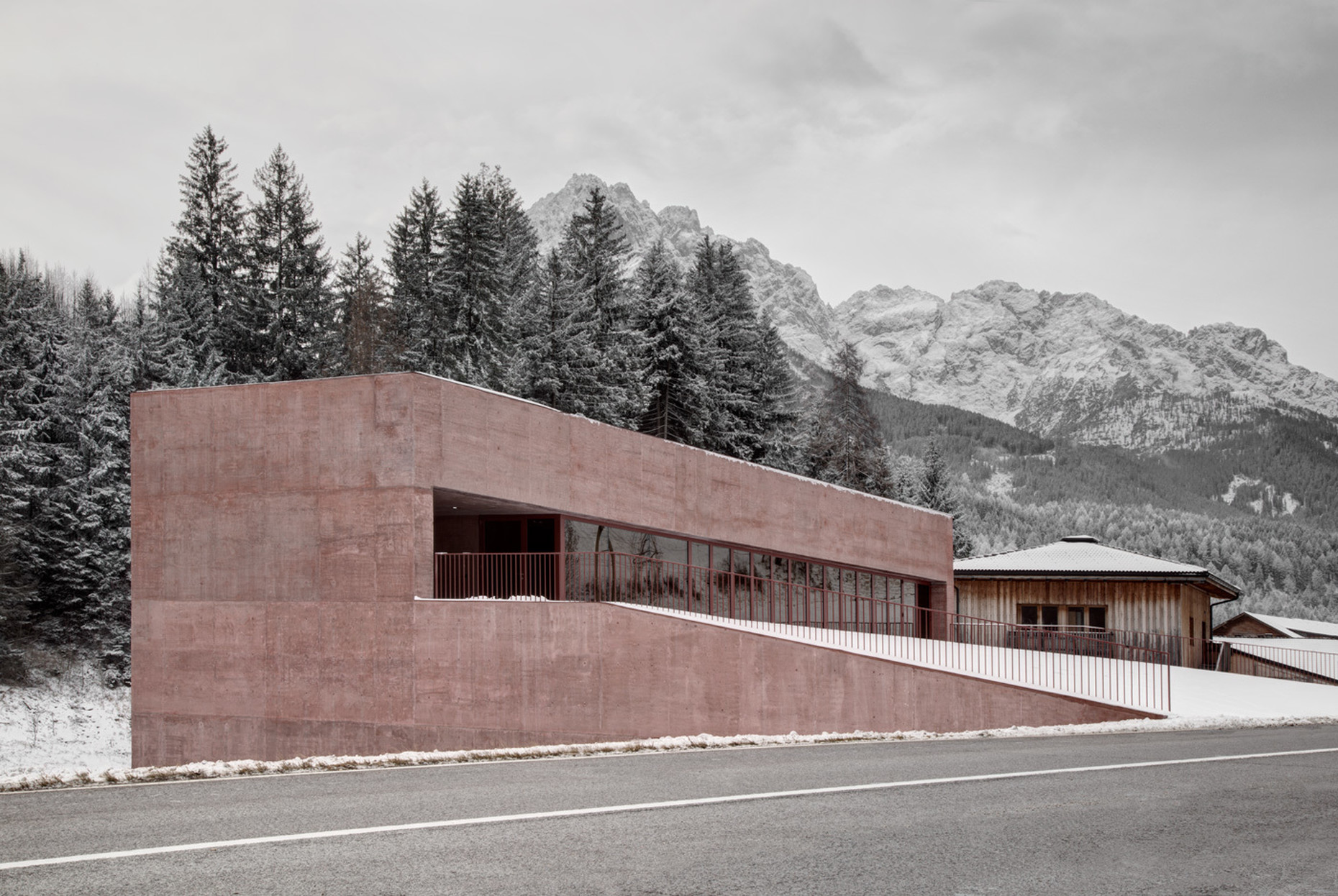