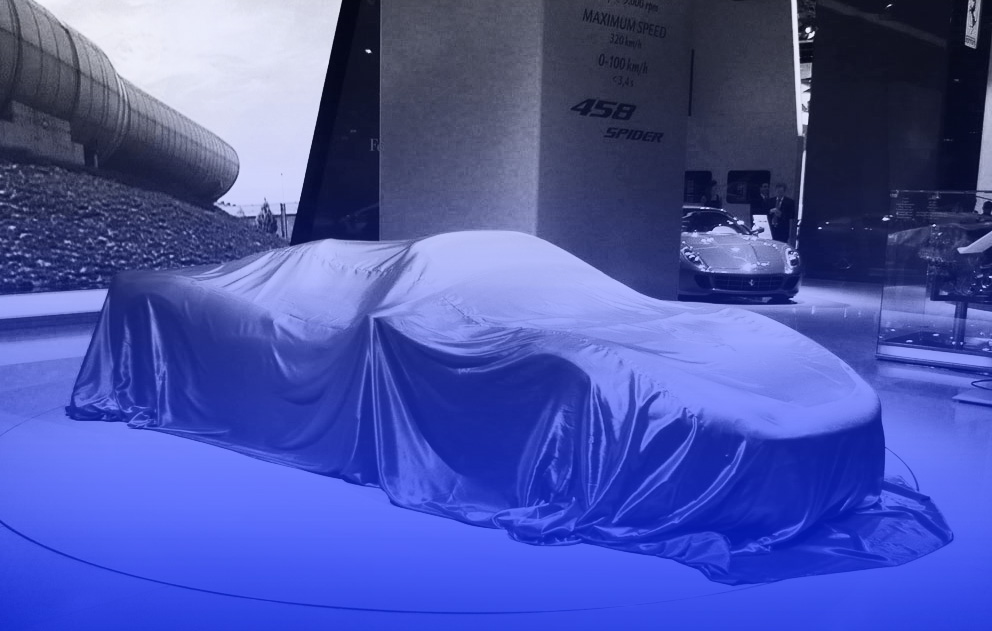 The car – an object full of secrets and stunning effects on our way to act? Photo © Thomas Wagner, Stylepark

The auto is quite simply an authoritarian being. It is constantly telling us what to do. To press the button, to move a shift, to heed the lights, to press the pedal. Never what people want. Always what the auto wants. Because it is forever expressing its needs, and we are conned by it, support it, perhaps even fill its tank. We have to read an instruction manual before we can drive off. Meaning we make use of the vehicle rather than it serving us, or only marginally so. It moves us, in a double sense. Car owners have to care for their car, love it, and statistics say that in particular men love to do so, to stroke and cherish their autos. So who’s the subject and who the object? Who’s at the wheel? In the vernacular, don’t we speak of the car having hit a tree or of two cars having crashed into each other? It’s not as though the drivers ever get mentioned. 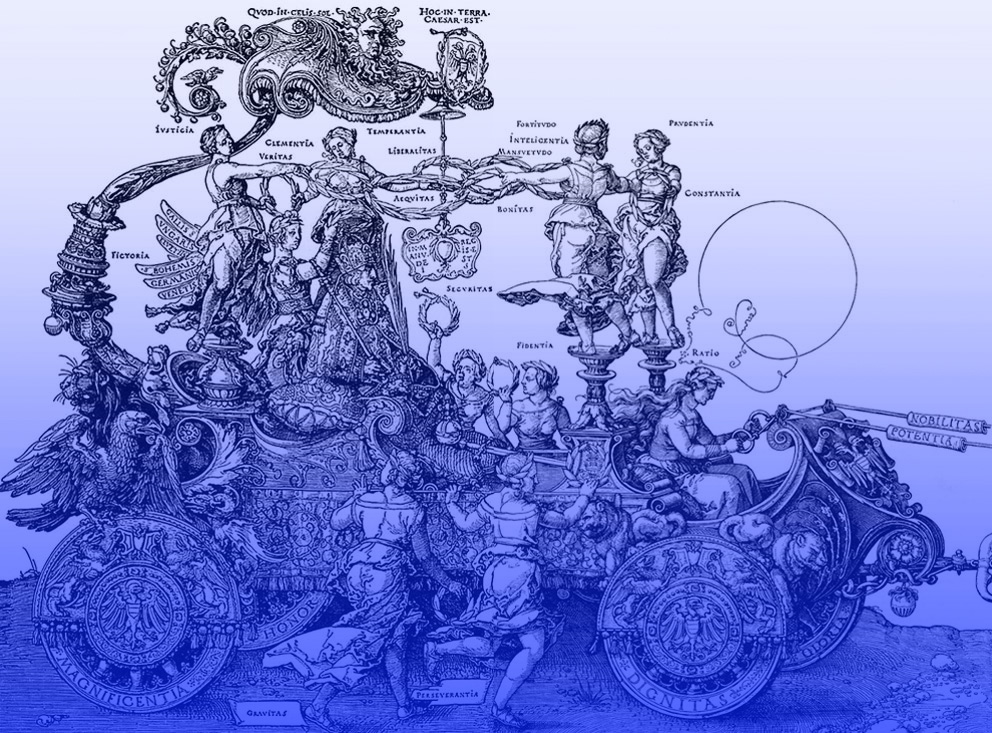 All for the image: Dürers „Triumph of Maximilian“. Photo © Zeno.org

Not that this is surprising given the very formulation of the automobile as something that moves itself. Which was not what the car was called from the outset. Back in 1886 Benz called his invention a motor car as opposed, later, to a motor vehicle and a heavy goods vehicle.
If one believes the corresponding entry (and the source seems very plausible for once) in Wikipedia, then the term “automobile” arose at the end of the 19th century as the “voiture automobile” to designate a streetcar driven by compressed air and it was not until 1909 that a Darmstadt lecturer on motor cars, one Freiherr Ludwig Löw von und zu Steinfurth, who defined the automobile as a vehicle that “1. Is moved by mechanical power (sic: i.e., it does not move itself), 2. Bears within it a source of energy for its change of location, 3. Uses customary roadways, and 4. Itself encloses the persons or goods to be transported, at least in part.” At the time, this definition also applied to motorbikes, for example, and therefore did not really highlight the automobile’s autonomous character. Incidentally, it bears remarking here that the word “automobile” is a strange concoction anyway; namely from the Greek term “autos”, as in ‘self’ and the Latin “mobilis”, movable. Two adjectives from two different languages artificially linked to form a strange noun.
All the more remarkable as for many people precisely the self (admittedly, very dubiously) has become a substantive characteristic of their existence, in the development of all those dreams of the subject, subjectivity. Individuality and identity. Of all things, this self then gets placed firmly in the car’s lap. 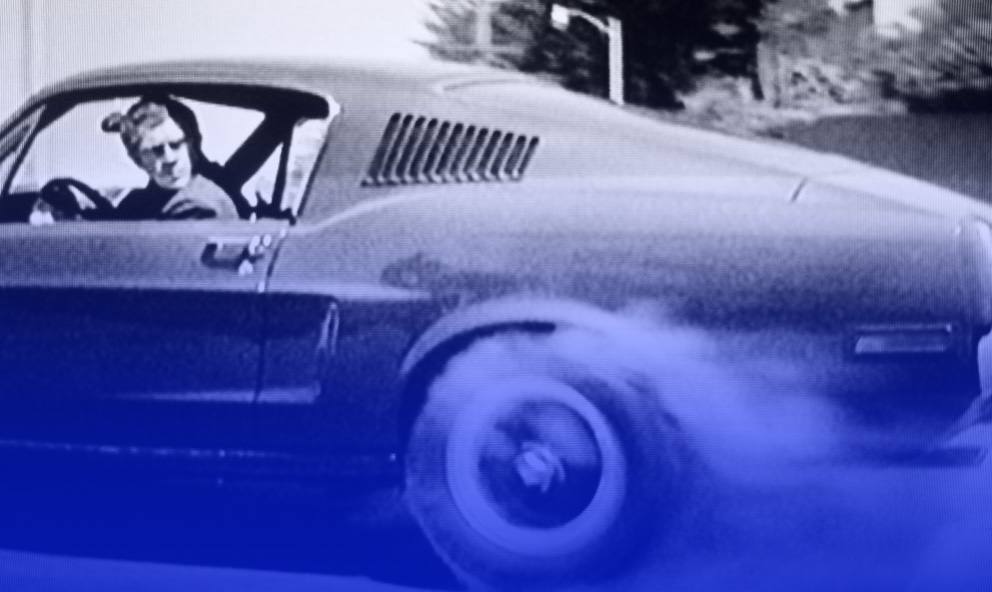 Wanna be a hero? So get a glimpse on Steve McQueen in his Ford Mustang 390 GT in the film „Bullitt“. Photo © flickr

The thing is, after all, fiction incarnate. Which is why it plays such a great role in films, bringing them to life, or driving through them in self-animated form. It burns through Manhattan, roars up mountains and down valleys, whizzes round hairpin bends, spins, rolls over a few times, bounces over all sorts of terrain, whirls across the desert. And yet we should know that such speeds and movements are not to be trusted, because here all manner of processes are helping to accelerate things, bridging gaps, slamming on brakes. But who doesn’t love those movies with car chases, those legendary love affairs including the corresponding acts or fisticuffs in them. Who doesn’t remember that scene in the James Dean movie “Rebel without a cause” and the tests of the driver’s courage, stopping just before the cliff, the famous “chicken run” that ends in death.
It would be worthwhile totting up the total, because it could well be that in recent decades both in TV series and in feature films, as much as 10 percent of the scenes take place in cars or with a view of them, meaning that the automobiles occupy the scenes. 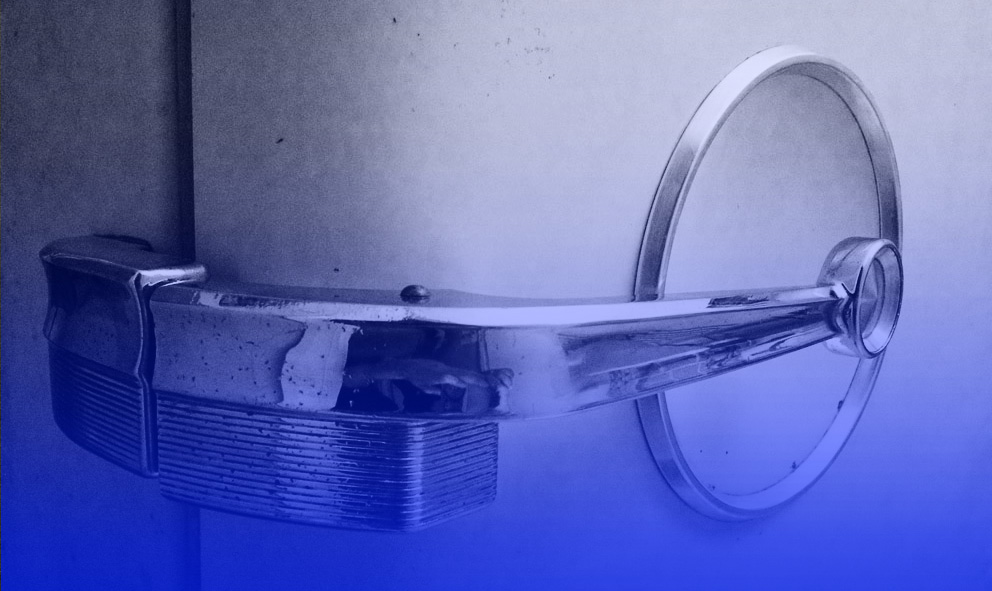 Specifically, the acoustics or sound is an important tool in these representations of automobiles. Because in our heads we invariably associate automobiles with certain sounds: They need to hum, roar, rev, or occasionally chug smoothly. And we all know that the sound for each automobile has been specifically designed. Including the sound of the engine, of the doors, the individual instructions it gives drivers and the swish of the tires on the street.
This has to do with marques and as early as the 1950s Franco-American designer Raymond Loewy realized when developing what was in its day a very famous refrigerator, the “Frigidaire”, how strongly sound could be used to make a brand or enable a brand transfer: He had sound checks conducted on Cadillac doors and transposed the acoustics onto the sound the door of his “Frigidaire” made when closing.
The most nonsensical sound design today is that for the indicators, as it simply imitates the acoustic of the old indicator relays although they no longer exist. Purely a matter of nostalgia. 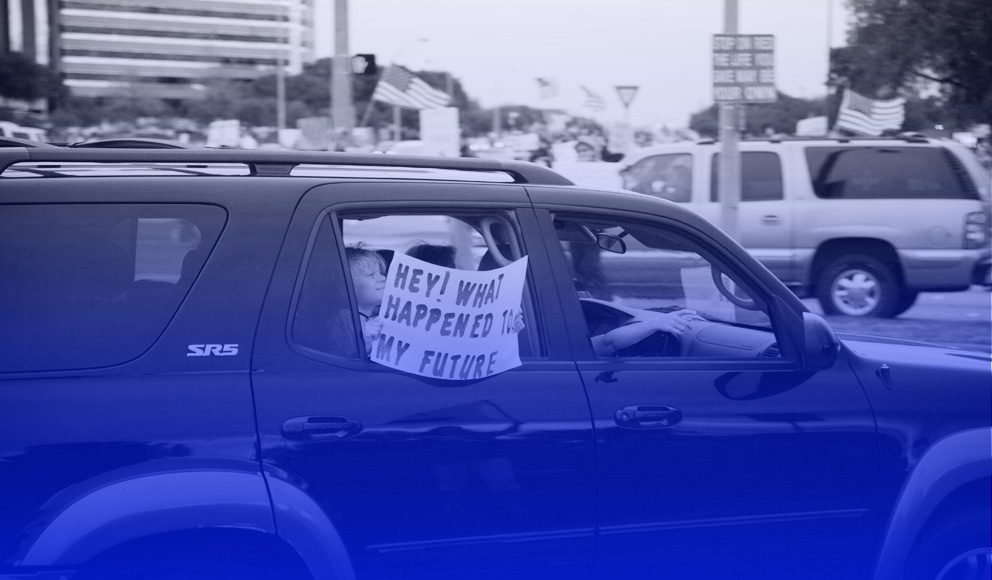 Autism and power: who has a big car, has got it all – and its private room everywhere. Photo © flickr/Susan E. Adams

Anyone sitting in the auto rarely cares much about those outside the small auto-cosmos. Why concern yourself with those bipeds or bicyclists. This is extremely obvious in China, where car drivers (or maybe even the cars themselves?) can simply do as they like: There, you don’t need to stop for pedestrians let alone apologize in any way for having by mistaken backed into someone. You’re in your private space, and as if in a spaceship you capsule your way through a strange cosmos, sealed off from the outside world. Small wonder that those people who almost exclusively drive cars or are chauffeured around in them quite manifestly suffer a loss of a sense of reality (no, they don’t actually suffer it, but seen from the outside it sure looks that way); meaning people like politicians or the inhabitants of the executive floors of companies and administrations.
Such a form of autism is coupled with imagined power, no doubt driven by memories of images from movies; and they escalate with the size of the auto, specifically if it’s an SUV, that promise of outback adventure in the big city. As far as male SUV drivers are concerned, among some of them the “dernier cri” is spray-on mud to visually document the adventure they have not actually experienced. But evidently women likewise love these strange tank-like vehicles. In particular “Lamas”, i.e., Latte Macchiato Mamas, who so like to transport their kids and all the attendant trappings in such mini-trucks and in this way so masterfully rule over their kids. 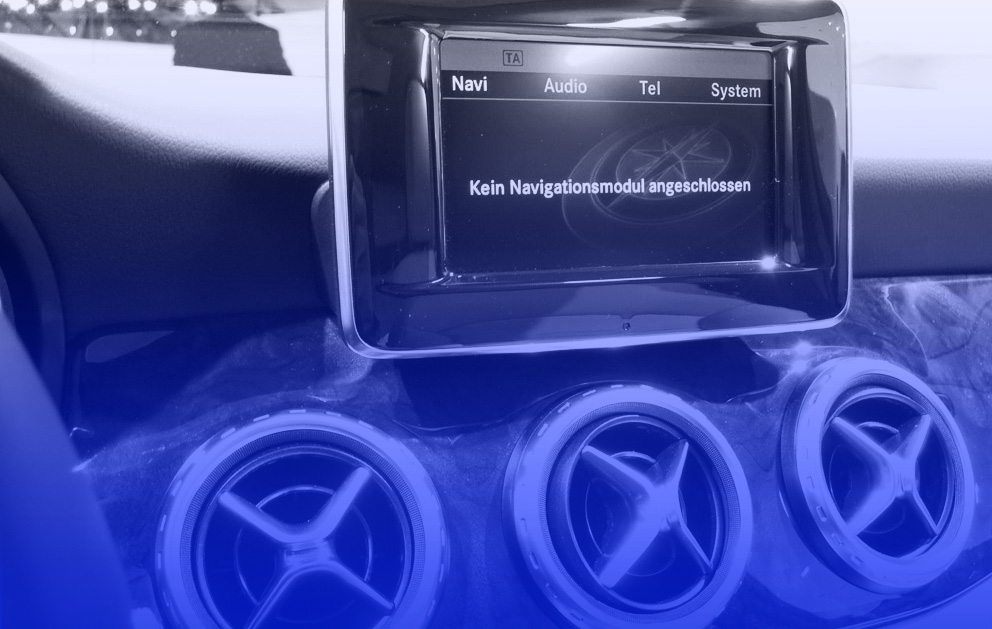 Hopefully not all ways guide to Rome: If the navigation system is on, any kind of self-conduction is oblivious. Photo © Thomas Wagner

The omnipotent navigation system sits well with the automobile and its authoritarian demeanor. One is constantly oriented and informed, given good form. Any responsibility for your own route is eliminated on the spot. Instead. A strict, and usually female voice explains (clearly, this is meant to soften or accentuate the gesture of authority) how and where and for how long you need to drive. And does so, so magnificently that everyone obediently follows.
Infamous that moment when, a few years ago, shortly after the end of the Frankfurt Book Fair, the GPS signals failed for a few minutes round the city: Almost half the autos on the ramps to the interstate came to an immediate halt. – No, of course the autos didn’t stop, but rather the drivers did. Because the drivers had not found out ahead of time what route would take them to their desired destinations. This anecdote should at least prompt us to forbid such people to drive alone and rather that we should appreciate their infantile but faithful obedience of technical instructions and should therefore further boost the autos’ authority over people. Sure, such people were probably once monitored by a baby-phone, consoled by a Mama button and before they even went to school trusted they could be located by their Smartphones. Solitude or getting lost are things they’ve never known. They need the autos’ authority. 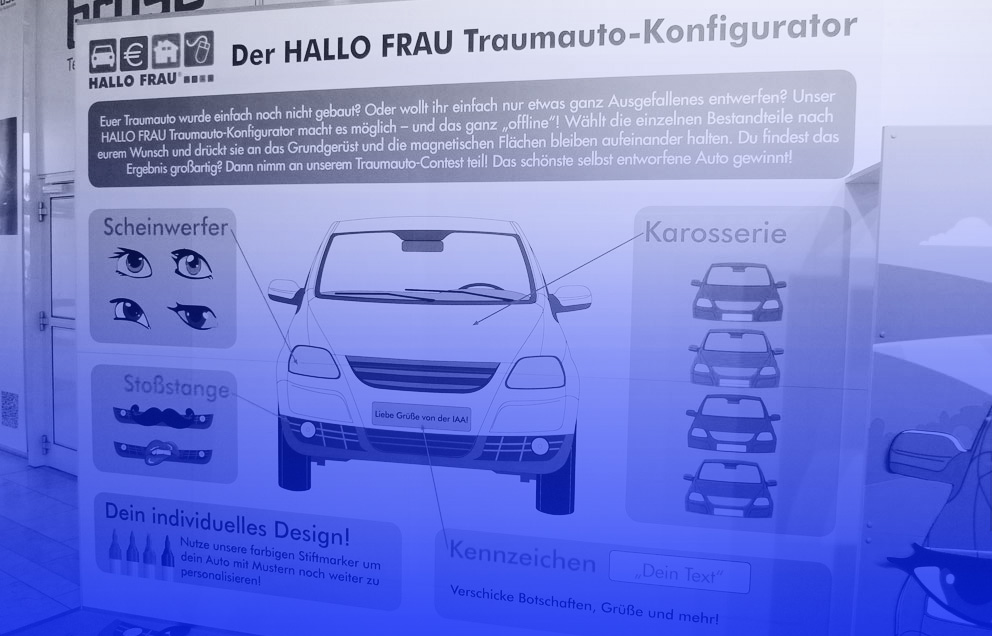 Autos have long since not been authored by engineers but by designers – to be accurate by male designers, as in the corporations it is basically only male beings who are responsible for the outer and technological design of the marques, while the females are in charge of the interiors and above all the textiles – or to put a gloss on it, for the color & trim.
Seen superficially, design’s relevance for auto development is by no means new, as some, above all Italian marques stand for innovations at least in appearances: names such as Pininfarina or Giugiaro (he designed the VW Golf, among other things). That said, the power of designs has increased appreciably in recent decades, since the point when designs for individual sections of each auto were digitalized and the digital data could be sent as files straight to the production line. There was a time when designers drew things, built models or had them built, possibly they even built prototypes. But it was the engineers who implemented things, leaving many a designer stunned by what happened to their work in the course of such transfers. That has all changed, although engineers are of course still important in car-making.
In the design context, what is striking is just how complex these activities are. After all, everything in and on this vehicle has to be designed: every button, every lever, the complete dashboard, the seats, the many mirrors, the windows, the floors, the engine itself, and all the other technical parts (nowadays, an auto has to be spectacular under the hood, and in particular in needs an eye-catching exhaust), then there are the hub caps, the logo and many other things besides. Not least there are the various color tables, headlight and taillights, the acoustics of all the parts, and even the way the interior smells. Add to this all the communications media, the advertising, publications, marketing and PR materials, the special trade fair presentations, the many showrooms and stores, etc. It’s quite staggering.
How odd and seemingly how contradictory the fact that all auto corporations suggest to their buyers that the latter will become owners of their very own, completely personal auto, specially customized to their personal tastes. Indeed, one auto rolling off a major carmaker’s lines rarely resembles another: The autos get produced to order. Such that the buyer is given the feeling s/he has been creative. Of course, this is a fiction to a certain extent, surprise, surprise; as you can only choose from within a diverse array of actually standardized design-defined items. It’s like a supermarket, a pseudo-democracy that pretends you are choosing things yourself, although you are simply conforming to what is on offer.
However, and this much we must concede, in this context the quality of the design includes striking the right balance between fictitious choice and rigorous marque / vehicle type norms. For one fact otherwise gets ignored: understanding the real needs when using the car and substantively reflecting them in the design. None of the auto marques evidently grasps that after the buyer has used the car for a year they should check up and analyze what actually has to be done in order to be able to really use the vehicle in terms of the person’s particular requirements. And the carmakers and designers would be astonished to see what happens to cars, in them, on them, with them, to make certain they function complexly and are aligned to the respective person’s living conditions. 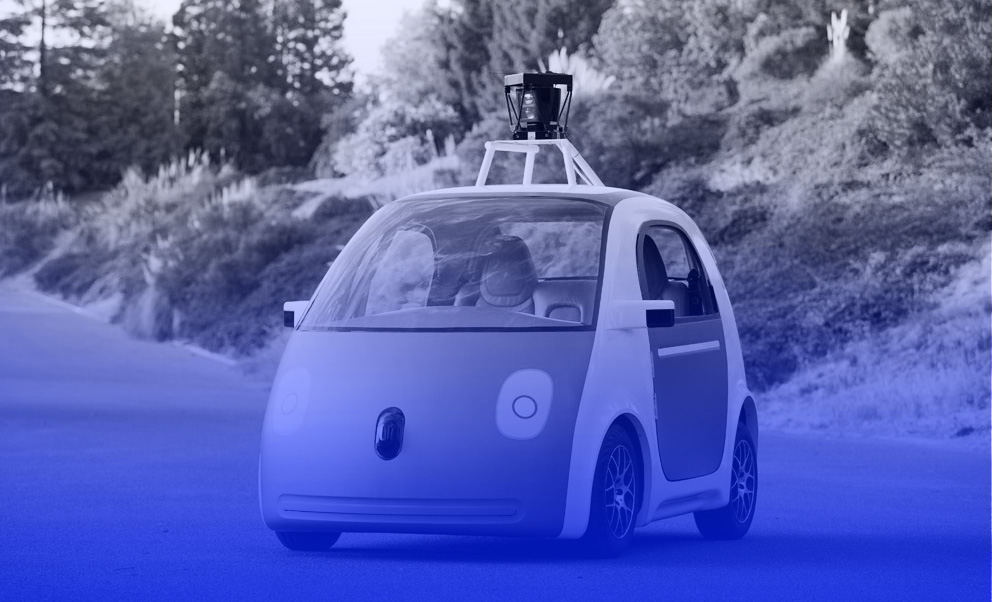 In future, will cars go on travel alone? With the „Google Car“ the dream of the automatical driving will be realized. Photo © Google
Advertisement