The new media campus OMA has designed for the Axel Springer Publishing Group sees itself as the concrete manifestation of a hypothesis about the end of classic office structures. The fact that in the digital age we urgently need enough space for communications and the exchange of opinions is something that the current pandemic has no doubt brought home to us once again.
by Jeanette Kunsmann | 2/12/2021

It just doesn’t stack up. On the one hand, the best working environment is at a computer where people are able to concentrate. At the same time, communications, interaction and agility are purportedly the working world’s new mantras. Which is why, with the architecture competition for a planned construction project back in 2013, Axel Springer SE posed the question of how best to reconcile these mutually contradictory requirements. Alongside its symbolic value, which was significant in itself, the architecture brief for this giant freestanding building at a central location in Berlin demanded something unique and seminal. And as Friedrich von Borries, president of the jury for the relevant competition, put it in March 2014, Rem Koolhaas’ project looked to find a solution "to one of the greatest dilemmas of modern office life, namely that working at a computer largely calls for a quiet and secluded atmosphere." Before construction work started, the star architect emphasized that: "It is our aim to demonstrate how, in these circumstances, it is possible to create a work environment which encourages both concentration and lively collaboration."

In October 2016, construction work started on a 10,000 m² expanse of parkland directly on what used to be the no man’s land between Schützenstrasse and Zimmerstrasse in the Kreuzberg district of Berlin, right next to the golden Axel Springer high-rise. The fact that the one-time border thus ran straight through the building is a consideration that the design by Rem Koolhaas, OMA partner Chris van Duijn, project manager Katrin Betschinger, and the planning team at OMA have taken into account, going so far as to reference the division in its details, for instance in a two-tone color concept. Eleven stories housing 3,500 workstations make a statement on Lindenstrasse, deploying their effect as a highly visible cube. With an atrium towering up to 42 m, the new building opens out into its surroundings, that with its greened roof terrace (which will hopefully also be open to the public in the post-pandemic era) offering Berlin a new location with a fantastic view out over the city – including the bar "Rem", named after its mastermind, architect Rem Koolhaas. The deal: The expanse of parkland will be released for development once the roof terrace has become public space.

In the inside of this giant block a kind of canyon opens up, its topography determined by bridges, terraces and little office landscapes reminiscent of cell structures between the pillars. Because at this point the network that is the glass façade creases into little triangles to form a display window, the above-mentioned open area receives an ideal influx of daylight and, as Mathias Döpfner pointed out at the opening ceremony in October 2020, it is difficult for people to tell whether they are indoors or outdoors. With its staff restaurant, the entrance area on the ground floor acts as a mixed zone, thus forming a flowing transition into the open co-working space. The offices, editorial section and learning lab are spread out over a total of 52,000 m², with approx. 75 percent made up of fixed office structures and 25 percent consisting of informal work areas.

"If you look at today’s office situations, you usually encounter people behind computers at long tables, people who scarcely communicate with one another, who wear headsets and are isolated, as if they were in a bubble. The radical thing about this building is that it challenges that way of working," is Koolhaas’ verdict on the concept. The purpose of the open atrium area is to make every part of the building visible from all the other parts. "In this way the building is transformed into a kind of communications machine that breaks down the isolation that is still currently one aspect of digitization." Office structures in the analog world become networked and as they do, so do the people inside them. After all, visual links not only engender a sense of being part of something bigger in individuals, they also give rise to chance opportunities for collaboration.

However, what guise should Berlin’s new avant-garde media assume if, in in our digital culture, we no longer feel a connection with any particular region? The collective office landscape on the Springer Campus is composed of different items of modular furniture, some of which are multifunctional. These stand in small groups between the programmatic architectures which constitutes the building machinery. Most of the interior is based on purpose-built elements made to designs by Koolhaas and OMA purpose-produced by Italian manufacturer UniFor and Dutch design furniture label Lensvelt.

Soft rounded pink foam sofas are entwined around round tables and pillars, with some of the seats opening outwards invitingly and some of them facing inwards and shielding their occupants from the rattle of the machinery. Together with OMA, Lensvelt has developed and produced a total of 12 different types of sofa, from a one-man seating island all the way down to meter-long benches for the new Springer building. On top of all this there are also the abstract modules in the "Family Blocks" line presented by OMA and Lensvelt at the 2019 Milan furniture fair, along with a host of different design furniture. Wiel Arets’ multifunctional "Stealth Cabinet" is a good room divider, both the "AVL" office and visitors’ chairs by Atelier Van Lieshout and the black Maarten van Severen chairs lend the finishing touch to co-working and lounge areas. As project manager Gwenda Gieseler explains, "The aim was to produce flexible and playful furnishings". As many of the sofas are on castors, they are easy to move around, thus allowing for new arrangements over and over again – and practically no limits are set to how employees want to lay out their workplaces. That said, it really is the case that so far nobody has been able to predict how people will be working at the new Springer Campus after the pandemic is over. At the moment, things have gone rather quiet, after all, working at home is the order of the day for the majority of staff members. 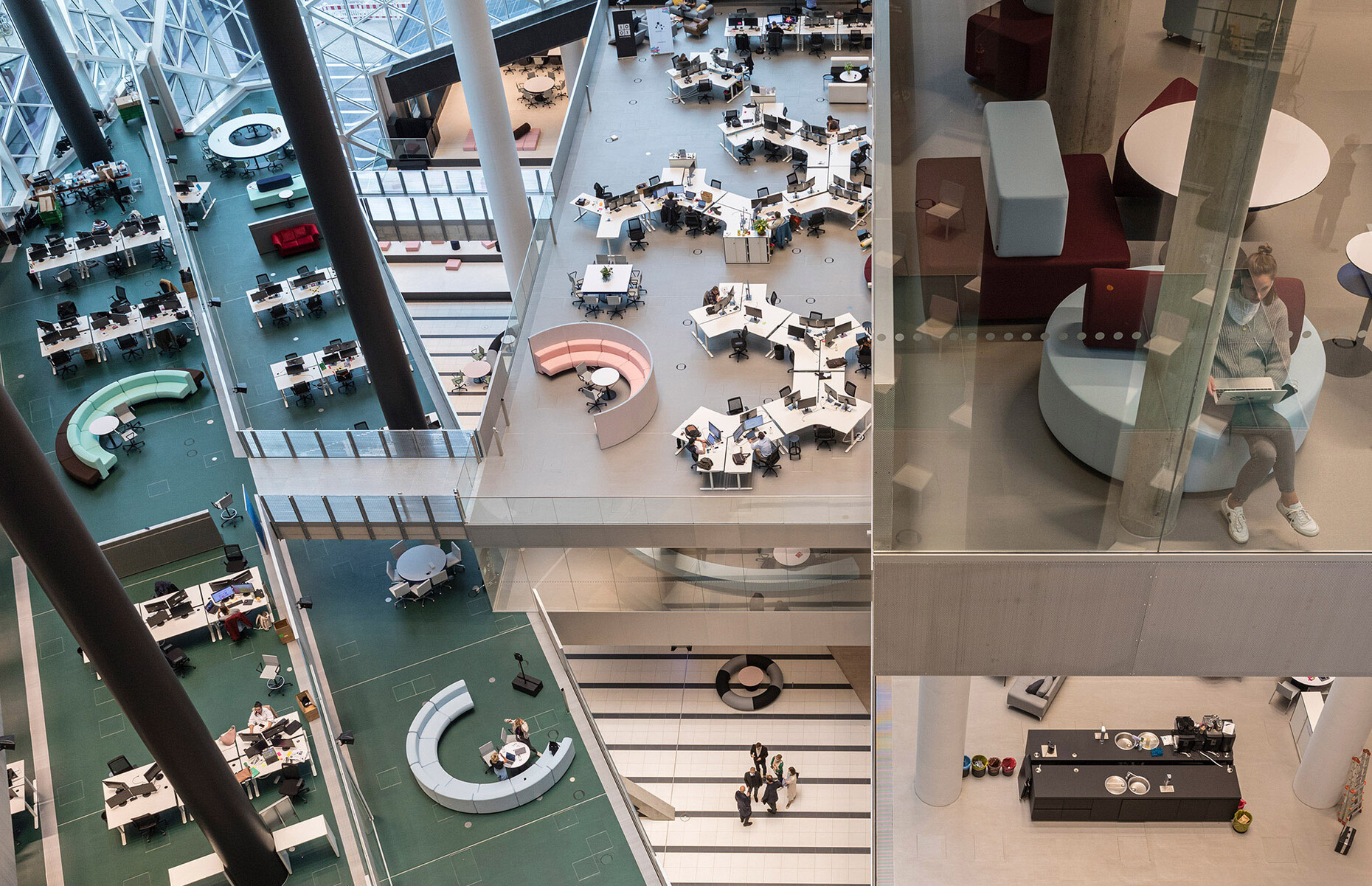 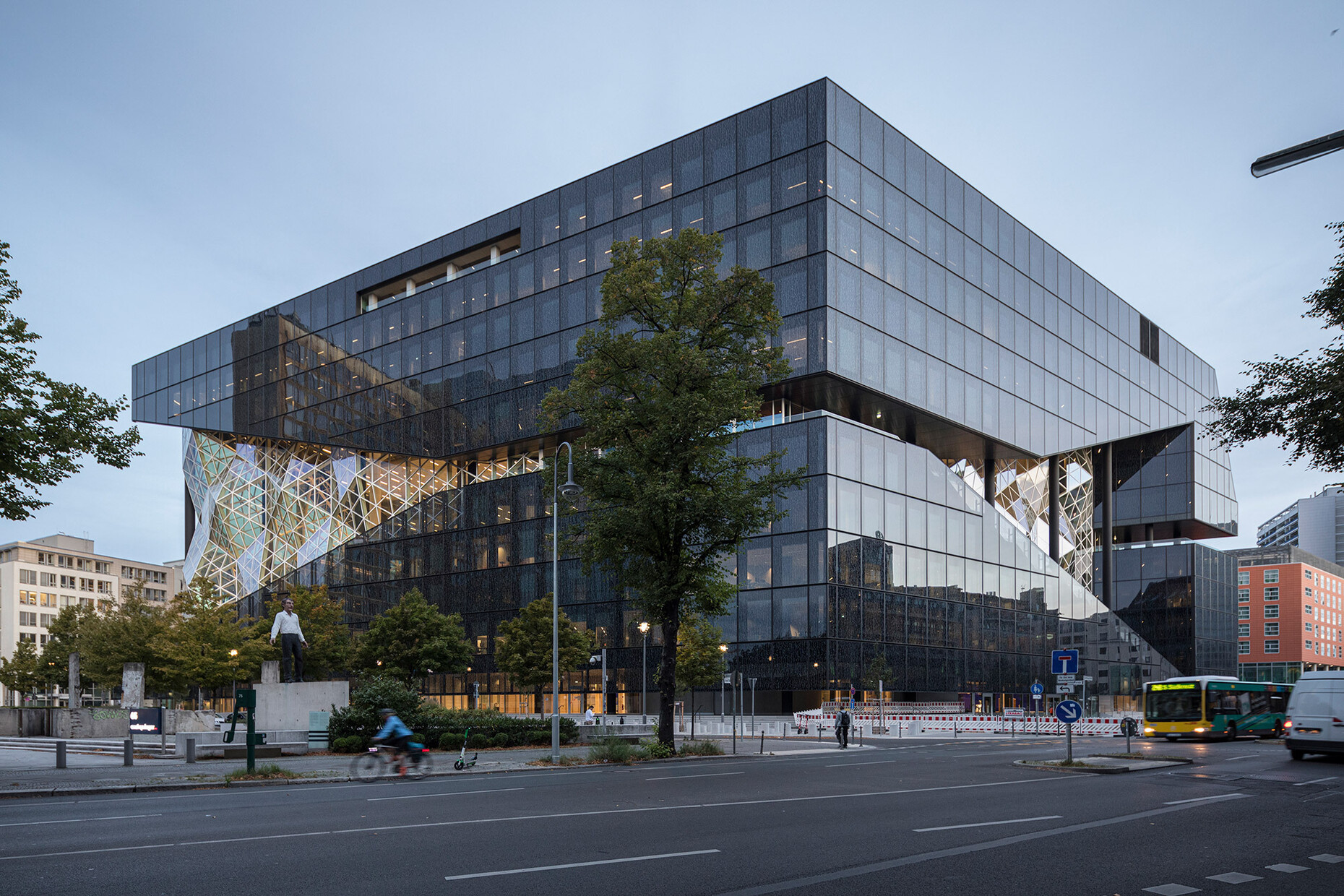 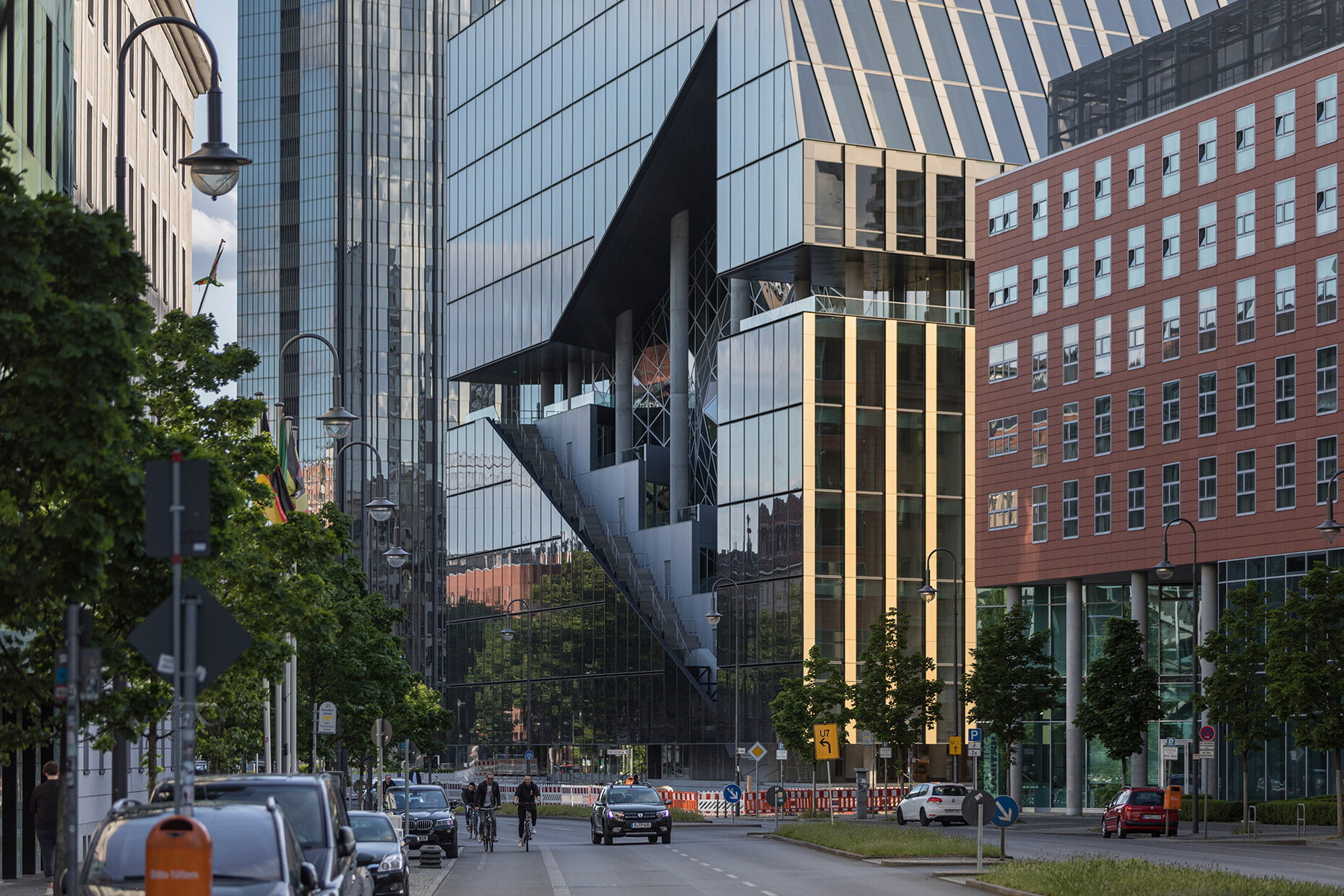 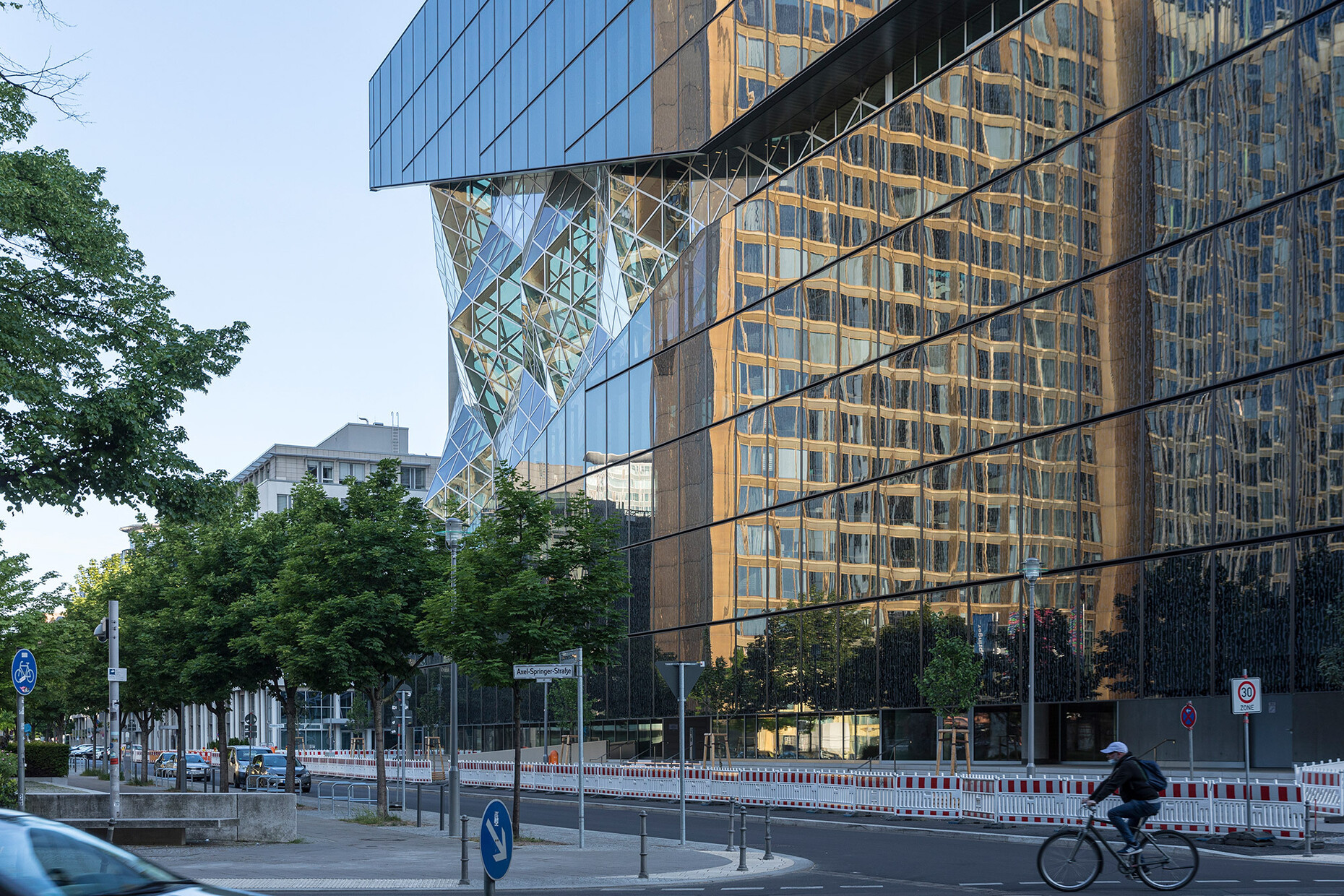 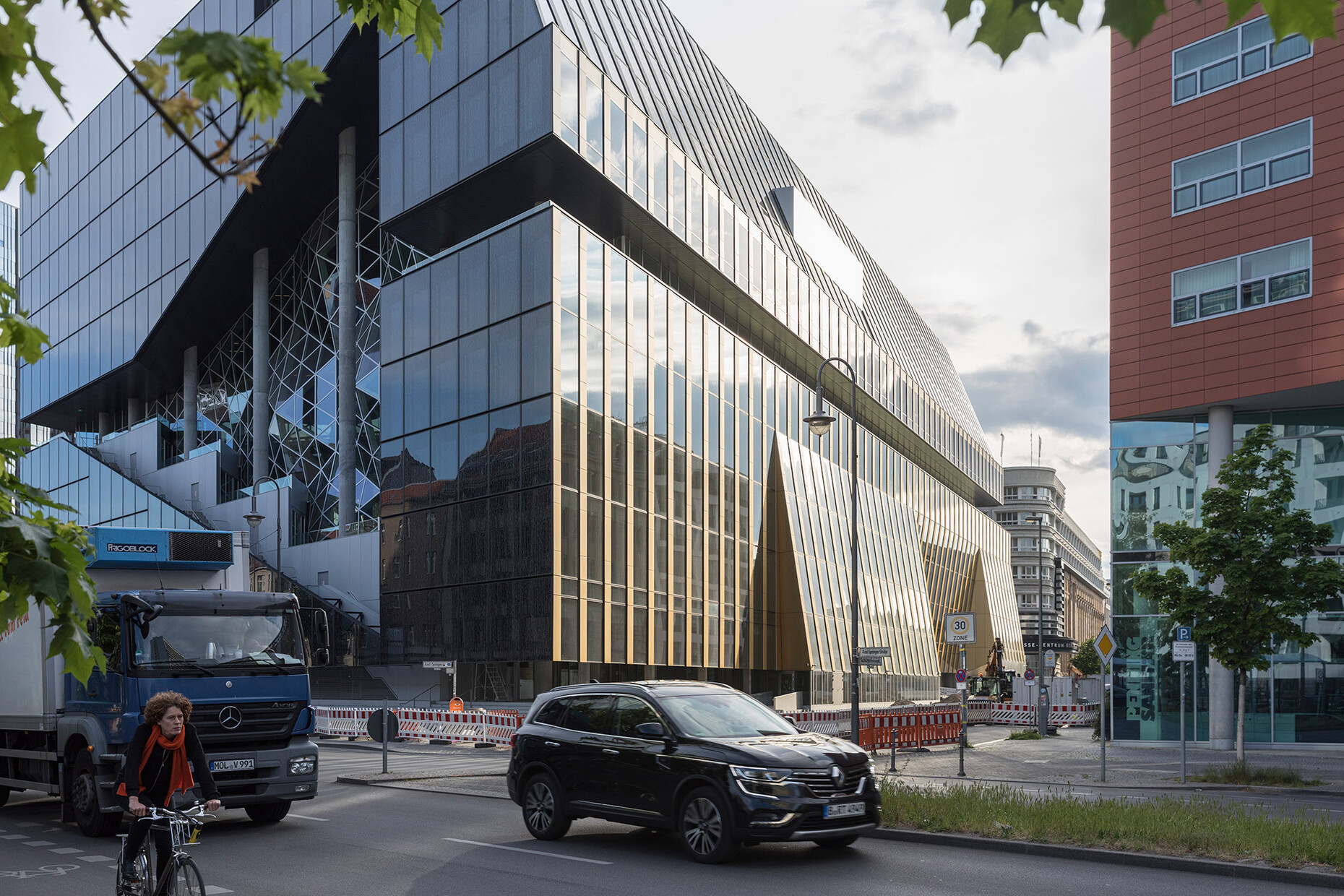 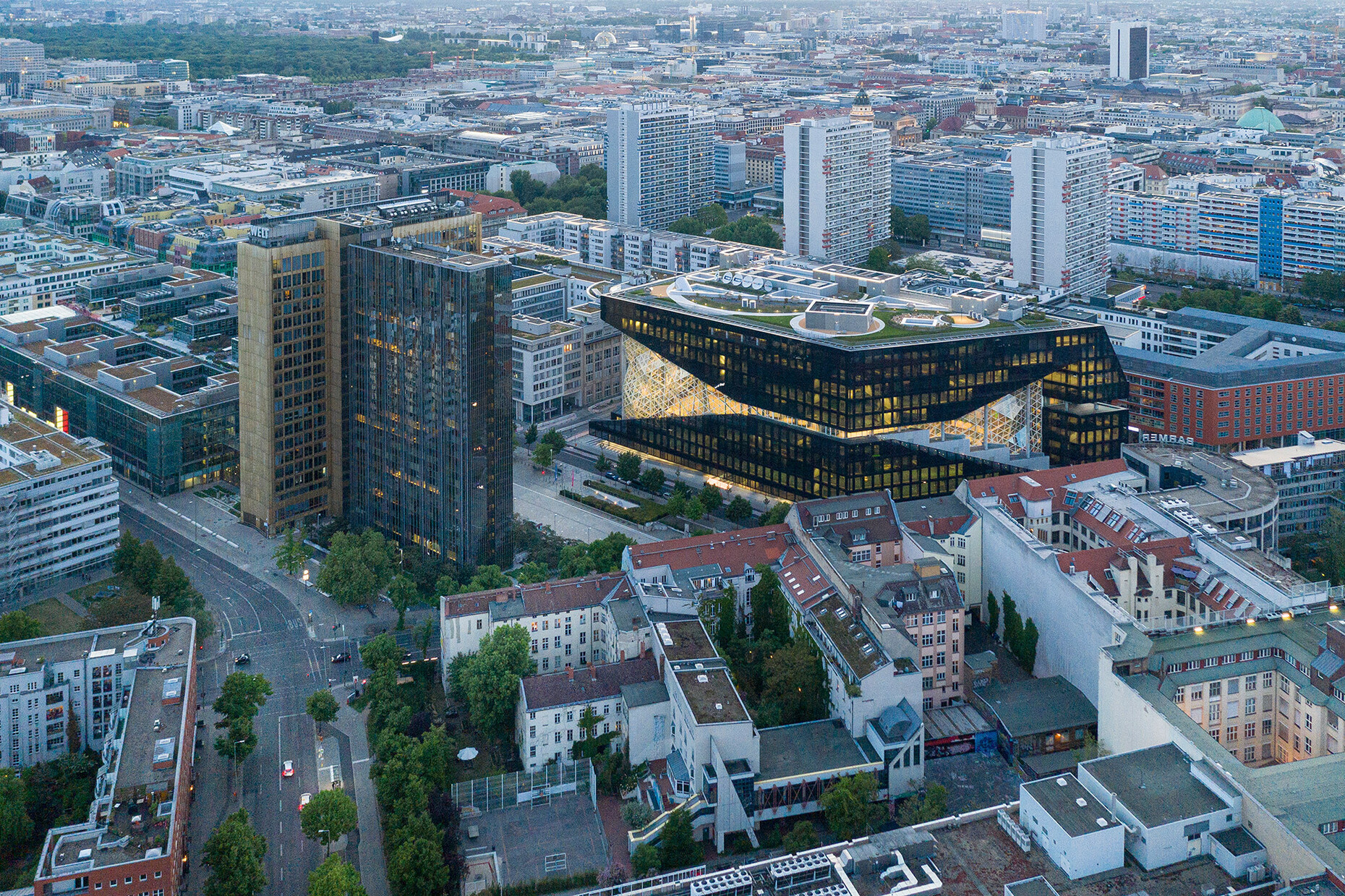 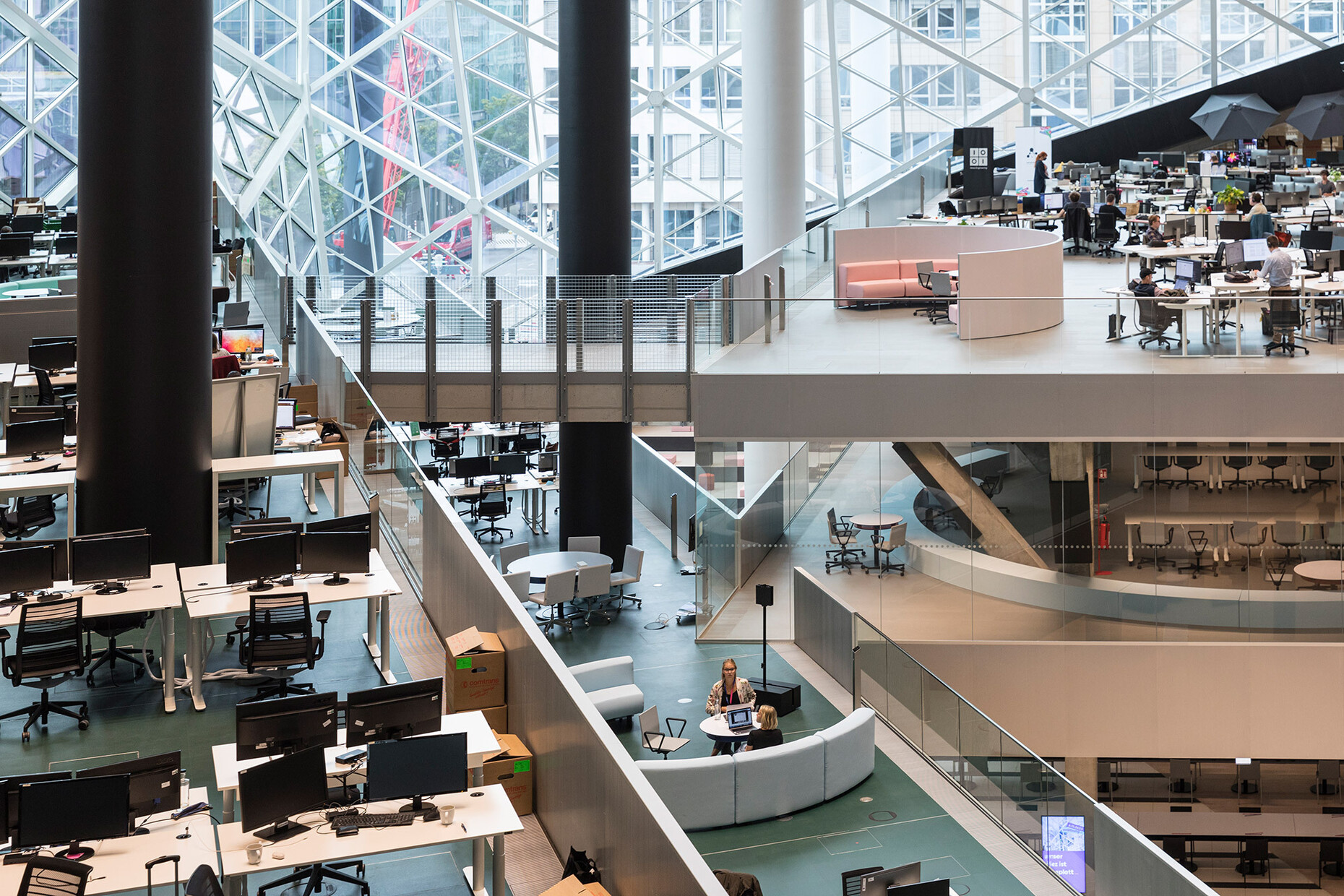 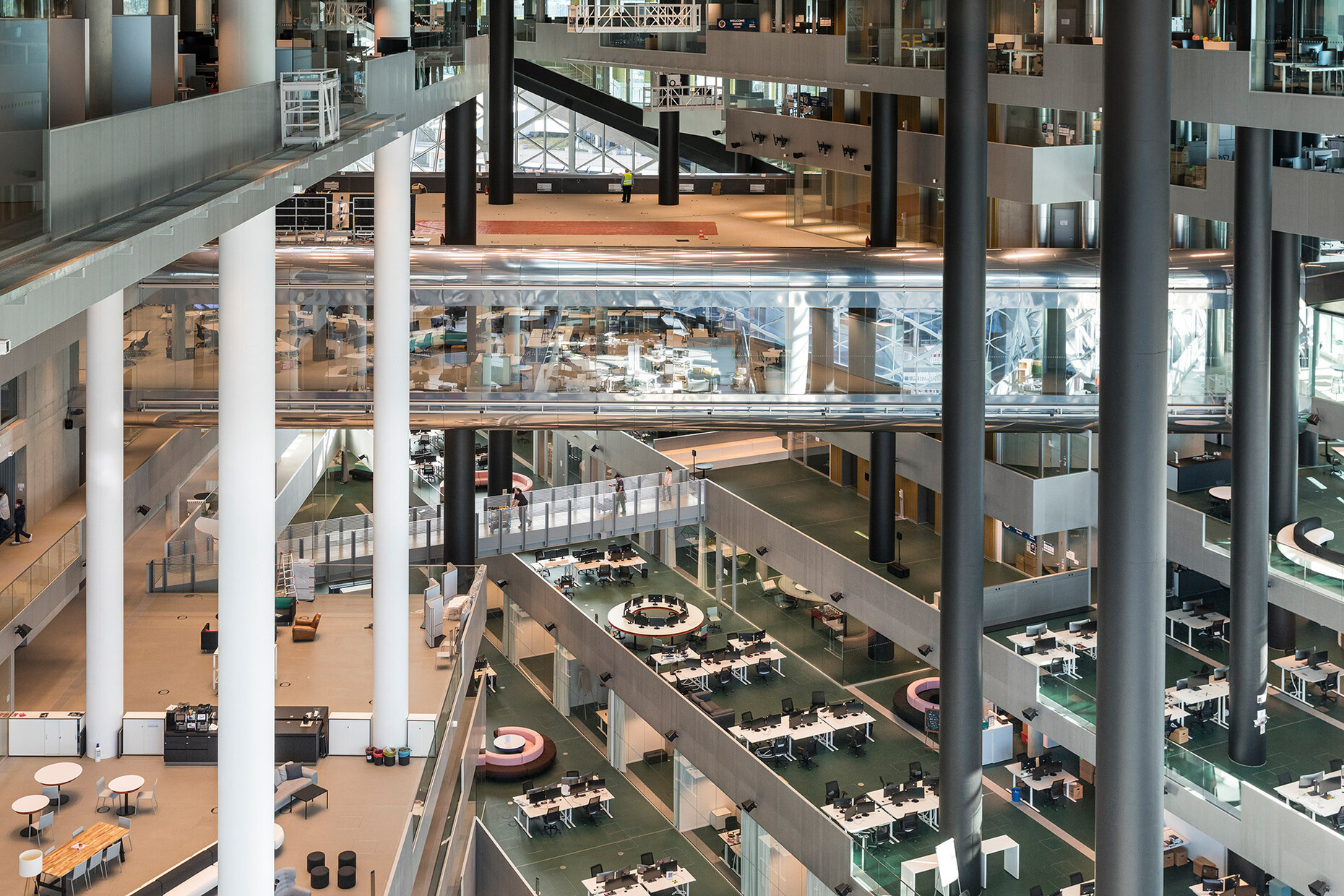 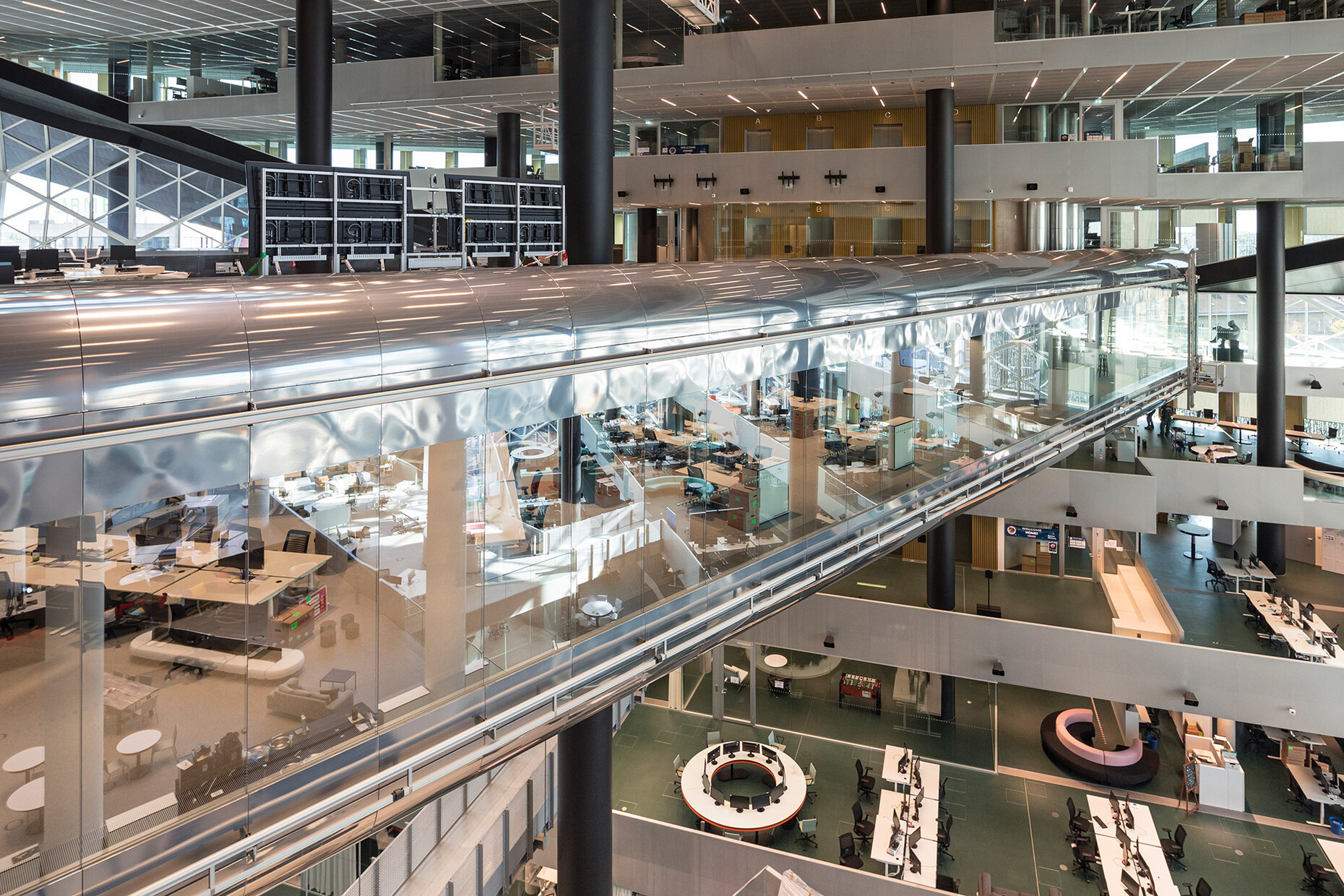 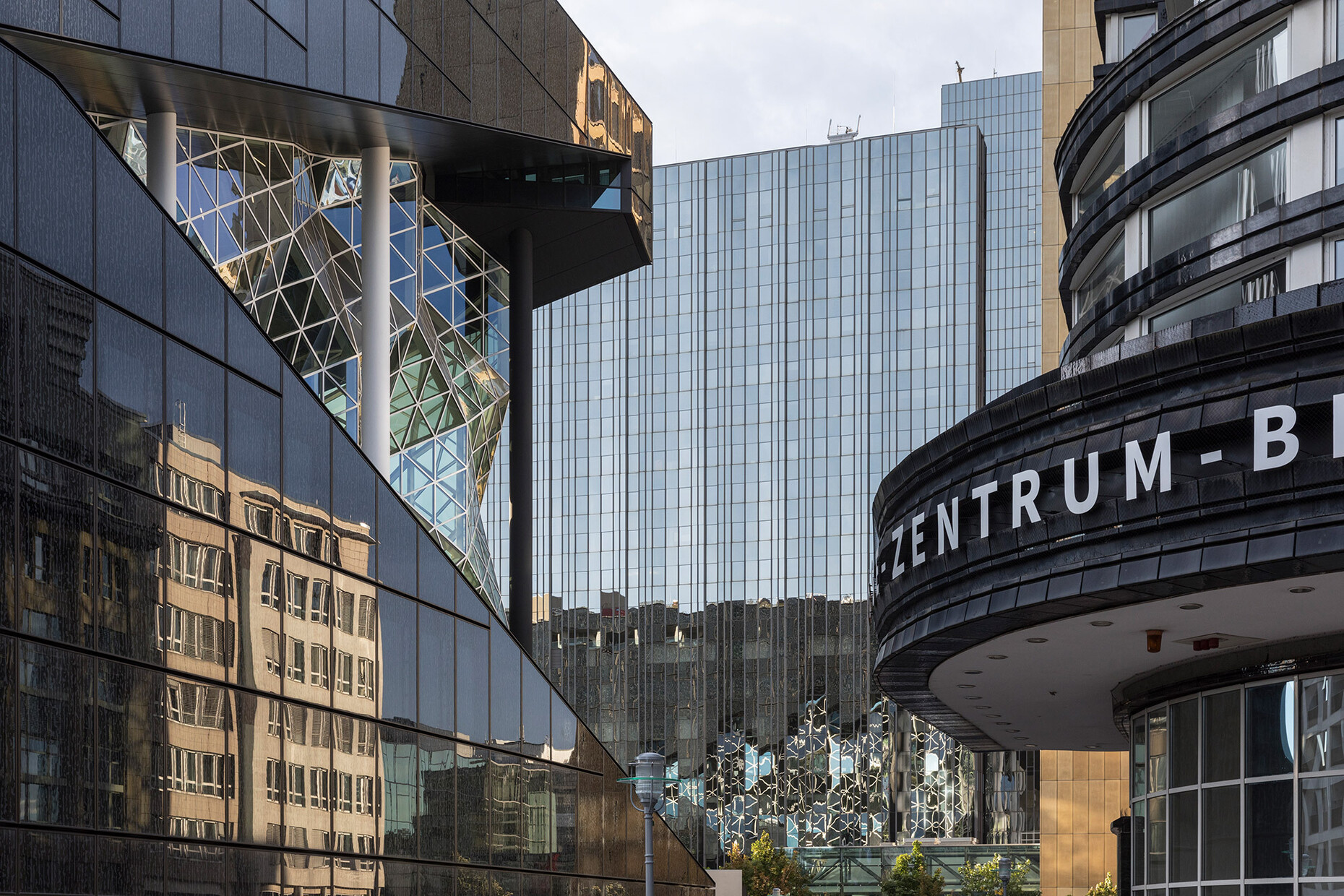 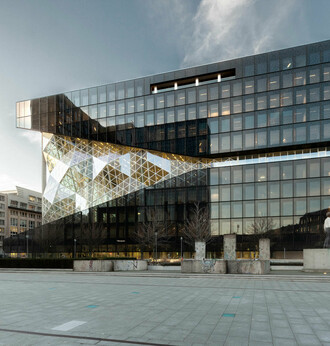 With his new Axel-Springer building Rem Koolhaas has created a landmark in Berlin that thanks to its radically modern architecture stands for the move towards a new way of working. The comprehensive supply and drainage system in the heart of the building is courtesy of Geberit. 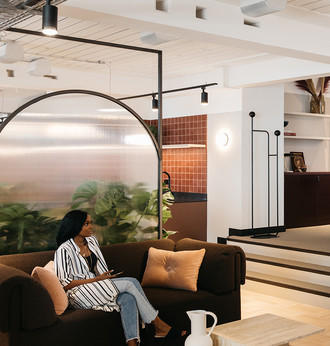 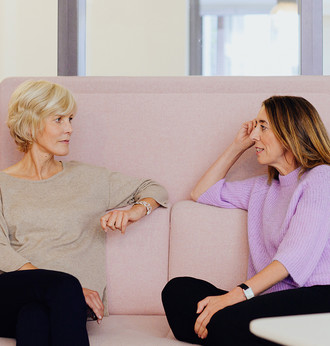 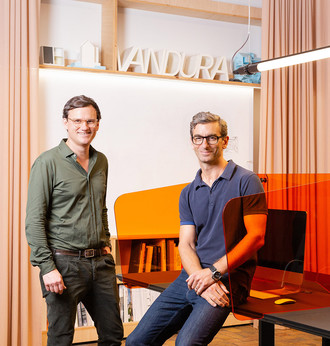 What kind of spaces and premises do employees need to ensure a company is fit for the future? Stylepark put the question to Karim El-Ishmawi and Chris Middleton, founders of architecture firm Kinzo.
Advertisement