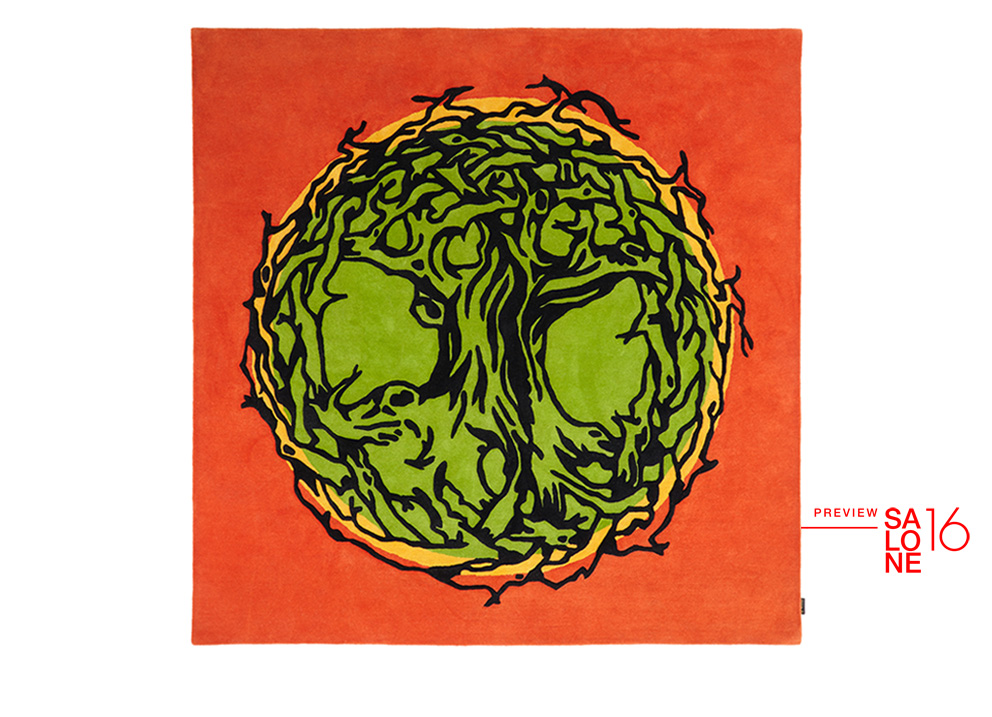 From Matali Crasset we have “Le Cycle”, a highly colorful square-shaped rug sized 250 by 250 centimeters and boasting an expressive subject: at its center there is a tree trunk encircled by branches emerges from a sapling. It is, according to Crasset, meant to symbolize the cycle of life.

By contrast, Sam Baron was evidently inspired in “Higher and Higher” by M.C. Escher’s endless staircase, illusion and three-dimensional perception of a two-dimensional surface measuring 218 by 203 centimeters. A definite eye-catcher, albeit unsettling.

You can say the same about “Thanks a Bunch” by Studio Job, a round rug with a diameter of 220 centimeters, which we are surprised to learn was inspired by a feeling of guilt. Nynke Tynagel, who together with Job Smeets makes up Studio Job, explains how it came about: Not very long ago, she had left a service station with a lovely yellow banana, but forgotten to pay for it. Only after she had eaten the banana and thrown the peel out of the window did she realize her criminal neglect. And she still felt guilty about it, which was why the rug was dedicated to the nice man at the service station. Will her attempt to make things good succeed?

In “Snip” Ineke Hans alludes to the archetypal geometric pattern of Persian carpets, resorting to the simple method by which you fold a sheet of paper, cut out shapes, and open it up to reveal a symmetrical pattern. By contrast, in “Pluto” (200 by 300 centimeters) Wieki Somers presents a suggestive image of a solar eclipse.