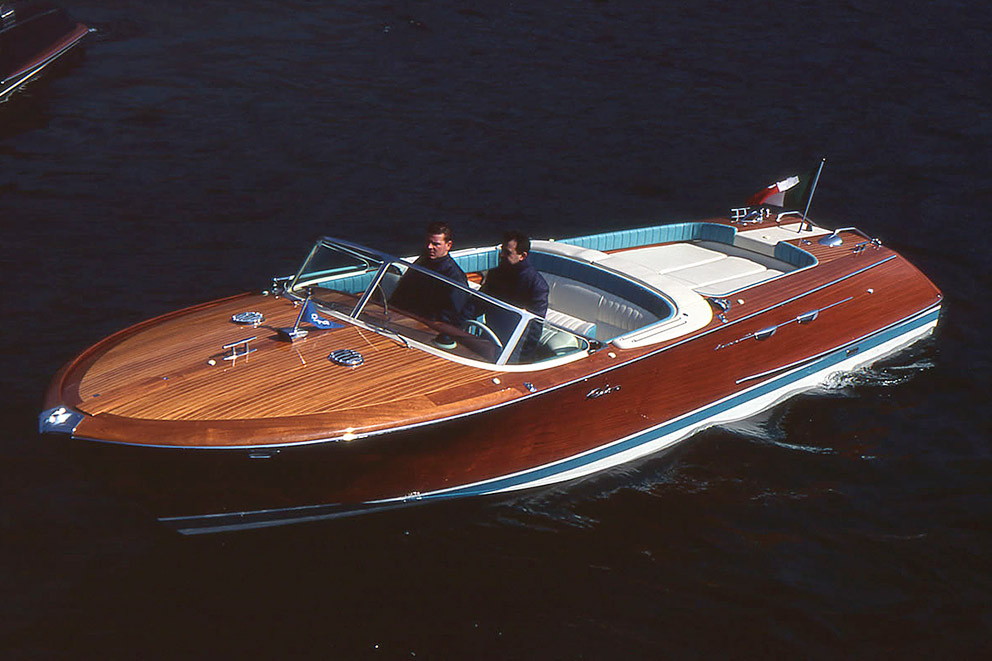 Diva named Riva: To this day, the “Aquarama” is considered the epitome of a Riva boat. Photo © Riva/Ferretti Group

Design history has its own razzmatazz. The romantic story goes vaguely as follows: It’s 1966. Gunter Sachs – heir to an industrial fortune, bobsleigh pilot, photographer and Playboy – is busy wooing Brigitte Bardot, at the time probably the most desired woman in the world. One night at full moon he has red roses rain down from a helicopter on her La Madrague villa in the South of France, and then, wearing a tux, drew up at the jetty aboard his Riva. His efforts were rewarded. A little later there are photos showing the radiant couple – he in bathing trunks, she in a bikini – on board a Riva on the Côte d’Azur. Se non è vero, è ben trovato.

The Riva was both indispensable status symbol and stylish accessory for the “upper ten thousand” as the label went back in the comparatively staid economic boom years of the 1960s. The princes of Monaco, Princess Ira zu Fürstenberg, the Aga Khan, King Hussein, film stars such as Liz Taylor, Jean-Paul Belmondo, Sean Connery and countless members of the jet set were all proud owners of an open-top speedboat by Riva. On Lago di Como, on the Côte d’Azur or in the bay of St. Tropez well-tanned and well-heeled members of high society enjoyed water skiing behind the dark mahogany hulls or, away from overly inquisitive eyes, zipped off to bath in some secluded spot or to attend a party. Tempi passati.

Carlo Riva, born in 1922 in Sarnico on Lago d’Iseo, was the eldest son of wharf owner Serafino Riva. His dad mainly built racing boats to order – and had himself taken part in the early powerboat races. When Carlo took over the wharf in 1949 he started building a series of mahogany “pleasure boats”. At first, the boats simply bore a name consisting of two letters, from 1952 onwards they were given marvelous names, such as “Sebina” (after an old moniker for Lago D’Iseo); “Ariston” (after a movie house in Milan); “Florida”, as the sunshine state in the US was back then a truly cherished spot in the minds of many.

From 1958 onwards, the hulls were no longer made of planks but of armored laminate produced using Pirelli presses. The “Junior”, which came on the market in 1966 and was intended to appeal to the jeunesse dorée, boasted white lacquered sides, and visually already indicated the coming generation of fiberglass hulls. To coincide with the Mexico Olympics in 1968, the company launched the last series, the “Olympic”. In 1969, Carlo Riva sold the wharf, which had been owned by his family since the 19th century, but stayed on as Managing Director in Sarnico until 1971.

Boats by Riva are widely considered the ultimate sports coupé for the waterways, comparable to a Ferrari or Maserati for the motorways. Elegance, a sure sense of style, and masterful craftsmanship combine to form a steadfast unity unparalleled to this day. Only the very best materials were used, and precisely worked on the basis of countless years of experience in boat-building. Even the slits of the screw heads were all aligned in a single direction. It bears noting that Carlo Riva took his cue from the American runabouts made by Chris Craft, but adapted the idea such that thanks to the reclining area they could be used just as easily for sunbathing as they could to pull water-skiers. A wooden Riva speedboat not only had an unmistakable look. Carlo Riva optimized the lines of the hull such that the bow wave formed a perfect V. Not only did the wave look great, it was ideal for water skiing.

The classic Riva boats boast a hull made of seamless, dark-red mahogany planks. A powerful inboard engine with a glorious deep throb provided the speed. A lot of chrome, a strip panorama windscreen curved and tapering beautifully at the sides, a classy dashboard with a white or two-tone wheel, white, colored or slinky-patterned leather seats, and an upholstered reclining area behind them, as well as a slender stern all denoted a boat as clearly a member of the Riva flotilla.

You can’t go wrong with one of the old Riva Super Floridas, Tritones, Aristons or Aquaramas. The boats simply exude class by the knot; they’re sturdy and glamorous at once, never flaunting or flashy. Quite unlike many a speedboat or yacht that gets rolled out today. Gunter Sachs, who of course owned not one but several Rivas, once described the diva named Riva as “the Italian sense of style perfected, combined with the precision of Swiss clockwork and the reliability of US top-end engines.” The inboard engine was invariably a powerful eight-cylinder Chrysler or Cadillac, or, on request, a Lamborghini.

When the “Aquarama” was first presented at the Milan Boat Fair in 1962 Riva-fever hit an all-time crest. To this day, the “Aquarama” is considered the epitome of a Riva and it swiftly became the ultimate object of desire among the rich and glitzy. Whether the name alluded to the panorama windscreen or not, it certainly derives from the US widescreen movie-theater format, the “Cinerama”. The “Aquarama” was followed by further models, such as the “Aquarama Super” and the “Aquarama Special”. Although as of 1969 the wharf was also busy building fiberglass hulls, it was not until 1996 that the last “Aquarama Special” was floated. Today Riva is a member of the Ferretti Group and is still manufacturing luxurious motorboats and yachts. Sadly a glance in the logbook shows that none of them are now made completely of wood. 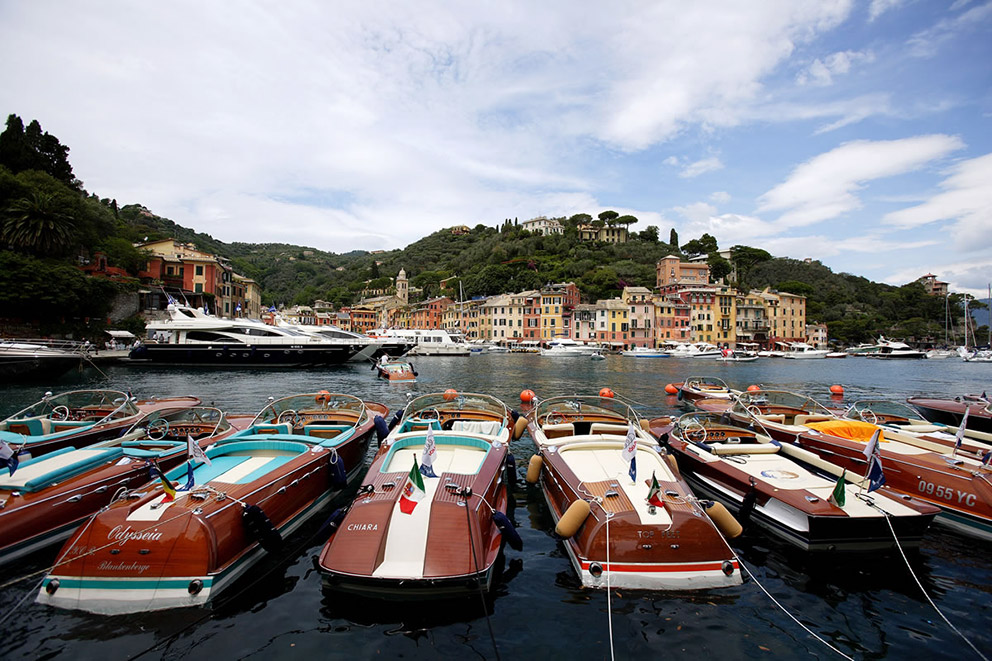 Each year the Riva-aficionados get together – here in 2007 at Portofino. Photo © Riva/Ferretti Group 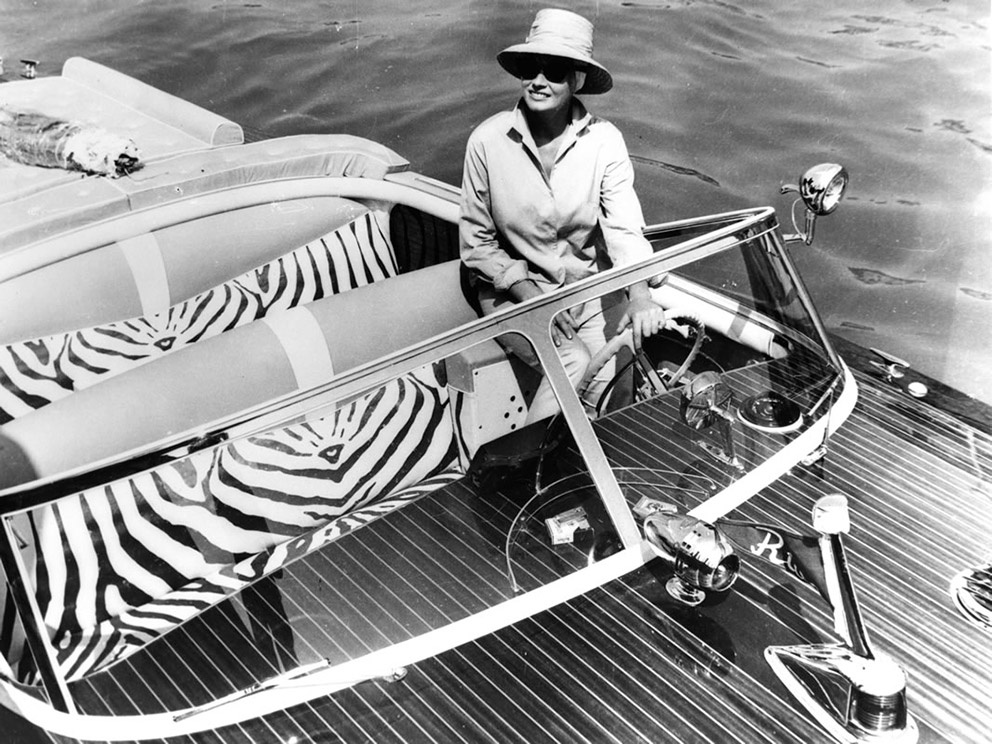 Anita Ekberg in her Riva “Tritone“ from the year 1960 that had the special zebra upholstery textile that was integrated in just a few boats. Photo © Riva/Ferretti Group 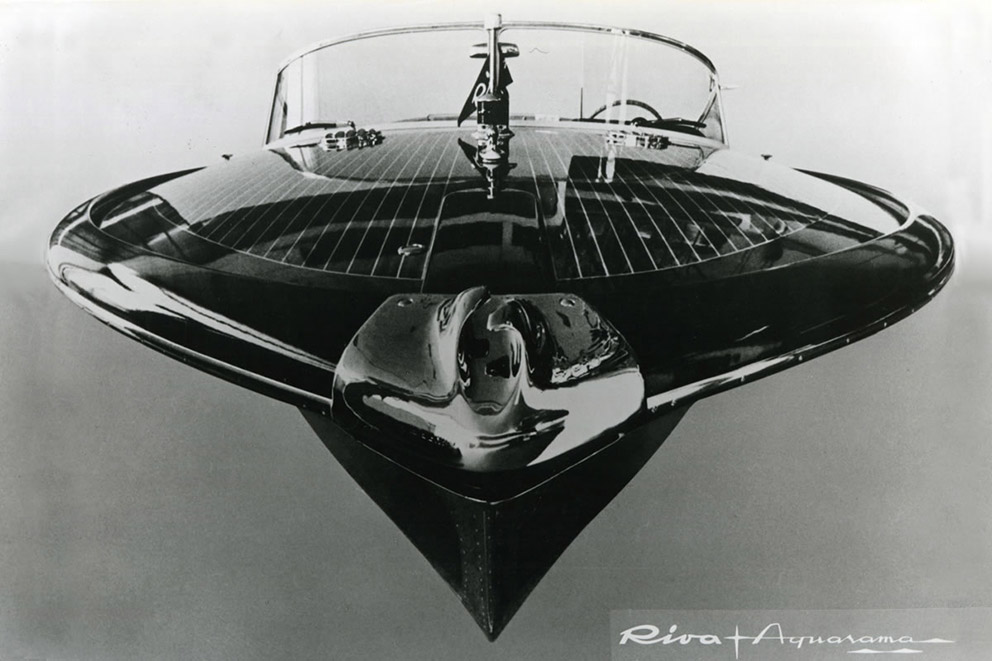