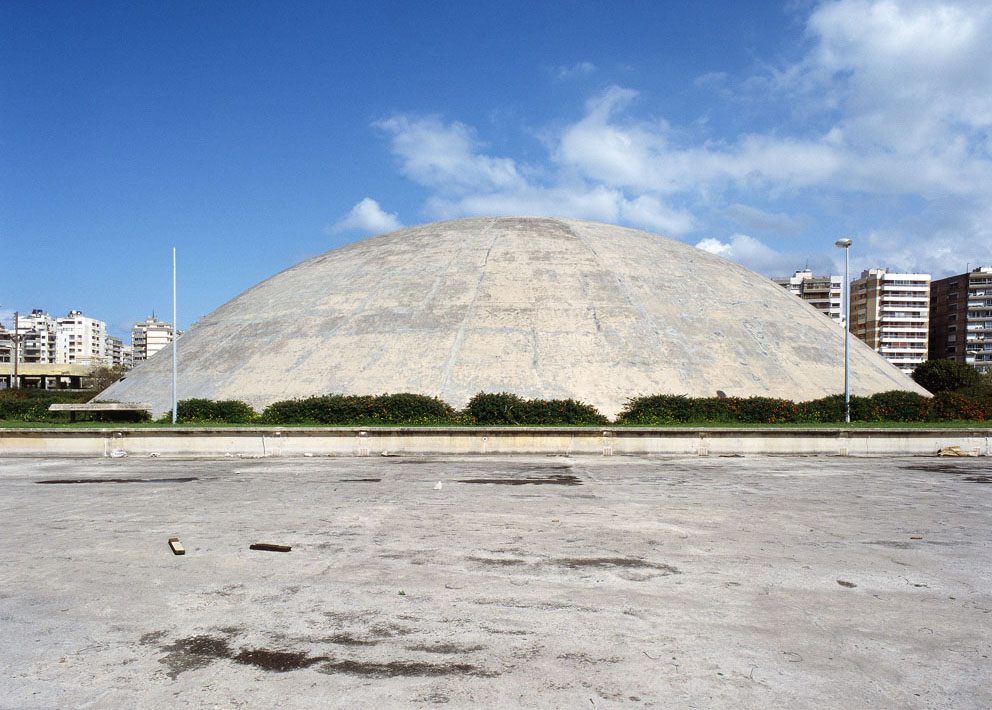 Nothing but concrete – does this spawn pure beauty or only a mass of grey? During Modernism, concrete advanced to become one of the most popular building materials and it defined emerged the shape of a vast array of different buildings. Where it takes the field as fair-faced concrete, coarse and with absolutely no frills, it develops a quite unique aesthetics: Solid concrete towers morph into striking sculptures thanks to refined incisions or bends; roofs made of concrete bulge into semi-spheres and almost float over the ground. A building made of concrete can, however, equally be as rigid and rough as a cliff.

In his photo book “Modern Forms, A Subjective Atlas of 20th-Century Architecture” Swiss photographer and artist Nicolas Grospierre brings together an array of such buildings made of completely undressed concrete, above all those that have striking sculptural shapes. His subjective atlas records countless lesser-known 20th-century buildings – in the former Soviet, the Middle East, Europe, Latin and North America. They include bus stops, clinics, sports halls, car parks, churches, theaters and museums, not to mention residential structures, hotels, private homes and office buildings. 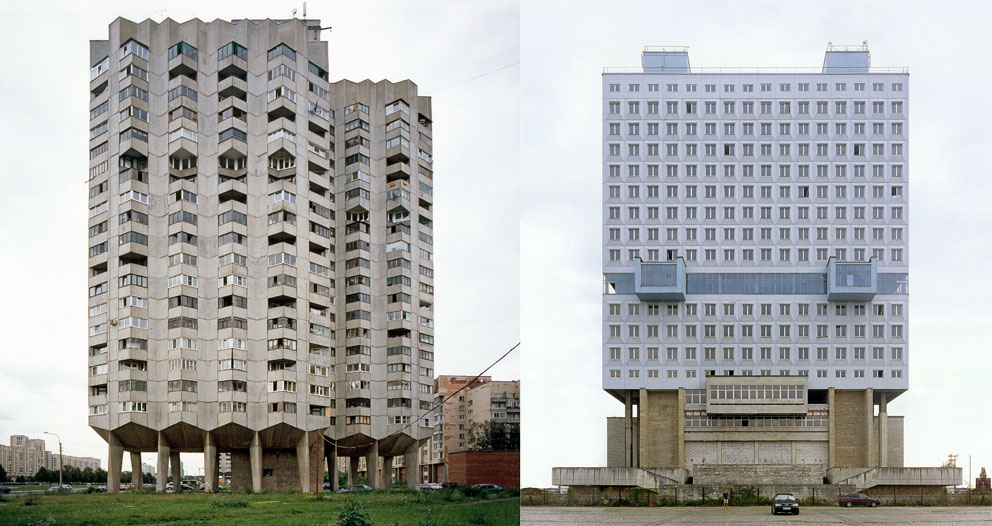 Socialist images of society and political ideals: The “Residential Tower” by Lenniiproiekt (on the l.) was built in St. Petersburg in 1987 as part of a large house building project. The “House of Soviets” designed in 1988 by Yulian L. Shvartsbreim resembles a modern castle for the red Tsars. Photos © Nicolas Grospierre

The impact of grand gestures

Grospierre’s photographs present the buildings usually quite prominently and in barren surroundings, often bereft of humans. In this way he shows them to be standalones, emphasizing their expressive, iconic qualities. When leafing through the opulent volume you soon notice that the arrangements of the photos bears a similarity to the geometric underlying forms of the buildings. At the same time, the book is circular in the sense of forming an endless loop: The first photograph is also the last in the beauty show of images. The simplicity and clarity of the photographs corresponds perfectly with the variety of built forms we peruse.

Nevertheless, the buildings in Grospierre’s photographs do not freeze into eternal monuments. In part almost in ruins, they actually attest to the transience of architecture, whereby the grand gestures indeed the impact or even the brutality of the volumes of grand buildings fade over time. The sequence of images may be quite stringent in formal aesthetic terms, and essentially other references thus get marginalized: Information on the classification of all the edifices in architectural history is only to be found at the back of the book. An index at least offers data on name, place, architect and date of each structure. 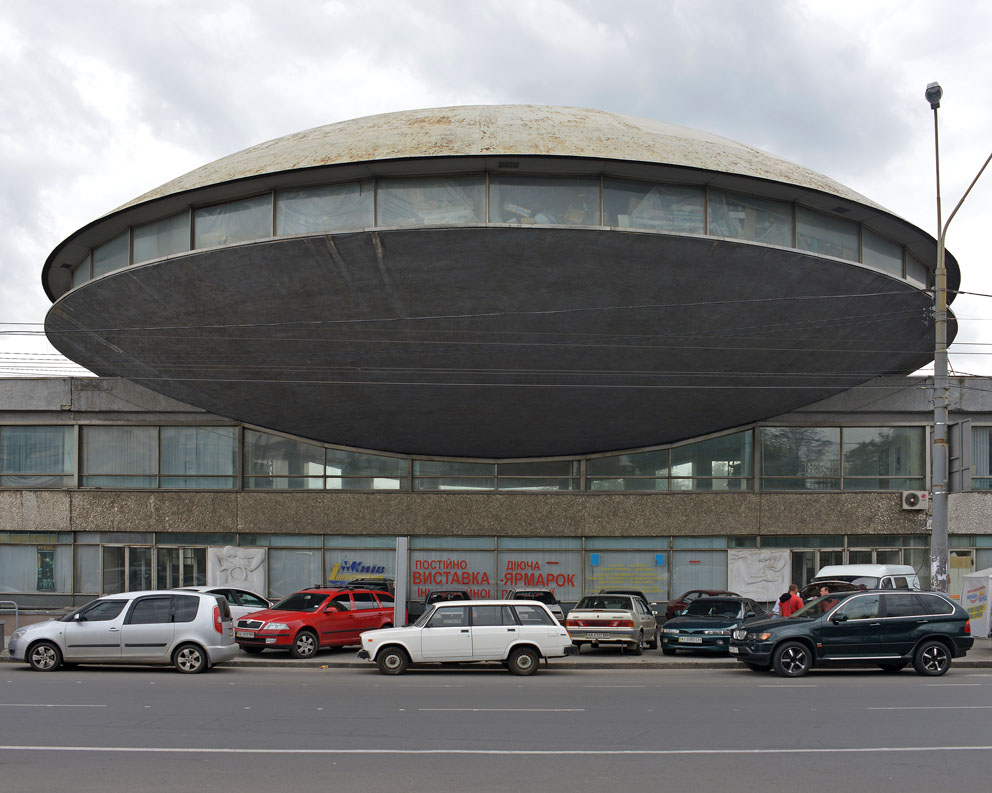 Built Soviet sci-fi: the “Institute of Scientific Research and Development” in Kiev (Ukraine) built in 1988 by L. Novikon and F. Yuriyev has the look of a terminated ET object about it.
Photo © Nicolas Grospierre

From UFO to residential tower – they’re all there

The range of types of buildings present spans some 80 years of architectural history and is immense, as are the forms evidenced, or for that matter the reading of the term “Modern” here. Alongside strange UFOs, the atlas includes a series of Expressionistic buildings with crenellated or vaulted roofs and walls, as well as block-shaped residential towers, resembling Le Corbusier’s Unité d´Habitation in Marseille or the Barbican Centre in London. There are mushroom-shaped structures such as the Salyut Hotel in Kiev, built in 1984, the Balneological Hospital Water Tower” built in 1980 in Lithuania, or the Tiflis Ministry of Highways, dating from 1974 – as well as the iconic cast concrete “Gate Way Arch” in St. Louis of 1965. A lot of the examples originate in the 1960s and 1970s, a phase of major architectural utopias and plans to rejuvenate cities. There are also traces of Soviet Constructivism, early Modernist designs and post-War Modernism buildings to be found. 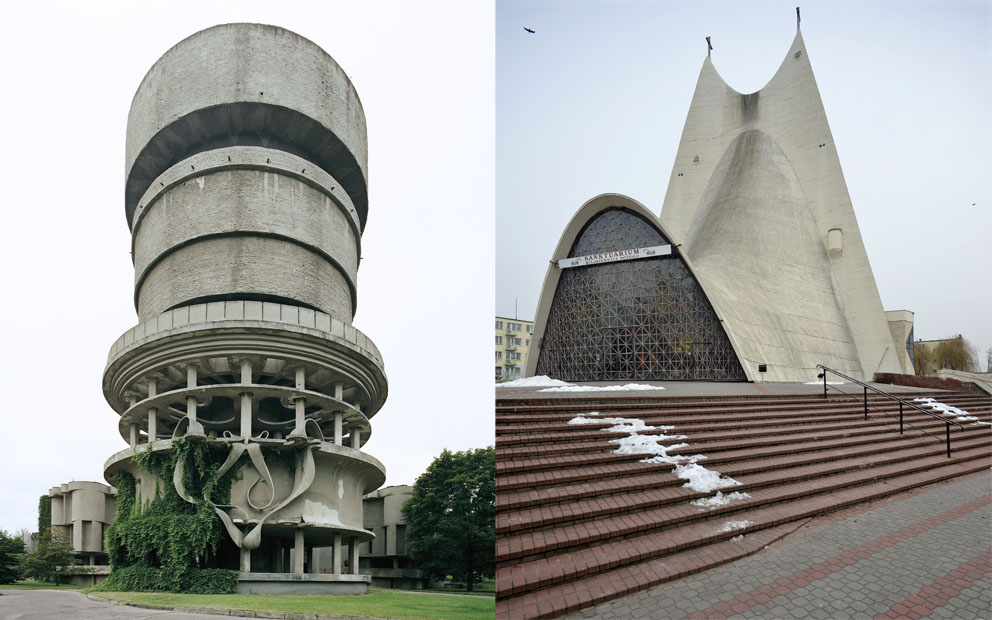 Urban sculpture: the decorative “Balneological Hospital Water Tower” by A. Šilinskienė and R. Šilinskaswater dating from 1980 served until 2006 as a water storage for a hospital in Lithuanian Druskininkai. The “Sanctuary of the Divine Mercy” by J. Kuźmienko and A. Fajans arose between 1977 and 1993 in Kalisz, Poland. Photos © Nicolas Grospierre

With his interest in iconic concrete architecture, Grospierre is certainly not alone at present. Quite on the contrary. Especially the rough concrete styles of Brutalism and Modernist Expressionist works have become very popular again of late. Especially in social media networks, there is a veritable hype around these grey giants and rough-and-ready shapes. Even Deutsches Architektur Museum (D.A.M.) has set up a database on the forgotten Brutalist buildings, quite apart from Blogs such as “Fuck Yeah Brutalism” with historical black&white images or the “Brutalism Appreciation Society” on Facebook, where forgotten concrete buildings in remote regions and better known edifices around the world are shared. Nicolas Grospierre likewise posts on his blog images of Modernist concrete builds. Over the last 15 years he has compiled an archive of architecture photographs and regularly shared these with an Internet community. A selection of his images are presented in concentrated fashion in the net “Atlas”. 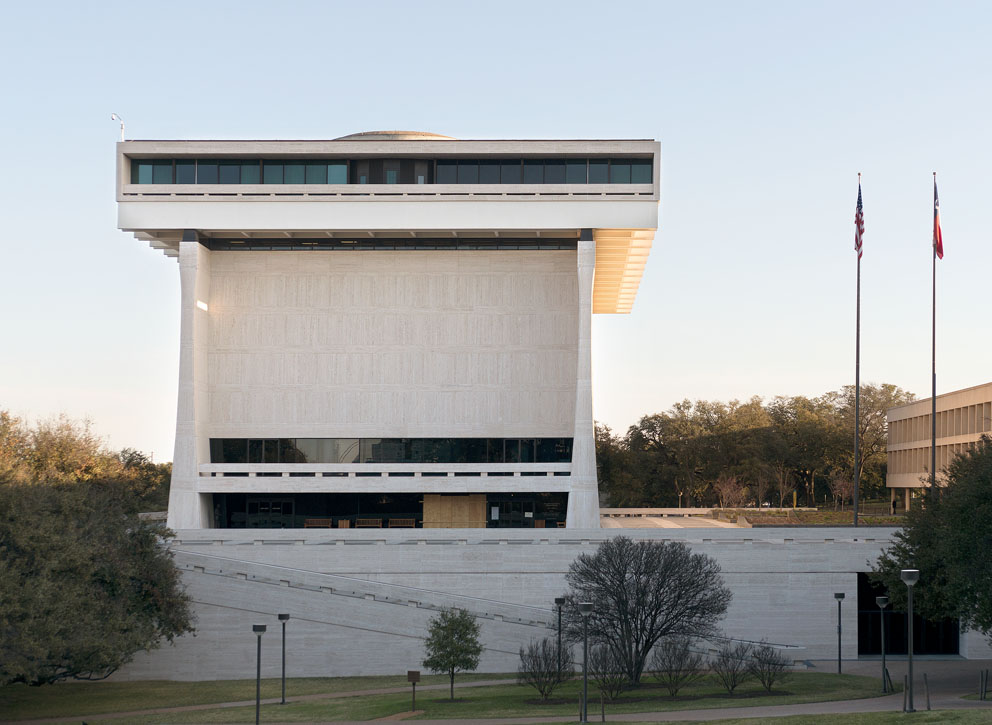 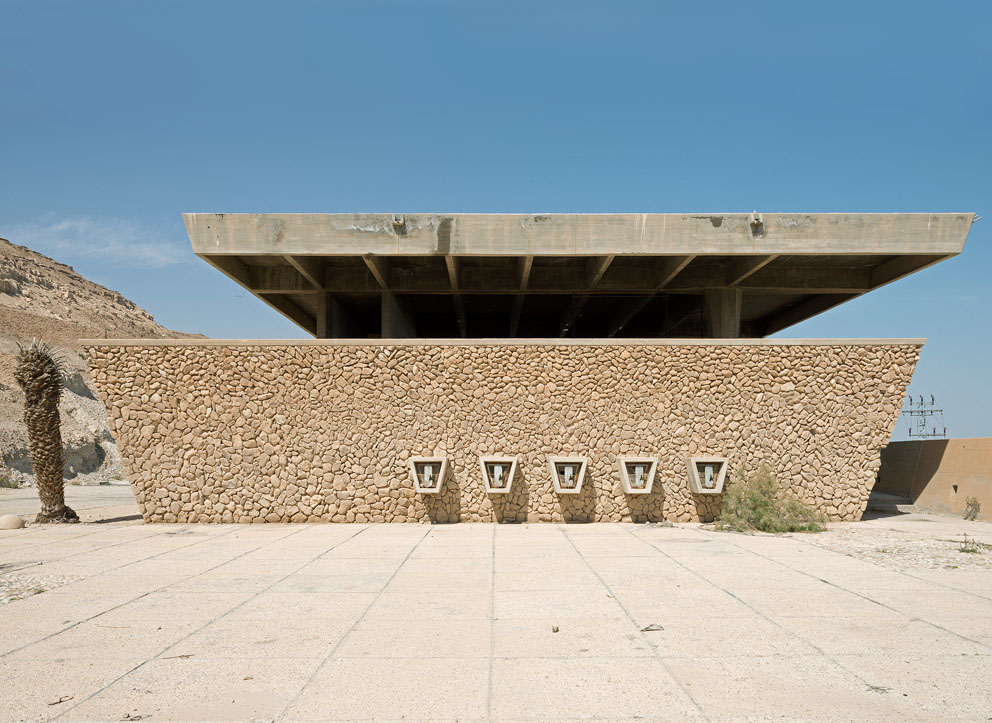 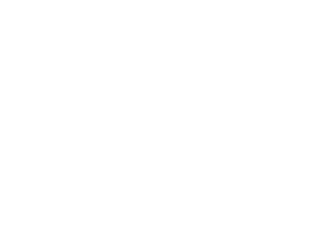