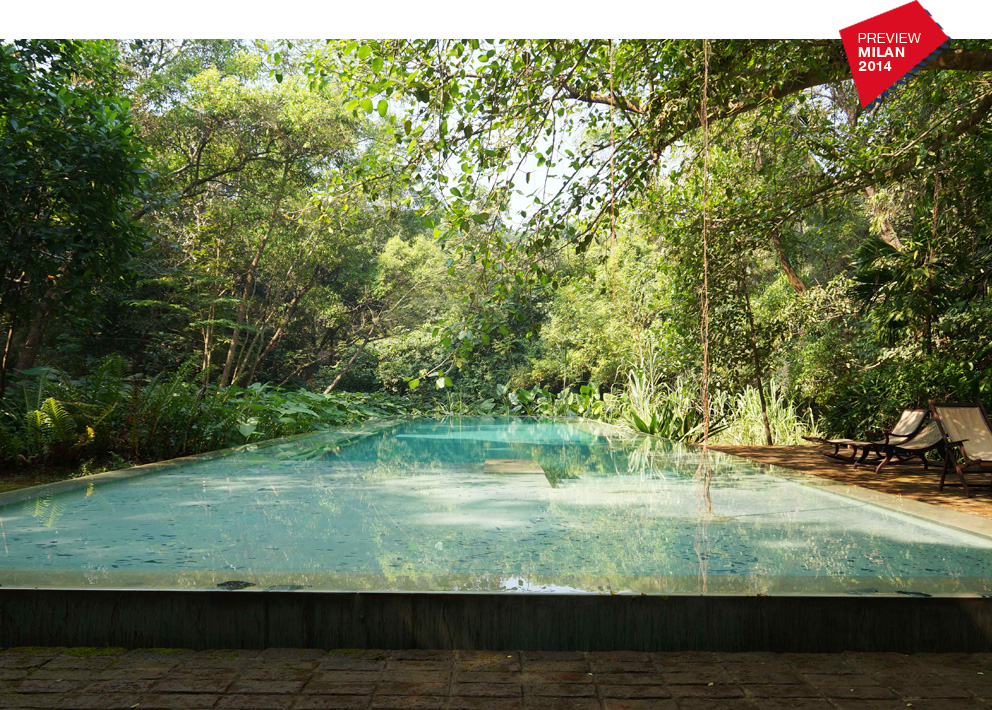 This is Studio Mumbai: Indian architect Bijoy Jain lives and works in his house with many dogs and a large swimming pool. Photo © Francesca Molteni

One of them lives in a forest not far from the coast of the Indian Ocean, the other in a high-rise in New York. While Bijoy Jain considers his home an open space that welcomes anyone who happens to come by, Daniel Libeskind’s apartment in Tribeca, not far from “Ground Zero” and “Freedom Tower”, is a real sanctuary, as he himself says. Libeskind, born in 1946, has led a restless life, which has taken him from Łódź in Poland first to Tel Aviv, then to the United States, to Berlin, and finally, in 2003, to New York. There the architect, whose major achievements include the Jewish Museum in Berlin, was commissioned with the development of the grounds that used to be home to the World Trade Center. Even though he lost the contract in 2005, he decided to stay in Manhattan.

So where do architects live? The Milan Furniture Fair sheds light on the issue by presenting the private surroundings of eight of them. To prepare the show, Italian film producer Francesca Molteni paid a visit to the homes of some of the world’s star architects – and now their houses and apartments can be eyed at the “Salone del Mobile”, including pictures, videos and installations. The big hitters were: Brazil’s Marcio Kogan, Japan’s 2014 Pritzker Prize winner Shigeru Ban, England’s David Chipperfield, American David Libeskind (originally from Poland), Zaha Hadid, who was born in Iraq but now lives in the UK, Indian Bijoy Jain, as well as the Italians Mario Bellini and Massimiliano Fuksas with his wife Doriana.

Bijoy Jain (born in 1965) established Studio Mumbai in 2005. Today the collective includes some 60 architects and local tradespeople among its members, who live and work in the countryside nr. Alibag, some 30 kilometers south of Mumbai. In his house there is a constant coming and going, with people enjoying short refreshing breaks in the pool or playing with one of the many dogs around. Jain, who counts architect and Pritzker laureate Richard Meier among his mentors, champions sustainable building methods, and particularly so in his home country. 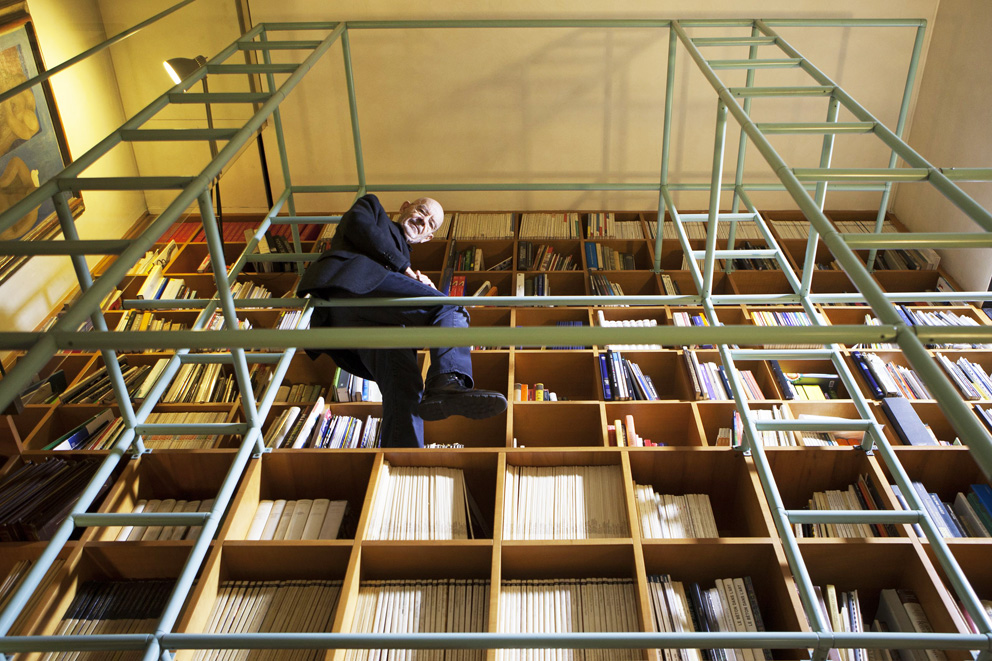 Marcio Kogan, (born in 1952 in São Paulo) is also a filmmaker and represented his country at the 2012 Venice Biennale with a humorous short film. “Peep” was the title of the piece, which he created together with Lea Van Steen. Like a voyeur the camera traces the everyday business of a family in their home. The building in question is a private residence named “V4” that Kogan designed in São Paulo. Kogan lives in the selfsame Brazilian megacity. His first ever design, the block promptly won an architectural competition in 1980. His apartment on the 12th floor is crammed with mementos from all over the world, many referencing movies, including a whole host of comic characters. 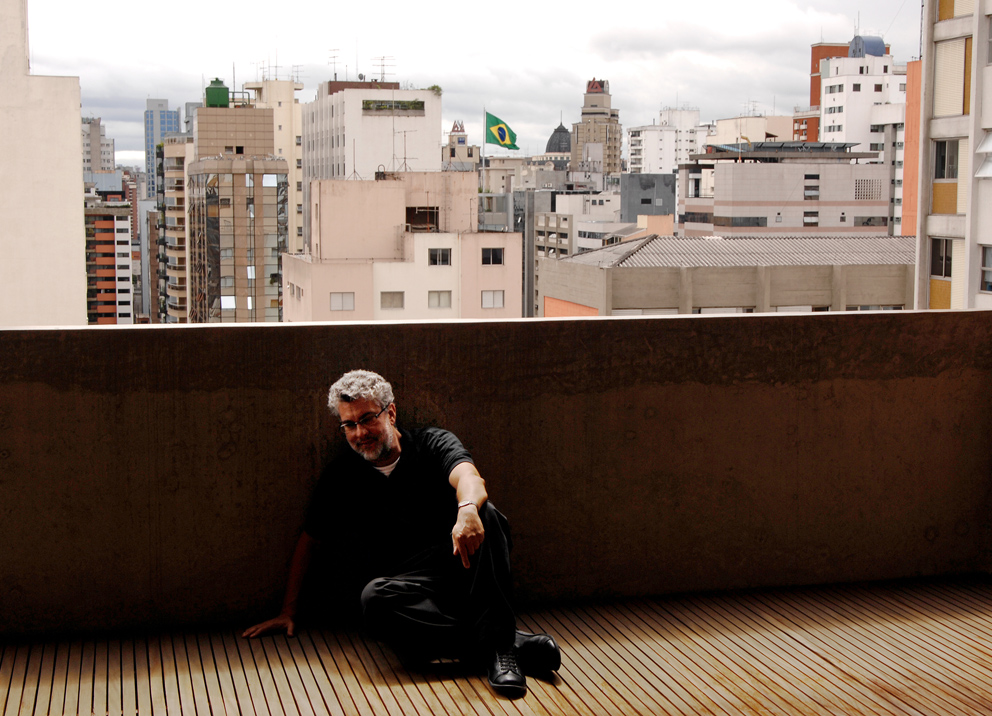 12 floors above São Paulo: Brazilian architect Marcio Kogan on the balcony of his apartment, which is situated in a complex that he designed. Photo © Romulo Fialdini

David Chipperfield, (born 1953) invited Francesca Molteni to come to Berlin, where the Londoner has been living more or less regularly since 1997. Back then he bagged the contract for the masterplan for Berlin’s “museum island”. Not far from the German capital’s swish Mitte district he erected a building entirely of concrete, which in addition to his studio and apartment houses a restaurant that is open to the public. 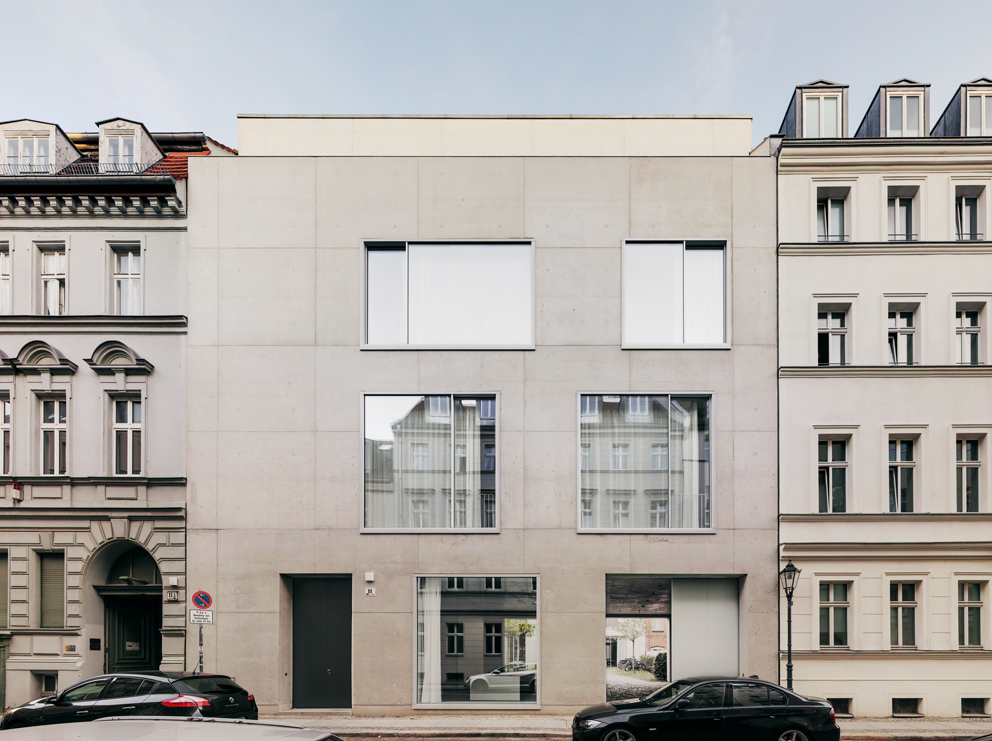 3-in-1: David Chipperfield’s house in Berlin-Mitte is not only his residence, but also his studio and a public cantine. Photo © Davide Pizzigoni

Zaha Hadid, who refers to herself a as a gypsy, calls her home that of her childhood days in Bagdad, the home of her parents. Today Hadid (born 1950) lives in a light-suffused apartment in London. The walls are adorned by some of her own early paintings which were inspired by Russian avant-gardist Eliezer “El” Lissitzky. 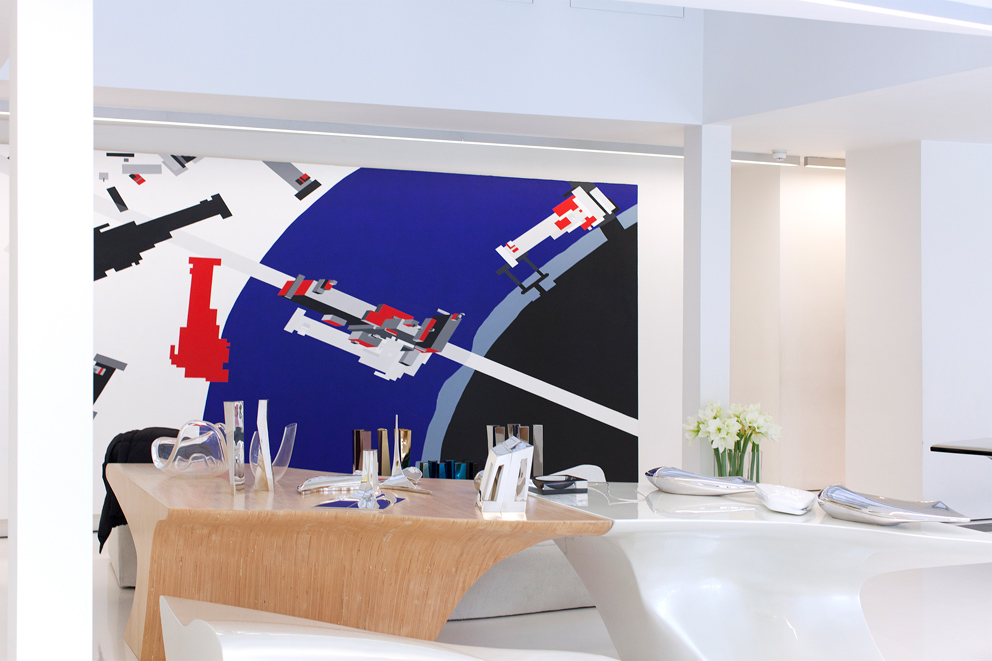 Even if Zaha Hadid describes herself as a gypsy, she has made herself comfortable in London. Photo © Davide Pizzigoni

Mario Bellini (born 1935), on the other hand, apparently dreams of living in a white cube. Until that happens, the Milan architect will stay living and working in a 19th-century house that Piero Portaluppi modernized in the 20th century. A nine-meter high library forms the heart of the building, with the remaining rooms are grouped around it. 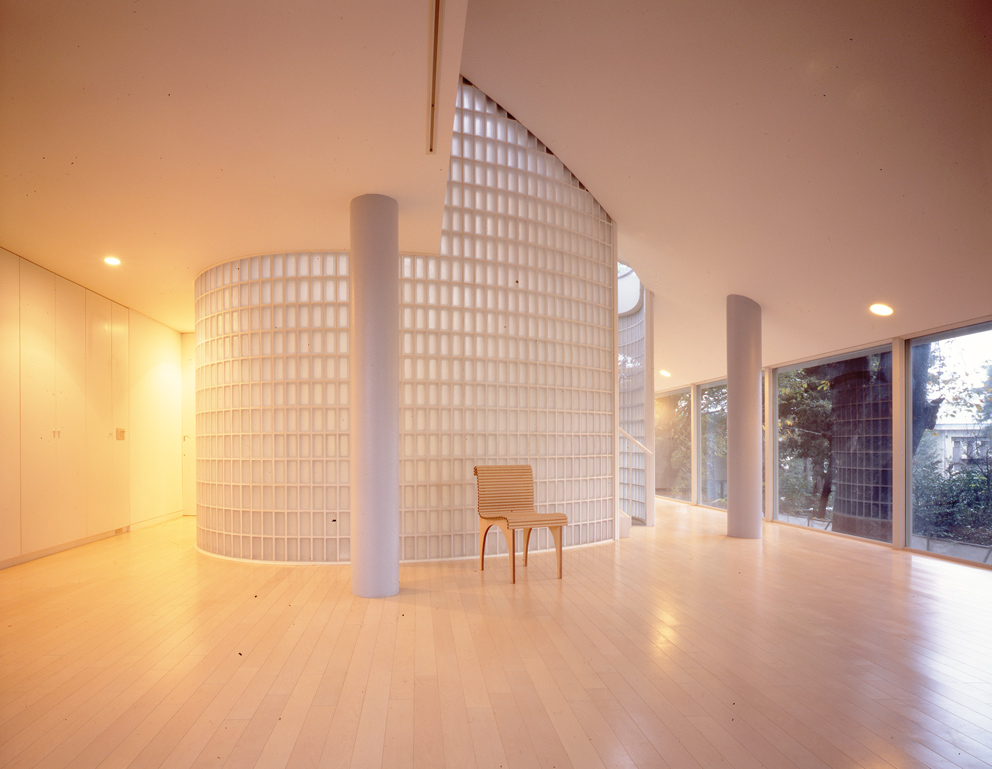 Shigeru Ban is famous for his Hanegi Forest architecture in the middle of a Tokyo wood. He did not allow a single tree to be felled for the building, in which he lives himself. The Japanese Pavilion made of cardboard for the Expo 2000 in Hanover, for which he teamed up with the German architect Frei Otto, was the Japanese architect’s (born 1957) claim to fame in Germany and his Centre Pompidou in Metz consolidated his reputation in France. 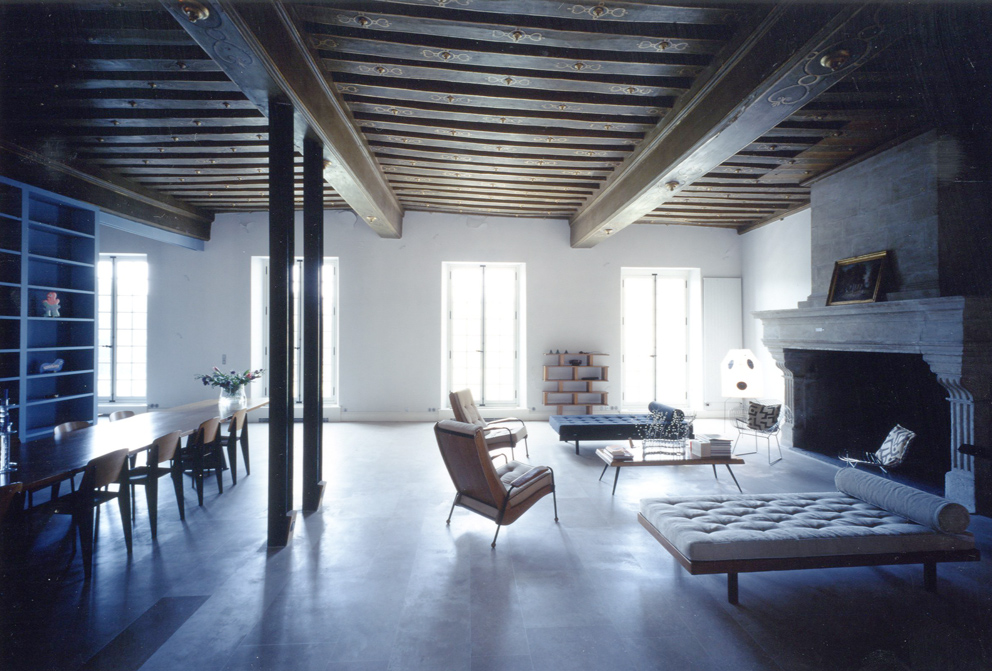 Last but not least, the Fuksas, originally from Rome, opened the doors of their home on Place des Vosges in Paris, which is furnished with original Jean Prouvé pieces and valuable artworks. The couple rose to fame in Germany with their “MyZeil” shopping center in Frankfurt. Moreover, the name Massimiliano Fuksas (born 1944) is inextricably linked with the Milan Furniture Fair: He masterminded the new tradefair grounds “FieraMilano” in Rho and Pero outside Milan.

› Read more about the exhibition "Where Architects Live"