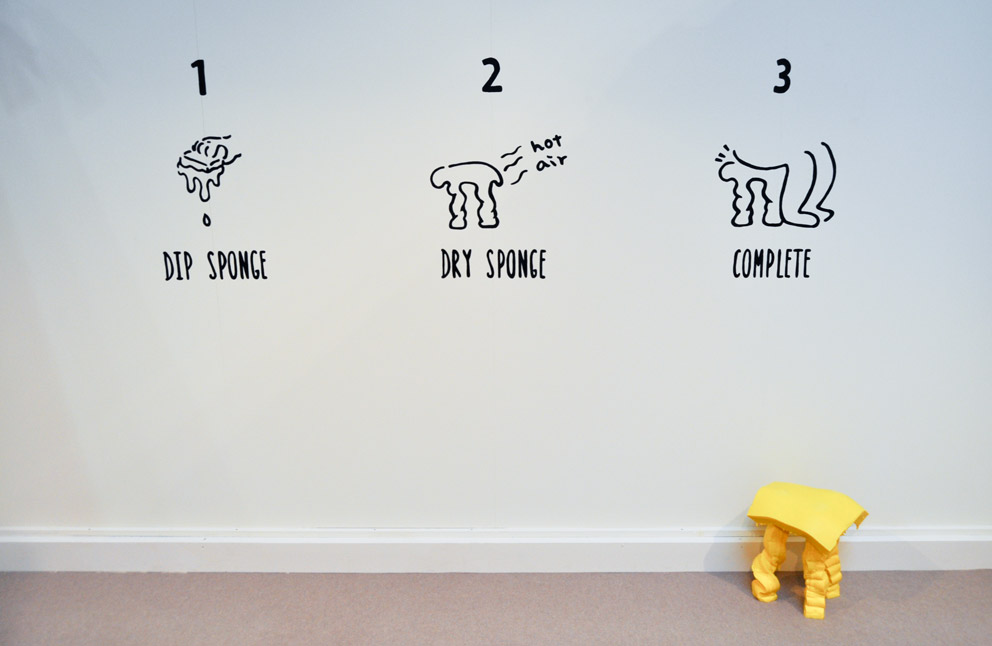 Much downright wit and enthusiasm at the Salone Satellite – like the “Fondue Stool” by Satsuki Ohata from Japan. Photo © Martina Metzner, Stylepark

“Many young designers devote all their energy to becoming a designer brand and concentrate less on making good products.” The man who uttered these words should know: Oslo’s Daniel Rybakken, now based in the Swedish city of Gothenburg, has just been awarded the Compasso d’Oro for his luminaire, “Counterbalance”. For the design he teamed up with Italian manufacturer Luceplan; they also collaborate on other projects. Of course there was a time when Rybakken too was starting out in his career and exhibiting at the Salone Satellite. It was here that back in 2009 he won 1st prize for an LED panel that is able to emulate daylight. Today he has secured himself a place to which many an up-and-coming talent aspires. And the Salone Satellite, often deemed the “small Salone” of the Milan Furniture Fair, is still considered a stepping stone on the way.

A total of 700 budding designers and 18 design colleges gathered for the 18th edition of the Salone Satellite to present young, fresh and unorthodox design offerings. Sadly, this year’s satellites did not quite rocket skywards, with outstanding talents far and few between. It seems that the young talents have pushed the copy & paste buttons a little too often, showcasing items that have been glimpsed abundantly in similar variants. Rybakken was appalled, and quite rightly so, that his “Colour” luminaire, composed of slabs of stained glass and showcased at Satellite in 2010 and now brought out by e15, has been imitated countless times in recent years. It comes as no surprise, then, that this year we again discovered yet another of “Colour’s” false friends. And there are plenty of similar examples. Didn’t we see that table luminaire with the little lady’s hat back in Stockholm? Only too often designers fail to add a new and clever twist to their formal citations of past designs – nipping any chance of progress in the bud.

Careers culminating in a blog

Another phenomenon that is increasingly witnessed amongst the up-and coming talents is “Facebook-friendly design”: Objects are consciously engineered to sell in the social networks and blogs and attract scores of “Likes”. As it is, these visual one-liners at best bring a wry smile to your face. Last year it was the trompe l’oeil designs by Japanese duo Yoy, which were promptly honored with 1st prize, this year’s winner is “Jars”, a luminaire by Bratislava-based Mejd Studio, which boasts a shade that emulates the top half of a jug, making it the perfect item for quick on-screen consumption. Mind you, quite often the fame of these objects extends no further than a few blog entries or sales on Etsy or Dawanda.

So what then is “the next big thing”? The makers of the Salone Satellite were unanimous in their verdict: It’s 3D printing. Not without reason they named Shanghai’s 3D-printing company Xuberance the winner of the “Salone Satellite Award” for their extraordinarily delicate, 3D-printed luminaire “Cloud Series Lamp”. Incidentally, Xuberance was not the only Chinese company to present at this year’s Salone Satellite, and quite surprisingly so. After all, the trade fair’s preamble stipulates that participants must be under 35 years old and that no entry may have gone into industrial or crafts production or be the subject of ongoing commercial activity.

In fact, it’s fair to say that Asia dominated the Satellite as never before. The surge in young design participants from Japan, South Korea and China means that no matter where you look you will find yourself contemplating neat Origami artworks, little receptacles with zips and all manner of beautifully made accessories – offerings you expect to find at an upscale arts and crafts market.

The lightness of youth

Several concepts that favor an artistic approach over functional design, such as those by artists Ines Gomez and Gunilla Zamboni, grabbed our attention. While Ines Gomez takes elements of furniture and puts them back together again in line with a Cubist principle, Zamboni focuses on the topic of climate change: Her dresser made of squared timber beams is supposed to kindle associations with stalactites, and even if this image does not readily spring to mind, the two items showcased in front of tapestries featuring dark landscapes succeed at least in leaving a lasting impression on you.

It’s above all the Japanese who are displaying objects that exude much downright wit and enthusiasm – while being decidedly more complex than the aforementioned “Facebook designs”. A case in point is Satsuki Ohata’s “Fondue Stool”, which he shapes out of foam and subsequently dips into hot paint to achieve a solid structure once it’s dry. Another is Kairi Eguchi from Fukushima, who has given a chair a backrest made of clotheslines to which you can attach postcards and other beautiful knickknacks – plus you get to sit up high. Incidentally, we came across the very same typology again, namely among the pieces presented by Belgian’s Pierre-Emmanuel Vandeputte. So have these young designers resolved to grab our attention by letting us take a seat several centimeters above the rest?

Markus Johansson’s chair design is just as tongue-in-cheek: The Gothenburg designer has translated the principle of a line that links up different dots into the structure of a chair. Judging purely by its looks and with its connotations to past chairs we have seen from Dirk van der Kooij and Front it could be mistaken for something that came out of a 3D printer. Admittedly, Johansson only printed the prototype, from which he took a silicone impression to render the shape for the final fiberglass models. A wonderful example that demonstrates how 3D printing is used in design.

Making the leap to ingenuity

Finally we are fortunate to discover those ingenious objects that need not rely on tongue-in-cheek presentations to make the leap across to the Salone proper. Daisuke Kitagawa from Yokohama in Japan has made a standard lamp whose conical shade features a slit that enables it to be tilted by 360 degrees and wrap around the stand. “Cliq”, a coat hanger system devised by Lithuanian design cooperative Flow Design, is likewise destined to turn heads. Instead of a hook the coat hangers have been fitted with magnets – a practical solution in particular for fashion stores as it puts a stop to having to hook the hangers in, which can be a tedious activity.

Having spent four hours walking around the Salone Satellite we came to the conclusion that most of the answers young designers have offered to current and future questions leave much to be desired. That said, in Milan these answers are not only to be found at the Salone Satellite. The multifaceted offerings and presentations by young designers at the Fuorisalone and above all the design colleges that tended to exhibit in the city this year, are just as exciting and insightful.