James and David Ardinast have opened a new restaurant, as always a reason for excitement. After all, the two brothers are not your typical restaurant owners, but superbly networked all-rounders with a knack for mixing art and music scenes, bar and club life; In fact, they’re pros in making their projects that little bit special with a quite unique mix of international charm and local flair. They have long since proven their salt with previous endeavors, including “Ima Multibar”, the restaurant “Chez Ima” and the “Maxie Eisen” pastrami eatery-and-bar, a joint project with Berlin restaurateur Oskar Melzer (Stylepark article from 3th March 2014). Now the Ardinast/Ardinast/Melzer trio has added another icon to Frankfurt’s must-visit eateries: “Stanley Diamond” is their latest brainchild, a restaurant and bar that, according to James Ardinast, they intended to be Maxie Eisen’s big brother. Not only the name (like Maxie Eisen, Stanley Diamond was a protagonist of Kosher Nostra) points to the fact that the two eateries are cut from the same cloth, but as regards the design the Ardinast brothers have followed the same thread – albeit a little more consistently.

At first sight, the Stanley Diamond appears classy, with rough and flamboyant elements thrown in, but never cluttered. A smart design move that eschews any pigeonholing. “When developing the Stanley Diamond, we thought of classical Italian hotels with those weighty marble receptions,” James Ardinast explains. Moreover, as with the Maxie Eisen, the 1920s provided the cue for the Stanley Diamond’s interior, albeit this time round the maker favored a slightly more dignified style. Which is nonetheless a far cry from any notion of a romanticizing “vintage look”; on the contrary, upon closer inspection the collage of different materials, colors and textures employed here transpires to be an extensive collection of citations. Tracing their origins would no doubt provide many an hour of fun. The colors in the voluminous upholstery with the coarse fabric covers allude to the dignified interiors of 1960s living rooms, but would have looked equally well in a 1920s hotel lobby. While the green marble on the far wall and bar would have been equally impressive in the lobby of the Seagram Building – or in a typical 1980s director’s office.

The combinations in the materials are anything but pleasing to the eye, indeed they challenge beholders to spend a moment contemplating their personal taste preferences. “We did not want things to be perfect and sober,” Ardinast explains, and continues, “breaks were the overarching theme.” Consequently, the seaweed green marble wall stands on pink screed. The stoic grain of Indonesian oak clashes with the rough texture of the rust-colored upholstery cover, while the blue fabric in front of the green marble unsettles the eye. Continuing on from the matte gray wall is a ceiling that (thanks to delicately perforated brass acoustic panels, enclosed by a cumbersome ventilation shaft) work to give the entire ensemble a cutting-edge appeal.

For the architecture the trio teamed up with their architect friend Paul Bauer from Hollin+Radoske, for the interior they called on Frankfurt furniture makers e15 – in particular with Farah Ebrahimi, who dreamed up the color concept. In addition, the designers at e15 conceived the upholstery specifically for the restaurant. The pieces look plump and respectable. Armchairs and bar stools will soon be brought out as an edition. Ignoring the restrooms for the moment (with their rich moss green walls and old-school sanitary wares by Köhler including floor-to-ceiling urinals and American-style toilet bowls complete with painted washstand basins they do not quite fit the gentlemanly overall composition) Stanley Diamond’s interior is profoundly zeitgeisty, with reminiscences to local Frankfurt fare. For there, despite supreme efforts, bars and restaurants with makeshift seating furniture assembled from wine crates and euro-pallets have failed to catch on as like as perforated sandstone façades. In Frankfurt, Postmodernism is still flying at least some flags, or perhaps pennants. So it is only too fitting that following the hype of sobriety and functionalism, naturalness and practicality that has left its mark on most architecture and furniture design in recent years, we now get to wallow luxuriously in shapes, structures, textures, and materials. A little indulgence does no harm. 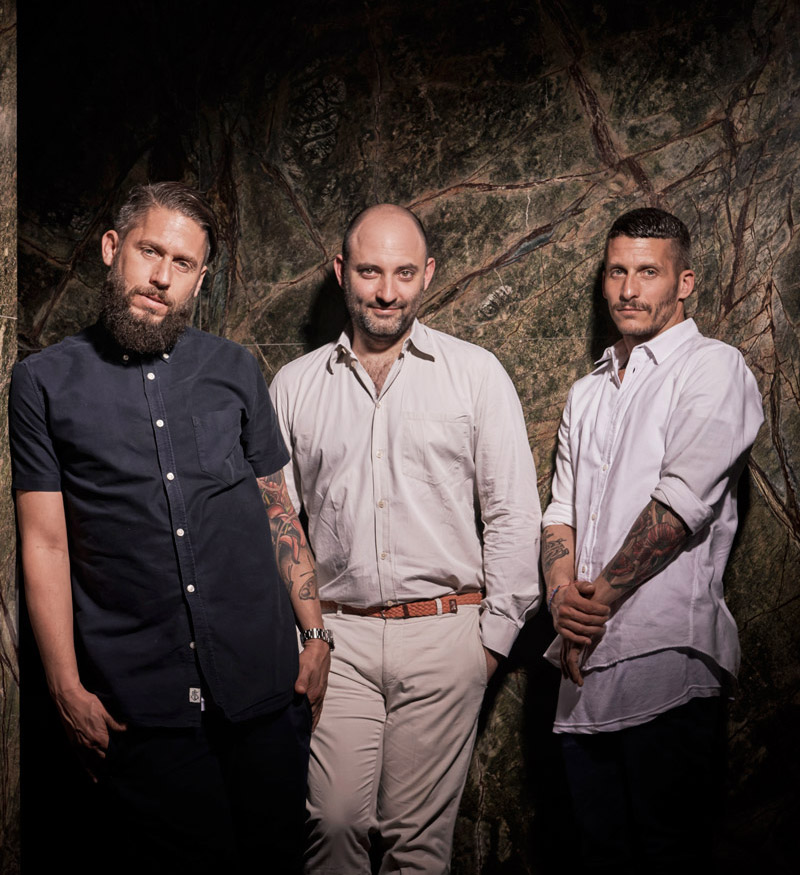 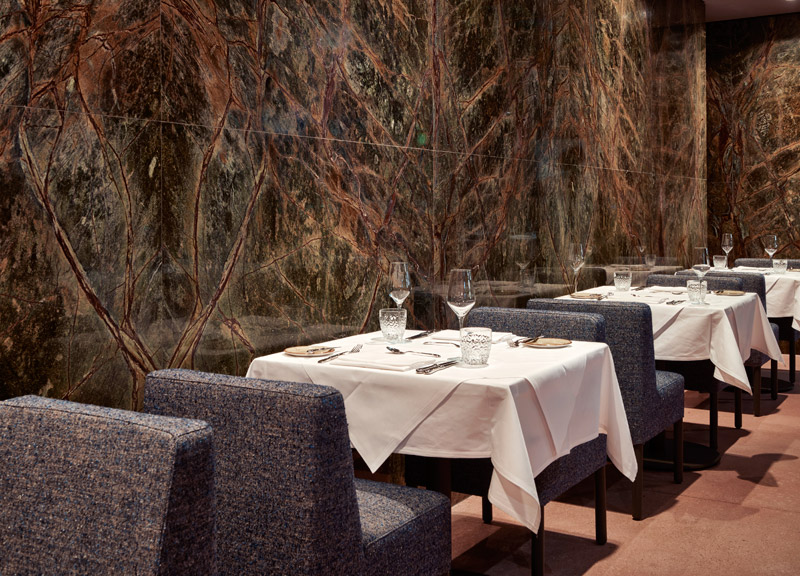 „We don’t want to be to clean“, explains James Ardinast. Photo © Stanley Diamond 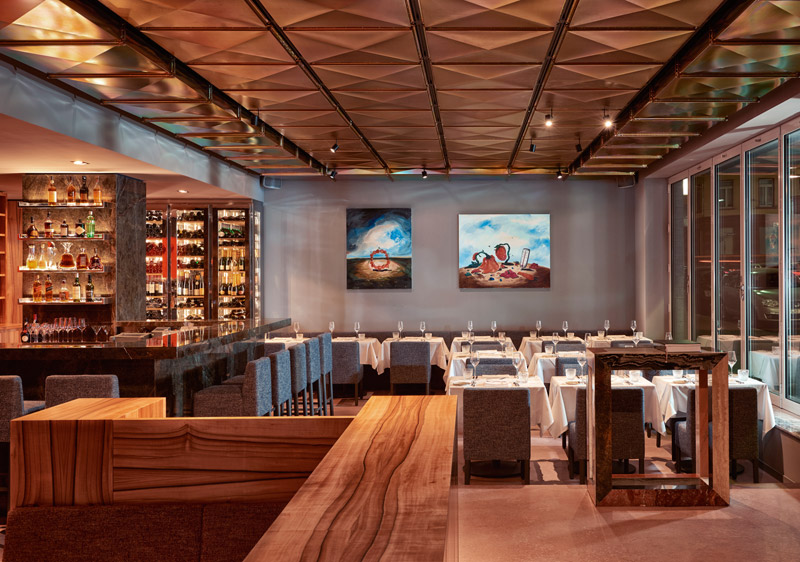 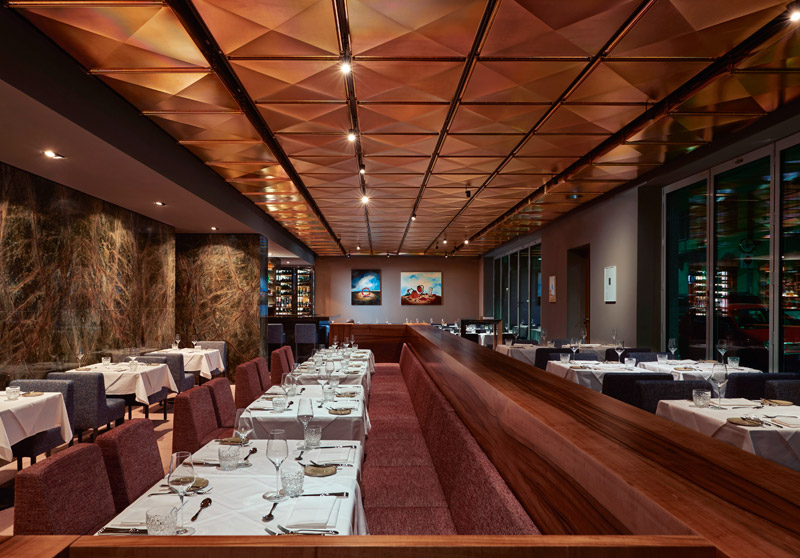 e15 has created a special armchair and the bar chair as like as a special upholstery fabric. Photo © Stanley Diamond 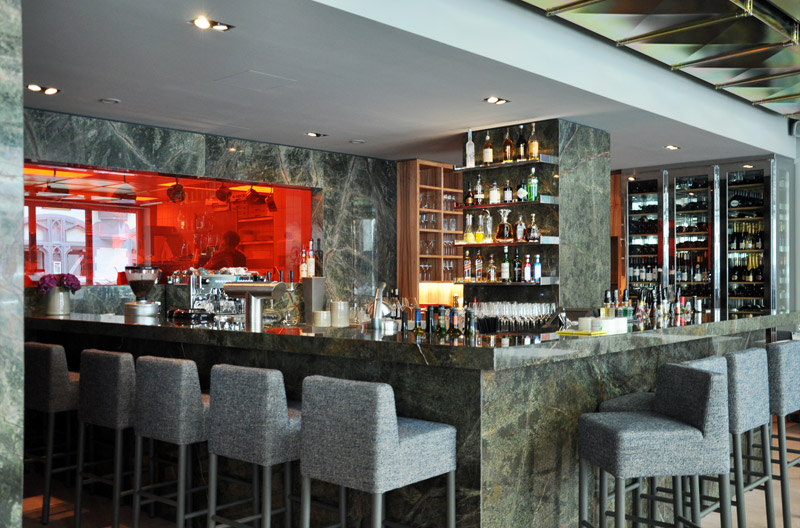