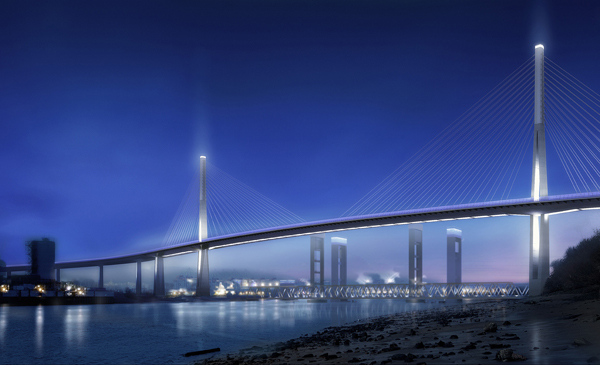 Hamburg keeps on planning: Back in 1991 a book came out entitled “Das ungebaute Hamburg” (the Hamburg that was never built), presenting “visions of a different city in the architectural proposals of the last 150 years”. Down through the decades there have been countless remarkable ideas and major architectural projects, memories of them abound. For example, the project by engineer and entrepreneur Eugen Langen in 1894, who wished to install a cableway in Hamburg and also link up the two sides of the Norderelber using a cableway instead of a ferry. The idea was a 45-meter-high piers and the system was intended to ferry 6,000 persons an hour back and forth between the residential districts on the northern bank to the industrial area in the port left of the Elbe. The representative stone reception buildings on both shores would have had a kind of suspension bridge rising up out of them, from which the ferry cabins would run out over the water. Instead of the cableway, in 1912 an overhead light railway was built, and instead of the cableway ferry, in 1911 the tunnel under the Elbe between St. Pauli and Steinwerder opened.

The plans to redesign the northern Elbe shoreline from 1937 onwards are notorious: they sought by means of an elevated road to forge an urban design link between Hamburg and the neighboring town of Altona, which had been brought inside the city limits. Moreover, a Gauforum complete with assembly hall, a Nazi party high-rise, and a bridge over the Elbe (ideas already abounded) were likewise on the drawing board. Architects and construction historians Hartmut Frank and Olaf Bartels reconstructed in “Das ungebaute Hamburg” how the Hamburg citizens crossed swords with the Berlin Nazi engineers and architects. Back then, the entire project was termed the “Gate to the World”. Hamburg believed that the redevelopment of the entire Elbe shoreline, and a competition for architectural proposals was held, would enable it as a metropolis to compete with New York. This vision was to be embedded symbolically and in monumental form in post-War Hamburg’s outskirts.

Hamburg architect Konstanty Gutschow, and he played a decisive role, went to the States on study trips and got a sense of the scale he wanted by viewing the bridges and high-rises there – and could have relied on the fact his projects had dictatorial clout behind them. Given the war effort, Gutschow’s proposals remained but that. In 2012 Sylvia Necker published a comprehensive contextualizing study of his life and times. Instead of building bridges, Germany exported war worldwide, only to import the bombing raids and fire-storms that devastated downtown Hamburg. As early as 1946 the weekly “Die Zeit” concluded that “the meaningless plans for a gigantic bridge over the Elbe were put to rest with defeat.”

Post-war reconstruction, economic growth and planning euphoria soon led to new visionary construction projects being proposed. Not all of them were consigned to the archives for later historians to unroll. The relocation of the port from the east of the city, where for a few years now Hafencity has been under development, west to the space now occupied by the massive container terminals started back in the 1970s. And with this came the introduction of new transport architecture that saw itself as the counter-project to the clumsy and bulky Gutschow proposals. The 3.5-kilometer-long Elbtunnel (1975) and the Köhlbrand Bridge commissioned in 1974 and of equal length (designed by an engineering team consisting of Paul Boué, Hans Wittfoth and architect Egon Jux) became Hamburg’s new landmarks. And they also stood for a technoid future vision of Germany, one that swiftly lost its aesthetic charm and clout with the Oil Crisis and the social change this sparked[JG1] . People started to question the meaning of large-scale infrastructure projects such as were long popular in Hamburg, ruled by the Social Democrats[JG2] . Since then, the impact such projects have on the local quality of life of the expansion of the port, energy supply systems and traffic routes is a matter of critical debate.

Possibly the city is busy at present writing a new chapter for a future edition of “Das ungebaute Hamburg”. For in the south of Hamburg, a district that since 1937 has ceased to belong to Prussia and has been part of the city, a strange transport project dating from the 1970s has never been really condemned to a drawer. Since then, year-in year-out, money has been spent on the planning for the highly dubious project. Since 1979 the city and the federal government have been planning a link road between the A1 and A7 interstates south of the Elbe – cutting right through town. Classified as the A26, the project is currently undergoing further development. Should the Federal Ministry of Transport include it in the “urgent requirements” section of the federal transportation routing plan, then the chances are the highway will be built.

Hamburg has just applied for this to happen. The stretch is 9.7 kilometers long, has lots of bends and sharp inclines. On completion the road will boast an 80 kmh speed limit. But before it can be built, given the specifics of the route, the sensitive nature reserves and residential areas it crosses, further detailed plans are necessary, and litigation with all parties concerned. While representatives of the Federal Ministry of Transport recently spoke of a “major gap that will be bridged”, transportation planner Hartmut Topp from Kaiserslautern, a member of the Board of trustees of the IBA International Construction Exhibition in Hamburg, has come out against the proposal. A highway “right through the heart of Hamburg won’t bridge a gap, it’ll be an urban disaster.” The renowned planner said back in 2010 that the recognized approach in transport planning is “not to run trans-regional autobahns through urban districts and not to close gaps in the autobahn network by routing them through areas already under great stress, such as Wilhelmsburg.”

Yet planning is merrily going ahead. While the route has been moved from the north of the Elbe island of Wilhelmsburg (declared an important development zone for Hamburg’s urban planning as part of the IBA) to the south, this “newly defined route” simply means that henceforth on or alongside the planned route there no other projects can be developed from – such as the residential construction the city so urgently requires. In mid-May, Frank Horch Hamburg’s Senator for Business and Transport who is an independent, presented the results of the realization competition for a new autobahn bridge to be constructed at some point in the distant future in the context of the A26.

A total of 12 European engineering and planning offices tabled designs for the new Süderelbe Bridge that will span the southern arm of the Elbe in the southwest of the island of Wilhelmsburg. The jury of experts unanimously chose a design by a Danish-German engineering JV formed by Stuttgart’s Schlaich Bergermann Partner, Hamburg’s WTM Engineers, , and Copenhagen’s Dissing + Weitling. The proposal is for an integral cable-stayed bridge with a main 350-meter span across the Süderelbe. It references the Köhlbrand Bridge with the symmetrical layout of two pylons, without, and this the jury commended, duplicating the latter’s geometry. “Across a length of 392 meter, the stiffening girder will be formed from two separate hollow boxes for the deck for the lanes in both directions,” explains the jury, “connected at regular intervals by cross-struts to create a seamless band of light.” The “slenderness of the girder” and its “split through to the foreshore bridges”, protecting the edifice from “some unpleasant monumental feel.”

The commercial estates look like a mix of “wasteland and high-tech”, wrote Hamburg art historian and conservator Hermann Hipp, describing the district where the future bridge will stand. The location is a bottleneck for the port railroad and heavy-goods vehicles, with refineries and the controversial coal-fired Moorburg power station (due to go turnkey in 2014) in the immediate vicinity. In the shadow of the future autobahn bridge stands the Kattwyk Bridge; Germany’s largest lifting bridge, it handles cars, trucks or freight trains when its movable central section has not been raised 46 meters skywards to enable the passage of large ships. Commissioned in 1973, the bridge is to be supplemented by a second version, purpose-built for rail traffic only (engineering JV of Leonhardt, Andrä und Partner, Sellhorn Ingenieurgesellschaft and Ingenieurbüro Vössing). Planning approval has already been given for the structure, but the financing is not yet in place. Already under construction further north is the new Rethe bascule bridge (engineering JV of IB Grassl, Sellhorn Ingenieurgesellschaft and architect Bernhard Winking), that will soon replace the lifting bridge of the same name, which dates from 1934.

However glorious and audacious the Danish-German autobahn bridge proposal may seem on the renderings, possibly it will simply become another “melancholy paper tiger” as Fritz Schumacher termed unrealized planners’ dreams back in 1929.

all competition submissions will be on show:
from July 2-27 at the Elbcampus Hamburg-Harburg,
from August 14-27 at the gallery of Handwerkskammer Hamburg 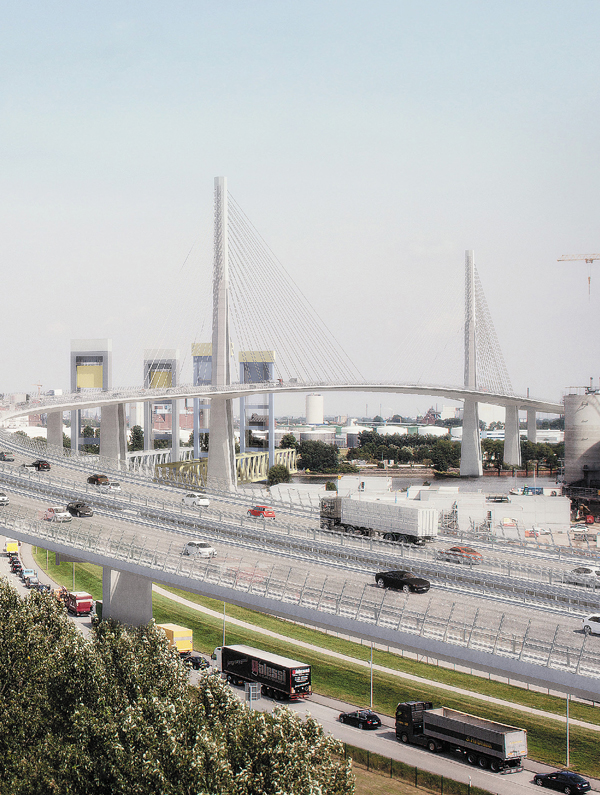 The bridge is already designed, but if the project „City Highway Hamburg A 27” will really realized is not decided yet. Photo © Ingenieurgemeinschaft sbp - WTM - D+W 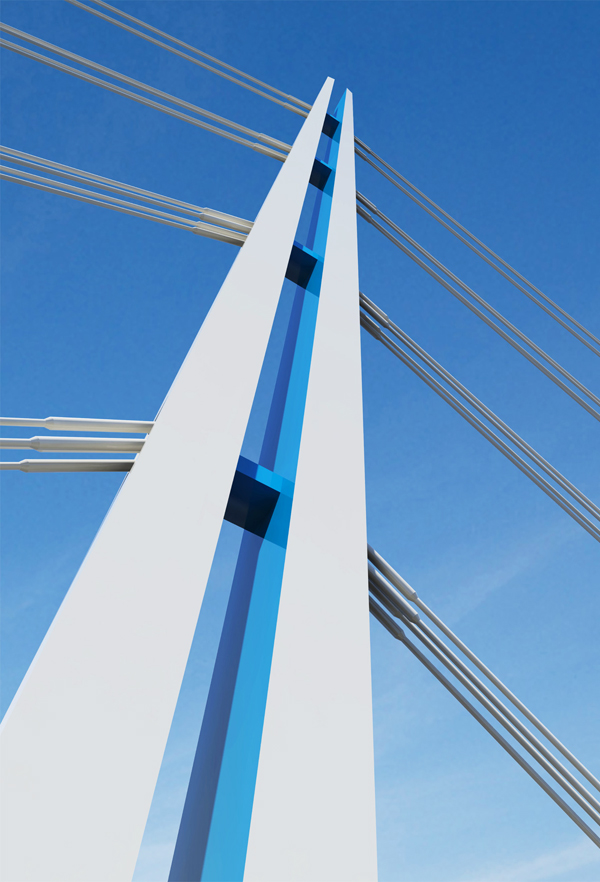 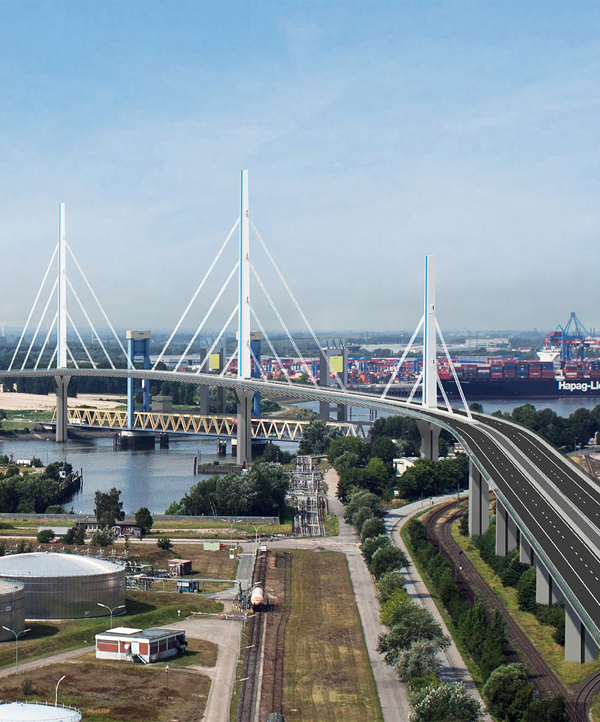 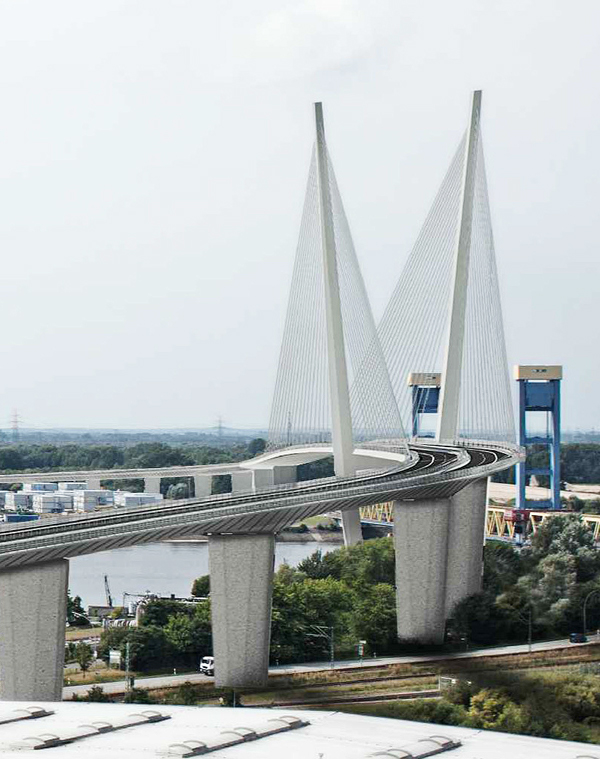 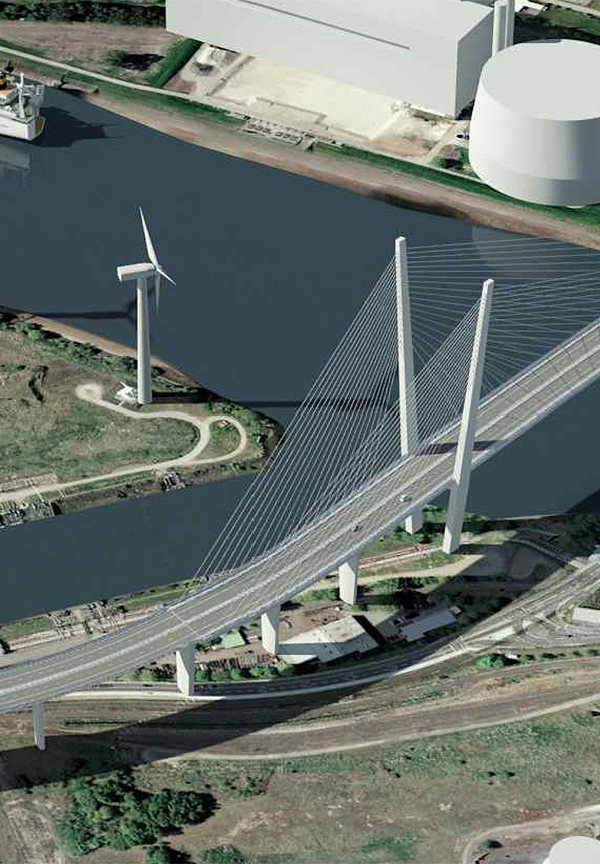 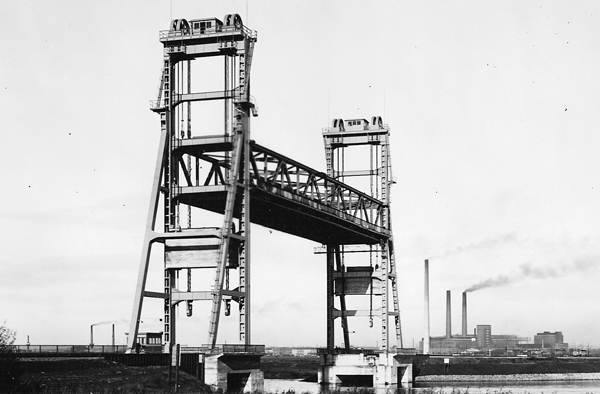 Already in construction: the Rethe flapbridge from 1934. 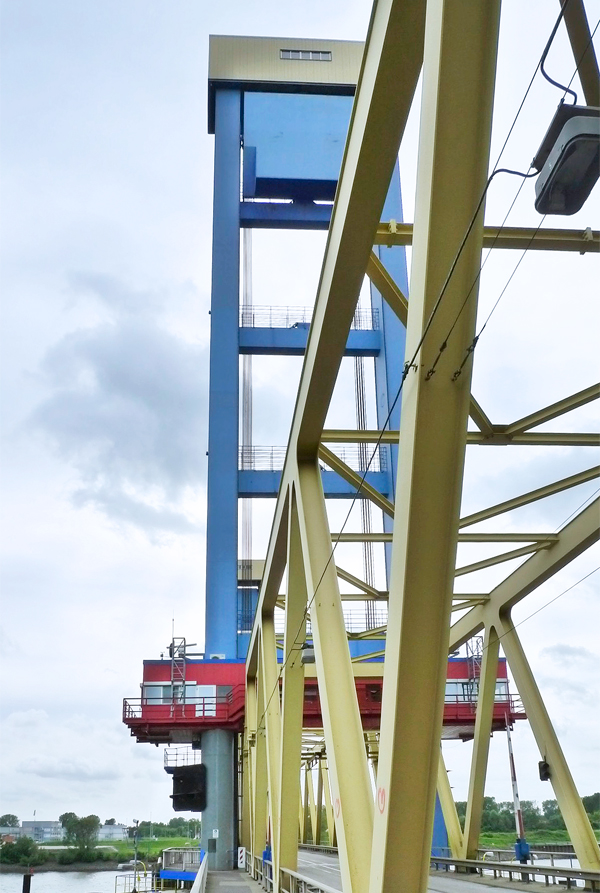