top
Buffaloes in the Swiss underground
by Adeline Seidel | Nov 4, 2014 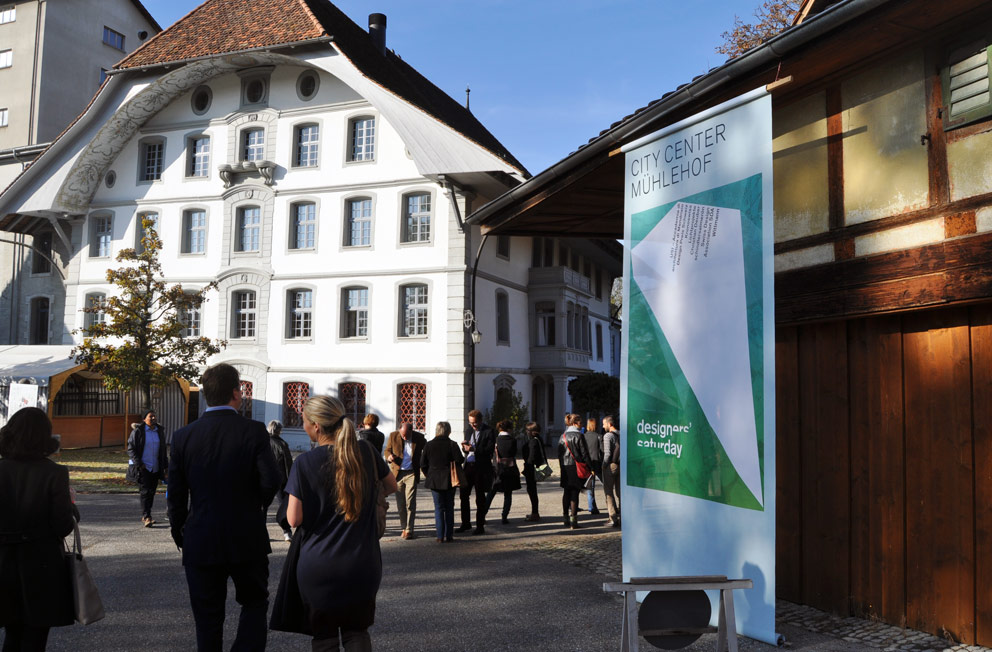 On the first weekend in November, thousands of visitors flocked to the 15th Designers’ Saturday in Langenthal, Switzerland; it’s a leisurely kind of place between Basel and Bern, and yet also a design hotspot, as Création Baumann, Hector Egger Holzbau, Glas Trösch, Girsberger and Ruckstuhl are all based here, along with their production facilities. And all of them open their doors to the general public for the festival. The event is so attractive because it is so clearly not a trade fair, as the manufacturers don’t just show products, they stage them, fostering dialog between the finished articles and the corporate premises and production halls. Or so the idea would have it.

At this year’s Designers’ Saturday, which is a biannual event, a total of over 70 manufacturers, colleges and designers presented their output at nine different venues in Langenthal. What was amazing was that only just under a quarter of them opted for site-specific settings. Only too often, the presentations by the manufacturers and colleges resembled straightforward and at best truly uninspired trade fair displays. Evidently there’s greater commercial pressure on the manufacturers to use the platform more strongly for sales then to swap ideas with outside minds from the worlds of design, art and architecture and try out new ideas and concepts. Nevertheless, thankfully there were still enough of precisely those installations that so appeal to the crowds in Langenthal – and the quality of which was therefore all the more apparent. 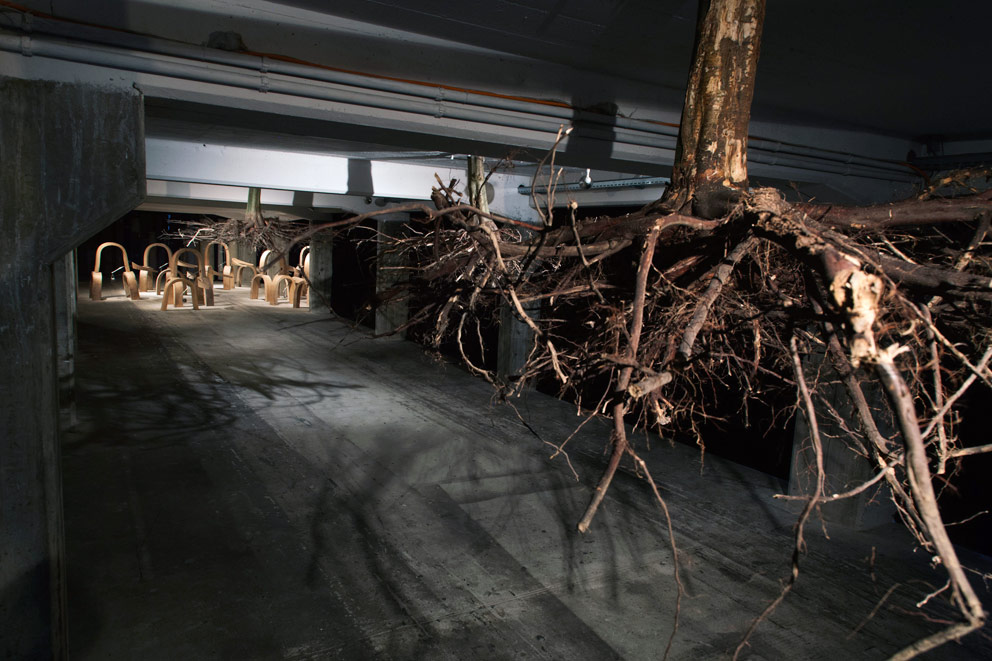 Studio Hannes Wettstein came up with not one but three highly appealing installations. For Horgenglarus they transformed the Ruckstuhl cellars into a cave through which white mist oozed and where tree roots grew downwards from the ceiling; it was like being in some gnome’s paradise. In the hazy light, you could hear the distant sound of bells: A herd of buffaloes, made up of wooden elements from Horgenglarus objects, such as the “Klio” chair (by Studio Hannes Wettstein) were nodding their heads while grazing at one end of the cave. A peaceful and mystical scene. 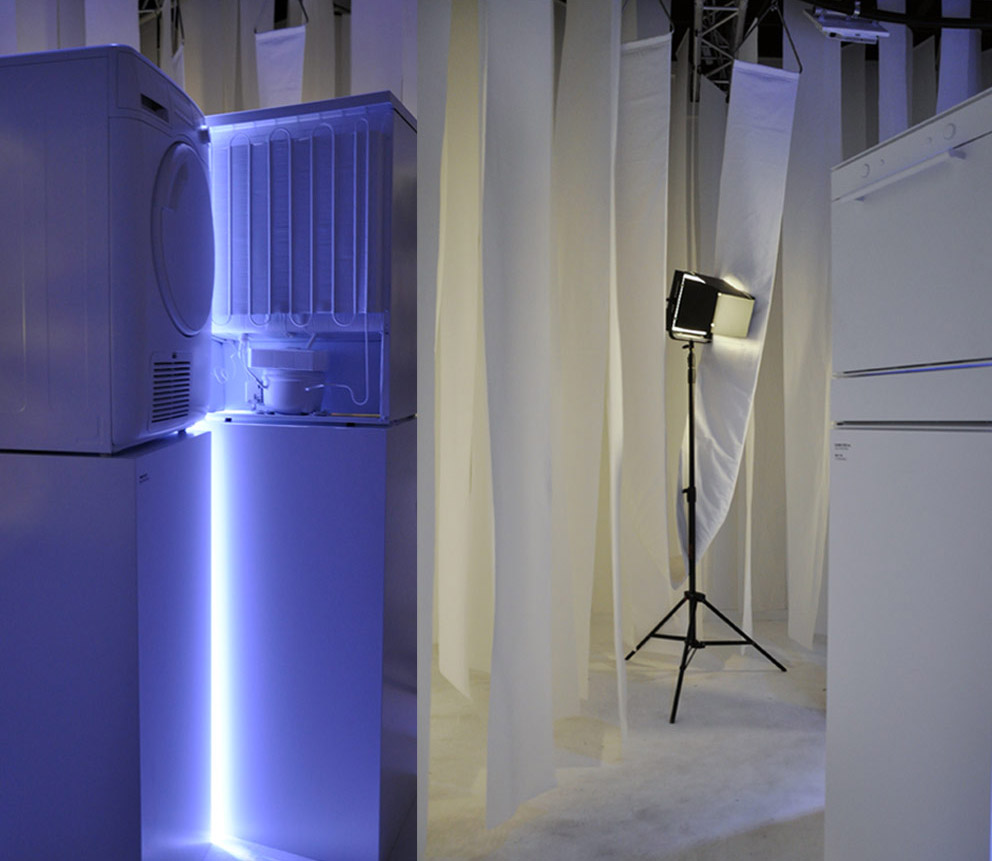 For Bauwerk Parkett Studio Hannes Wettstein turned parquet flooring into bird mobiles that flew into the sunset. And for surprise guest Bauknecht, the Swiss designers devised a white cube in which the washing machines, dryers and fridges were bathed in black light and in which visitors could swing back and forth between and on strips of cloth by way of hammocks. It may seem unusual that such a manufacturer seeks to ally itself with design, but a change of strategy is in the offing at Bauknecht: The white wares will soon be available in matt black and with a new fan-belt technology, making them quiet and attractive for well-designed living spaces. 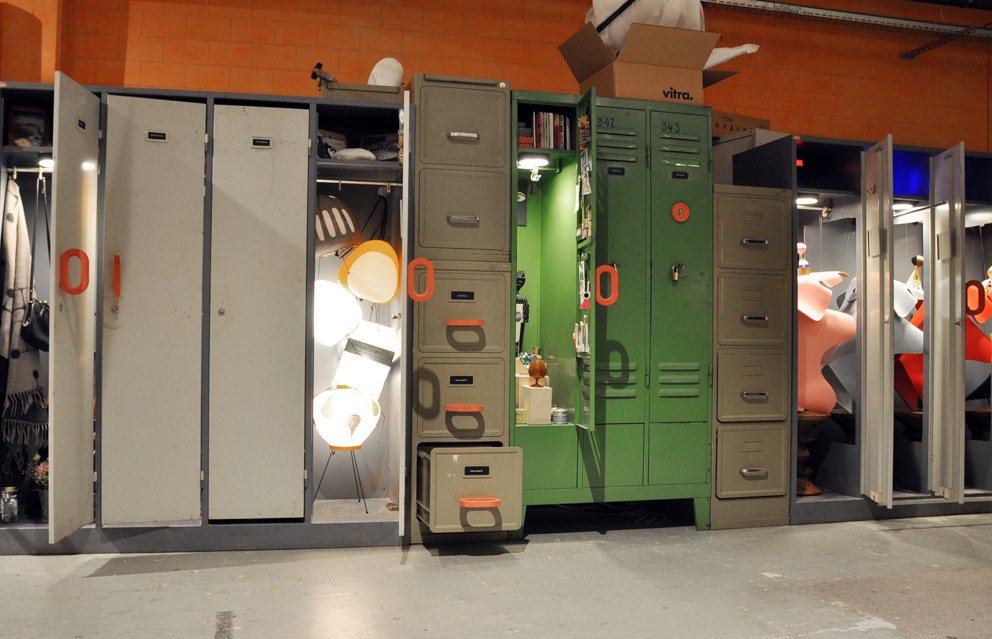 And Vitra was another surprise, with a presentation called “Out of the box” created with Joelle Aeschlimann and Sylvain Aebischer, both graduates of Ecole Cantonale d'art de Lausanne (ECAL): In disused lockers and filing cabinets Aeschlimann and Aebischer offer any number of dioramas of design classics and designers. 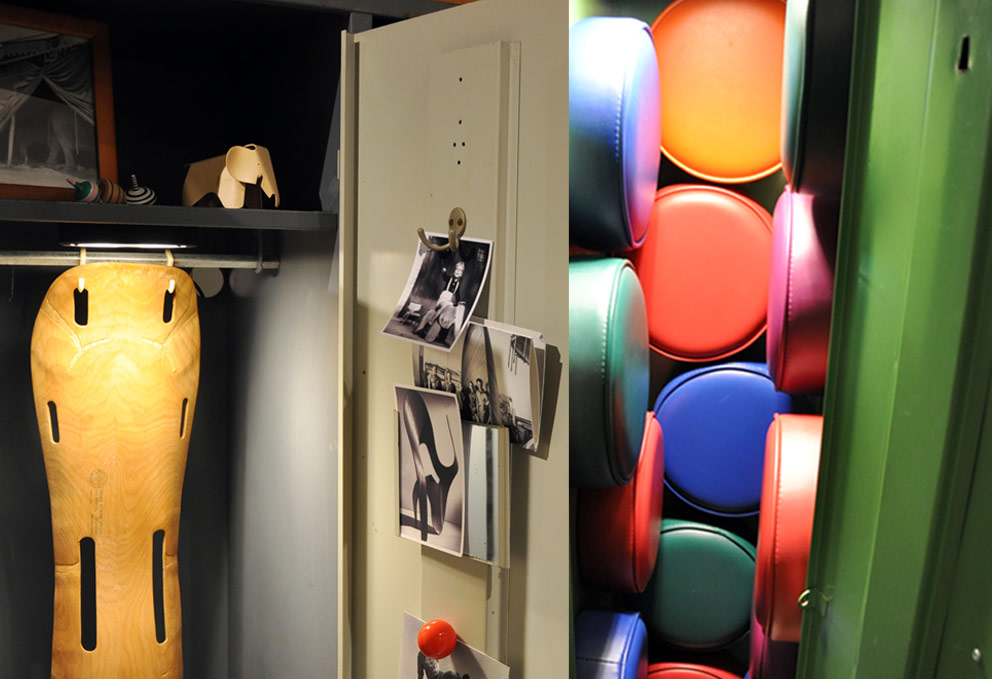 Behind each door is a surprise. Photo © Adeline Seidel, Stylepark

In the drawers there were the balls from Eames’s “Hang it all” clothes hooks, in the lockers wooden dolls by Alexander Girard dancing, and a filing cabinet contained historical images of designers like Charles Eames. Whatever door or drawer you or opened, you came upon some other historical item from the Vitra world. 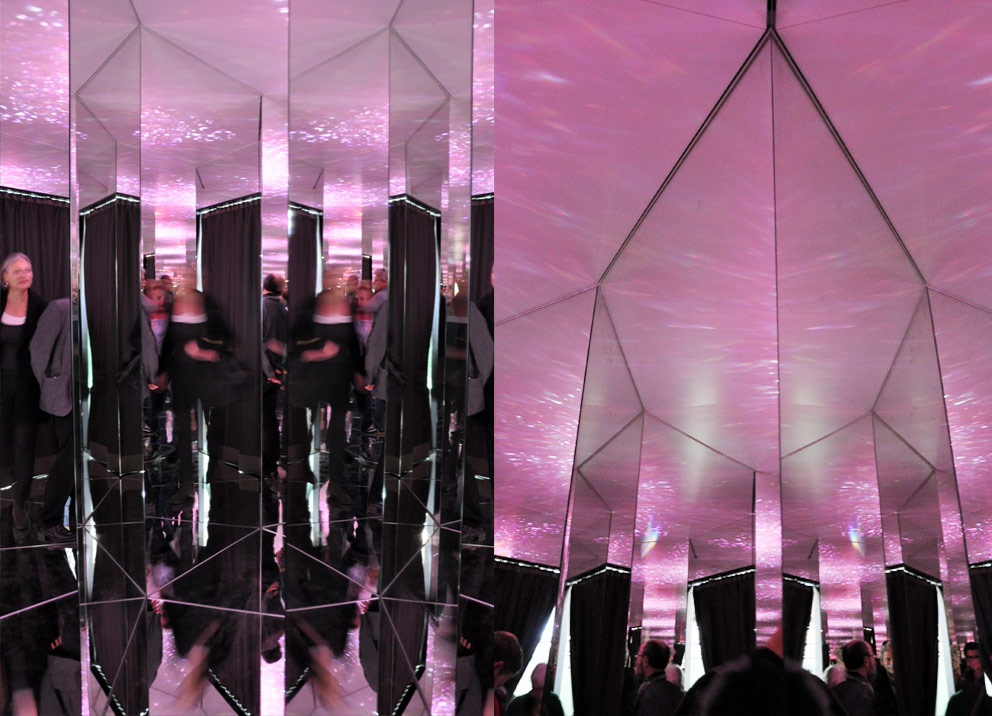 It was amazing that precisely makers of technical products and processes willingly embarked on more abstract sets. For example, there was the walkthrough kaleidoscope carousel by Iria Degen for Galvolux, the Swiss glass and mirror manufacturers which has joined forces with Création Baumann to offer security glass permeated with fabrics by the Langenthal-based company. On stepping out of the completely mirror-clad carousel you may have felt a bit dizzy, but nevertheless livened by the installation’s colors and lights. 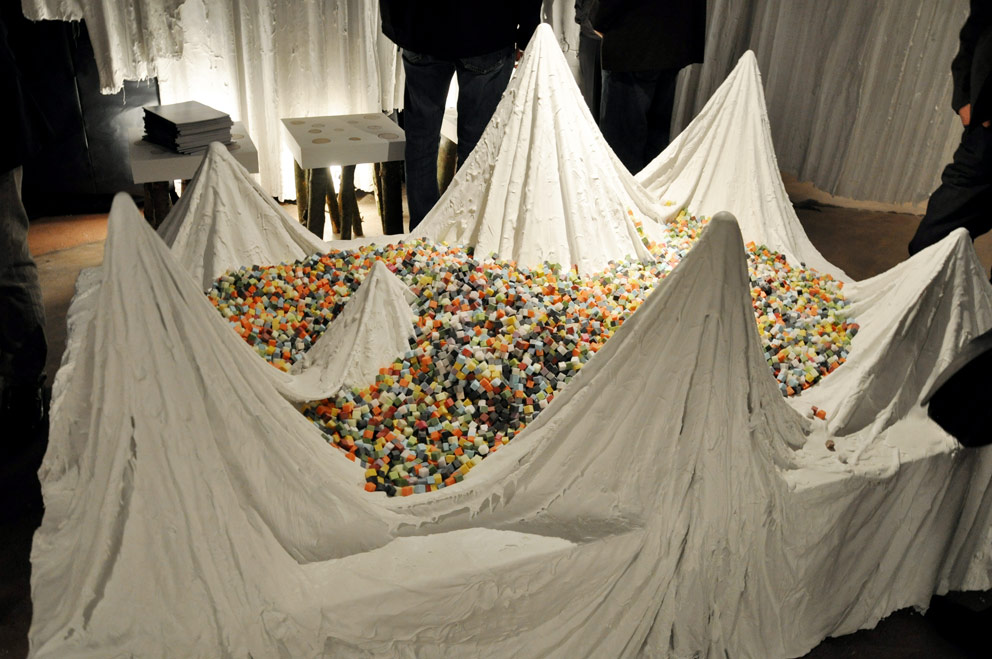 Hasenkopf presented its new technology in Langenthal: It can now cast acrylic-bonded mineral materials. To this end, it dipped the curtains in the liquid mineral material, gathered them in and then let them dry, creating a rigid forest of curtains, behind which a variety of products awaited the visitor. 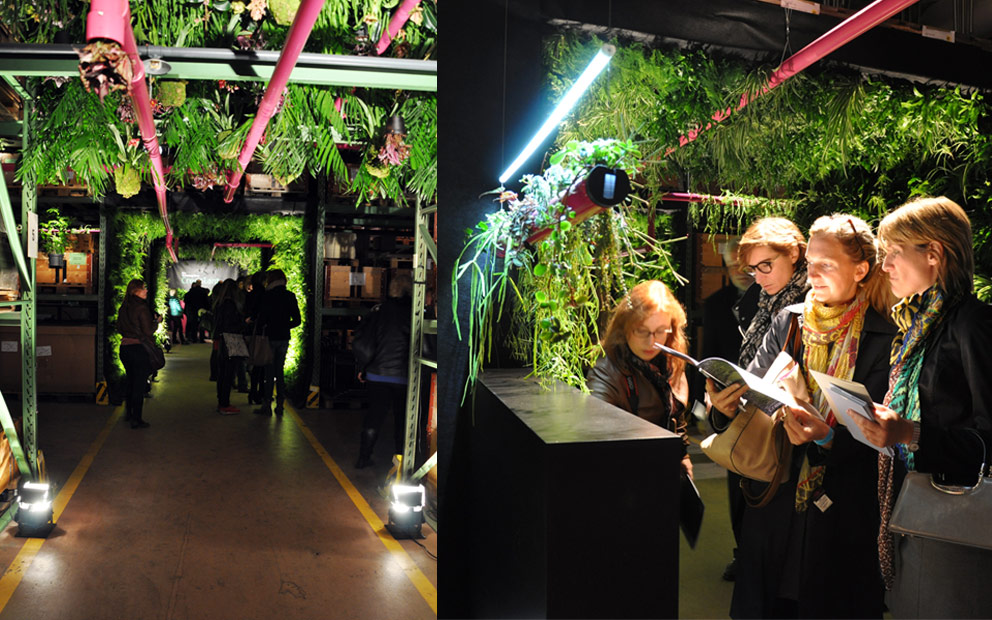 Creaplant teamed up with the architects at Herbert Bruhin to turn the Girsberger warehouse into hanging gardens. Because that is what the group led by company founder Michel Aebi really does best as “interior greening specialists”. It has little in common with potted plants, as here knowledge and craftsmanship combine to create green spaces that become part of the architecture. 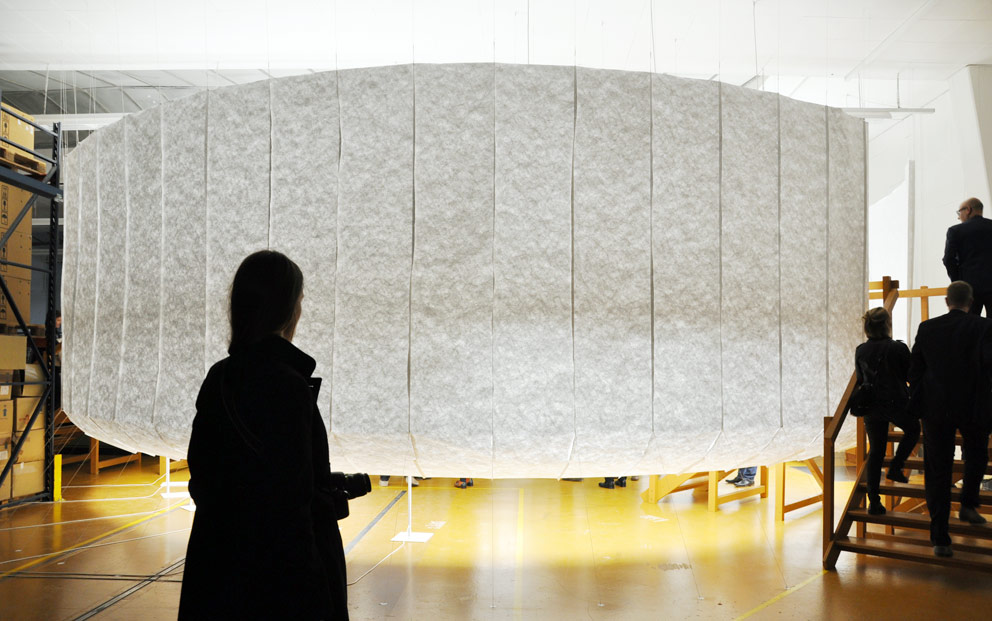 In what resembles artificial nature, Sattler suspended its LED ring luminaires and Ligalicht staged its luminaires as crystals hanging above a burbling brook-cum-basin – like those that in the movie are used to predict the future. Jörg Boner developed an installation for Schätti luminaires by using Tyvek nonwoven partitions to make a circular area in the Création Baumann factory halls. Within this glowing cloud, Schätti presented the precise luminaires by Boner – a joyful contrast in juxtaposition to Création Baumann’s massive machinery. 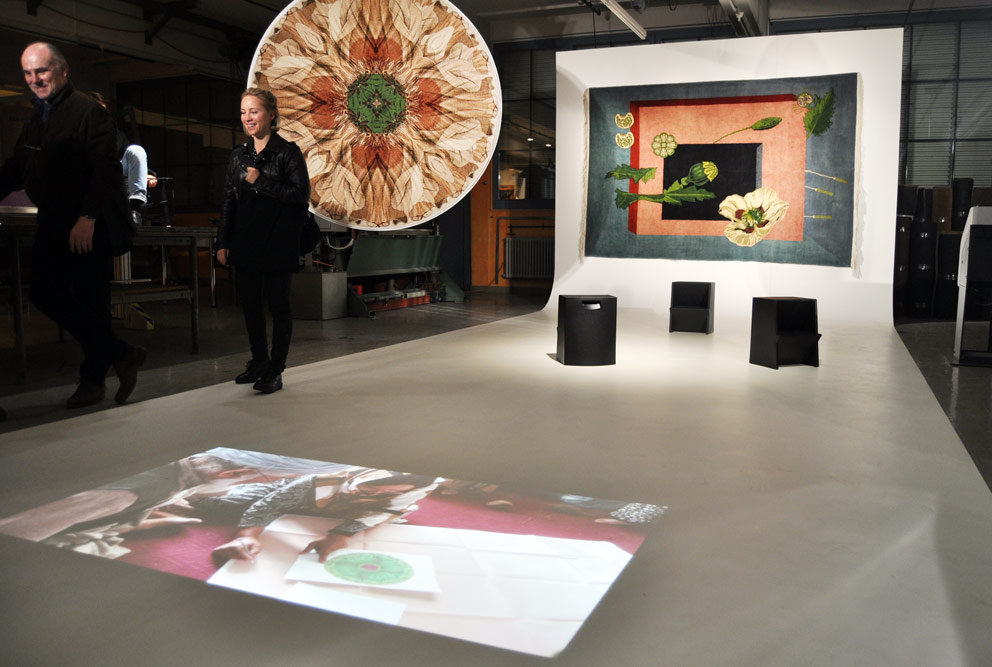 Plants also played a special role in Richard Lampert’s installation: The blooms, leaves and stamen of opium poppies are to be seen on a rectangular carpet; two round carpets depict in abstract form the inner life of the blossoms. The presentation not only alludes to the fact the company is launching a new product line, but also to an exciting story, as the carpets come from Afghanistan. For many Afghan farmers, planting opium poppies for illegal purposes is the only way to keep bread on the table. By contrast, the traditional craft of knotting carpets could be a lucrative and legal source of income. However, the requisite infrastructure is still lacking, the dealers, the craftsmen and the forwarding agents. Karin Struck, who works as a mediator in Afghanistan, joined Richard Lampert and designer Alexander Seifried (he created the carpet patterns) to initiate a project to put that infrastructure in place. Much patience and effort was required but Lampert, Struck and Seifried have succeeded, making one want to sit down on the carpets and listen to their tales. 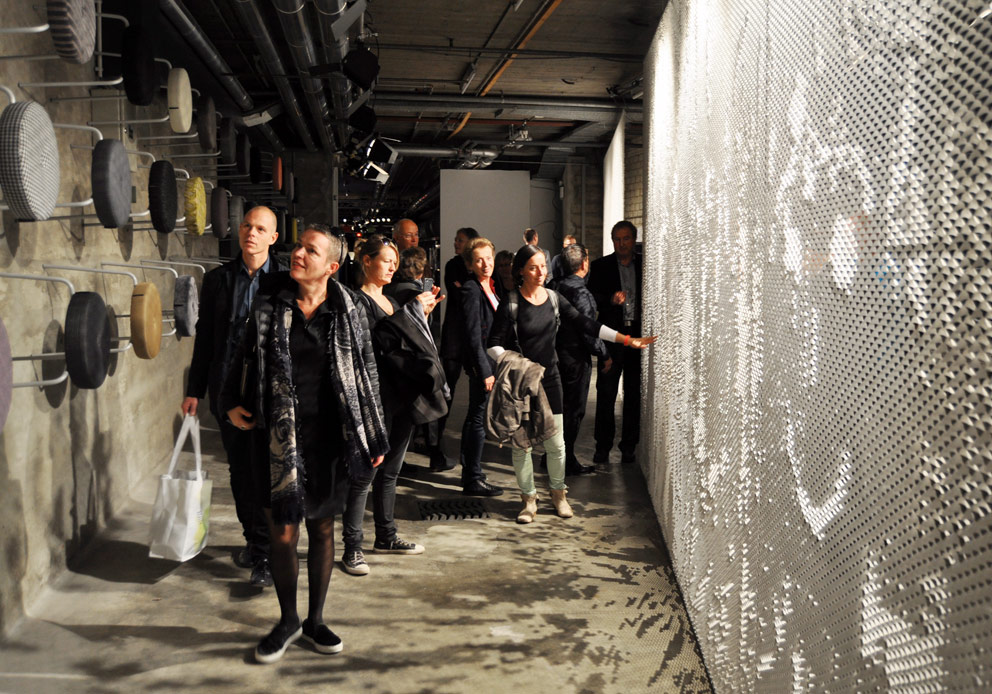 But how did the manufacturers present their own wares over and above making their halls available for Designers’ Saturday? Création Baumann opted for a shadow play for all the senses in the form of “Reverso”, a curtain partition made of Tyvek and the brainchild of young Swiss designer Yann Mathys, whereby the shadows arise why you stroke the material. Together with Mathys, Création Baumann will be readying the filigree wall for the market and will develop three different versions – even if they are not made of customary textile. 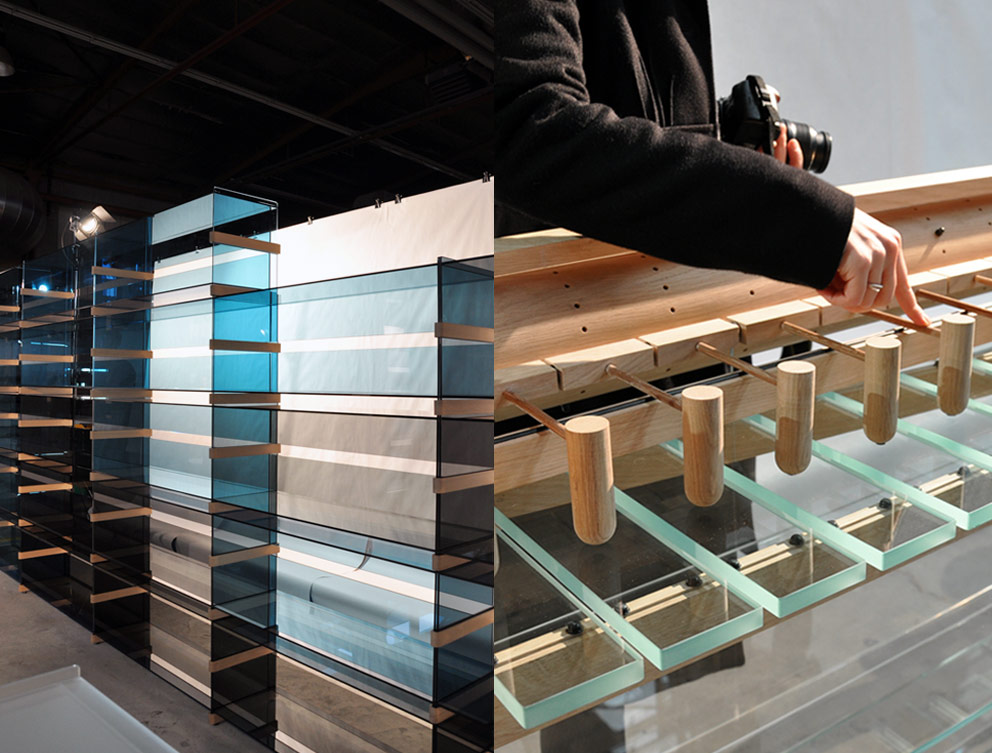 By contrast, at Glas Trösch you could play music on glass xylophones. The instruments were framed by the “Pile” shelving system developed by Swiss designer Moritz Schmid for Glas Trösch and made of dyed glass, with the shelves held in place by filigree wooden elements. Meaning the shelves seem to float, so light and transparent are they. 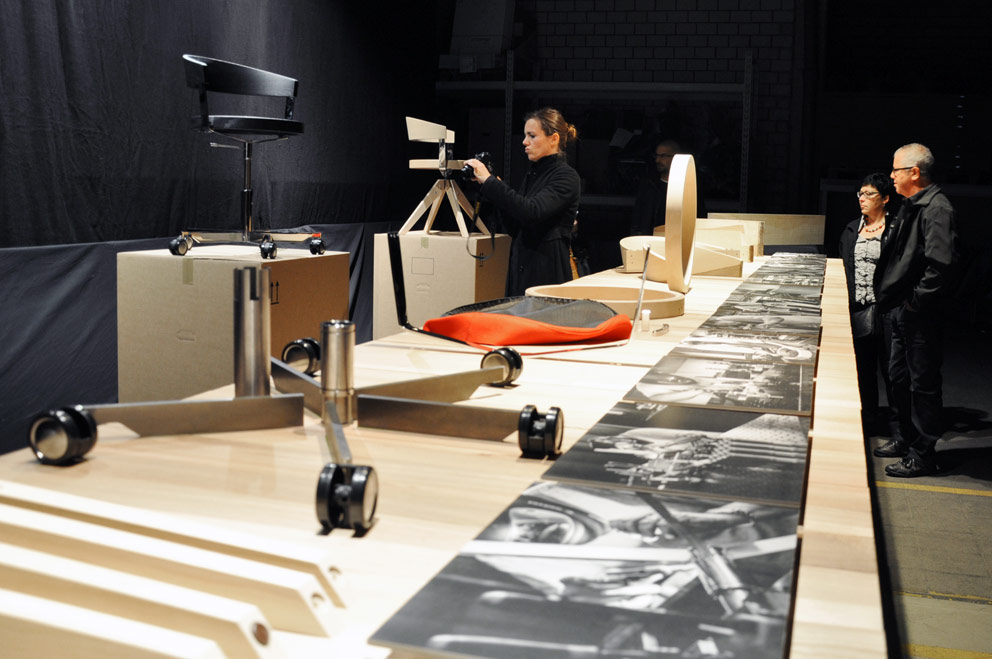 Girsberger devoted a great deal of effort to the guidance system: Made of blister foil, large triangles showed the direction to follow and led you safely through the halls. And emphasizing its expertise in wood, along the way Girsberger presented various different types of wood. While this initially seemed a bit teachy, along the way you invariably found your curiosity kindled when touching and feeling the different grains. 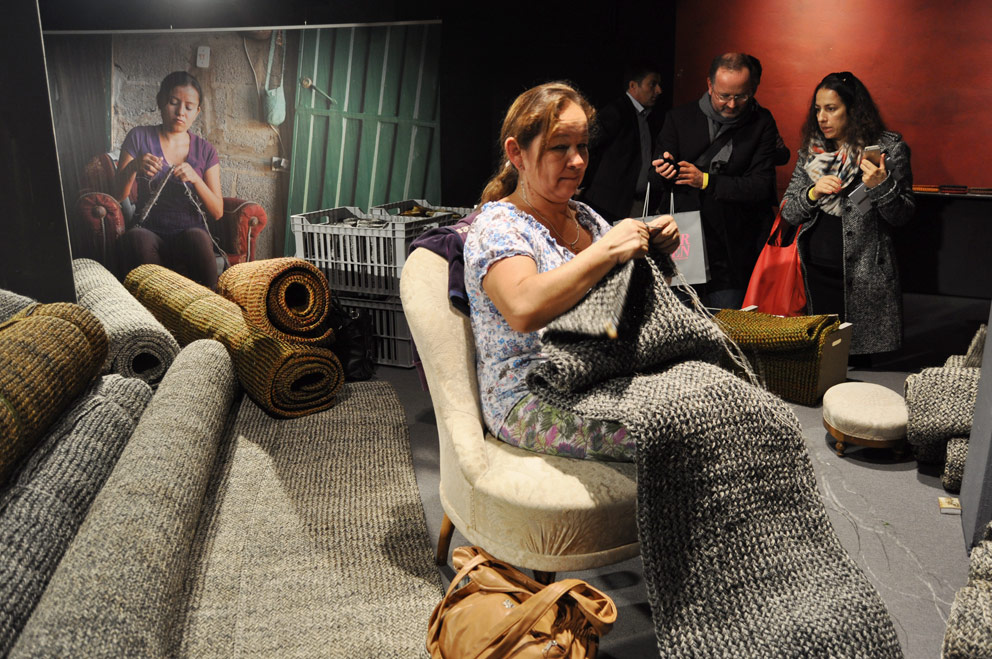 Ruckstuhl flew in a Colombian knitter specially, and showed just how speedy craftsmanship can be. The woman knitted strips for the “Maglia” carpet at breakneck speed, leaving all the amateur knitters present gob-smacked. Not to mention the “Maglia” story: it’s made from a natural Colombian fiber called fique. The fiber is generally used for coffee sacks and agricultural products, but now, in collaboration with a knitting workshop, are being spun by hand and then knitted to make carpets using large needles.

Even if this Designers’ Saturday was more commercial than its predecessors, the tour offered many an inspiration and change of perspective from the customary take on design. The mood was leisurely and there were a lot of trade visitors, architects, designers and interior outfitters, alongside the Swiss design cognoscente and of course the inhabitants of Langenthal, who enjoyed wandering round the spaces, on the lookout for special attractions. There awaiting all at the end were plenty of delicacies for the taste-buds. The audience’s prize went to the Colombian knitter. No surprise there; despite her long fingernails she still didn’t drop a stitch while working at express speed, beautifully expressing the contrast between machine and hanbdicrafts. Jörg Boner’s installation for Schätti Leuchten was showered in gold, or rather won the Designers’ Saturday Gold Award. Silver went to Studio Hannes Wettstein and Horgenglarus for the buffaloes in underground Switzerland, as it did to Axor for its soap bubble presentation at Girsberger. 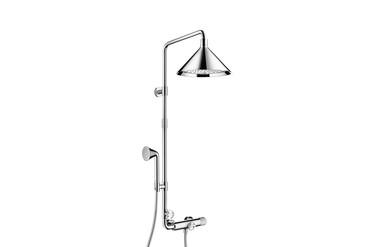 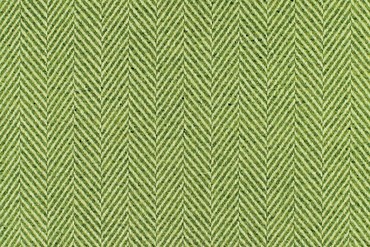 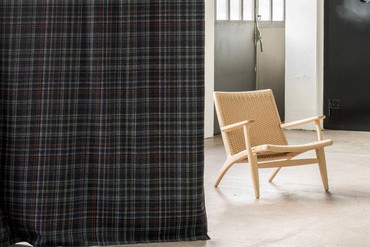 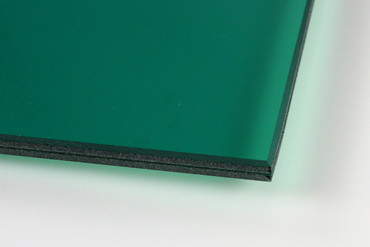 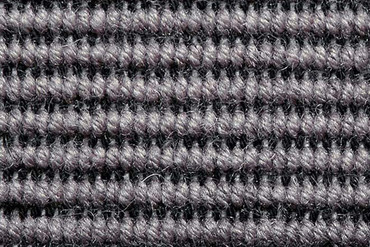 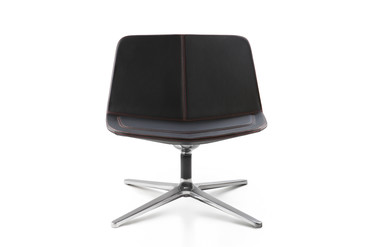 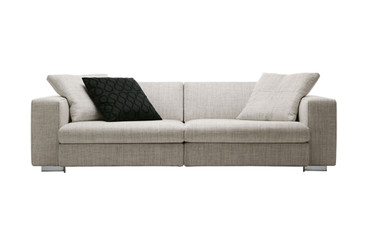 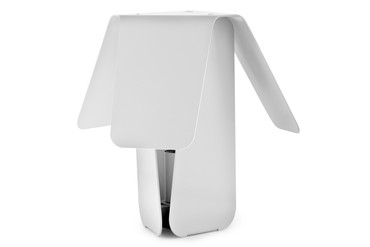 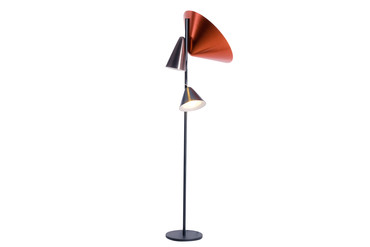 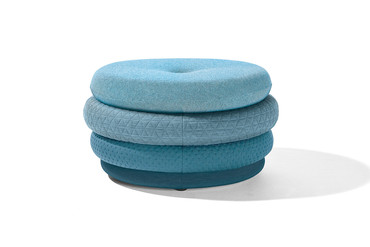 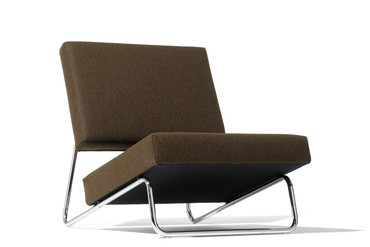 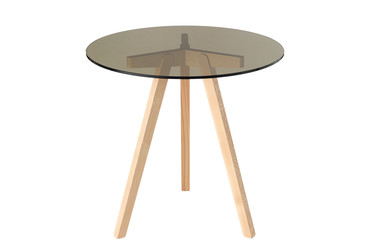 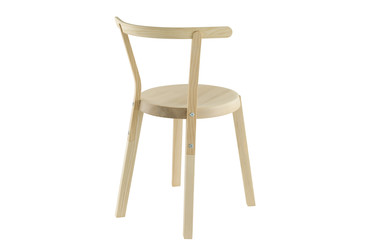