The “Quadrocopter” zooms high up into the air; it’s aiming for 600 meters, where the last of 1,500 prefabricated living modules will slot into place. Building in new realms, using new methods and simple shapes – this is how the team of architects made up of Fabio Gramazio, Mathias Kohler and Raffaello D’Andrea envisage “flight assembled architecture” to be. The fundamental idea within this concept is that (living) spaces can be modularized, ergo divided up/ into elementary units. These modules can then be standardized, fitted with various functions and implemented in a variety of ways. And so, with a little imagination, this generates a generalized system of building blocks that simplifies the planning and construction process. And now the “Architekturteilchen” exhibition in Cologne’s Museum of Applied Art has set out to show that while the concept of modularization may be en mode right now, it isn’t as new as it seems.

Back in the early 1940’s, Walter Gropius and Konrad Wachsmann came up with a concept for a wooden house that could be assembled from simple standardized elements with ease – the “packaged house system”. Five untrained workers were all that was needed to put the house together, and that in just nine hours. Although the concept was systematic in its approach, as well as being accomplished both formally and technically, the “packaged house system” was never an economic success and production was discontinued in 1952. Experience shows that such new approaches require perfect timing for market success; prefabricated housing systems have after all done significantly better on the market over the past decades.

During this time, takes on modular construction fell in fertile soil, even in Germany. Peter Hübner and Frank Huster for example were commissioned to design 110 temporary room elements for the Olympic Games in 1972. The outcome was the “Casanova” room capsule, an octagonal polyhedron 3.6 meters in size. The walls were made of corrugated cardboard covered with a layer of fiberglass-reinforced plastic. “Casanova” room capsules were later implemented as individual elements for private properties. “The houses arrive in the morning and you can move in in the evening,” was Peter Hübner’s personal guarantee, and he wasn’t lying: After construction had begun in the morning people really were able to throw their house-warming parties that very same evening.

The “Nagakin Capsule Tower” in Toyko in 1972 is a decidedly famous example. Architect Kisho Kurakawa was the brain behind this 13-storey building in the upper-class area of Ginza made up of 140 prefabricated room capsules. The modules’ conceptual clarity and attractive design have not diminished to this day, though the design did not succeed in becoming a blueprint for further constructions. In contrast to its own concept of the repeated use of simple elements, modular architecture appears to function in a more exemplary way. Considerations of this aspect seem to have been omitted from the exhibition, however.

The examples used in the exhibition are represented in form of photos, sketches and models. In keeping with the topic at hand, the exhibition architecture is modular too. Plastic polyhedral elements mark out each individual exhibit and provide space for accompanying information and descriptions. In addition to presenting numerous examples of modular construction, including more recent examples such as Jürgen Mayer H.’s “Metropol Parasol” in Seville and Hybrid Space Lab’s “Do-It-Yourself Pavilion” designed for the Architecture Biennale in Shenzhen, the Cologne exhibition also draws our attention to the materials and production methods used; one vivid example being the “Crystal Mesh” a media façade that is made up of 6,069 plastic modules and can be animated using video footage. The piece was developed by Berlin-based realities:united for use in WOHA Architects’ “Urban Entertainment Center” in Singapore.

Since the theme of “modular construction” is considered from a variety of angles and in varying depth, the exhibition remains accessible for the broad industry public and the layman with an interest in architecture alike. Experts on the other hand may already be familiar with some of the examples and associations. It must be noted that the exhibition did lack a publication to accompany the opening; this is apparently still in the pipeline. 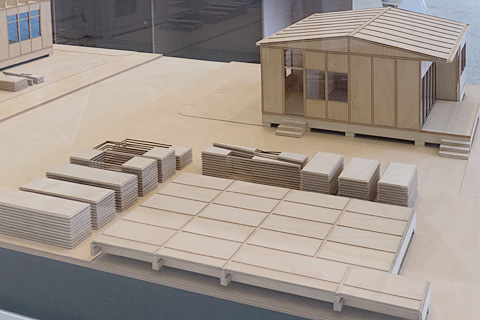 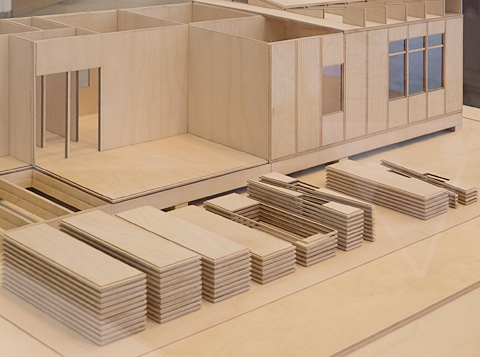 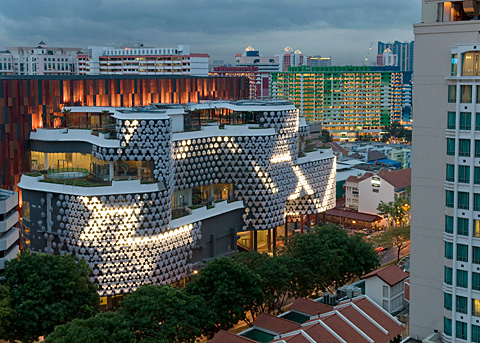 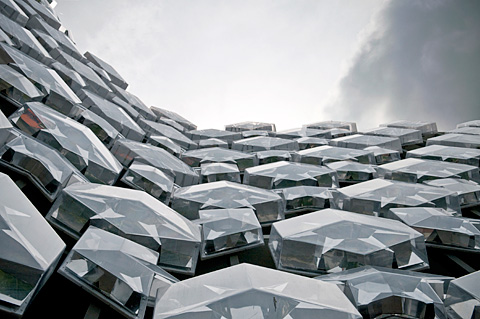 ”Crystal Mesh”, a media façade that is made up of 6,069 plastic modules © photo © realities:united 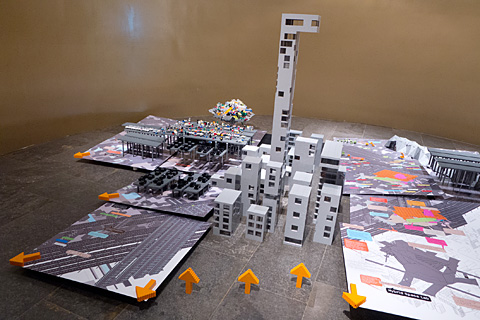 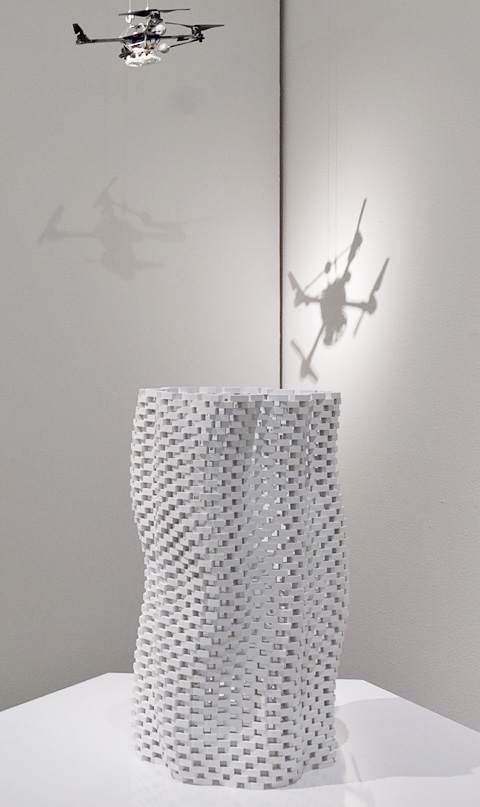 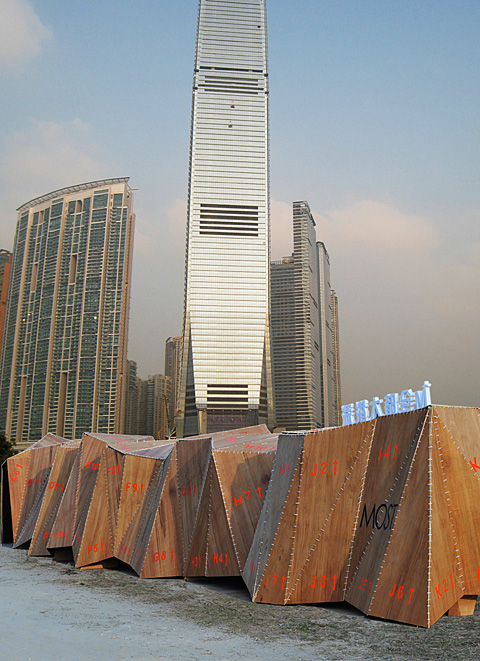 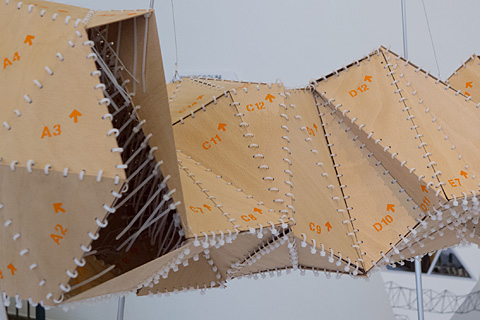 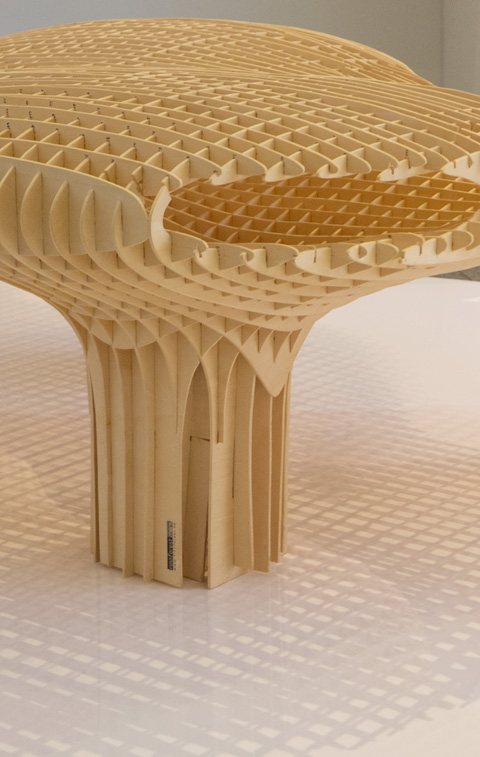 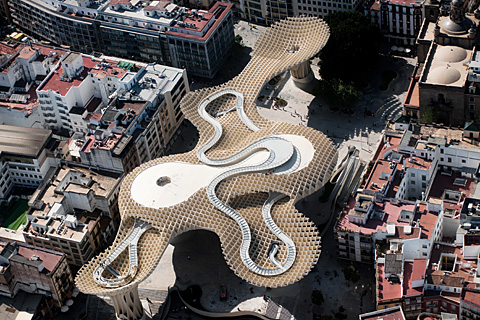 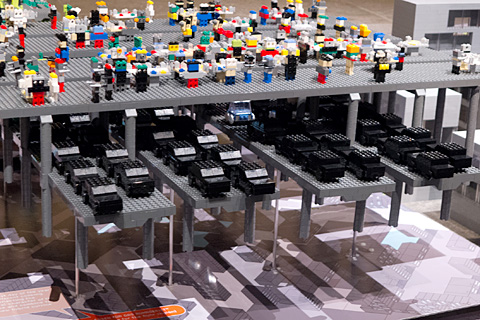