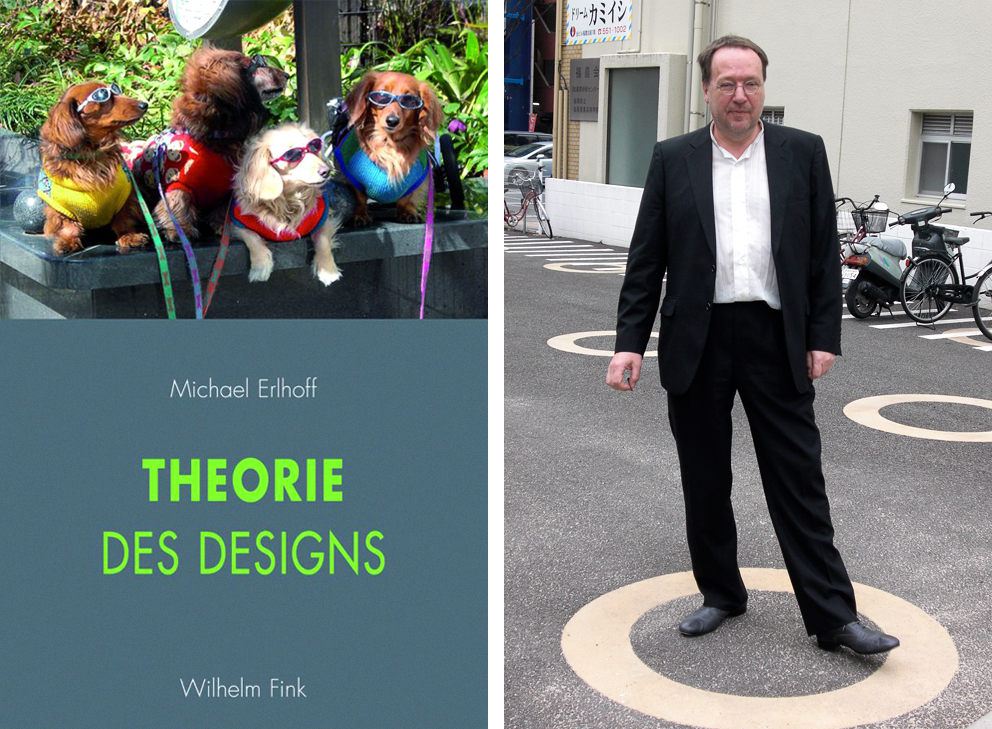 Focus on the process of knowledge through and with design - Cover "Theorie des Designs" and its author Michael Erlhoff. Photo © Wilhelm Fink Verlag/ Michael Erlhoff

The dilemma so many books on design face is that they look oh-so-topical when they first come out, and then swiftly seem awfully out of date. Books on design often address the latest products, the newest types of graphics, and leading-edge corporate or material strategies. But in a world moving at an ever faster pace, what’s a new shape today may be an old shape tomorrow; and what is presented between book covers may soon no longer be historical testimony but simply waste paper. Most design books tend to center around snapshots and self-referentiality, rather than categorization, experience and ideas that connect up the dots.

Neither a design that willingly acts to realize the brief set by marketing nor a design that is happy to remain in the DIY-domain of the “makers” scene require theory. At best instructions for use. By contrast, Michael Erlhoff’s “Theorie des Designs” refuses to either justify or admonish a practice that believes it can get by without theoretical elaboration.

The book is aimed less at design-scene practitioners, cognoscenti or actors, and more at the general public. Anyone who mistrusts the rumor that design is identical with fashion or a certain form of art that seeks visibility and to appeal will benefit from reading this book. Assuming that they are willing to contend with a style of language that insists on being special and idiosyncratic. It’s not that foreign words or even footnotes (there are none whatsoever) might impede the flow of things; rather, Erlhoff uses words and ways of writing that are certainly one remove from the vernacular or customary written language today. So anyone expecting a picture book or at least an illustrated book will be disappointed. And likewise anyone who believes a text that refers to theory and elaborates on theoretical issues of design should have notes, footnotes and an extensive scholarly bibliography, should not buy this volume.

Plea for the quality of the surface

What Michael Erlhoff presents over the 214 pages is definitely not instructions on how to make better designs or how to make design better. At least not primarily. The focus is instead on the process of knowledge through and with design, on a changed view of realities.

Michael Erlhoff gained his Ph.D. with a dissertation on Raoul Hausmann supervised by literary scholar Hans Mayer in Hanover, was a member of the Advisory Council of Documenta 8, where he presented design. In 1987, he played a key role in the exhibition “ulm … die Moral der Gegenstände”, which offered a new view of the beginnings, contexts and political intentions of the Ulm Hochschule für Gestaltung. From 1987 to 1990 he was director of the German Design Council and in 1991 founding dean of the “Cologne International School of Design”, the new design course he set up at the Cologne University of the Applied Sciences. Recently he was made professor emeritus in Cologne. Under not completely amicable circumstances, if one considers his great efforts on behalf of the Cologne school, which attracted criticism at an early date but also laid the foundations for its international reputation.

With “Theorie des Designs” Erlhoff essentially presents a summation of his output to date as a publicist, organizer, project initiator, pugnacious discussant and teacher. Erlhoff’s companions in arms and students will have been long familiar with many of the statements and stories. For example the one about the museum audience who don’t like it “if during a guided tour through an exhibition you simply tell them about the size of the pictures on show or describe the frames.” That goes back to a real occurrence when Erlhoff was still a student and part-timing in a museum. When asked what was behind the pictures he replied: “The wall.” And the anecdote is now inserted into a “plea for the quality of the surface”.

Confuse, criticize, and relate to reality

Fear not: The result is not some heavy tome that weighs things down, some inaccessible magnum opus. Erlhoff takes a very leisurely time developing his view of the world, eschews a clear stack of dogmas, and for all the clearly personal background offers far more than a personal view of things. Nevertheless he names the main chapters in line with how a traditional German townhouse stacks up: “Basement”, “Souterrain”, “Parterre”, “Hochparterre”, “Bel Étage”, then skips a few floors and ends up in the “Mansarde” under the roof. It is a very readable text, argued with zestful ease, and he reminds us at the outset that “a design is always first realized when used” and thus depends on “people being able to handle the designed things, signs, concepts or processes”, “relating them to reality”. Later we read that “a key task of design and design research is now and again to confuse, or rather to grasp better, and thus to criticize.”

One by one, Erlhoff focuses on the purported commonplaces of design: its relationship to art, to ingenuity, to fashion, to death, to the surface and to creation per se. He gives us a plausible account of the reasons for the “infantile eroticism” of touchpads, highlights design’s potential to resist the mainstream, which ostensibly enables it to sweep aside all obstacles.

Erlhoff takes the certainties of the insiders and brushes them against the grain. He radically rejects the “disciplining” of design recently espoused by some members of the profession. His theory does not rely on a set structure when the ground underneath is anything but firm. Instead, he tries to “grasp opacity as a quality and therefore imagine design as an intangible element.” He says that this necessarily leads to “contradictions, approximations, a lack of sharp focus, potential confusion” and “in the best case to a design that is as open as it is elastic, and most certainly not to a discipline,” for “design if a beacon of hope, a trailblazer and practical example” precisely because it is potentially trans-disciplinary.

Erlhoff explains, providing many a vivid example, that his design theory can essentially function like a radio, like a “movie in your head”. He dictates his texts. And one could well imagine them forming an audiobook. Just as one can read them sitting comfortably in an armchair with a cigar and a glass of red wine at hand. Or with greater attentiveness, perched on the front edge of a chair. Be that as it may, this book, with its many references to art, architecture, sociology, history and many other fields of knowledge, challenges us to understand design in a broader way. It encourages us to call for design such as does not yet exist – although it definitely should.