The central railway station in Chemnitz is a pretty big collage. Since the first railway line opened in 1852 linking the thriving industrial city with Leipzig, Dresden, Riesa and Zwickau, the railway station has been continually expanded, converted or restructured. Consequently, an attractive Classicist station building from 1872 still stands on Bahnhofsplatz, which however is only a relatively small entrance building to the station hall proper behind it. It almost looks like a Potemkin façade, lending something of a respectable face to the extensive rail tracks, marshalling yards, sheds and warehouses hidden behind it.

The station largely escaped heavy bombing in World War II, yet what minor damage there was remained unrepaired for a long time after the War. As for many of the major railway stations in the still young East Germany, comprehensive redesigns were conceived for the entire station area, but never realized. In Chemnitz – now to be called Karl-Marx-Stadt for almost 40 years – priority was given to the construction of socialist housing estates on vacant plots and on the periphery.

The station hall in contrast fell into disrepair and was finally demolished in 1972. In its place a dual-aisled, 13-meter-high concrete-and-steel hall was constructed over most of the platforms whose architecture had more to do with other major projects of the new East German era than its immediate surroundings. The hall did not reference either the surviving buildings in the city center nor the Classicism of the preserved station building in any way, rather its chessboard pattern of precast concrete sections called to mind the new department stores; it opened to the sky far more than to the city and was clearly sufficient in itself.

From 1992 until 1994 this hall had to be renovated once more, and then nothing happened for a long time. Perhaps Deutsche Bahn wanted to wait and see how the region developed. Falling passenger numbers ultimately led to the decision to remove the proud, large railway station from the long-distance network as of 2006. Since then Chemnitz has been the most populous city in Germany to be served only by regional trains.
Accordingly, plans were begun for a new comprehensive restructuring of the railway station. Bearing the name “Chemnitz Model”, Deutsche Bahn realized a new concept in which the streetcars on the regional network can also travel directly into the large platform hall, facilitating train changes. In future special switches here are also intended to enable streetcars to directly move onto the Deutsche Bahn network. 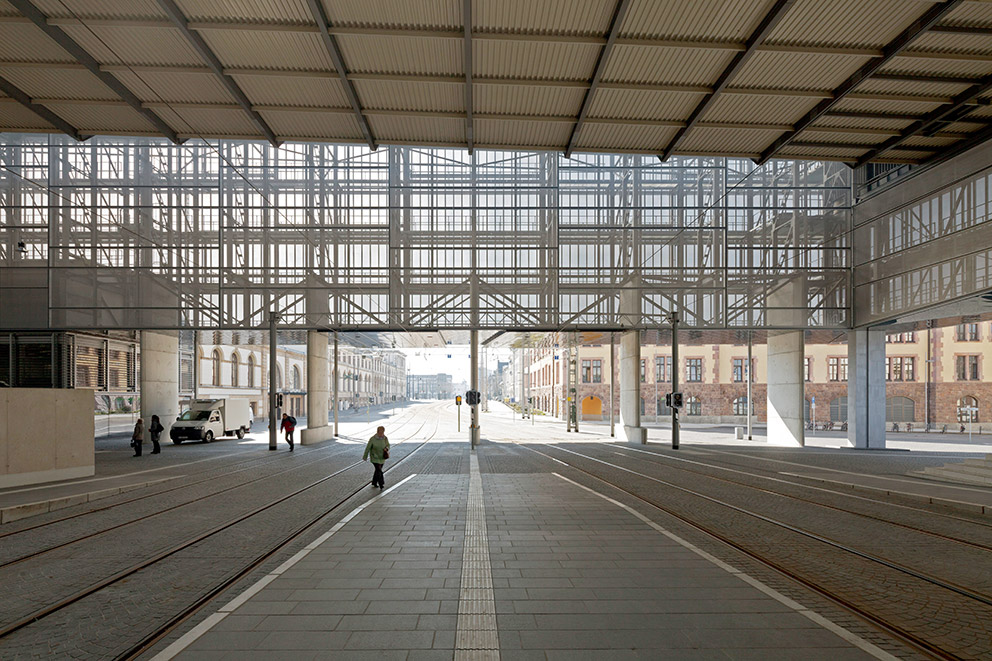 Opaque from the outside, transparent on the inside: The new shell enables diffuse light to penetrate the station hall and simultaneously casts silhouettes of the load-bearing structure. Photo Jan Bitter © Grüntuch Ernst Architekten

Berlin architects Armand Grüntuch and Almut Grüntuch-Ernst won the competition for the redesign of the hall in 2004. They proposed preserving and reinforcing the hall’s 1970s load-bearing structure, but largely removing its cladding. A transverse building was demolished and the level of the first four tracks lowered to be aligned with the city. Now the streetcar tracks run directly into the hall. Here the hall opens up to the city in an incredible way: As though someone had lifted the old curtain a little, here you look along the entire length of the building into the hall and through it. The old musty, closed-off and dark hall is gone. Now, residents of the surrounding districts of the city are astounded to see that this train station can also be an amazing covered urban space. The streetcars now run north-to-south parallel to the tracks of the regional lines through the large, bright hall. Along the west side wide steps, suitable for sitting on, form a small platform accommodating trees and several green benches from which one has a pleasant overview of the entire goings-on in the station hall. 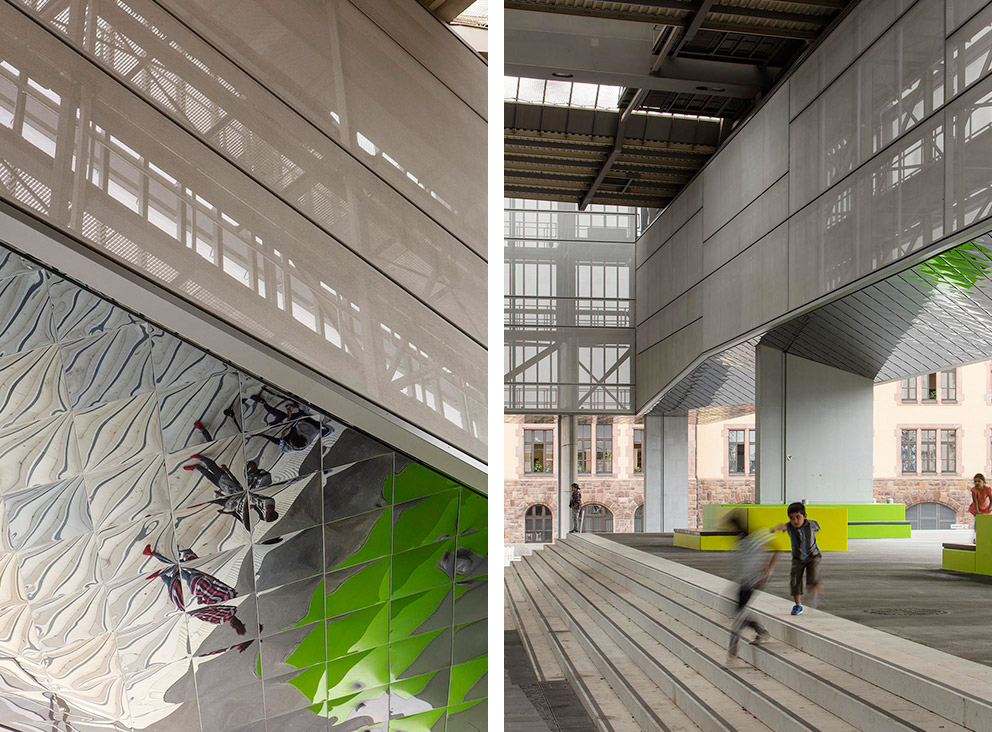 A new steel construction was positioned on the reinforced-concrete pillars, with the old roof largely being preserved. However, along the side walls matte ETFE membranes now form the new façade towards the city. Their curved surfaces shimmered silver in the Chemnitz sunshine when I visited the train station in the summer. From the outside they appear relatively opaque, but inside a lightweight textile is stretched over the structure allowing daylight to penetrate deep into the hall, where shadows are also cast of the frame of the steel construction with its maintenance catwalks. The different-sized façade modules still reference the chessboard-like design of the former 1970s façade, but in a very unobtrusive fashion. The undersides of the construction, where passengers and passersby walk under the façade into the hall, are clad in polished stainless steel. Anyone looking up will see themselves in a somewhat distorted reflection, slightly blurred, as though traveling at great speed.

The effect of this open hall is astounding. It has become a lively urban space, one that is particularly good also for the surrounding streets, brushing aside their former shadowy existence. Now Mauerstrasse and Minna-Simon-Strasse are resplendent in the silvery shine of ETFE, as though someone had lit them up in grand style. 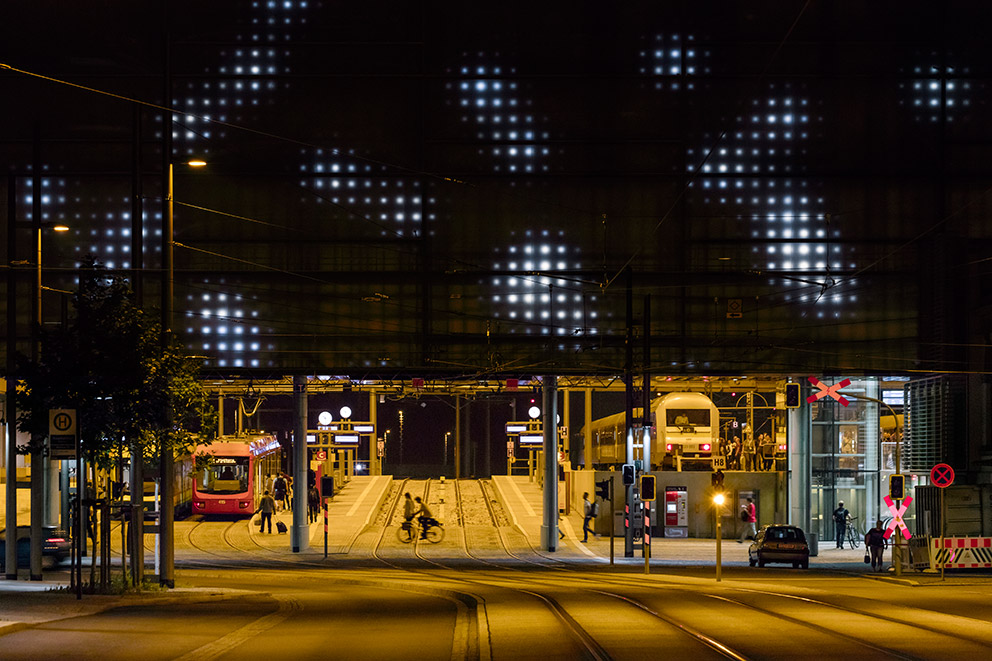 Flocks of birds at the train station

When I visited, the light installation in the façade was not yet operational. At the architects’ invitation, artists’ collective “Random International” inserted points of light in the façade in a strict grid pattern that remain invisible by day but transform the façade into a large, abstract screen by night. Each light can be individually controlled, a system enabling simple, monochrome shadow effects and which immediately calls to mind the light façade installed in the acrylic curves of Kunsthaus Graz by the Berlin studio realities:united in 2003. In the latter the projections are controlled by the Kunsthaus using a special software, giving artists the opportunity to program the building façade in line with the in-house program.

In Chemnitz it seems there are no plans for such a programming. Instead Random International is preparing an installation of its own to represent in abstract form its members’ fascination with the movement of flocks of birds. These movements are then to ripple over the cool, silvery box that is Chemnitz central station like black-and-white waves. It remains to be seen whether this artistic intervention does justice to the wonderful stringency and abstract severity of this façade. For during the day it looks like a silver curtain hanging over the rectangular hall-box and thus forms a highly pleasing contrast to an extremely restless, loud station environment that is otherwise dominated by the screaming ads and store signs of the usual retail chains. The architecture by Grüntuch Ernst succeeds in turning down the volume of this environment in a most pleasant way. Time will tell whether the light installation skillfully amplifies this effect or constitutes yet another, restless dissonance in its environment. 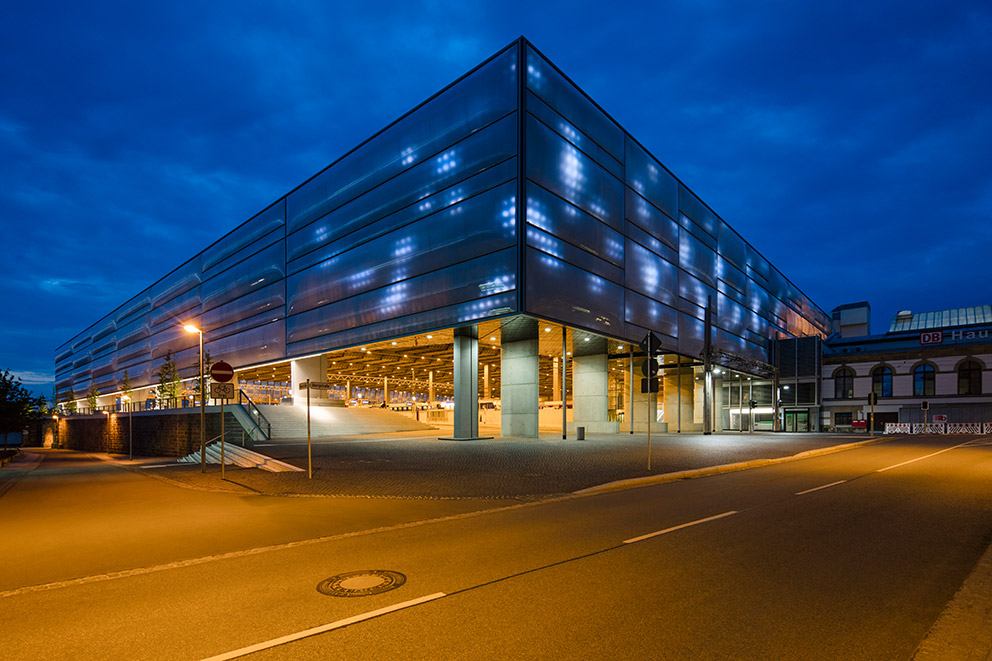 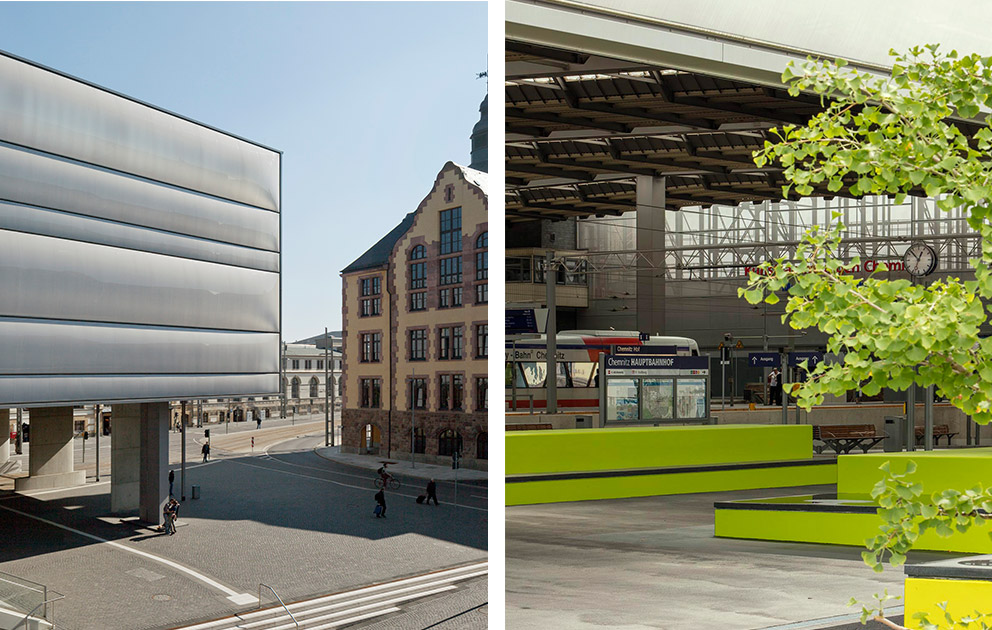 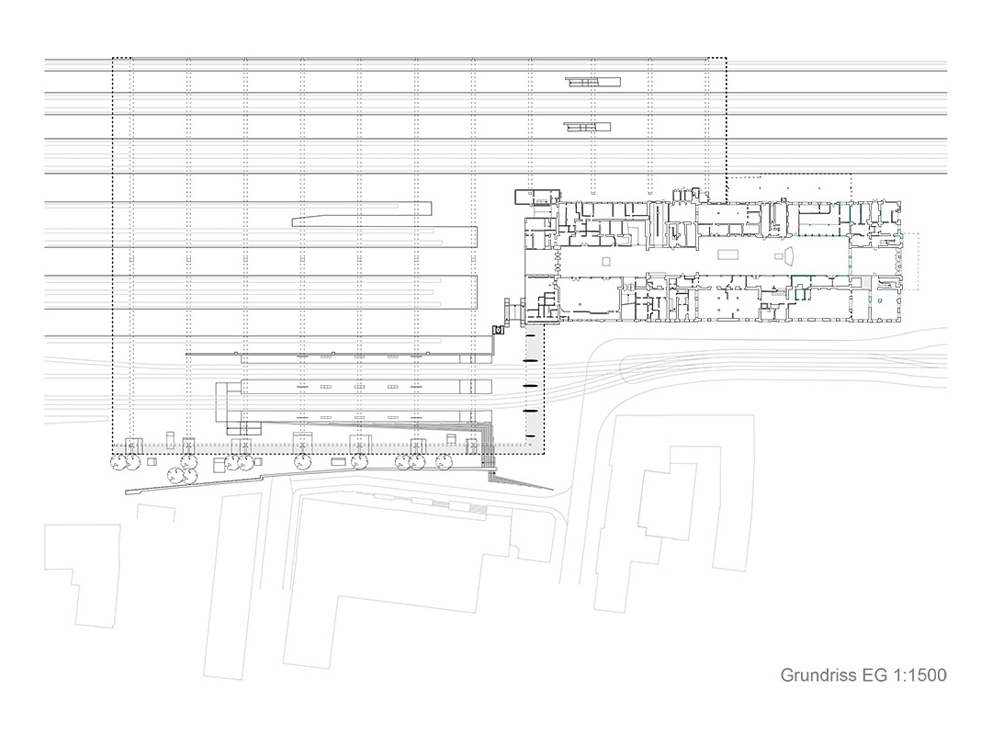 The layout shows the historical station building and the station hall. The tracks for the streetcars and regional trains that arrive and depart here are clearly visible. Plan drawing © Grüntuch Ernst Architekten

View of the new hall with a raised platform, with benches and wide steps inviting visitors to linger a while. Plan drawing © Grüntuch Ernst Architekten