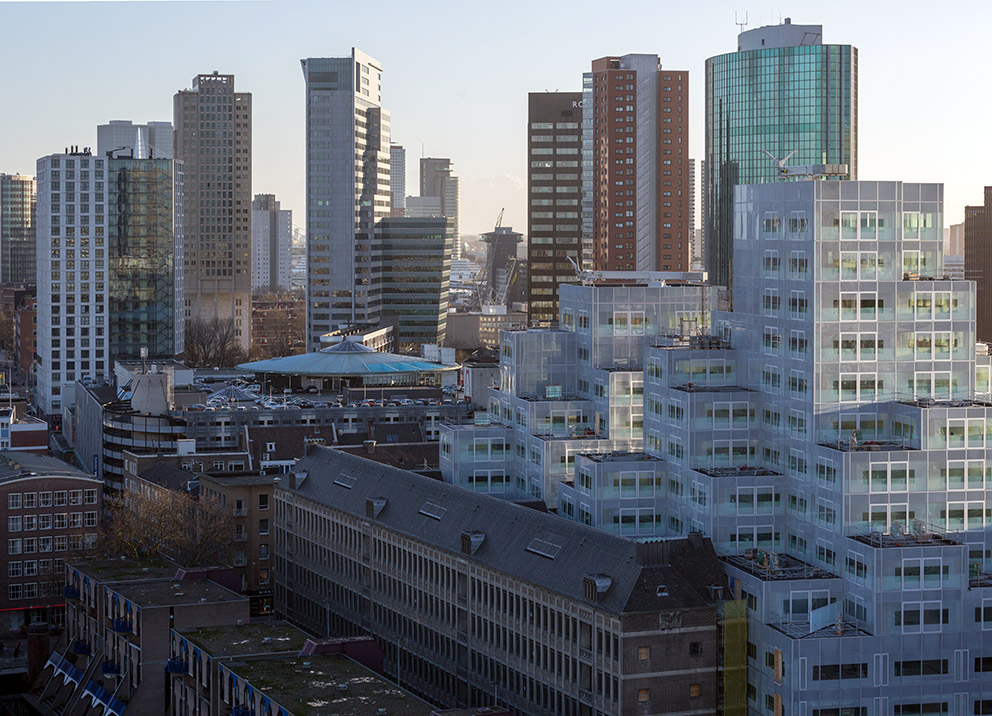 Within a grid everything goes: Living and working in the new Timmerhuis by OMA. Photo © Ossip van Duivenbode

Oh, Rotterdam! Hardly anyone would term the city beautiful or picturesque. And indeed it isn’t. Nor does it want to be. Which makes it so pleasant. No two bricks were left standing during World War II: On May 14, 1940 Rotterdam was almost completely destroyed by a German Luftwaffe bombing raid and the subsequent firestorm. Later, in the spaces where almost nothing was left, the ideas of all manner of architects took root on what a modern city should look like and how it should function. Rotterdam was a large experimental lab for such built ideas, many of which have proven to be fatally flawed, and for quite a motley collection of different architectures.

Now another experiment has been added: The “Timmerhuis” designed by Rem Koolhaas and his Office for Metropolitan Architecture (OMA). The building is in the best of company, as it is located in the immediate vicinity Piet Blom’s “Cube Houses” dance away, Hans Kollhoff’s postmodern high-rise towers up, and MVRDV’s Swiss roll of a market hall stands. All of them seek to combine residences with other functions, be it with retail areas or market stands. OMA’s Timmerhuis is precisely such a hybrid. It is home to a museum, a public authority, shops, and 84 apartments. Like almost everything today, this new build has fallen prey to the tendency to inflate everything out of proportion.

The leap in scale that architecture went through in recent years is especially apparent in this district of Rotterdam: Blom’s “Cube Houses”, in fact even Kollhoff’s tower, seem truly to be relatively miniature when compared to the faceless office buildings in the vicinity and the somewhat strangely shaped market-hall shed. Timmerhuis does not lag behind as regards XXL architecture, though: The grid structure with squares or 7.2 meters in length was erected liked some gigantic Pixellated world to stack up to a height of 60 meters, that in the north tower (14 storeys) and the south tower (11 storeys) actually climbs twin peaks. The new build connects with the L-shaped existing structure, snuggles up to it, and tops it. The entire complex somehow seems like a large container ship wedges between two existing builds.

The steel skeleton conjures up memories of Sol LeWitt’s serial sculptures, Hertzberger’s spatial repetitions, Superstudio’s mega-structures and Cedric Price’s Fun Palace. But OMA rejects any such associations. The building experiments, says Reinier de Graaf, with the maximum spatial variability using the minimum materials. This spatial versatility remains hidden from sight, however, as the Timmerhuis stands out most from the outside by its shimmering glass much-of-a-much. Only the differently sized transparent and translucent surfaces of the glass façade give the huge set of cubes a certain vibrancy – and ensure the building melds with the sky when the heavens are gray.

That said, on the inside the colossus is a great surprise as here it most definitely fulfills Reinier de Graaf’s premise. Not only do 78 of the 84 apartment layouts differ from one another, but the surfaces of the public authority are astonishingly varied in terms of spatial use. The standard materials preferred by the Dutch construction industry have been combined with a very heterogeneous interior design. Some of the details bring to mind the material properties and approach seen in OMA’s design for the “G-Star” HQ in Amsterdam; in fact, they are in part identical. Which is hardly surprising, as both buildings were planned at more or less the same time. Like those at G-Star, the open and inviting staircases in the Timmerhuis encourage you to walk and eschew the elevators. And instead of endless corridors and single-cell offices, in the public authority ideas for modern working environments have been realized that are otherwise to be found at Google and the like, fostering interaction between staff members and to save square meters and thus costs. There are thus only 1,200 workstations for the 1,800 employees. However, this works out well, as given part-time systems and home-office arrangements, usually not everyone is here at once, and no one has a fixed work station to call their own.

Spacious window areas and the atrium (which clearly reveals the structure of the grid) create interest visual relationships and a diversity of interlocked spaces. Contacts between colleagues are thus enhanced visually, with large spaces allocated for direct and informal interaction. Homely meeting and seating areas and meeting points have thus been created not just around the kitchenettes and lockers, but even in the open “pedestrian” zones. The colors of the furniture and curtains, the carpets with their different prints, indeed all the interior architecture’s “software”, slightly softens the hard-edged feel to the building’s material qualities, with metal floors, white steel girders glass facades, and suspended ceilings. Unlike the G-Star HQ, where the offices consciously celebrate that industrial solidity.

Even if the Timmerhuis is distinctly unlike the architecture of the Fondazione Prada in Milan (completely different program and different design preconditions), a comparison shows one thing clearly. While the Milan ensemble, with its veritable orgy of rooms and homage to the most differing of materials, is architecturally convincing even without anyone populating it, the opposite is true of the Timmerhuis. Its rigidity needs to be infused with life, namely by the users’ own interests must come to bear in the terraces and open zones. Only when in everyday use do the qualities of this thoroughly rational architecture come into their own. 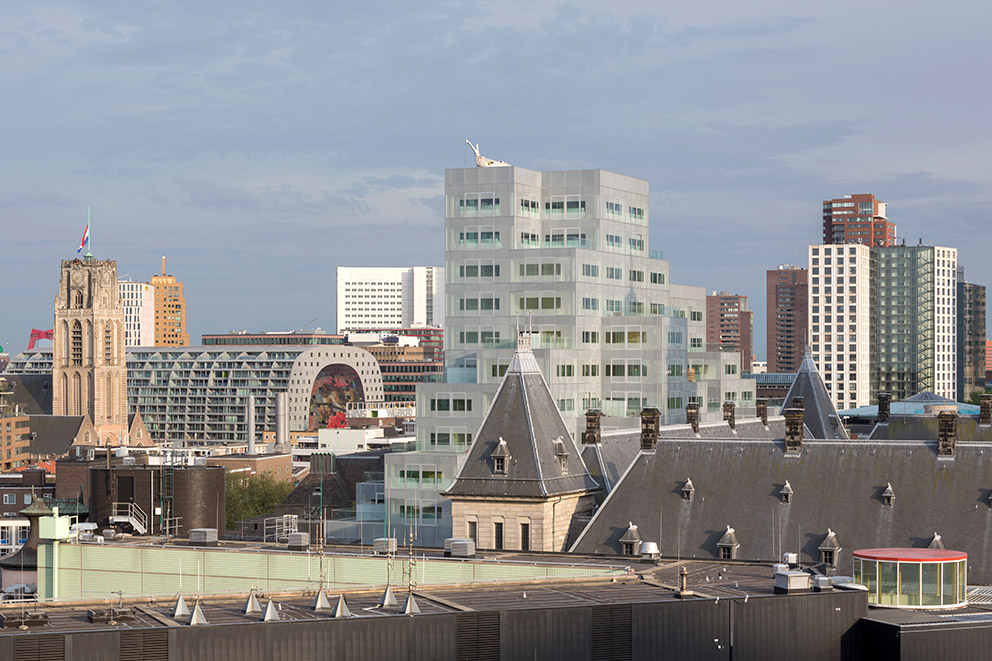 The Timmerhuis is another unique piece in the Rotterdam Architecture Zoo. Photo © Ossip van Duivenbode 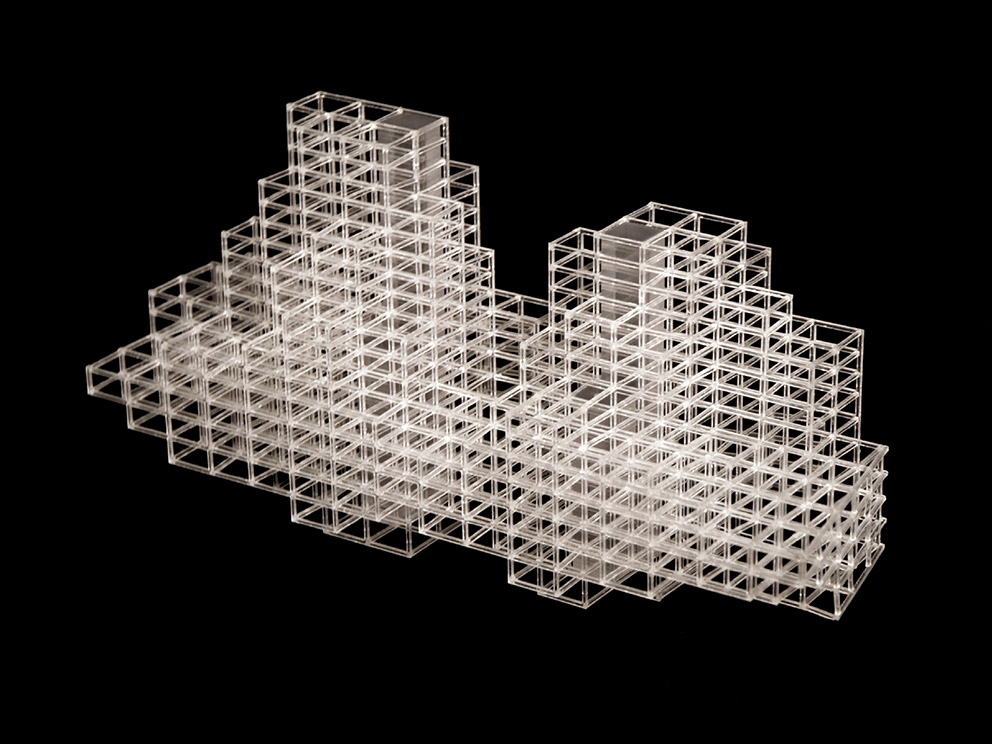 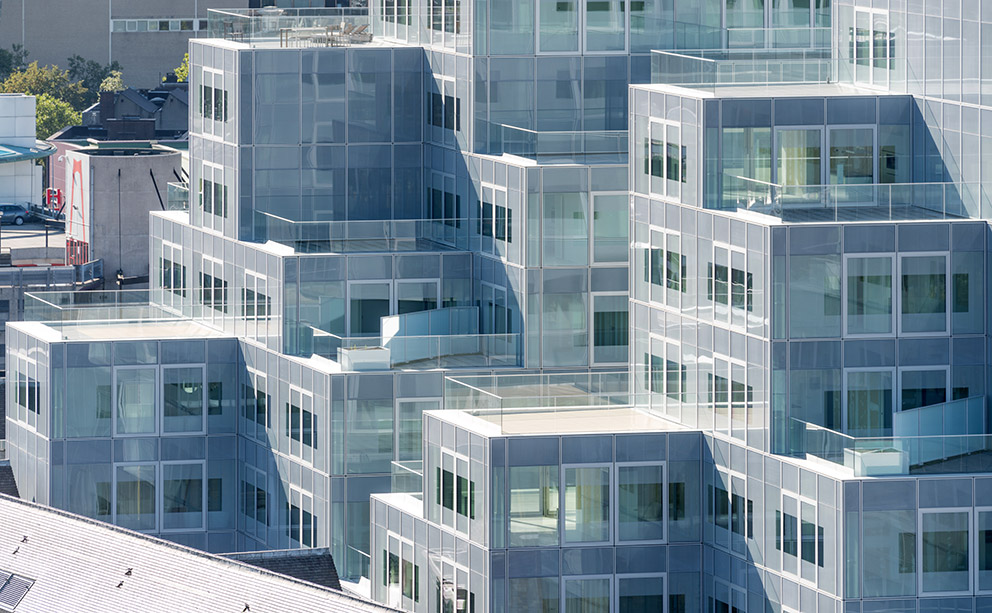 Only 6 of the 84 apartments have identical floor plans. Photo © Ossip van Duivenbode 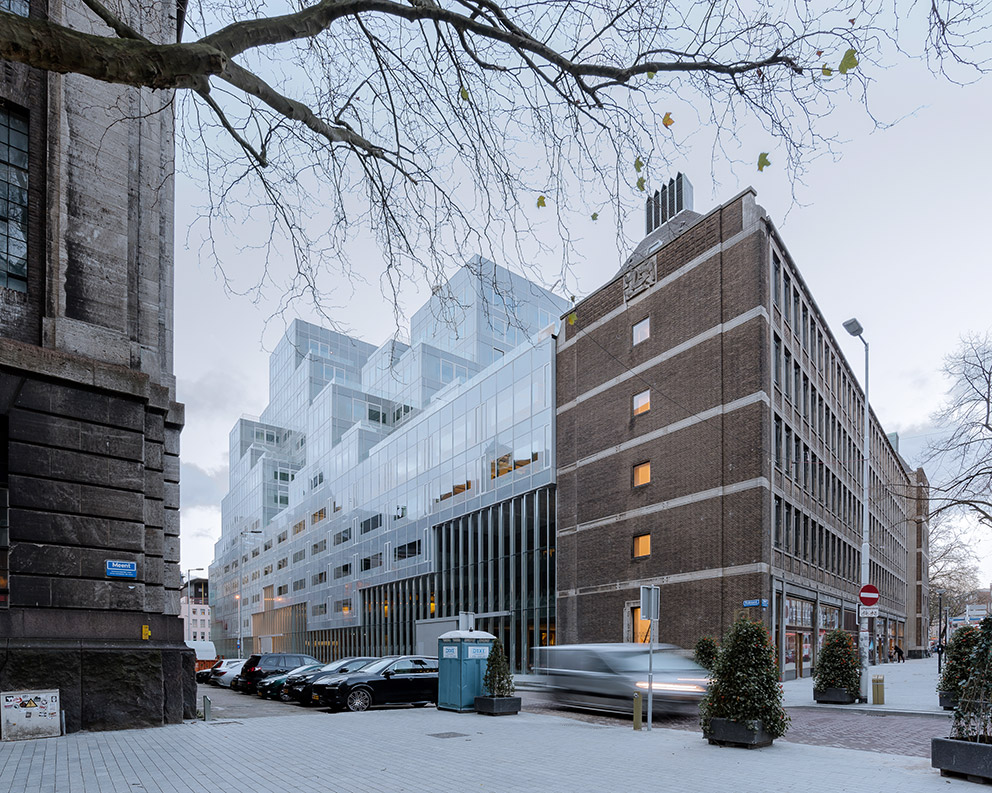 The new building is nestled into the existing structure. Photo © Sebastian van Damme 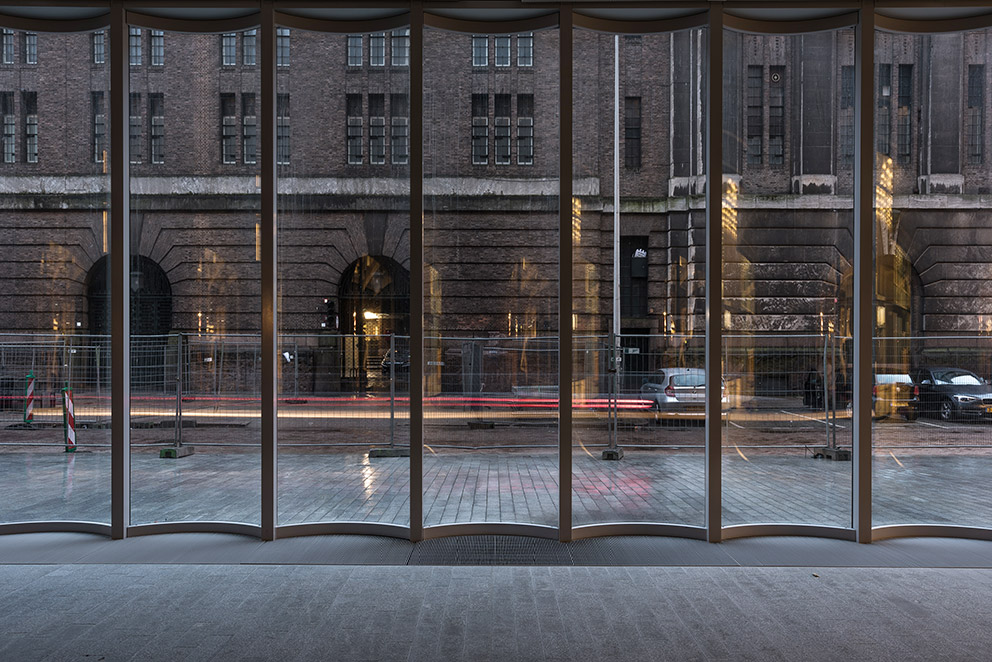 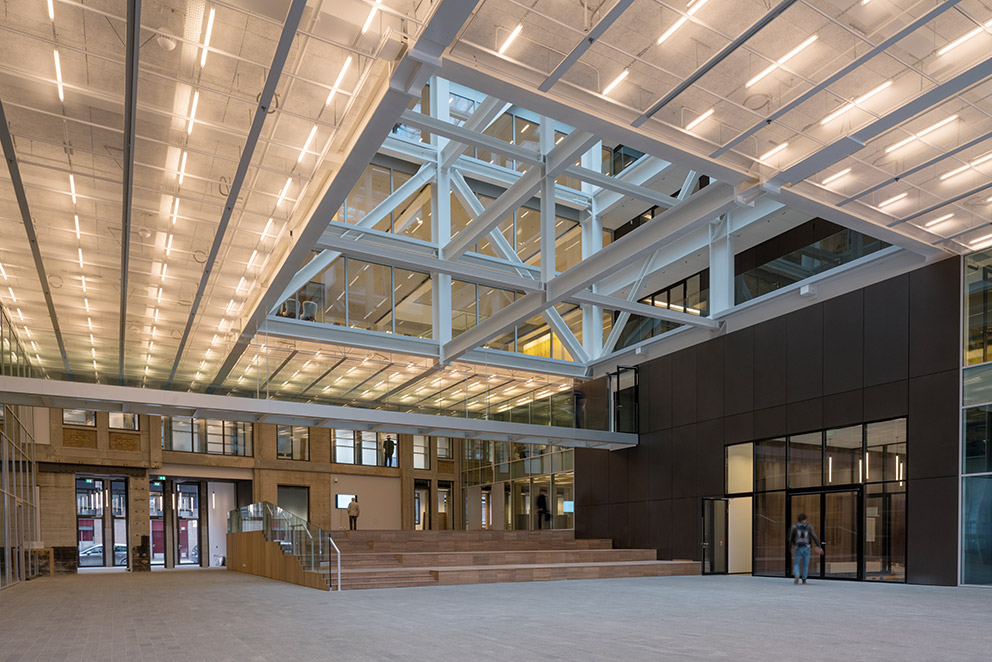 in the entrance hall are the entrances to the apartments and to the offices of the Authority located. Photo © Ossip van Duivenbode 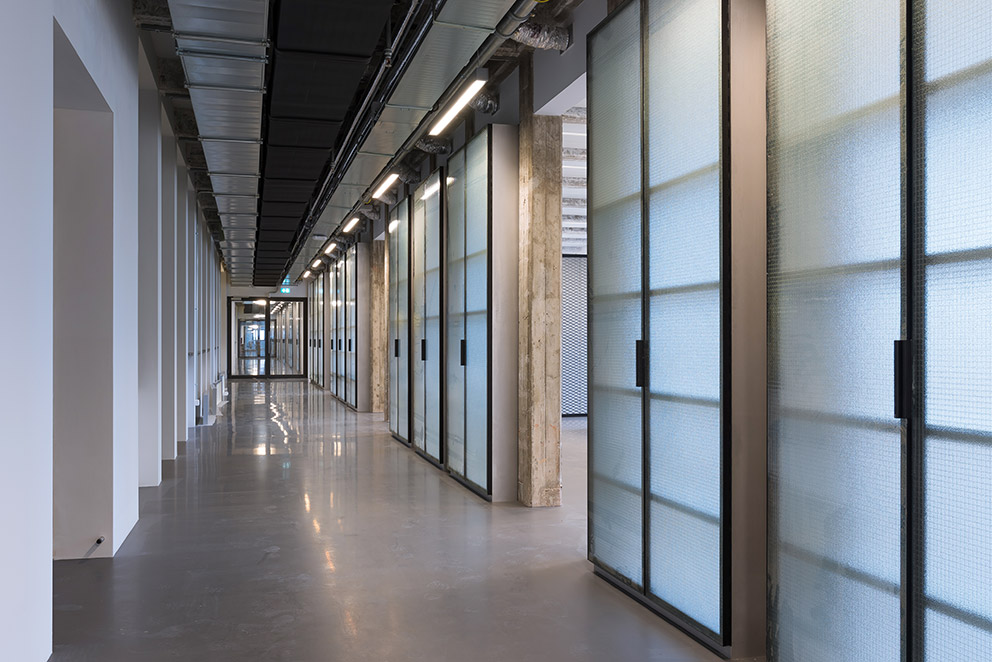 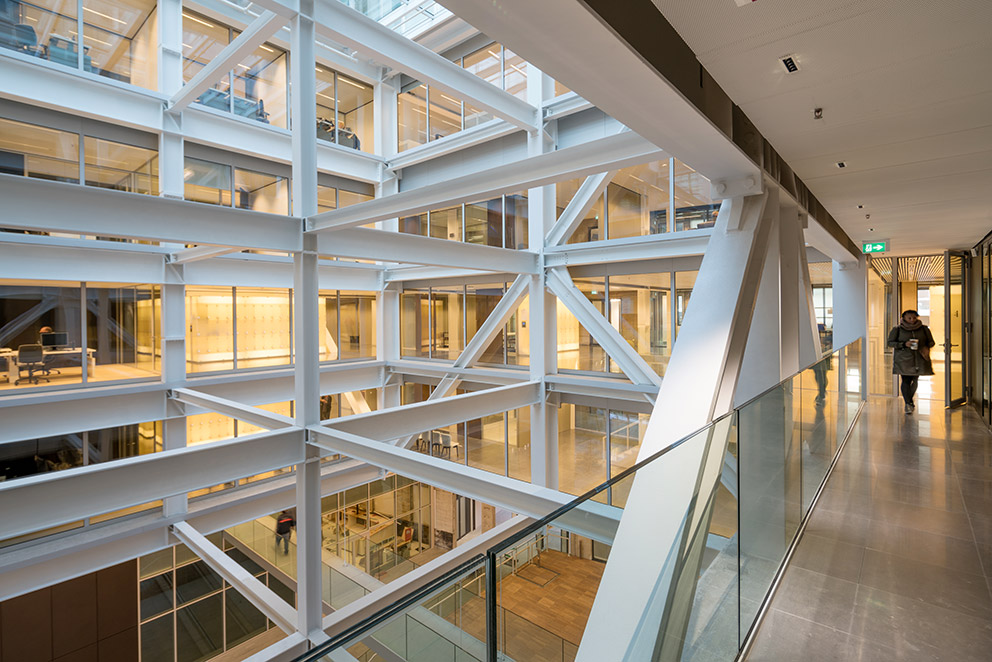 The steel frame is made of 3.850 tonnes of construction steel. Photo © Ossip van Duivenbode 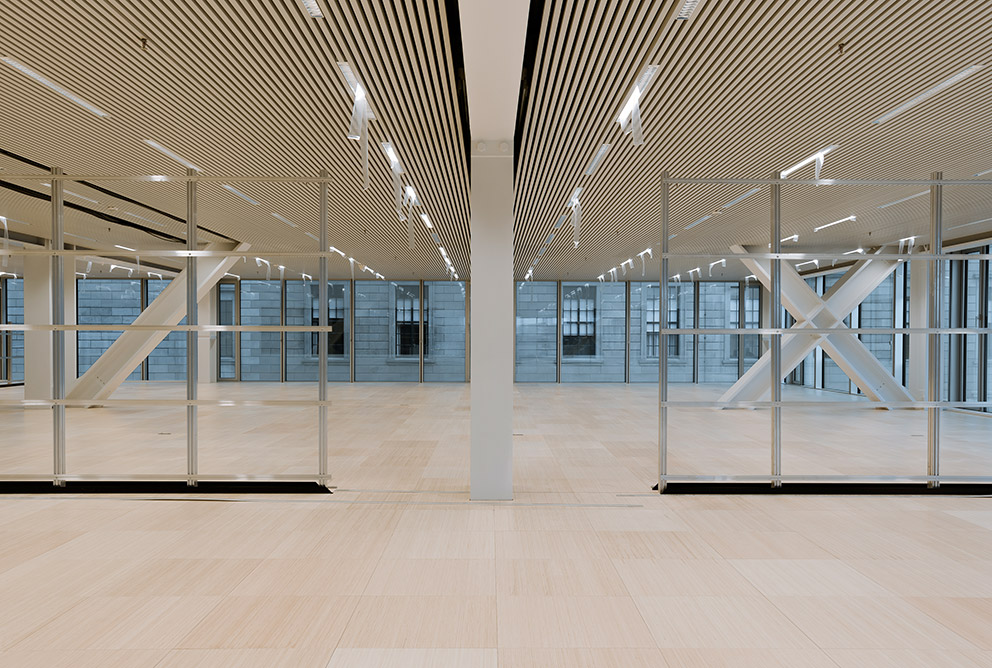 The work areas are fitted with a wooden floor... Photo © Sebastian van Damme 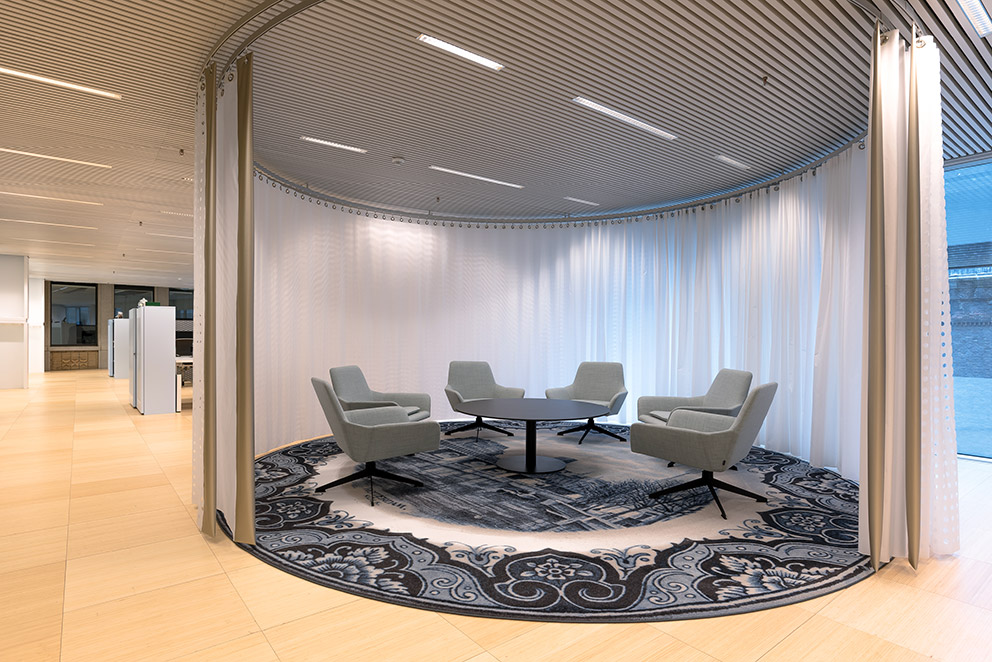