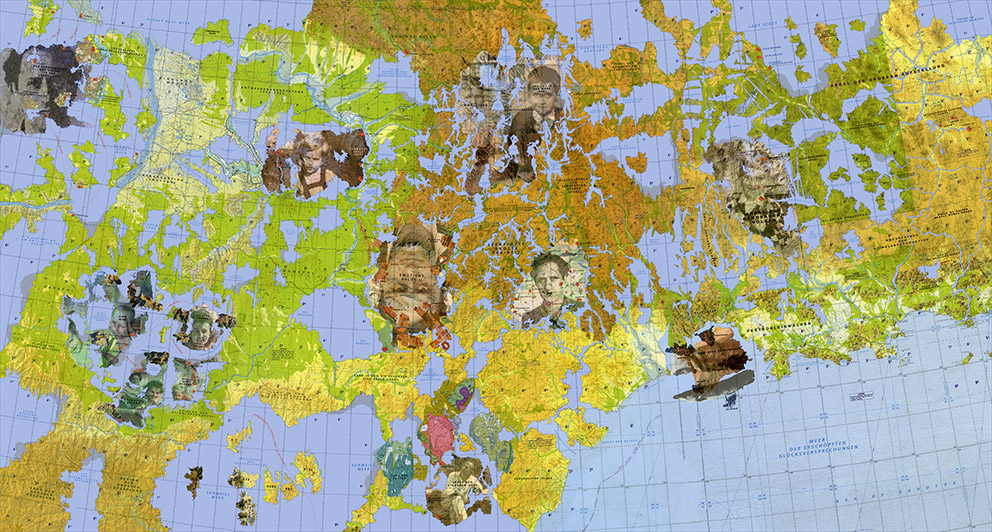 Let your eye wander over any topographical map at random, and you’ll already find yourself wandering around your imaginings of remote countries and places. In old versions you encounter not only continents, bizarre islands and remote countries as outlines and shapes, but sometimes also fabled beings, animals, ships and the names of mythical cities. If required, maps also feature information on the depths of the sea passages or the height of the mountains – and much more besides. Maps were never neutral or even harmless, as they often demonstrated in the course of their history. Anyone who possessed a precise map knew exactly where the enemy was, where his flanks were exposed: At land and at sea.

There was always originally a strong link between cartography and art, between paintings and maps and charts, as both painters and cartographers chart the world in two dimensions. Their paths did not go different ways until the 19th century. So the artists were inevitably electrified by map-making, especially as they recorded more and different things than merely the Earth’s outer shape. Stephan Huber, since starting to pursue his particular type of art cartography in 1999, has produced numerous quite extraordinary maps filled with somewhat different information: distances and routes, photographs, names, exotic archipelagoes and zones helping his audiences find their way and place in the impassible terrain of the imagination.

The course charted thus goes a long way, inwards. And in the process now and again Stephan Huber seems to feel a bit like the protagonist in Georg Büchner’s Lenz does in the mountains, where he sometimes found it unpleasant not to be able “to walk on my head”. After all, Huber is no typical geodesist or surveyor. He feels it is not enough to define the location of certain dots on the Earth’s surface and then project them onto a flat piece of paper. And objectivity is not his thing either: His art maps are instead conjectures that set our purportedly so certain knowledge afloat on exciting bearings. And because what he surveys in his charts are himself and his view of the world, giving it a little order, Huber includes memories, dreams, desires, wishes, feelings, thoughts and social relationships, sorting them by his act of mapping. Which is why Stephan Huber’s fictitious maps show us in passing how a generally valid geography and cartography based on objective criteria can become a veritable auto-geography.

Recently, Huber brought together all these maps in a single quite marvelous volume; it is no coincidence that its format and appearance perfectly resembles the first examples of Diercke school Weltatlas, with their cloth cover in brown and the letters in embossed gold. Huber’s atlas almost seems official with its large, fold-out maps. It’s just that the maps in Huber’s world atlas are of a completely different kind. There are world maps, regional maps, city maps, maps of persons, maps on art, political maps, science maps, and semi-scientific maps – and yes even maps of love.

All the maps come complete with extensive explanations and “Map 01” itself highlights “the simultaneity of cosmopolitan conspiracy theories and regional forms of life,” which extends as far as the ground plan of Huber’s parental home. At the western tip of the peninsula of “Westallgäu” there are all manner of “feel-good places” with the names Paradise, MellowMeadow and Schönau, yet there are also others called Barren, Badsoil and Hellfarmer.
On Map 04 to the south of a “Great Barrier” (huge, snowclad mountain chain) we see the “NotOnlyButAlso-Land (Après la Terreur)” along with zones or “Error”, “Alienation”, “Repression” and “Processing”. And right next to the “Tropic of Hope” there’s “Utopia”, bordering on the tropics of “the finite Ego” and “Egotism”.

Map 06 is decidedly autobiographical and addresses the “Cartographer’s Family of Origin”. Between “Huber’s Spit” and the “Sea of Blue Blood” in the north, and the group of “Islands of Mariners’ Dreams” and the “Sea of Exhausted Promises of Happiness” in the south, there’s a watery archipelago out of which here and there photographs of the artist as a child and as a man emerge. Whereby on “Le Papa Island” there are places called “Irascible” and “GoodSleep”. If you move on to the “Maps of Art” you will come across a sea chart called “Mypersonalartsystem” and among the “Paintexcentricislands” there’s a “Ludwig’s Park of the Souls” and “Isola D’Annunzio”.

Huber’s maps not only enjoy celebrating Baroque opulence, they all also differ considerably from conventional maps in terms of color and shape. In the atlas these cartographic inventions culminate in the hiking map “It all flows, rushes and burbles”. Here, our artist cartographer imagines a green Arcadia, in which many artists’ hearts beat strong, and the lakes have the outline of famous works by artists that he likes. And last but not least one follows the “Passage through the Superstructure” riveted to the map recording the epochs the artist’s mind travels through, on what sea of role models, influences and events he has sailed. It is an archipelago of playfully marbled islands and atolls, including the “Theodor isle” (Adorno) and “Île Jean-François” (Lyotard), a territory in blue and orange where the “incommensurable is tolerated”.

The Weltatlas does have one disadvantage however. Since the originals of many of the map were very large and had to be reduced in size to be printed, you often need a magnifying glass to follow Huber’s imagination down into the pronounced details.

Thus Huber sails now and again on the sea of imagination to islands of subjective truth that (as with Immanuel Kant) are called “the country of truth (a charming name)”, which is surrounded by a “broad and stormy ocean, the actual home of semblance, where the one or other bank of fog and melting ice gives lie if not life to new countries and by constantly deceiving the mariner sailing around it bent on exploration with empty hopes, ensnares him in adventures from which he will never cease, and which can also never end.”

For Huber, who terms his cartography a “psycho-geography of post-Modernity”, the maps designate “cross-border zones, sensations and places from my private biography in antagonistic tension with the outside world. They construct imaginary spaces, spaces stripped bare of reality and located in the world of phantasmagoria.” Not just but precisely in the spirit of “a merry road, a mazy road, and such as we did tread ...”. 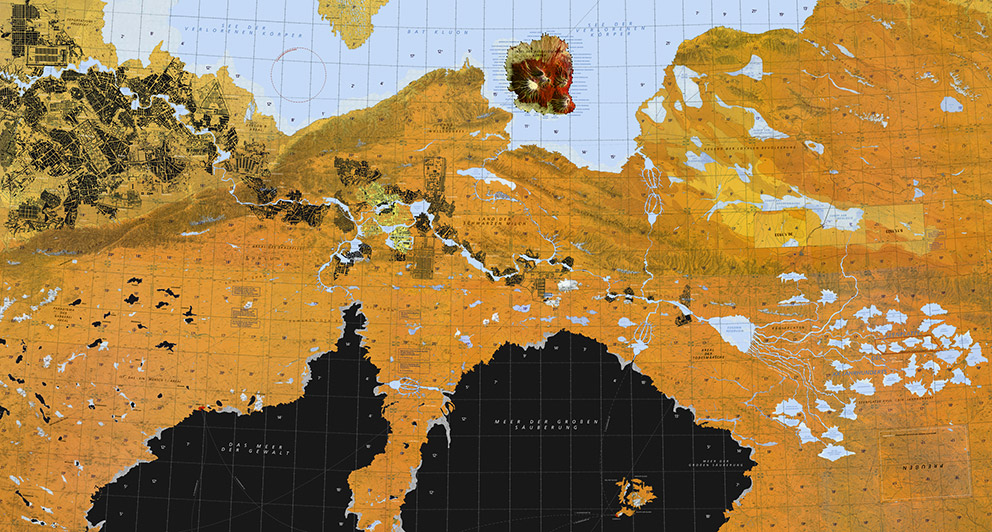