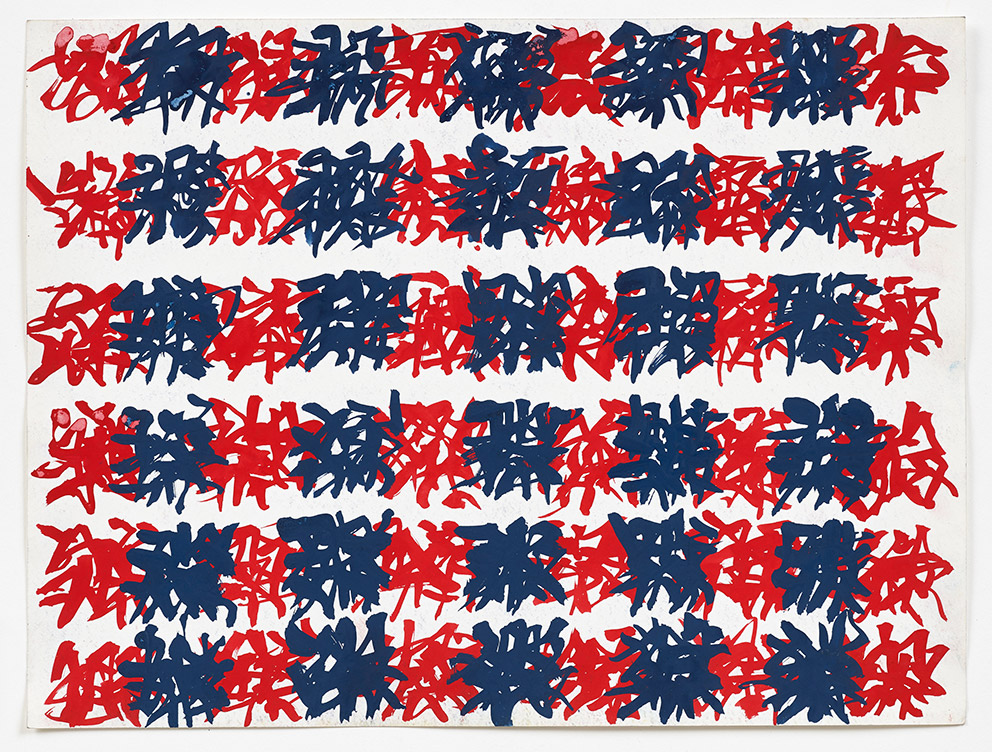 Sometimes, albeit rarely, the past returns with a real punch into the present and for a brief moment stirs things up completely. Rolf-Gunter Dienst is one of the very few who is just as much a writer as he is a painter. Not only did he visit many, now famous New York-based artists in their studios back in the 1960s and report on the encounters in books and magazines, he has also pursued painting with a vengeance and never ceased since to advance the field, and to ponder it both in words and brushstrokes.

Down through the years a few of his early pictures or gouaches were to be seen in the one or other exhibition; however, never since they were made has a larger number of them ever gone on display in a solo show. The first person who has managed to present them that way is gallerist Max Hetzler, who has never given up trying to convince the artist to allow some of his early works out of the bag. To quite considerable success. As the exhibition “Rolf-Gunter Dienst. Early Pictures and Gouaches”, devoted exclusively to works made in 1962 and 1963, is a real surprise. Irrespective of whether you find them good, do not really know them, or have no idea about them whatsoever, it is astonishing how fresh and powerful these paintings are, to what extent color and gesture are mutually encouraging and enhancing.

The images bear names such as “Diary of Moments, 11 July 1962”, “My Poem Called Color” (1962), “Sign Language” (1963) or simply “Untitled”. Even if the painterly gesture that is concentrated in Dienst’s characteristic symbolic abbreviations often only occurs on its own in the early works, it does in some instances take the stage as a collective series and dissolves into the harmony of all the parts. As a result of which on encountering others of its ilk the isolated subjective item gives rise to a surplus of signification. Sometimes the color pattern seems leisurely, airy, transparent – like a coarse weave where you can discern every stitch. Sometimes the viewer’s eye follows how one gesture masks the others, painting or drawing over them, as if the purpose were to decipher a palimpsest. Irrespective of how closely one inspects the images, only rarely can you identify the exact location of these knotted color symbols given a kind of painterly lack of focus.

None of that would emerge in such a surprising and refreshing way if current paintings by Dienst were not on show parallel at Galerie Diehl and its project space Diehl Cube. What is surprising is not that Dienst’s painting has changed over the last 50-plus years. That’s an obvious. What is surprising is their tension, what is astonishing is their reach. In his current output individual abbreviations are again to be seen. While the gesture seemed decidedly triumphant in the early images, it now seems consciously softer. The weave of colors, the texture, the layers and the superimposed layers seem more saturated, more intrinsically differentiated; the pictorial space expands more homogeneously, seems less agitated. Here, color no longer clamors, it blossoms, withers, shimmers, lows, gleams...

One thrust of the three exhibitions is that you perceived the “current Dienst” differently as soon as you have seen the early works. Another, decisive point is that today the “early Dienst” no longer appears anything like the person he was more than 50 years ago. Because unlike in a retrospective, here all the steps in-between remain hidden from view and the beholder is not challenged to try and follow the artistic development and instead simply watch the individual works respond direct to one another. The distance in time collapses and in the works’ innate historicity suddenly sets sparks flying.
When viewing these images you directly experience how color radiates and foams, crashing like waves here and there, how it can conceal or reveal, mourn or celebrate. Because while something is set in motion between the gesture and ground, the image emerges as a reality in its own right reminding us how mercurial and unstable our view of what occurs before our own eyes is, and how exhilarating it can be. 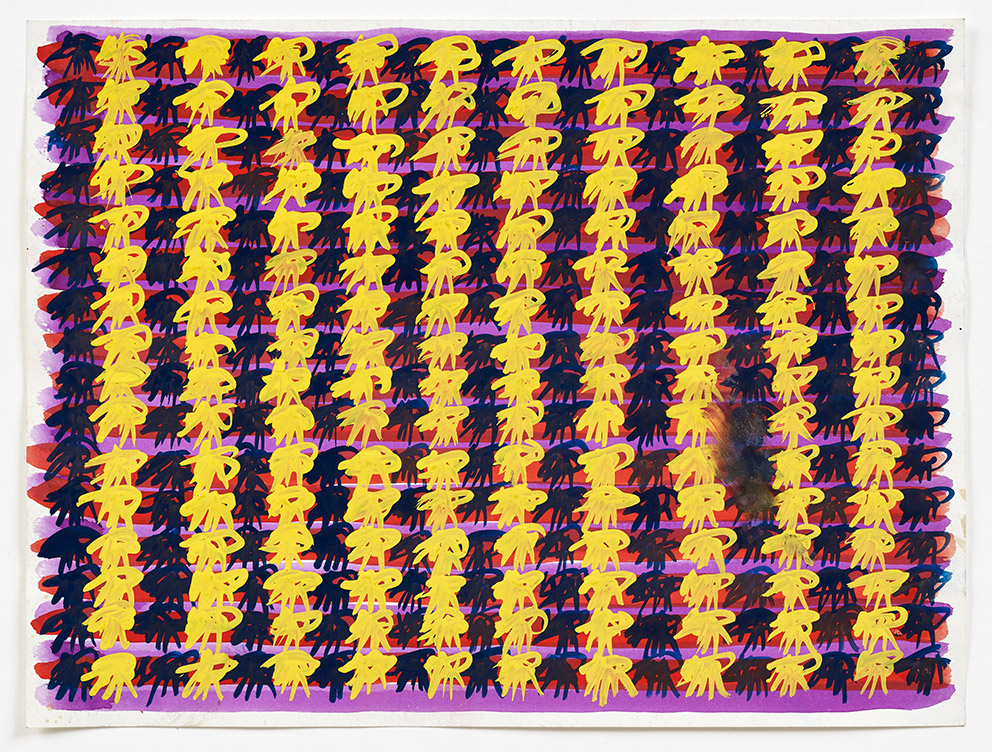 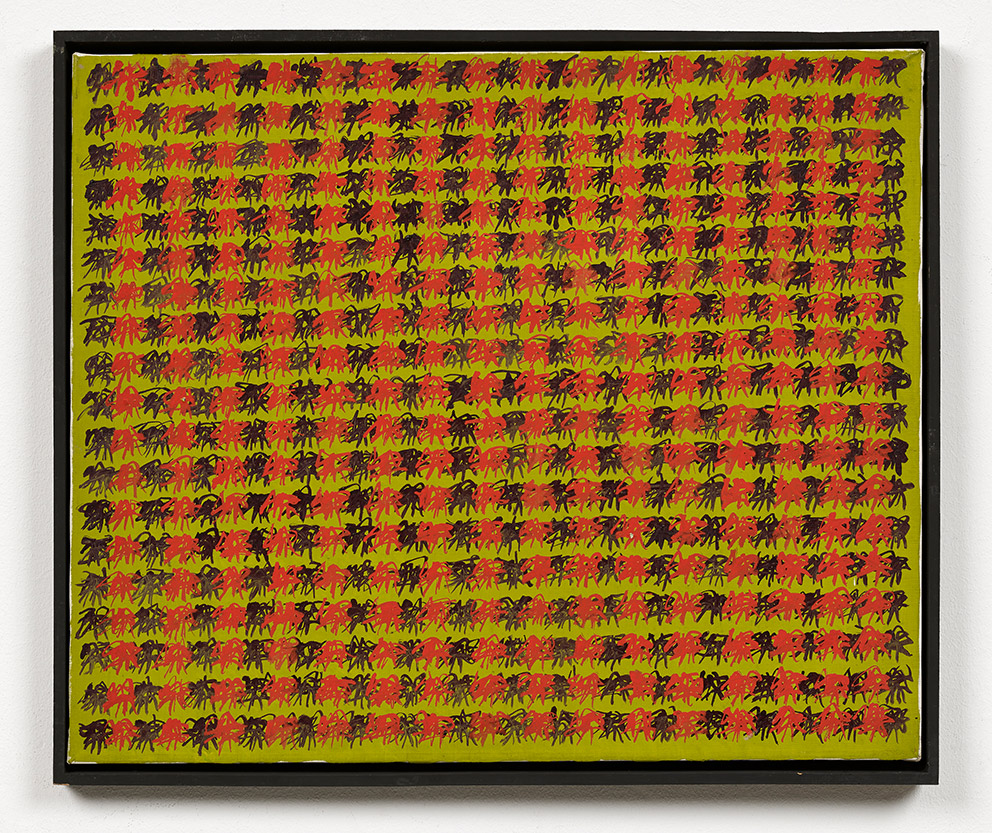