What is a bed? A relaxation machine or something like the middle class' average "Origine du monde"? This is where it all begins and ends, with passion and pain? Not what you are thinking, not birth and death, but the usual furniture jubilee-year-prices-attention-grabbing game, that is played out day-in day-out, while we so educated in aesthetics, image theory and cultural sociology are busy studying the latest novelties from Milan with great delight, pondering sustainable production methods, or celebrating design as a process. The game is where everyday life starts, where for many the reality of an average home in a capitalist feelgood zone is shaped.

On offer, for example, is a "Wickerwork Bed" at the jubilee price of only 129 euros instead of 499 euros, "Color: colonial natural, with wooden feet", to make certain that not only citizens hell-bent on decorating their rooms, but all the neo-colonialism theorists have fun, not to mention those of us who knew that beds were made for walking. What? You don't need a bed? Nonsense! After all, in the selfsame mega-furniture-store, and its next campaign is probably just round the corner, you could have claimed your Xmas gift of 1,000 euros. All you would have had to do was spend 5,000 of that weakening currency. Had you only had 500 in your pocket, you would still have been gifted 50, which translates into a good 10 percent. Deal. No deal? And so that even housewives steeped in Gender Studies believe in it all, the cover boasts two hunky-chunky Santas complete with red packaging standing before a BBQ. And the other colorful pages present marvelously silent kitchens, spick and span, odor-free, with prices gleaming out at you.

It is not as if the elaborately designed furniture with which we constantly concern ourselves is not real. But what you see in the brochures of the furniture retail giants and in the direct mailing and newspaper ads of the large, (and usually they are Mega and XXL) and thus normal, average furniture stores, now that is as real as the furniture and home interior can get in 2010. We need to square up to this fact. After all, we need to know what we are dealing with and how furniture generally tends to live.

The competition may lack a muscular Santa Claus but offer "price-crunching weeks" to at long last drive out the greed of the neo-liberal bankers with the avarice of generous dealers. And beneath the XXXL slogan grins a fat TV actor otherwise best known as a soap vicar. And he certainly does not take the stage as a critical cabaret player. We were particularly taken by the "all-in studio" with "bodies and fronts in Alpine white plastic" (evidently word has not yet got out that the glaciers are now gray) and "Front trimming in metallic gray, 5 parts" on pages 12-13. All of that ostensibly for just 239 euros instead of 1,025. In fact, only the cast iron "Buddha head", "height: approx. 12 cm" for a mere 3.99 euros really fits the colonial bill.

In the final analysis, or is this all part of a neo-capitalistic colonial style? All possible thanks to cheap manufacturing (excluding the waste-disposal pick-up date) from low-wage countries incl. maximized profits. Which the trio of girls in the competitor's jubilee issue, all three clad in truly golden robes, of course know, but consciously conceal. Just how far we are here from some aesthetic education of man that Schiller once advocated is revealed by the motto of another provider of democratic mass taste, a company that goes by the nice name of "mömax": "Immediately looks better" we read on almost every page, in white, in a green arrow, even if we don't really want to believe it. As little as we do the presence of a "touch of Africa" thanks to inclusion of the "cushion with the animal hide look" or "deco-rods" in our homes. "A refined sense of the exotic" on the "micro-fiber blanket with the animal-hide print" is clearly needed just as much as enjoying "storage fun" with a chest of drawers, the series comes in walnut or beech, "imitation" of course. Until we at long last understand that the real ABC of interiors is "Sleep sideways", "cast-iron frame", "wickerwork bed", "double bed". Not Cassina, Edra, Vitra or e15. And given so much XXXL and Xmas colonialism, even the plastic giraffe for only 3.99 euros looks inquisitive. The clouds of illusion that blow between us and reality will nevertheless mask its view. 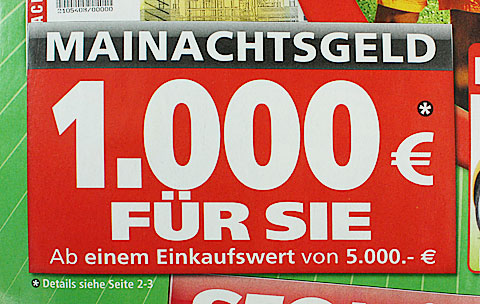 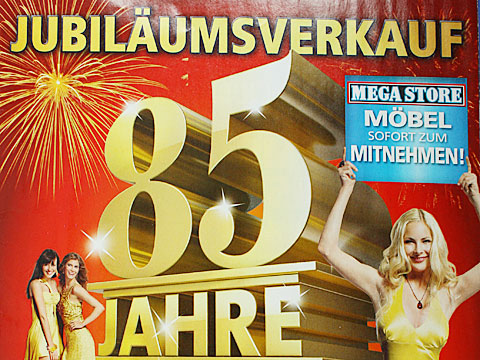 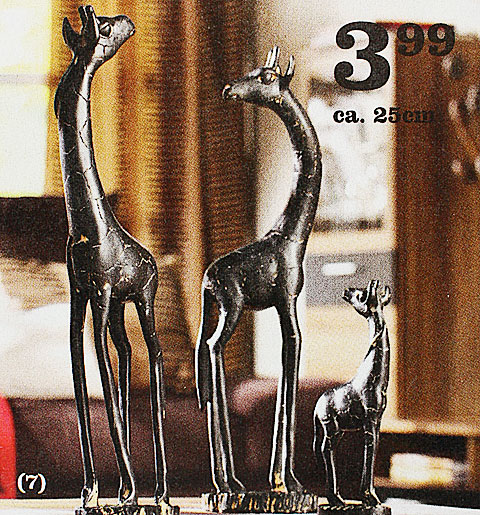 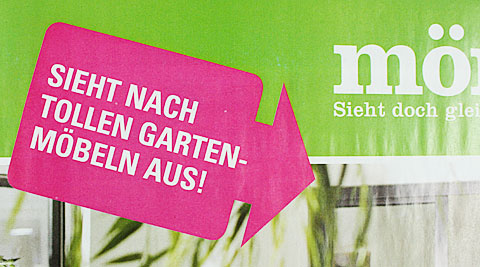 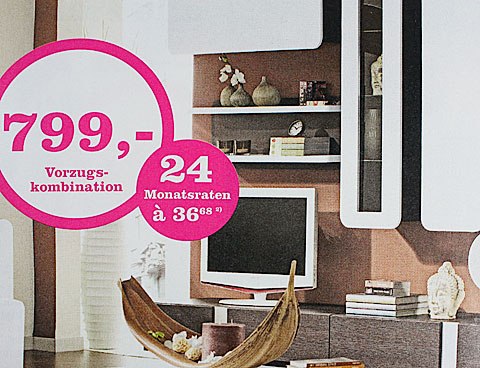 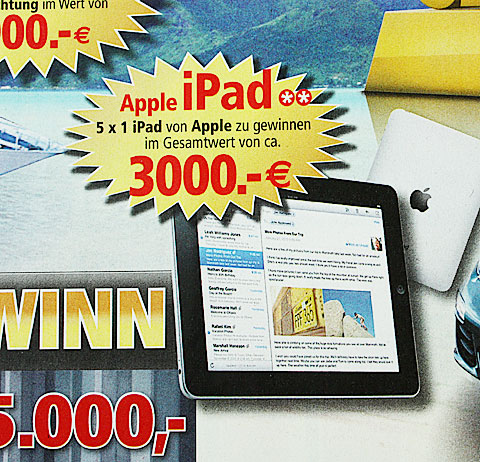 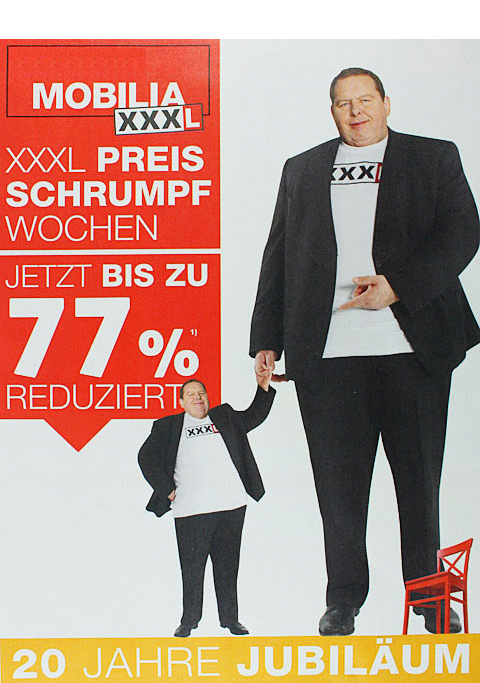 All pictures: Various presentations out of furniture-leaflets, photos: Stylepark 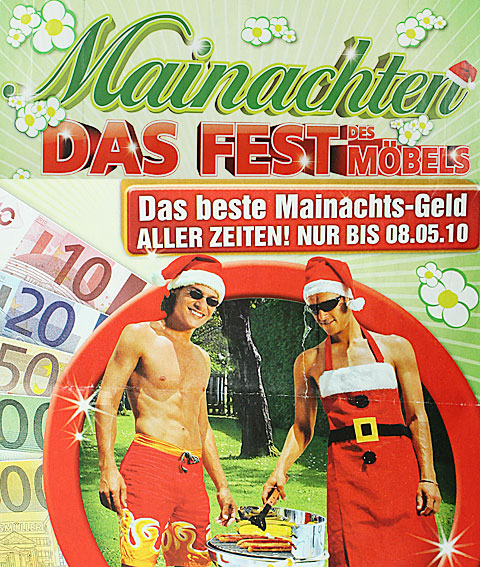 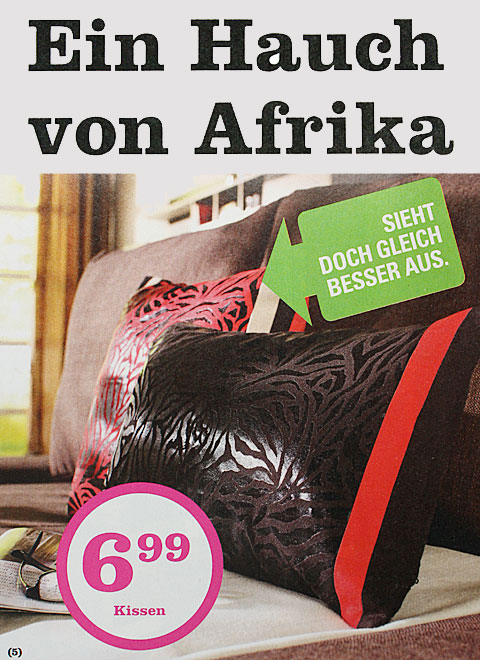 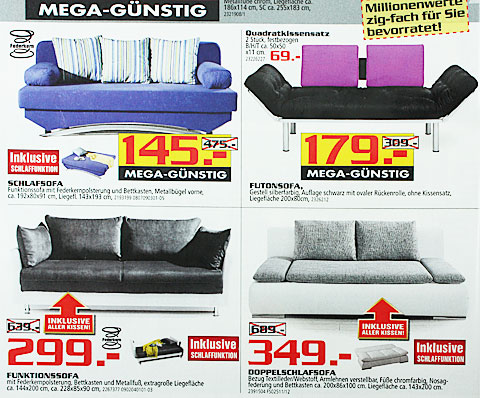 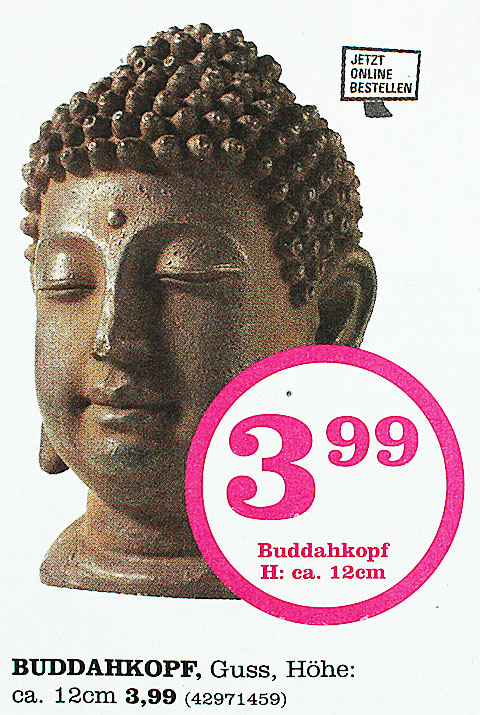 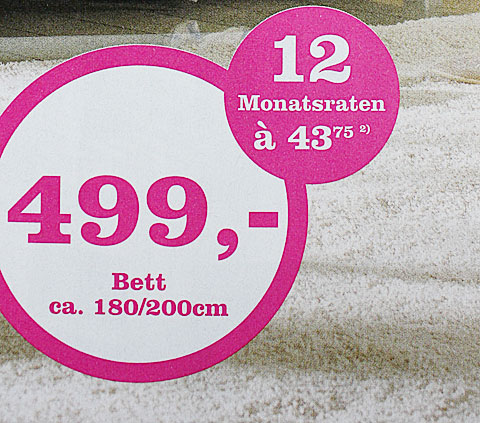 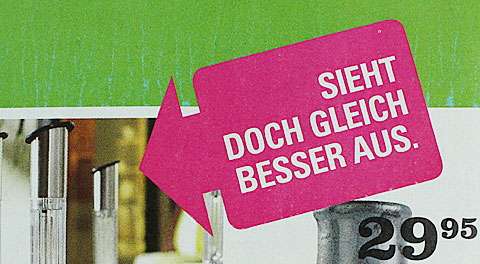