This text is by no means intended to lessen your enjoyment of football, let alone compete with the many wonderful poetic writings on the subject by the likes of Peter Handke or above all Ror Wolf. Not once does one find an exhaustive discussion of how varied or consistently the game of football is framed by design and in part driven by it. Yet design’s involvement in the sport it definitely exciting. For example, the very ball itself is a highly complex construct of engineering and design expertise – and it’s not just about the fact that it smoothly absorbs all those hard kicks and the occasional punch by a fist, but also reveals almost fantastic aerodynamic features and is visible both in the stadium and on TV or other appliances. (Indeed, only a few years ago the influence of design was far more visible, as one could quite clearly discern on seeing the ball the famous geometric agenda put forward by architect and designer Buckminster Fuller, comparable to his renowned geodetic dome in Montreal.)

Given the arena and from the viewpoint of the players, another point of interest is surely that the grass pitch itself is very clearly cut in line with design guidelines; moreover, it is outfitted with lines to meet a clear graphic layout. And on the pitch people then run around who are visually distinguished from one another by design – denoting there are two teams and a referee. In fact, it is designers who developed the numbers and names on the back of the football jerseys, and the ads on the front. Not to forget that the flags used by the assistant referees, the referee’s whistle, the obtrusive and now usually electronically controlled ad banners, the seats, the VIP Lounge along with its interior, the entire signage system, the security measures, the signs and the stands for food and drink, as well as the latter themselves, are all expressions of design. More or less successful or smart.

2.
Admittedly, it is always a bit strange to start a text by pointing out what it is not about. Yet now and again it makes a lot of sense to do so, as otherwise one might be seen as being a bit one-sided as an author. This applies precisely to the following deliberations as they seem fairly marginal compared to the massive appeal of football games.
Nevertheless, this is part of it, and it is likewise the result of design and also shapes any team. Thus, every European Championship, like other tournaments across the world, is initially described by a logo that it more or less kitschy in appearance and often cites the usually just as ugly cup. Then the run-in program starts on the pitch: Various people scamper around in costumes (fashion design) on the grass, spread out pictorial worlds or simply leap or dance. In 2016, the green was maltreated with a huge version of the logo along with variants of the respective two teams’ jerseys that were just as large, and on top of all this, the national flags, too. These were fastened on respectively extendible and of course exactly designed structures such that everyone could see them and the very many men and women who rolled them out onto the pitch could then run around them.

To a certain extent it was quite meaningless to try and bring these statically fixed images to life be running round them – or it was an empty gesture. Meaning that these people, and this is definitely a problem, did not run around as such but rather function as a mechanism. In the hard-edged sense of functionality. Their idiosyncrasies disappeared in favor of a simple ornament. As mere particles and clearly structured elements they became a pale part of the image worlds that watch over them.

Now one supposes that these people actually really liked doing what they are doing. That may be the case, and after all, people often enjoy not being discernible as themselves or as people, but immersing themselves in an anonymous mass, or rather an ornament, and thus no longer being responsible or catching the eye with what they do. The community qua ornament erases all idiosyncrasy and responsibility. Within the ornament you are never guilty for what happens. Unless you abandon your role within the ornament. Because one thing is abundantly clear: The ornament only functions if everything functions perfectly.

During opening events, this type of situation expands to include the stands. For there, separated into individual blocks, the fans of both teams perform, and they do so in quite comparable formations. Depending on the team they support, they are all clad very similarly, namely with the accessories offered by the corresponding companies and of course designed by designers. Although one spectator may wear an ostensibly striking hat or extravagant make-up and another shorts and a T-shirt in the team colors – but no one in such a block seeks to be solitary, everyone waves the same scarves above their heads, moves in the same wave and sings the same songs. (In passing let it be noted that some research institute or other has actually established that you need at least 60-80 people to start the wave in such a way that others then join in.) Then the two national anthems are played and everyone from the corresponding country (usually this excludes some of the players, who just pretend to sing) sings along loudly, becoming part of the acoustic ornament.

3.
Now one could superficially term what is happening in these cases general enthusiasm and appreciate it as a social experience or an experience of sociality. As mere enjoyment of the event. If it were not for the awful heritage that is accepted in this way. After all, such an ornamentalization of human beings to form abstract masses is used by the military precisely to render everyone spineless and mindless, stripping them of any responsibility. Of any ability to think for themselves. This became the general fashion in the Hollywood films notorious for such scenes, in which almost hundreds of human beings busily set about losing any of their idiosyncrasies or characteristics as individuals in dance scenes and other mass scenes, manifestly enjoyed by all participants. In these films, the human beings become nothing more than a designed ornament and only have an impact in this way, their presence as human beings is quite arbitrary.

One could take this further and refer to Siegfried Kracauer’s very intelligent book on “The Mass Ornament”: “The ornament, detached from its bearers, must be understood rationally. It consists of lines and circles like those found in textbooks on Euclidean geometry, and also incorporates the elementary components of physics, such as waves and spirals. Both the proliferations of organic forms and the emanations of spiritual life remain excluded. The Tiller Girls can no longer be reassembled into human beings after the fact. Their mass gymnastics are never performed by the fully preserved bodies, whose contortions defy rational understanding. Arms, thighs, and other segments are the smallest component parts of the composition.”

Kracauer argued very cogently back in the 1930s that authoritarian regimes appreciated, ordained and insisted on precisely this transformation of human beings into ornamental structures. He explicitly analyzed this with reference to the Italian Fascists and the German Nazis. And to this day it sounds really shocking when German football fans all shout together, in deliberately deep voices “Sieg”, and the “Heil” is an echo in our minds. Or if one remembers the film “Triumph of the Will” or the 1936 Olympic Games – although, awfully enough almost all such Olympic Games (with the possible exception of those in Munich and in London) accomplished precisely this transformation of human beings into ornaments. Precisely as attractively designed and yet ipso facto (and sadly this is part and parcel of certain aspects of design) the deeply authoritarian structuring of people in a specific regularity and function. For the ornament, having one moment been composed from humans, conveys a sense of security and clear focus on a purpose. Nothing else calms the authorities more and unfortunately often at least for a certain time (in the context of an event) the people, because in this way relationships are clear for all. For permitting oneself individuality requires more attention, more responsibility and empathy – because it is somewhat more chaotic.

Yes, design is once again substantively involved in aligning people in this way. It develops the ornaments and the means needed to produce them. And unfortunately it does so in a manner that such essentially brutal organization fades in a world of good intentions. Not that this discredits football in and of itself. Football may continue to trigger enthusiasm and support, and probably does so precisely because it is in the final instance far more chaotic than all the smart strategists believe or would have us believe. For that is the true quality of the social dimension of both football and design: At the end of the day, uses are designed and people (hopefully) break out of the repeatedly planned and designed order.

He is an author, design theorist, corporate consultant, curator and organizer; he has been, among other things, CEO of the German Design Council, Advisory Council member of documenta 8 and Founding Dean (and until 2013 professor at) of the Köln International School of Design/KISD. Erlhoff was founder of the Raymond Loewy Foundation, is a founding member of the German Society of Design Theory and Research and as a visiting professor heads projects and workshops at universities in Tokyo, Nagoya, Fukuoka, Hangzhou, Shanghai, Taipei, Hong Kong, New York and Sydney. Starting this year, he has been honorary professor at the Braunschweig University of Art. 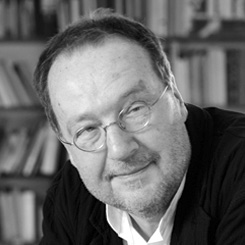