First came mass mobilization, closely followed by the need for somewhere to put all of the cars. With 500 million “surface parking spaces”, the USA has significantly more parking spaces than US citizens – small wonder given that there are over 800 cars to every 1,000 inhabitants. The space-consuming demands of individual transport are integral to an infrastructure that is geared entirely toward the car, in a place where you often can’t even get to the supermarket or to work without your trusty four-wheeled helper. Shopping, office and recreational centers surrounded by highways and veritable oceans of parking space are an everyday part of the “American way of life”. “They paved paradise to put up a parking lot,” as Joni Mitchell so eloquently described this sacrilege in one of her Hippie-Pop songs from the 1970s.

But what can we do about it now? Do away with cars? And then spruce up these big gray parking lots? Perhaps introduce new initiatives like the “Highway Beautification Act” of 1965, legendary yet only ever implemented on a very rudimentary scale, brought in by then Lady Bird, wife of Democrat Lyndon B. Johnson, the Democrat who presided over the “Great Society” – despite strident protest from the billboard industry. Would we then transform all of that leftover tin into shimmering gold? In any case, debates on the issue are certainly gaining momentum in the USA.

There is even an international PARK(ing) Day, established in 2005 by the San Francisco-based design office “Rebar”. The initiative aims to use creative parking-lot happenings and alternative design projects to encourage reflection upon the urban infrastructure. US landscape architect Peter Walker had prophesized the coming of a time when parking lots would win design prizes as early as 1991. Perhaps things really have come that far. In the context of today’s approaches to urban planning, which increasingly take their cue from the concepts of community and sustainability (as exemplified by the “High Line” in New York or the rediscovery of flowing rivers and green areas in urban settings), something seems to have finally “clicked”, a turnaround in the remodeling of parking lots.

Until now the pre-eminent question has been: What makes a good parking lot, if such a thing even exists, most importantly taking cost-reduction and logistics into consideration? The answer: Creating a particularly large amount of storage space on a limited surface area and keeping the route from the parked vehicles to the respective facility as short as possible, so that the driver has no problems finding his car again. For Americans, who are now being encouraged to get moving around on their own two feet with “walking initiatives”, the route from the parking lot to the building is often the only time they actually walk anywhere outside their homes. “In America, a pedestrian is someone who has just parked their car,” isn’t just a corny old joke.

In contrast to the construction specifications for multi-storeys, parking lots seem to remain the least challenging building task of them all. Not that designers and architects will get anywhere with exceptional design anyway in this regard: all it requires is few white lines to mark out the parking spaces, a few rows of trees, several concrete bollards, oh and not to forget the particularly garish streetlamps. As though there were no room for improvement on these eyesores. Or as British architecture critic Reyner Banham wrote about these transit points so radically limited in their expediency: Parking lots are loved for what they are, for doing their “parking lot thing”.

In principle, those sprawling, barren parking lots that – driven by greenfield developments – have transgressed into numerous American towns and cities are even worse than the “carscapes” that pepper the spoilt American hinterlands, where a laissez-faire attitude often leads to subsided off-the-rack developments. This phenomenon is called the “Pensacola Parking Syndrome” and refers to the sheer insaneness that these shrinking cities are tearing up used land so recklessly, using the cheap plots to build a parking lot. One would hardly believe it but today the surface area of some American ghost towns consists of one third parking. It costs less to maintain these dead concrete wastelands, which in their desolation stand like monuments to a lost urbanity, than it does to conserve historical buildings or to look after green spaces and parks.

So it’s high time to apply that good old “let’s have a rethink” cliché, with which Americans are now increasingly regarding these long-known sins of modernity such as suburbia and megamalls, while firmly adhering to their beloved life model driving SUVs and living in detached houses, to this parking lot misery. At any rate, with his new book “Rethinking a Lot – The Design and Culture of Parking”, US urban planner and Professor at the prestigious Massachusetts Institute of Technology, Eran Ben-Joseph, wants to spark a little more imagination in the design of parking lots. Ben-Joseph suggests that no further thought has been given to these omnipresent footprints since mobilization began in the 1920s. In his opinion, what is lacking is – among other things – the “placing” of parking lots in society, not just accepting them as a necessary evil, but creating them according to a conscious design that positions them as the entrance to a company or institution, the likes of which have today become inconceivable without cost-effective open-air parking lots. An attempt to move in this direction has already been ventured by renowned US architectural firm, Michael Van Valkenburgh, as early as 2001 with their redesign of furniture manufacturer Herman Miller’s company site in Cherokee County, Georgia. The resulting 550-car capacity parking lot has since been honored with a series of award. But at the end of the day even an haute-couture parking lot like this one remains just that, a parking lot, whether they have been a little more inventive with the lighting or not. The same could be said of the parking lot designed by Zaha Hadid in the French commune of Hoenheim. Even the star architect’s magic touch somehow seems to flounder when it comes to gray asphalt wastelands.

Another development cropping up more and more often when it comes to redesigning of parking lots is the transformation of previously paved surfaces into green areas, resulting in more environmentally-friendly water drainage and likewise preventing the asphalt from reaching desert-like temperatures in the summer. The symbiosis with solar technology also appears to be an attractive option here; where solar awnings provide the parking lots with shade and simultaneously act as charging stations for electric cars. The almost natural, fairytale-like “Solar Forest” by Dutch architect Neville Mars continues to serve as a prototype for such designs, whereby cars are parked beneath shadowy “solar trees”. An entry for the 2009 creative competition “Think outside the Parking Box” the futuristic solar parking lot concept, “Solasis Light Tower”, boasts a gigantic solar tower, which is however almost frightening in its conspicuousness. In comparison the rather untechnical competition entry “Parking in Rainbows” not only appears significantly more modest, it is also much more jovial. This design illustrates that parking lots can work without angular rows of parking spaces, that they can be much more colorful and cheerful too.

It is such an aesthetic, and social vitalization of these “lost spaces” that urban planner Ben-Joseph champions in his call for action: Parking lots could be better integrated into the local community and society as a whole, were we to look upon them as multi-functional sites, where flea or farmers’ markets, theater performances or sports competitions could be held on the weekends, for example. It may sound all well and good, and this is indeed already happening across the USA, albeit without implicating many permanent changes to these gray blots on the landscape. But people certainly aren’t afraid of these concrete wastelands: At lunchtime, office workers can often be seen stretching their legs among the maze of vehicles. At the weekends, these asphalt surfaces allow parking-lot windsurfers to engage in their unusual hobby. Another popular pastime is “tailgating”, whereby parking lots provide a perfect setting for a get-together to grill a burger or two before major sporting events. And “boondocking” is the name given to overnight camping in customer parking lots belonging to the retail giant Walmart; while such large parking lots have been the preferred stamping ground for food truck operators for many years now. In principle, more uses for the sheer mass of existing parking space are barely conceivable.

There has never been a lack of art projects eager to use these “lost spaces” either. In 1977, as part of their famous “Best” shopping-mall design in Hamden, Connecticut, the outstanding architecture and art group “SITE” built a “Ghost Parking Lot” – where concrete-covered car wrecks sprung up from the ground like mushrooms. While Meghan Eckman recently provided an almost nostalgic consideration of the parking lot as a phenomenon of city culture in his film “The Parking Lot Movie” (2010). Here, Eckman documents day-to-day life at a parking lot in Charlottesville, Virginia. For 20 years the parking lot’s owner has been using it as a kind of interactive art house cinema only employing students and alternative hedonists as parking attendants, and with this small-town rebellion he succeeds in creating a form of social coexistence that opposes the sterile anonymity of the spoiled world that surrounds him. As convincing as this attempt to win back the urban space is, it is no more than playing doctor, trying to “treat” symptoms. The sea of parking lots that flood the USA will most probably become considerably uglier before its citizens become fully aware that in their society there is another area, in which a revival is long overdue – the promotion of public transport! 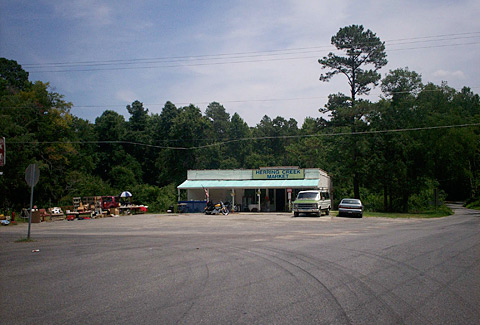 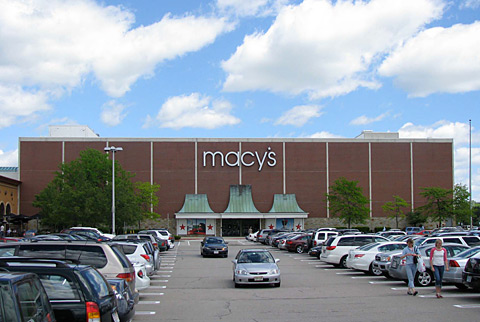 The shortest route possible: in front of a entrance to the Macy’s store, photo © Nora Sobich 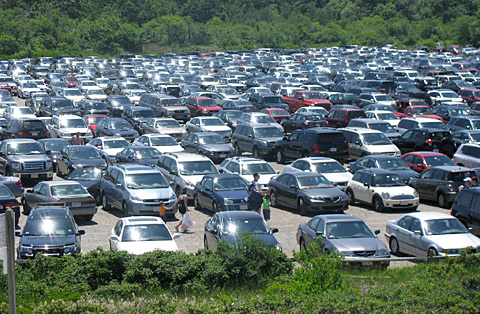 An abundance of parking spaces in a confined area in Crane Beach, Massachusetts, photo © Nora Sobich 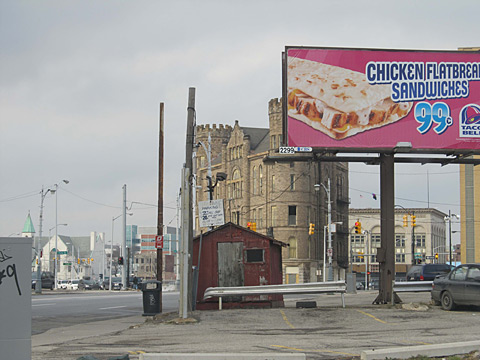 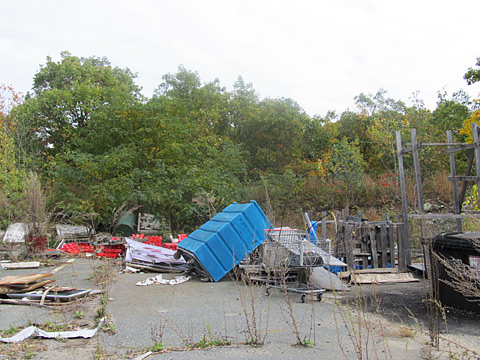 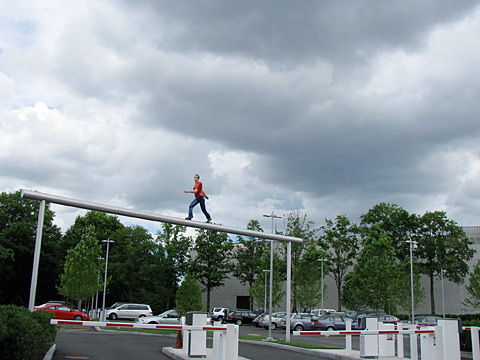 In front of the Museum of Fine Arts Boston, photo © Nora Sobich 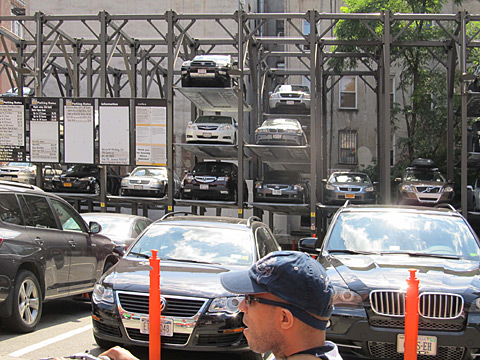 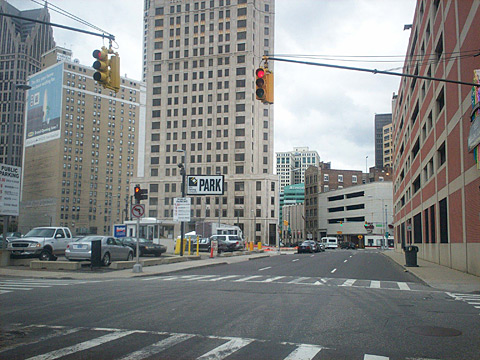 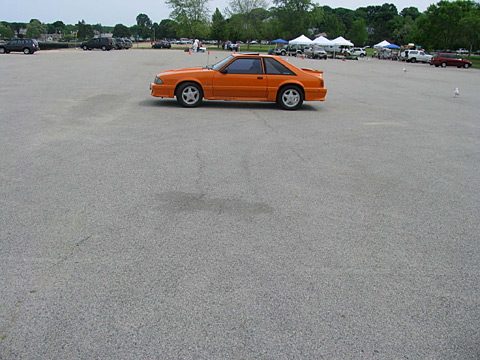 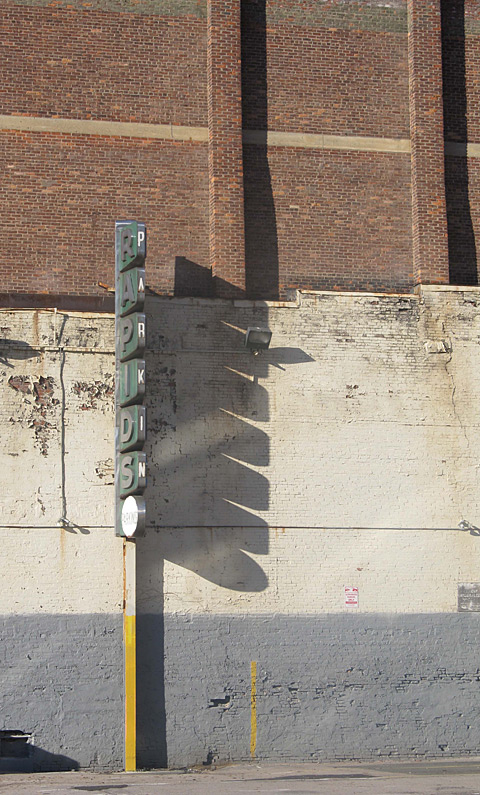 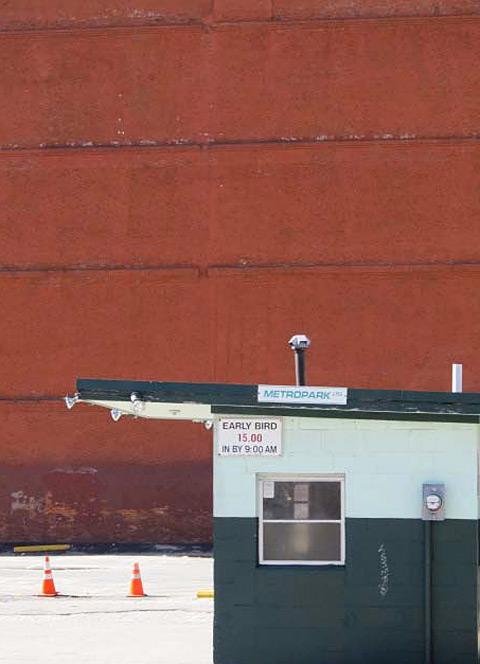 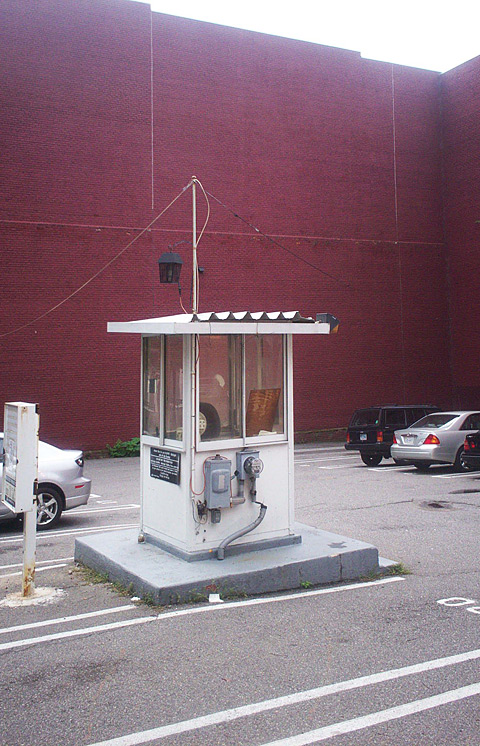 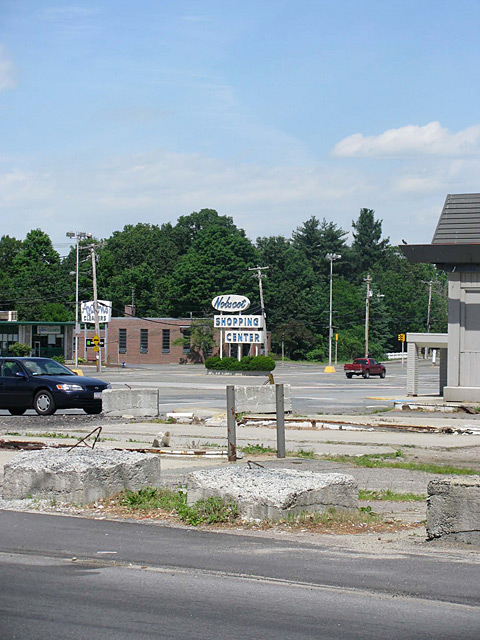 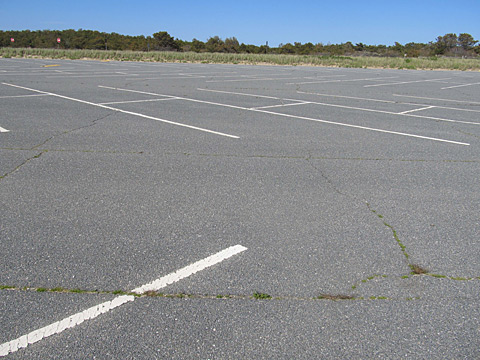 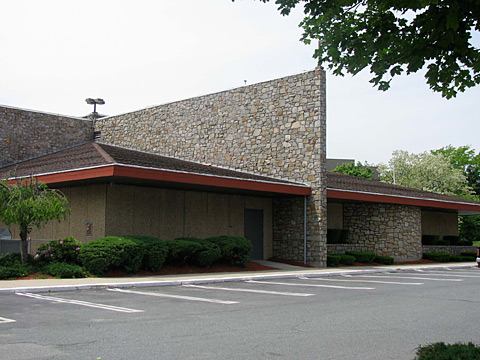 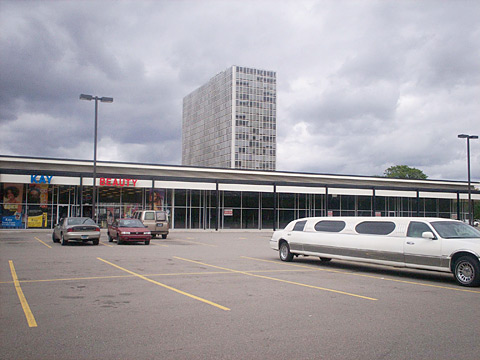 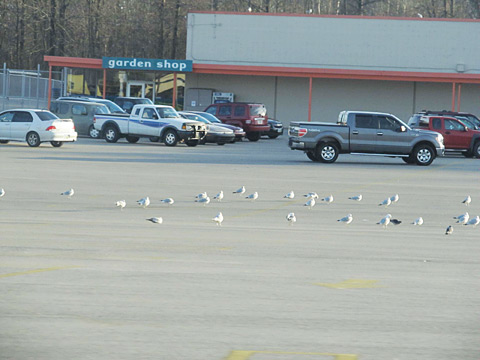 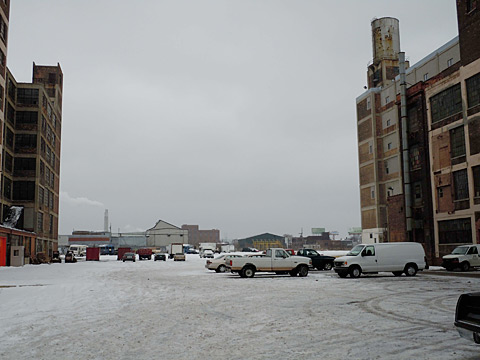