top
Cosmos with Robotzki or light in every corner
von Thomas Wagner | Apr 19, 2010

There has never been that much light! This is not because one of the world's leading trade fairs, "light+building 2010", which is at present taking place in the halls of the Frankfurt Exhibition Center with 2,177 manufacturers, is showcasing such a vast number of table and floor lamps, wall and installation lamps, chandeliers and street lights, switches and installation material that we can hardly grasp them all. But because there has never been such a great variety of technological and aesthetic solutions for converting darkness with all its ghosts and perils into a bright light world that is clean and clear at all times. When taking a tour of the dozen halls and hundreds of stands, you repeatedly get the feeling that the demythologization has only just been completed and that we are now about to enter the new Age of Enlightenment. In a place where general illumination spreads to such an extent and in which the light of reason has become a question of technology and design, the famous "Daynight Lamp" by the poet Christian Morgenstern is more distant to reality than it has ever been before. After all, it is based on the fact "that, indeed, when switched on, the imagined lamp turns the brightest day into night". On the contrary, today anything which when switched on immerses everything in bright daylight is considered a luminaire.

LED is the sensation

At least in cities and the comfortable townhouses houses their inhabitants reside in, there is always light. Yet, ceilings and the sky are not twinkling with little stars but with a whole host of LEDs. The small, energy-saving light-emitting diodes are, without doubt, the sensation of this year's trade fair. In contrast to so-called OLEDs (a variant based on organic materials and still in its trial phase), almost every producer offers one or the other type of LEDs. Only Ingo Maurer continues to look into the future with the table lamp "Double T. Future" and a pendant variation of it, "Double C. Future". And that is where the problem starts. For since the EU bureaucrats in Brussels have banned the good old light bulb, the little LED lamps illuminate everything down to the tiniest corner. Everything is to be lit, nothing to be left in the dark. No table, no edge, no little niche or stair. As a result it is exactly because every single small luminaire supposedly saves energy, from the point of view of space, our planet earth is surely becoming lighter and lighter.

The fact is that despite great efforts to adapt the spectrum of light LEDs emit to the warm tones of that of a light bulb, the light of the former still appears cold and artificial in most cases. And even if there is one or the other convincing aesthetic solution, there is still a lot to be done. All too often, the luminaires look like shower heads rather than lamps that spread light instead of water. Meanwhile, unmoved by any of this advertising still speaks of "technology", "elegance" and "efficiency".

There is nothing left to be desired

Aside from this energy-saving bathing in light, we can find pretty much any shape and style, even though some important manufacturers will not present their new products before the trade fair in Milan or have not come to Frankfurt at all. Yet: Just like headlight design in automotive manufacture, light becomes ever more variable and dynamic at home, in the office as well as in public spaces - both inside and beyond all casings and guises in which it comes. After all, light can serve more or less any purpose: It can illuminate indirectly, create certain moods, directly spotlight all kinds of knickknack or partially or entirely illuminate a room without revealing to us the necessary source of light. And, since lamp shapes have been designed according to the mood the luminaires are supposed to create, by putting into place luminaires of any desired shape, we can satisfy our longing for a Baroque existence with enormous chandeliers or cascades of glittering little stones just like we can afford the luxury of renunciation or express our love for nature with biomorphic, branched and ramified shapes. These resemble little trees with luminescent leaves or blossoms at times and like opulent umbels or corals at others. Even "Led Net Line" and "Led Net Circle" by Michele de Lucchi and Alberto Nason for Artemide point in this direction. Since ecology and high technology have allied, drop-shaped designs have become popular time and again.

One can basically differentiate between two extremes in how designers deal with light in an aesthetic way these days, with numerous hybrids of the two existing in-between. The first extreme does not rely on the quality of the light alone but focuses, above all, on classy, ebullient decoration, sparkling, twinkling materials, ever lager, ever more protruding lamp shades and caps and luminaires that are enlarged in scale and oversized. We get an idea of how this can look when Hani Rashid pays his respects to the Sun King Louis XIV for Zumtobel and translates the opulence of his chandelier into our time or when serien offers an XL version of its table lamp "Slant". In recent years, we have already seen similar products. It is necessary to have a real weakness for this new decorative opulence in order to like it. The same holds true for the entire trend towards sparkling glass, polished metal and all types of shimmering cloud-shaped structures.

In contrast, extreme number two is all about the light itself and about making what we call a luminaire take the stage in a manner as reduced as possible in terms of shape and material or even make it disappear completely. So that all that remains is nothing but pure, often colorful light. We can find these designs among the hardly manageable amount of recessed luminaires as well as among the products of producers such as tossB (whose lamps are reminiscent of the 1950s) or IP44 (with a touch of purism) or in the combination of an illuminant and a sensor-controlled pedestal by senses. Sometimes, we are surprised about how refreshing some classics, e.g., in the case of Tecnolumen, can appear in light of the dominance of the decorative aspect.

Among the numerous hybrid forms that exist between the two extremes, there are a strikingly large number of luminaires made of textiles or paper; they suggest a renaissance of the Japanese Akari lamp we know from our time as students - of course, a high-tech version of it. However, whether light and lighting have become "better" or simply "more decorative" as a result of this great variety of products, I do not know.

Instead, we are staging light in an ever more sophisticated way to create certain atmospheres. However, amid the Copernican revolution in the sector, as it were, with a trend towards energy-saving lamps, it is striking that the amount of electrical energy they save is often compensated for aesthetically in the form of a great enthusiasm for decoration. "Staging through light" only describes one side of the medal. On the other hand, we find the "staging of light" in the form of the luminaire. Here, a kind of spherical light for use in every part of our comfort glass houses seems to be particularly appealing and can create any desired atmosphere. Italian company Album takes the spherical aspect all too literally, serving up an entire universe ("Universum LED"), a cosmic series of luminaires called "Komet" and "Pluto", "Erde", "Mars" and "Neptun". It consists of celestial bodies enveloping tiny luminescent dots. Unfortunately, the latter are nothing but pretentious kitsch. Since the future of our planet has become doubtful, we seem to like a cosmic atmosphere at home. After all, with "Copernico suspension" by Carlotta de Bevilacqua and Paolo Dell'Ellce, Artimede is offering a spherical model that consists of ellipsoidal luminescent orbits, and a design by Joachim Manz from 2008, the pendant luminaire "Trabant" whose concrete orbs (these are dusted in air pockets) look like models of the moon, is part of the assortment of Tecnolumen. Thus, the awareness that we are part of the cosmos hangs above our dining room tables ever more often; the more so as the type of cosmic radiation emitted is completely harmless.

It is, once again, Ingo Maurer who has succeeded in impressively combining innovation with wit and original solutions. With WoonderLux, a low-voltage LED bulb by Ingo Maurer and Axel Schmid, once more, the past master pays the light bulb his respects in a manner that is as unique as it is ingenious. Radarrr, which he developed in cooperation with Tobias Reischle, works on the reverse principle of that of a solar furnace, and Looksoflat seems to live up to its name: While it looks like a classic office lamp with a hinged bracket from the side, on closer inspection its shade turns out to be nothing but a silhouette equipped with LEDs. In the end, it is an anglepoise by Benedikt Achatz for Ingo Maurer that makes the ultimate statement on the omnipresent mania for control and remote control systems (with his "control section" Luxmaite Ciria, for example, Matteo Thun designed a control unit modeled on the IPod with its click wheel). It has the beautiful name Robotzki and we cannot be sure when it turns its luminescent eye on us. Maybe, light robots will be the next innovation. After all, there is already one of them. For the purpose of enlightenment and humankind's escape from self-inflicted lightlessness. 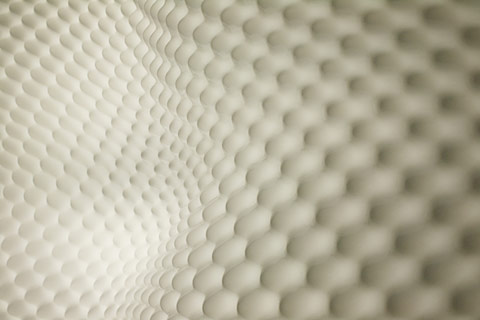 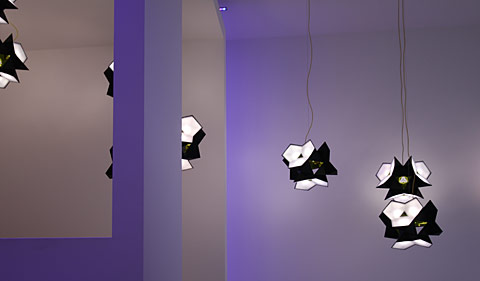 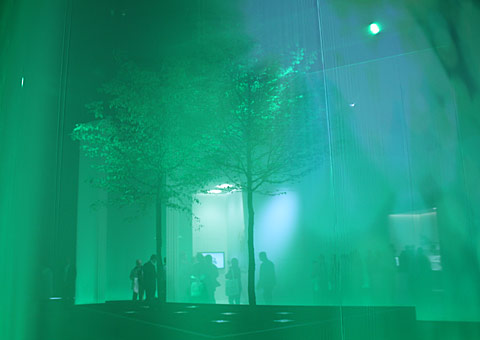 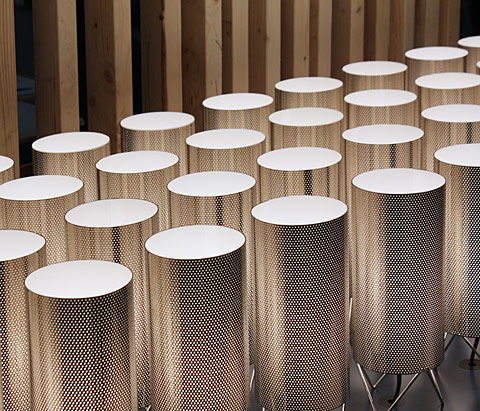 PD Leuchte by Barba Corsini for BestLite by Gubi 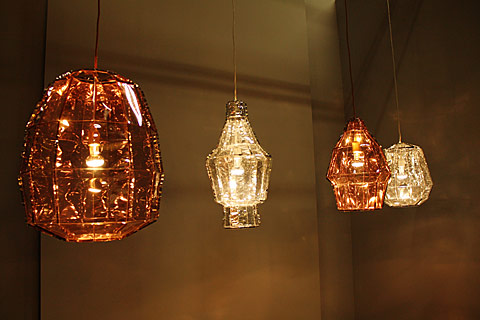 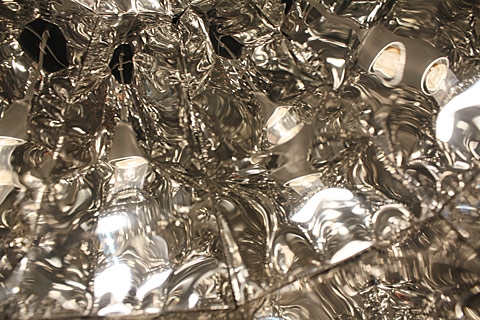 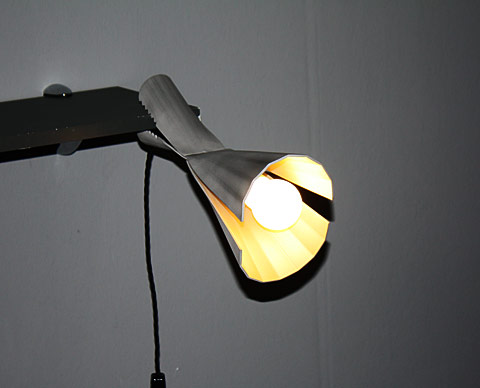 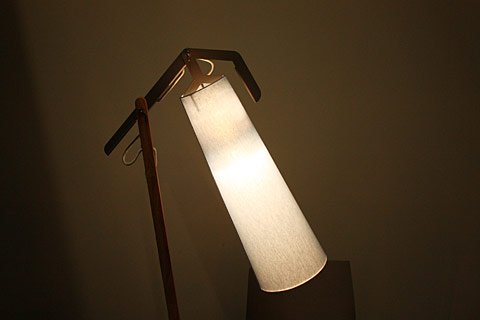 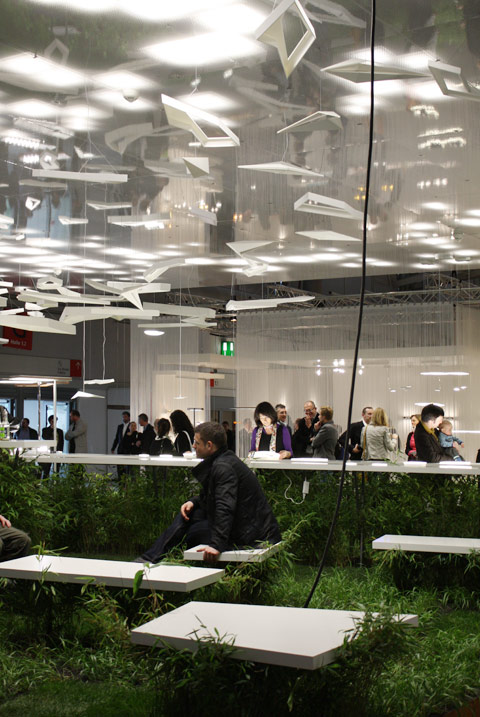 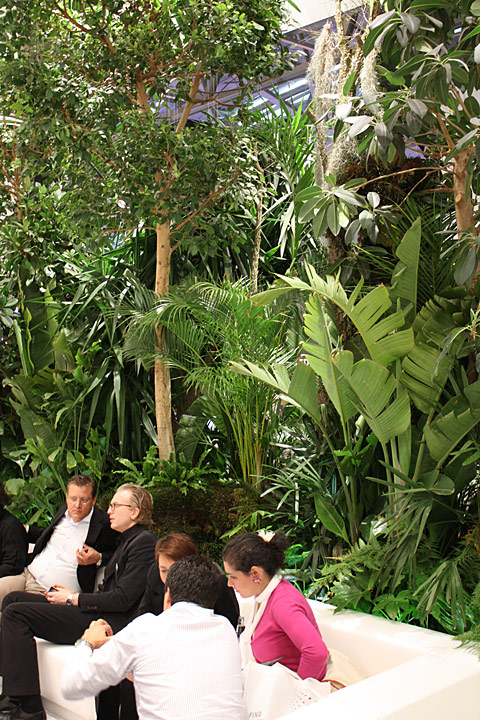 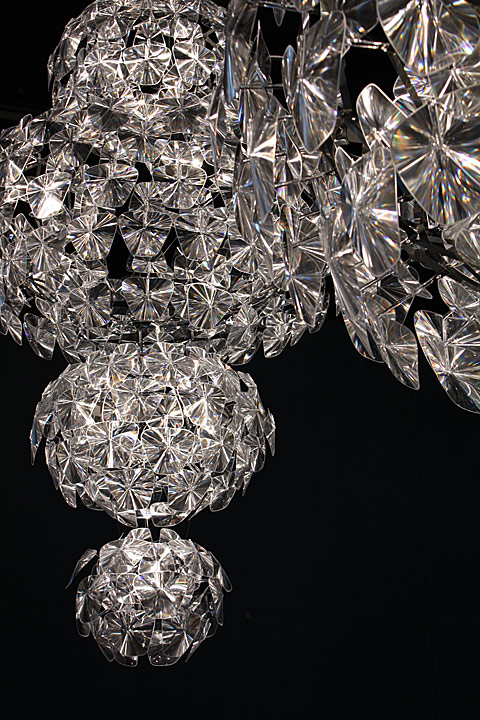 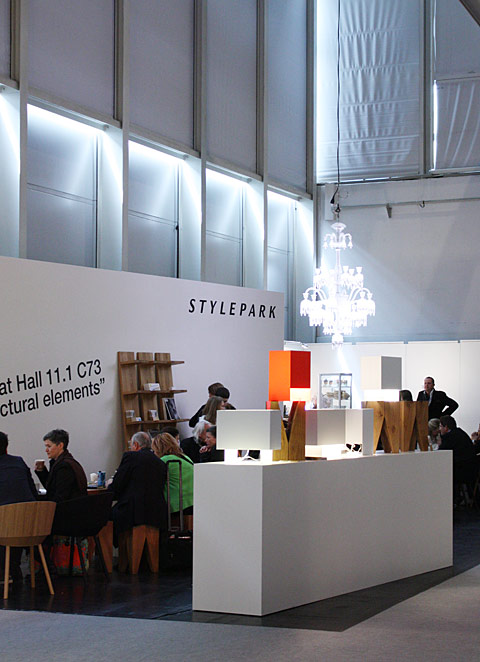 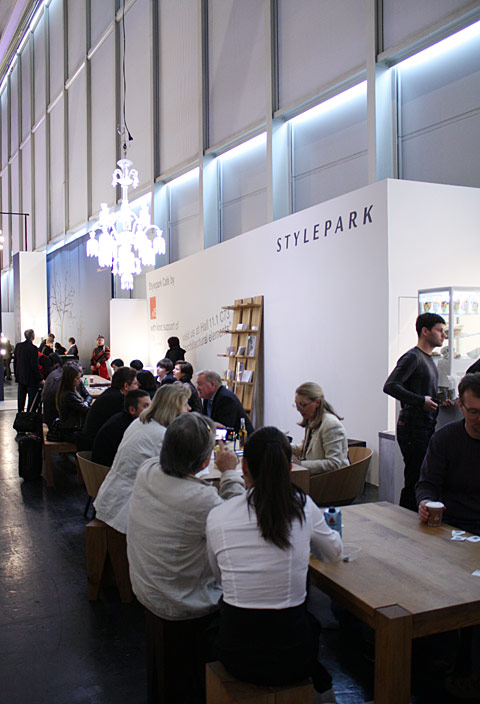 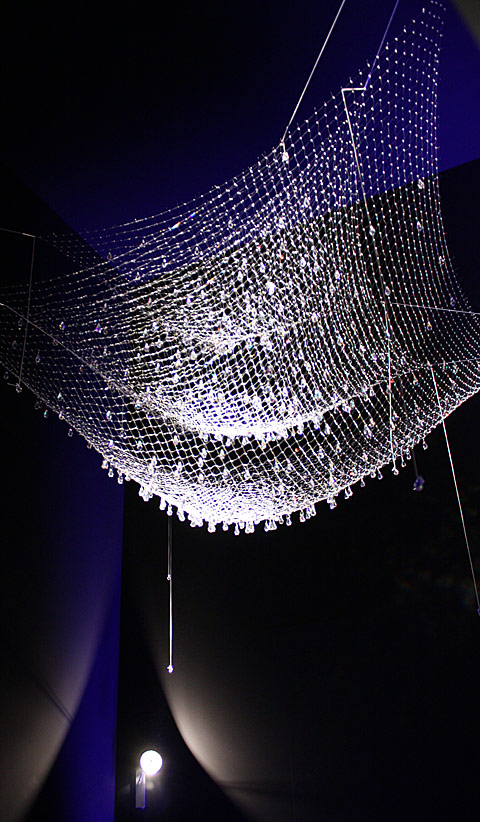 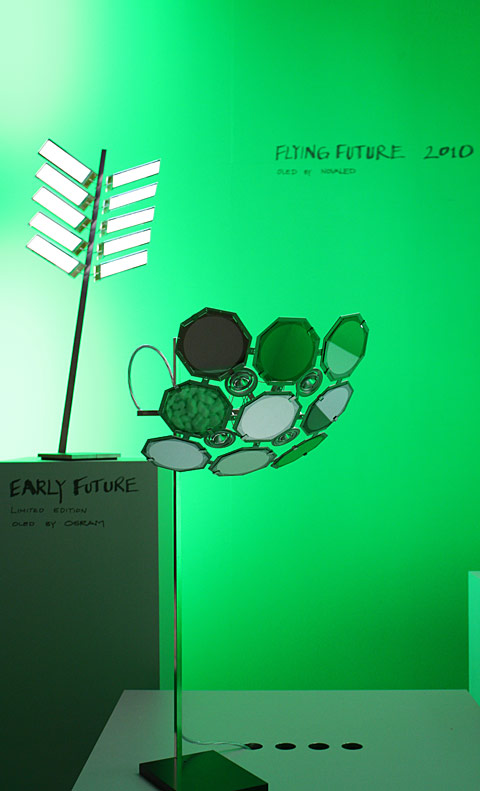 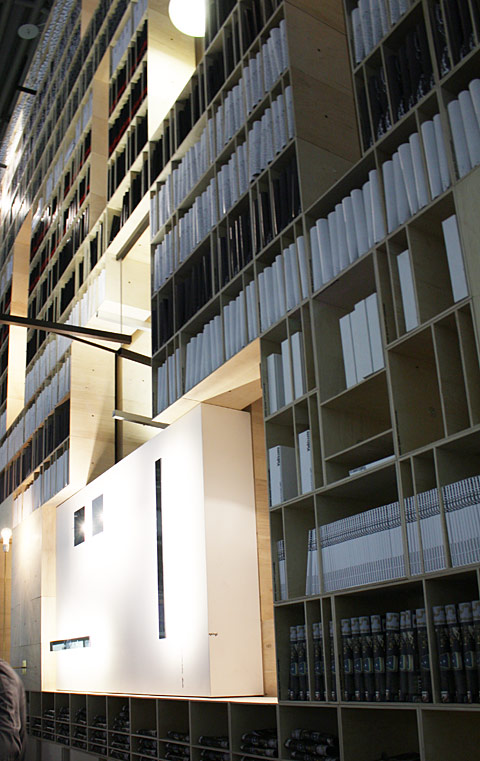 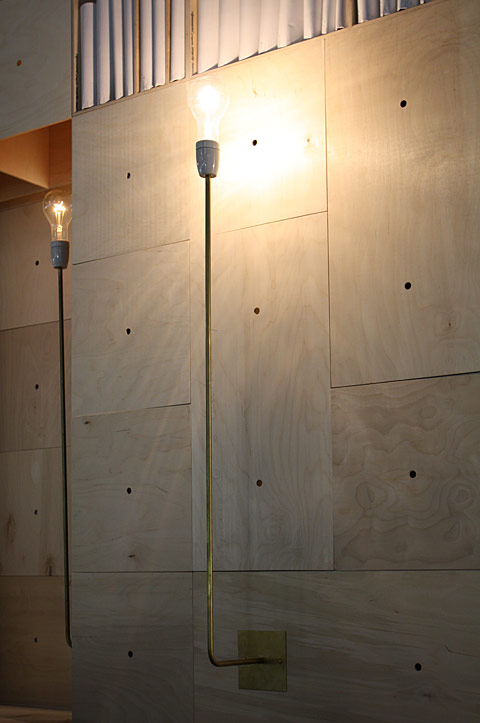 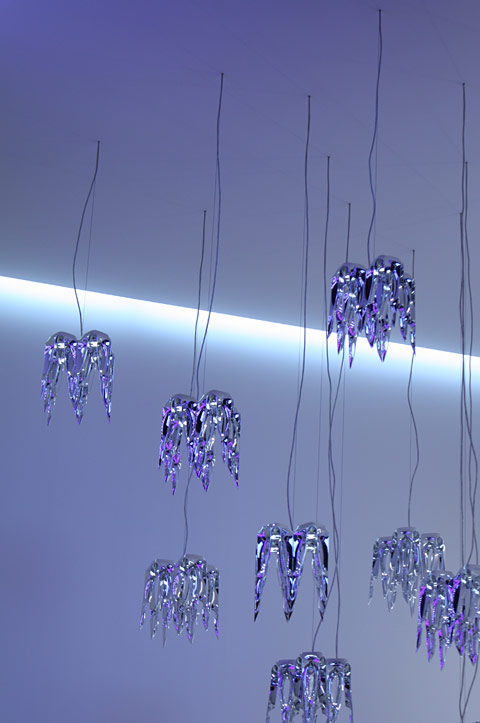 LQ-P by Hani Rashid for Zumtobel 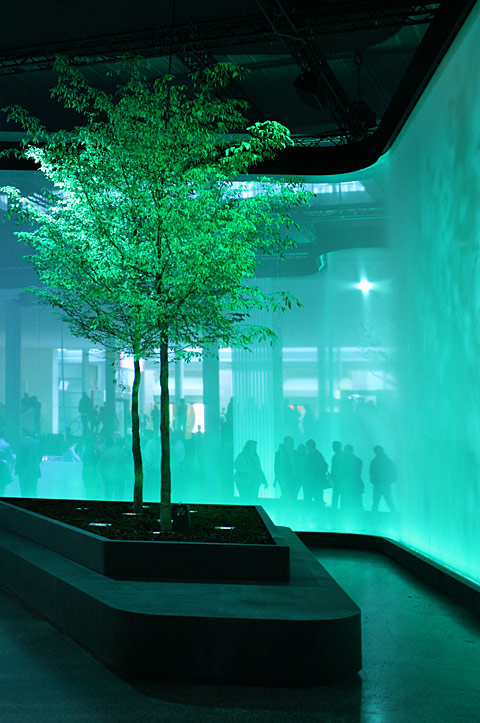 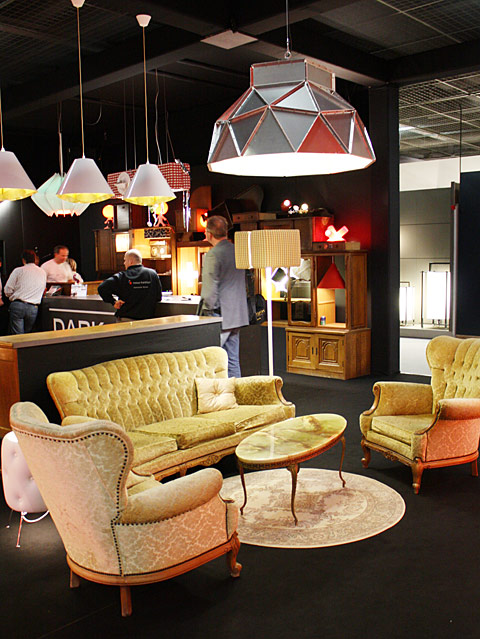 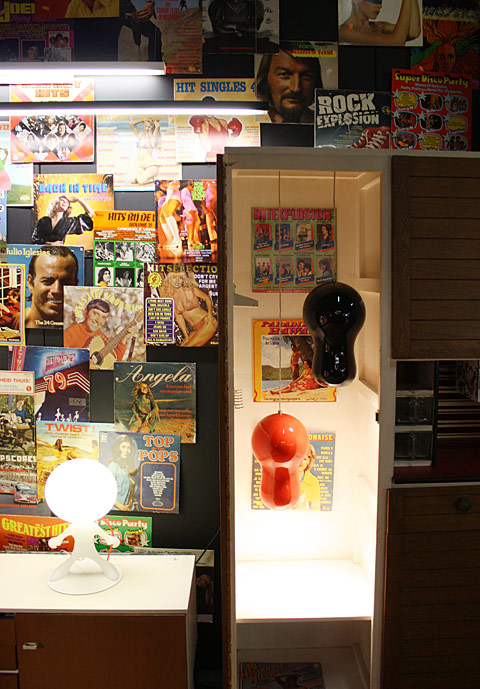 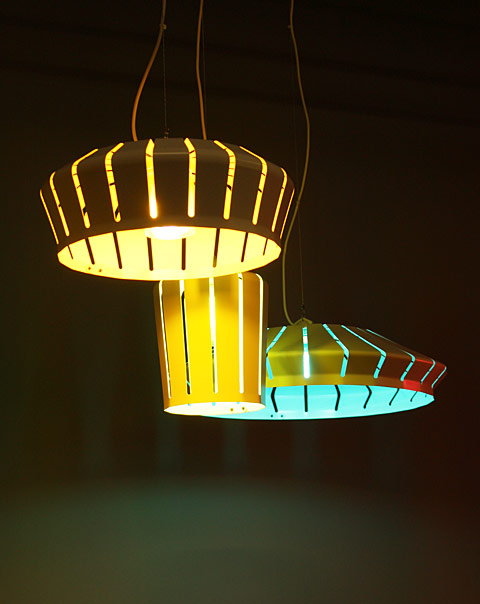 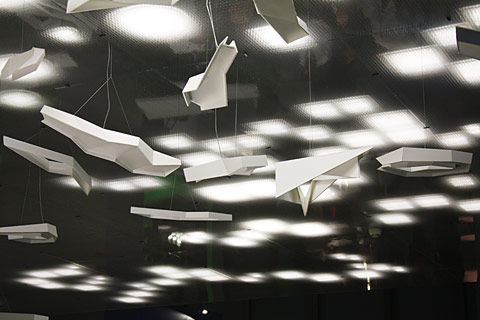 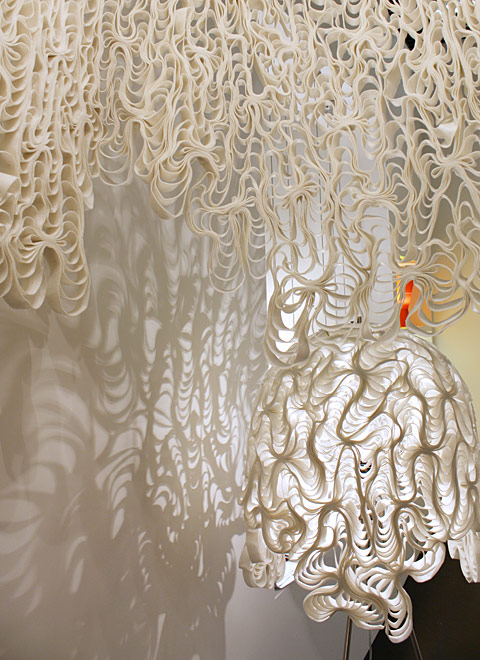 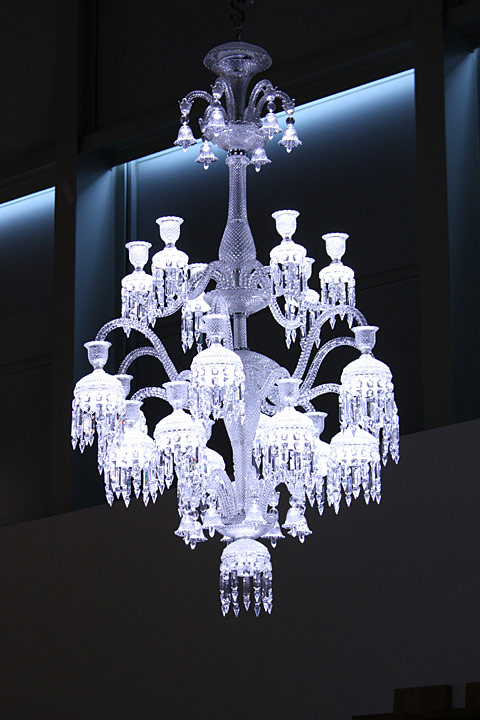