It may be coincidence or luck, intuition or simply just the eye, clouded by popular cliches. A journey through Germany as a design country, definitely not a representative one and equally random. And once over it confirms two things: Design is created in the environment and the atmosphere of the designing agencies and the regional cliches of wherever they are based. This, in turn produces a design which incorporates decidedly regional traits. Is this really possible in an age of global design and cosmopolitan fuss? One always assumed that design predominantly flourished in those spaces which pay tribute to pure objectivity, the rational mind, and simple chic. Quite wrong.

The surprise starts in Berlin. With all due respect, the seat of government is not a place where design can be created. No. Creativity, creative minds, anywhere but in office. Which is where administration takes place, but design is done in a design office. Order, clarity, strategy, process, now these are the catchwords one normally operates with. Nevertheless, the capital boasts an Amt für Gestaltung (Bureau of Design), albeit not that officially. In Berlin, where else? In a city in which everything assumes an ironic twist. It is run by designer Cäthe Pfläging, who has been involved with visual design since 2003 with a focus on web design and programming. "We chose the name," the self-professed Berliner says, "because we stand for Berlin design in its purest sense. With the necessary dose of self-deprecation and brashness we straddle the territory between poverty and sexiness," she says, playing on the words of the current lord mayor. It goes without saying that the office's interior is not terribly official. But this does not mean that clients don't receive a good clean design. The Berlin Philharmonic graces the client list as do hospitals such as the Charité and other interesting social or cultural institutes along with a whole host of small and medium-sized businesses. Extremely serious, inspired and professional: This can happen in Berlin even without the ambience of nobly designed interiors.

Stuttgart - Home of the engineer

In Stuttgart, meanwhile, irony appears to be completely lacking. Here Phoenix design is at home in Kölner Strasse, a company that has been decorated with hundreds of Red Dot and iF Design Awards, and is up at the top of many a ranking list. "Logic, ethics and magic" is the magical formula deployed by the successful office, established in 1987 by Andreas Haug und Tom Schönherr. An icon of German design, you could say, it delivers such perfect German engineering virtues as can probably only be found elsewhere in Swabia. And this is how the rooms look, too. Clean, clear, orderly. No-one would be surprised to see designers drawing with scalpels. But in fact clients really benefit from this austerity. The Stuttgart-based designers definitely did their bit to ensure the survival of Loewe, manufacturer of high-quality televisions and hi-fi systems whose brand image and product design have been created by Phoenix for years. Just as other brands for whom Phoenix works are a symbol of German industrial design and German entrepreneurship: Bosch, Gira, Junghans, Lamy, Miele, Siemens, Viessmann, to mention but a few. And you could almost say, as with the good old Volkswagen ... they just keep on running and running and running. But seemingly it is not just traditional German brands who gather here, top world players also abound in their respective segments. So "made in Germany" could also mean "designed in Swabia". And thus it goes without saying that business in the office is pretty orderly, and only images which show this make it outside.

When it comes to agency glam, Hamburg should certainly not be at the back of the queue. After all, the city never tires of praising creative achievement as a special phenomenon of the northern metropolis - beyond the slightly grumpy curtness which is rumored to be a Hanseatic trait. The Feldmann+Schultchen office has been in business for quite some time and is difficult to categorize completely in any particular design segment. The Hamburg cult beer, Astra, received a new image from Feldmann+Schultchen. Packaging such as the multiple prize-winning packs for German fishpackers "Deutsche See" or the service architecture of Europcar also hail from the design office - with its pontoon base. Here especially, we understand the use of spatial features to foster the workflow. A pontoon was rented for this purpose, and rocks back and forth on the waves of the Elbe. "Before that" reports Arne Schultchen, one of the founders," we drove out of town to gain a new perspective of our tasks. Create a bit of distance, gain new perspectives: You can do this much better when you're moving." So he says, apologizing. In the end it sounds a lot like ad agency talk, increasing productivity through group activities. But according to Schultchen this is not the goal at all. In any case, the location sort of developed without planning. Working with a blackboard also does not seem particularly hip for the 21st century. But here new forms of design are definitely being developed. These deliver completely new methods, new paths and thus new results, thanks to the working atmosphere. Happy interaction reigns where Hamburg advertising people still recognize the "blood groove" namely that strip along the wall of the presentation room where boards can be stood in sequence to convince customers. Presentations but also meetings and workshops are no longer conducted lecture-style here. Instead, those present wander around and discuss the ideas and sketches, thoughts and approaches - rejecting, postponing, rearranging and adjusting. "And what does it matter if somebody disappears, wants to gaze at the water, or into the open fire - to think about something?" asks the boss rhetorically. It stands to reason that German traditional brands possibly with strong ethical overtones and paeans to design legitimacy are not being created here: It is not strict enough, not old-school moral enough, and certainly not humorless. Small wonder that Hamburg's cult beer Astra got its new image here and some customers got new beer crates. Also packaging such as the multiple prizewinning packs for fishpacker "Deutsche See" come from the design office with the pontoon feel. But you can't have all this without a large shot of engineering - despite the rocking good-mood-island on the Elbe and its open fireplace.

Design could hardly be more zeitgeist than in the design office of 3deluxe in Wiesbaden - not exactly the city you instantly associate with high tech, interdisciplinary work and the blurred boundaries between graphic dramatization and architecture. Nevertheless, it can by no means be omitted if you are talking about atmosphere. It is hard to imagine more will to design, more desire to create artificial places, where the dramatization at times actually bids farewell to the dramatized content. Than at 3deluxe. The glass cube which was hotly discussed in 2007 as brand architecture for glass manufacturer Leonardo offers a particularly high profile. After all, purist architects are reluctant to accept this kind of dramatization as a structure. Professional critics occasionally sense the betrayal of Vitruvius's architectonic legacy. The future inventors from Wiesbaden are not affected by this. This may be due to the fact that neither the address nor the choice of location allow you to draw conclusions about their work. The biomorphic, winding, oozing, aspiring and by all means flexibly sprawling buildings, places, shops and other evocations of the future all exist behind old buildings with brick facades and high ceilings. Inside there are stacks of notes, paper models on desks, mess and plenty of analogue material in the midst of all the digital designing. And what is more astonishing still are explanations which Dieter Brell, one of the figureheads of the successful team offers: "Under no circumstances do we want to be a classic agency in a villa - as is so often the case here in Wiesbaden. More crucial than the rooms, the interior, the design and all that, are the people, the mood, the atmosphere which derives from people working together" So he says, then retracts a little, qualifies, downplays but then finally means, "What rules here is a rather pleasant mess which all our visitors instantly find congenial. Clients, on the other hand, are surprised. According to co-founder Brell no-one expects this kind of ambience. He adds, "We simply pay more attention to how people work together than to how the lighting fits in."

Several attempts to get information on an equally young, well-known and rightfully successful design studio in the Munich district of Glockenbach in order to shed light on what life is actually like for creative designers, are in vain. Another attempt. Nothing. Repeated pressure. Still nothing. What goes for all of Bavaria appears to be the rule here as well. Being alone with yourself is beautiful. There's nothing like home. 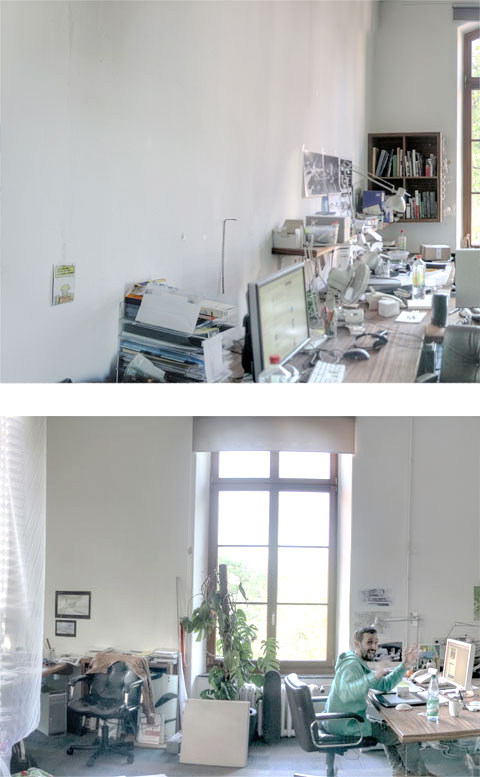