Imagine it’s summer and the sun is shining. Is there any reason why we should differentiate between indoor and outdoor furniture? Just like in the good old days, when in good weather people simply placed their kitchen chairs with the wicker seats on the patio, “Ahnda” by Stephen Burks for Dedon wants to be understood as a design concept that effortlessly resists any such distinctions and makes itself – and us – feel at home in-between the changing functions. What matters most, however, is that you sit comfortably, the workmanship is sound and the material delivers on its promises in al-fresco surroundings, too.

So for “Ahnda”, a lounge or wing chair, Stephen Burks had dreamed up a kind of transparent upholstery. The impressive comfy chair with loosely woven seat cushions is made by the crème-de-la-crème of Dedon’s weaving experts in the Philippines. Woven from soft bands that are made of textile fibers in different shades, the chair’s two-tone aesthetic lends it unique zest and refinement. The soft cushions that can be added for extra comfort form a striking contrast to the essentially transparent structure of the chair, which is available both with a high and a low backrest. A stool, a low table and several accessories round out the collection, which comes in to different color themes. If you like to relax sitting upright to read or have a chat with friends, then you will love “Ahnda”. Indoors, outdoors or somewhere in-between. (tw)

As the company Dedon after the editorial deadline on 3 April has announced, "Ahnda" will just be offered for indoor use only and not as originally indicated and described in the article above for indoor and outdoor purposes. 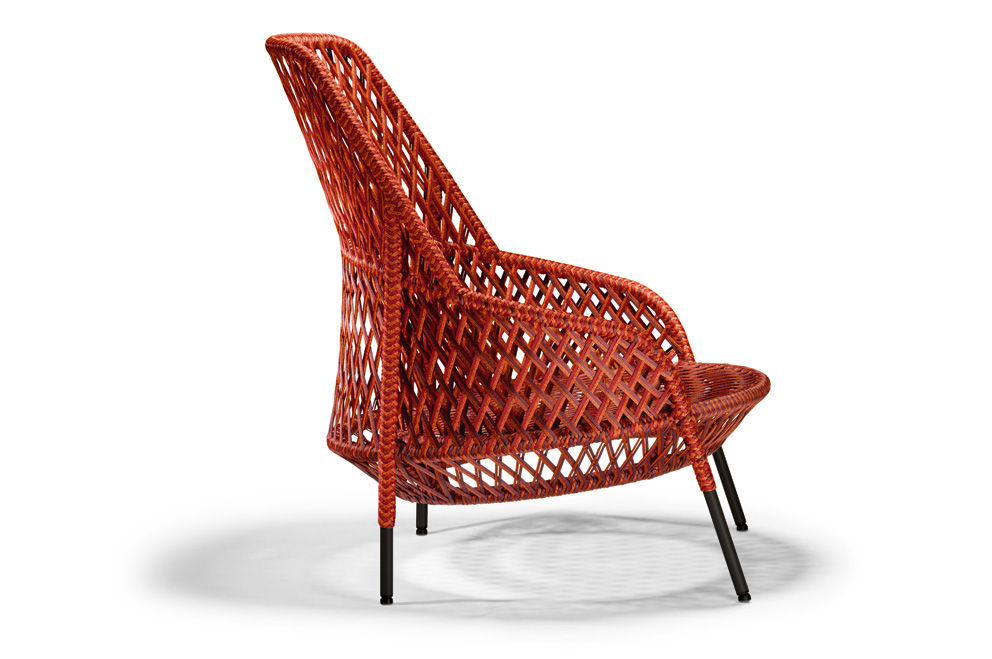 Inside, outside or inbetween: the lounge chair “Ahnda“ is not only impressive, but also very flexible. Photo © Dedon; photo above © Stephen Burks/Dedon
Advertisement