Even though such retro orgies, glorifications of Modernism, imitations and re-editions really do have a knack of getting on one’s nerves – in recent years the design world’s obsession with its own past has been more intense than ever; discovering within itself a cultural treasure trove that can be quoted, treated with irony, exploited, conceived as a safe bank or an asset. A seemingly never-ending number of manufacturers have taken to trawling through their archives, digging out the old “classics” and rediscovering design sketches that no one had shown an interest in for a long time. This year’s Salone and the fringe program around Milan featured a striking number of presentations where manufacturers were busy celebrating their own past or depicting design processes from by gone days: Kartell’s entire stand was covered in sketches, prototypes and models of older designs. While in celebration of their 50th anniversary, Flos likewise filled their showroom with display cases presenting preliminary models and samples of their lighting classics. Even in the middle of the city you could come across containers adorned with design classics culled from different decades. The history of the object, or so it seems, is now being packed into display cabinets like a butterfly collection, preserved and thus saved from obscurity.

The installation in the inner courtyard of the University of Milan, realized by Amsterdam designer duo Scholten & Baijings for automotive marque Mini, seemed to implement these ideas on a larger scale, and yet constituted a return to the essence of the car as a product as well as a simultaneous look to its future. After BMW demonstrated the courage to engage in a free conceptual examination of the car as a central theme with “The Dwelling Lab” by Patricia Urquiola and Giulio Ridolfo back in 2010, Head of Design for the BMW Group, Adrian van Hooydonk, and Head of Design for Mini, Anders Warming, took things a step further when they choose the Dutch designer duo for this year’s project. With their subtle color and material concepts, Carole Baijings and Stefan Scholten have in recent years developed their own unique style, which remains recognizable no matter which brand they work for. It was quite clear from the very beginning that they would go further than simply creating a classic concept car.

Even when working for the distinctive Mini brand, Scholten & Baijings remained true to their modus operandi and opted for a clear conceptual accent. When working on the “Colour One for Mini by Scholten & Baijings” installation, their approach to the theme at hand, namely the car, was almost scientific, stripping open the “Mini One” layer for layer to expose the individual pieces. “We peeled away the Mini’s layers like an onion,” says Stefan Scholten. As “art parts” the extracted components (doors, windows or the cockpit) were given a special treatment, provided with new textures and colors. Hidden beauties taken from the car’s innards, such as the dashboard or the abstracted steering wheel, were overlaid with fluorescent color pigments, visualizing their aesthetic qualities. The duo also reduced the components’ volumes as far as possible in order to elaborate on the car’s inherent features even further. Bags were developed for the car’s interior as was a sunscreen that also functions as a clutch bag; they questioned the manifest nature of existent functions and replaced them with narrative solutions.

Example: Together with Vincent de Rijk the duo developed transparent tires made of cast resin, whereby the most archaic component of the car becomes a stand-alone element and is lent a new aesthetic quality, faithful to its significance and dynamic nature. Seat and seat belts are upholstered with material designed by the duo themselves, aiming to kindle memories of the marque’s past on the race track, the artisan stitching intended as a contrast to the perfection of the mass-produced vehicles. The duo also came up with a simple alternative to replace the radiator grille, which they considered one of the car’s essential design elements and thus removed and accentuated with color: They drilled through the vehicle’s outer shell, which by now looked like a bleached skeleton, and attached a grid with thousands of holes which run through to the tail end of the car and are destined to provide the ventilation for the car. The doors, removed from the body of the car, were giving a gold coating, painted with matt porcelain paint, or the designer duo’s trademark color gradients. Finally, they printed the car’s windows with the blurred images of passing landscapes, which offered a view into the present, past or future, depending on the window’s position.

Of course, one could easily criticize all of this as unrealistic, overly aestheticized, far too poetic and almost esoteric. One could even say that it is more art than design. The question is what the manufacturer actually takes away from it, and whether it really will provide an impetus for Mini in the future, as Anders Warming claimed at the press conference. Yet answering down-to-earth questions and developing new functional solutions isn’t the priority here, it is rather about opening up a surprising perspective on typologies that are all too seldom challenged and toying around with the beauty of forms, textures and colors. The project is a cultural reflection upon existing structures, an analysis, in fact a dissection of forms that have now been re-polished, gilded and re-constructed, their beauty rediscovered.

In this way, presented beneath the pavilion’s transparent roof, the individual components look like shimmering insects in a display cabinet. But depending on who one spoke to, the presentation evoked connotations of the object layout in a “car clinic”, a padlock, a scientific decoding of some creature’s DNA, an enormous three-dimensional sketchbook, a colorful hodgepodge of precious items taken from a cabinet of curiosities, or an oracle bone, whereby the fleshless objects revealed a bizarre beauty and in their new arrangement afford a view to the future.

The installation by Scholten & Baijings for Mini was most definitely one of the aesthetically most pleasing presentations at this year’s Milan Design Week but it was also one of the most cryptic. This wasn’t about creating a concept car, built purely as a bombastic demonstration of a manufacturer’s progressiveness, never destined to go into production. Instead it was a poetic and inspiring examination of the theme, which playfully unveiled hidden beauty, questioned the functions of the each component that makes a car and kept their conceptual ideas just that, concepts, without immediately inquiring as to reason and feasibility. After all, according to Carole Baijings what the automotive industry considers a concept car is not a concept at all, but a finished car. In contrast to the end-to-end concept cars to be seen at the automotive trade fairs (with their infinitely repetitive demonstrations of progressivity, dynamic, strength and power) the installation by Scholten & Baijings actually offered a free space where you could dream up your own connotations, reflect upon the design process, upon the past and future of the marque. And above all the show granted subjective and emotional access to the properties that may shape the value of a car in the future. 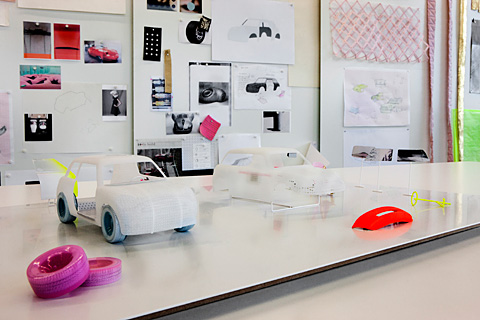 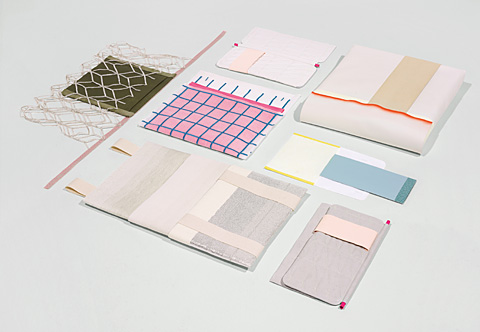 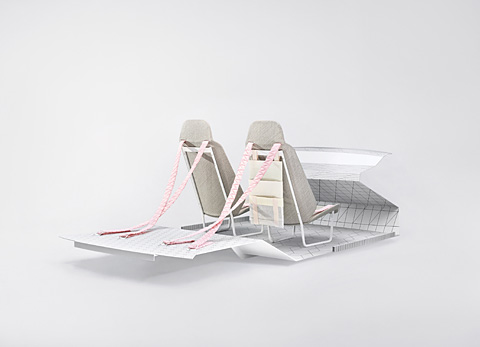 Proposal for the cockpit, photo © Mini 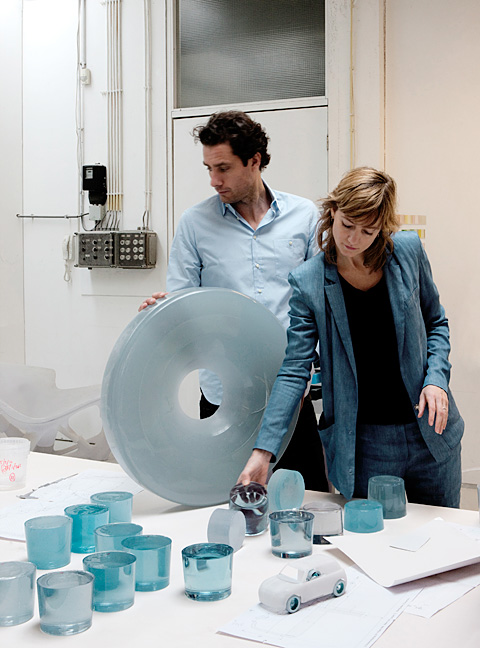 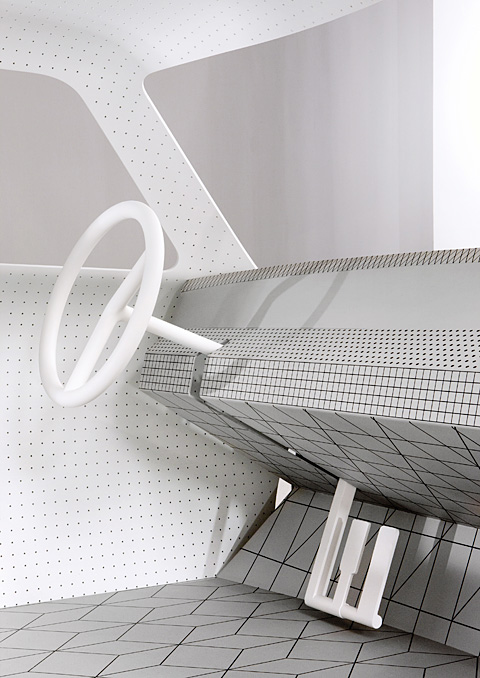 Patterns for the cockpit, photo © Mini 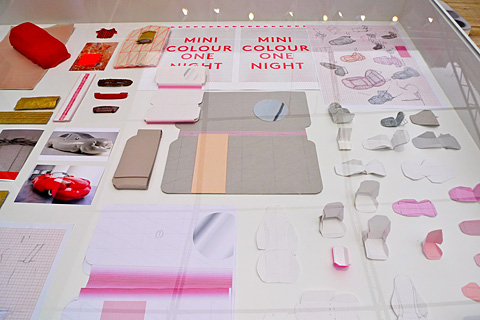 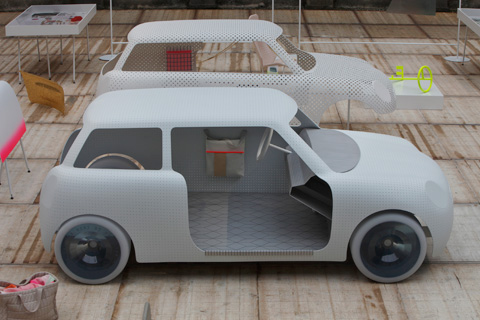 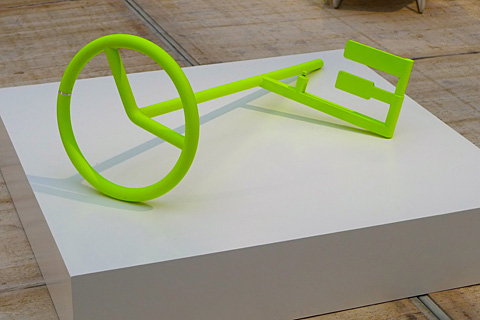 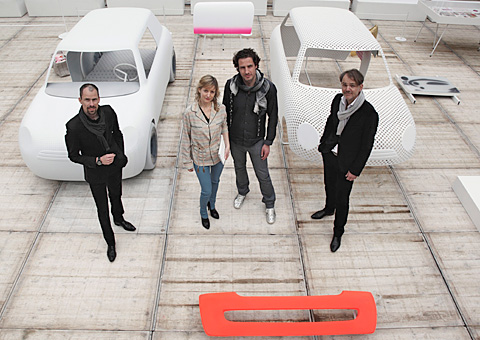 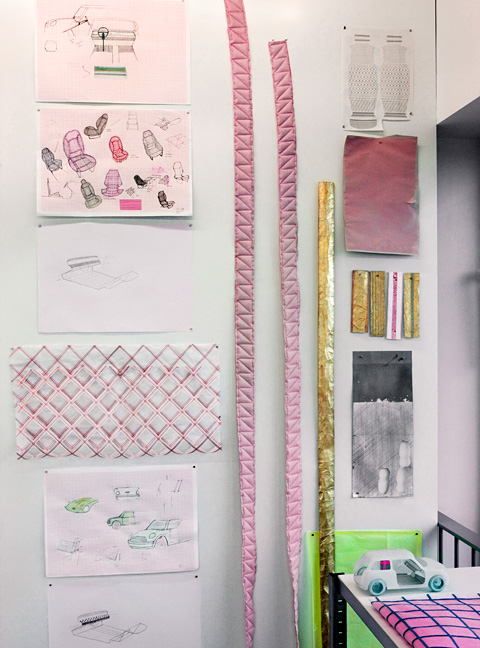 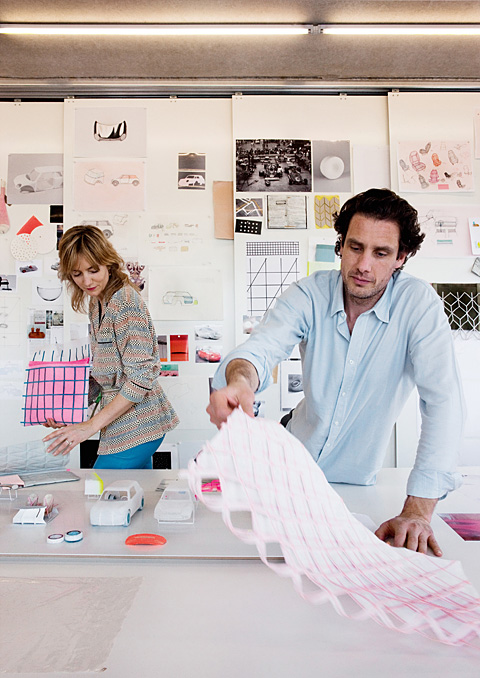 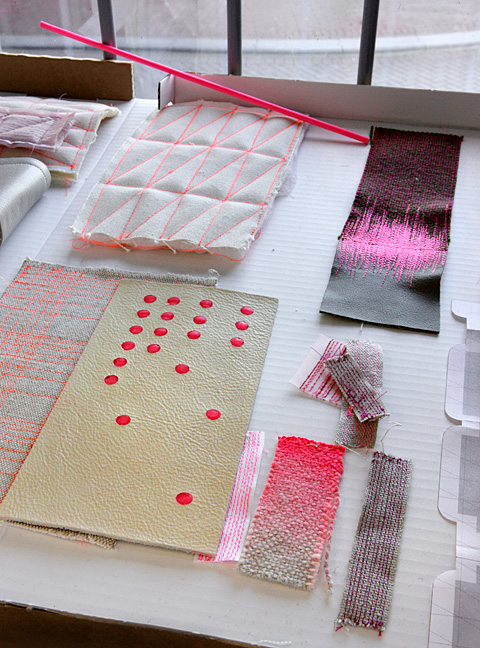 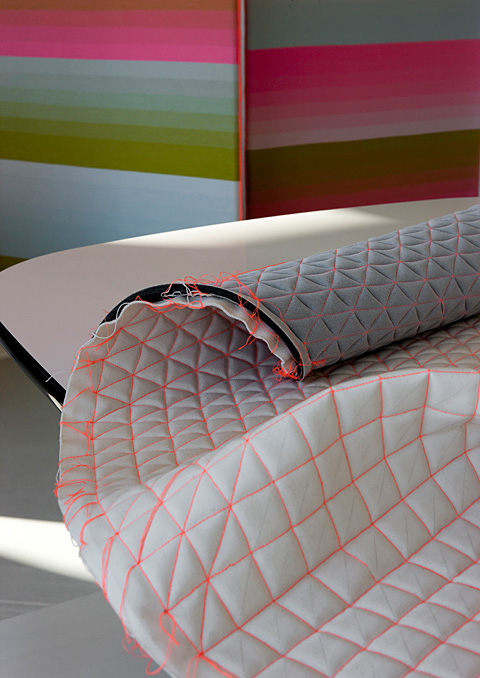 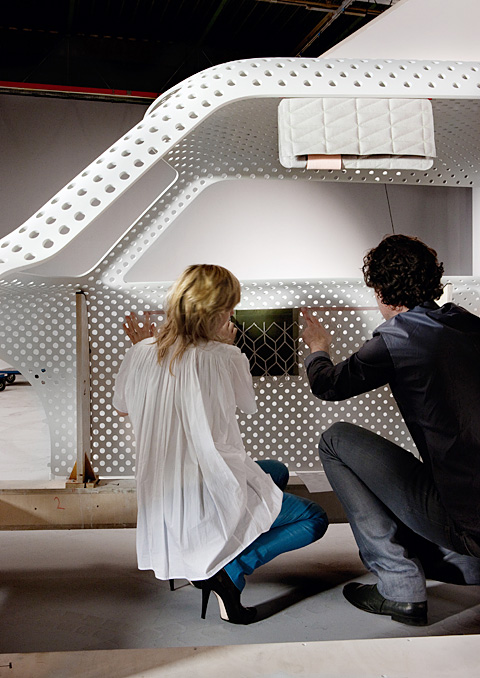 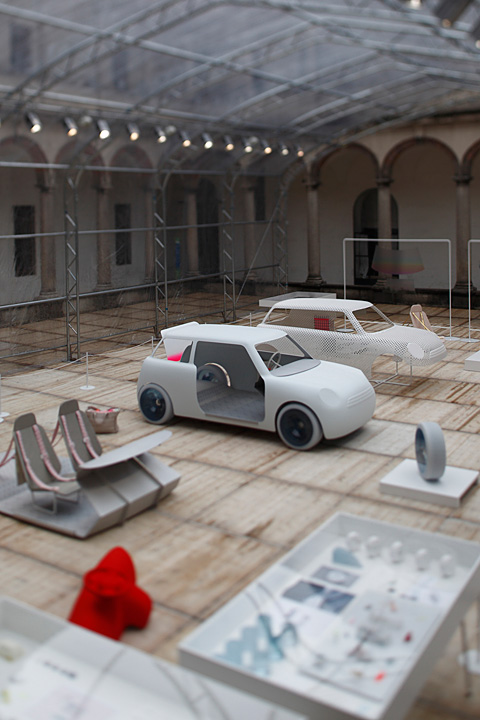 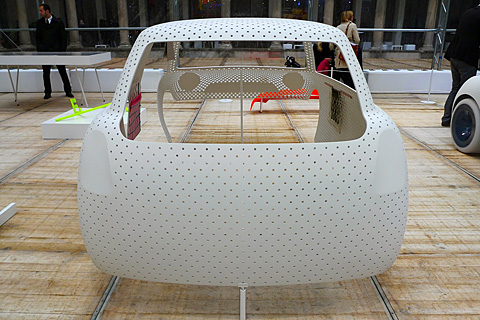 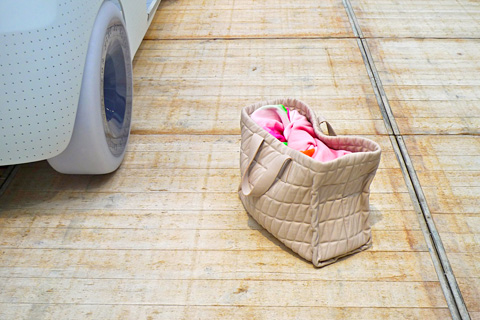 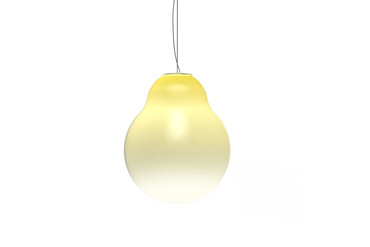 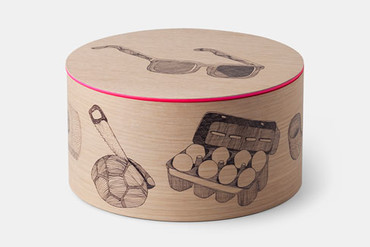 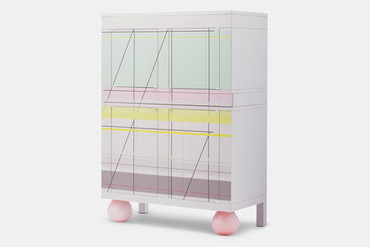 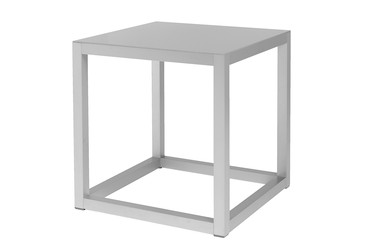