“This is perhaps the first new development in Dutch design in 20 years,” comments Lennart Booij, and he should know as he is curator for applied art at Amsterdam’s Stedelijk Museum and organized the “Dream Out Loud” exhibition. For the show, Booij and the Stedelijk called on all Dutch designers and all designers living in the Netherlands to submit work. More than 350 responded to the invitation and a jury then selected 26 designers from among the entrants, whose projects are now on display in the Amsterdam exhibition.

The works of the 26 designers are intended to document what Booij describes as design having turned its back now on “shallow gimmicks”. The young generation is no longer following in the footsteps of Dutch design stars such as Marcel Wanders or Studio Job, who still cause a real stir world-wide with their decorative and playful ideas. The new buzzword is instead “Social design”: the newcomers seek increasingly to try and solve social problems. Their works are not primarily intended to be aesthetically persuasive but to convince conceptually. They no longer set out to be “beautiful”, but to be “good”. They aspire to present solutions or at least partial solutions to challenges such as global warming and its impact, resource scarcity, environmental pollution and global imbalances.

Lennart Booij suspects that there are various reasons for the emerging sea change in Dutch design. First, or so he believes, the experience of the last world economic crisis plays a part here – many of the young designers went through it at a key time in their lives. Then there is that fact the in the Netherlands designers and philosophers have always been in close contact and in this way a critique of capitalism found its way into the design community. Second, Booij thinks there is a very specifically Dutch trait in “social design”, namely the conviction that survival can be a matter of using one’s own inventiveness. Just as their ancestors defied the sea to preserve land by means of dikes and windmill-driven pumps, so today’s generation is trying with its means to counter climate change and environmental degradation.

Booij knows that it is important not to weight design down with promises of salvation. Because this quickly attracts the accusation that you are only coquettishly touting social benefits and cannot actually make good on the claims. He prefers to showcase still imperfect and experimental approaches than to duck possible criticism from the outset. He hopes that the works on show will trigger debate and contribute to industry no longer being able to hide behind the purported lack of alternatives to its products and production methods.

A truly ideal-typical symbol of this approach is the “Fairphone”. Bas van Abel developed it in response to the despicable conditions under which the rare earths and precious metals need to produce smartphones are often mined. The “Fairphone” sets out to only obtain such raw materials from suppliers that comply with the company’s ethical code. And the often poor working conditions that prevail in smartphone production are also apparently avoided for the “Fairphone”. Moreover, the new “Fairphone 2” aspires to deliver fairness not just at the level of manufacturing: For the first time all the components are modular, meaning the user can easily replace parts subject to strong wear-and-tear such as the glass screen or the battery or retrofit additional or more powerful elements.

Boyan Slat’s “The Ocean Cleanup” has two things in common with Bas van Abels’ “Fairphone”: the capital needed to start the project was in both cases raised through crowdfunding; and both have already made quite a splash with their ideas. Boyan Slat has developed a drive-free system that can help effectively reduce the plastic waste polluting the oceans: two v-shaped containment booms, each 50 kilometers in length, simply drift across the water, snaring the plastic, and transport it to a collecting station in the middle of the system. An initial prototype is already undergoing field trials in the North Sea.

Daan Rosegaarde’s seven-meter “Smog Free Tower” (News&Stories of July 9, 2016) uses an electrostatic cleaning system with the energy requirement of an electric kettle to purify 30,000 cubic meters of air of fine-particle dust. Roosegaarde’s device then compresses the fine particles into small cubes that can be reworked as jewelry – and the sales partially finance the project. The tower is at present still a one-off, but Roosengarde is busy planning to present it in China in order to advance the discussion there on air pollution.

Another prototype stands in the exhibition space itself. Pieter Stoutjesdijk created a small single-room shelter made of wood for the victims of the 2010 Haiti earthquake – and it stands out for two features: It was designed using an open-source database for construction plans Stoudjesdijk programmed – anyone can access the plans and use them. The individual components can then be produced using a customary CNC mill. The second special aspect is the construction material. The little house is made completely from ECO boards, i.e. composite panels produced from agricultural waste. Stoudjesdijk’s vision is to initiate serial manufacture of such small houses world-wide as the plans are universally accessible as are the raw materials – and you only need a few machines. The wooden house on show can be erected simply using a rubber mallet as all the individual components are precisely cut to fit.

The designs Hella Jongerius has devised for Dutch airline KLM are further down the road to fruition. Jongerius, the “founding mother of Dutch design,” as Lennart Booij puts it, is a member of the same cohort as Marcel Wanders, for example, but for some time has been calling for an end to “meaningless Dutch design”. And her insistence that there is no need for constant renewal comes to bear in her fit-out for the Business Class in KLM’s fleet of Boeing 787 Dreamliners that are now going into operation. The truly “cradle-to-cradle” floor covering is made in part from the yarn of old KLM uniforms, with the remaining wool stemming from Scottish sheep bred for meat. It is the first time that such recycling and use of ‘waste’ materials has been used for an area subject to such strict regulations.

The Amsterdam exhibition focuses not only on things that are on the drawing board or about to be realized. With a view to the call for a change in perspective, some of the utopian/visionary projects are even more interesting – hinging on adapting or re-envisioning technologies currently under development. Thus, the “Next Nature Network” speculates on the opportunities afforded by lab-cultivated, so-called in-vitro meat, produced artificially from stem cells. “The In Vitro Meat Cookbook” contains not only various in part bizarre recipes such as “knitted steak”, but also addresses issues of environmental destruction, food shortages, animal suffering, and how these relate to existing eating habits. The ideas the “Next Nature Network” offers on lab meat are intended to help advance the social discourse on the subject.

British designer Agatha Haines, who lives in the Netherlands, goes a step further. She was inspired by the research on bioprinters that will in future, so the hope, be able to “print” tissue structures or even entire human organs from artificially cultured cells. Her idea: Might it not then perhaps be possible to design the organs to include new functions? Organs, for example, that themselves cure diseases the body suffers from? Thus Haines imagines a novel organ made from the cells of an electric eel that can generate electric shocks. It would be implanted into patients with defective hearts and in an emergency act as an in-body natural defibrillator.

Young designer Floor Nijdeken takes the concept of “social design” quite literally, namely as a form of design meant to nurture community. To this end, he resorts to an ancient cultural tool, the needlepoint frame. Nijdeken turns it into a large frame table at which four people can easily sit at once and can together embroider the fabric stretched across it. The cloth is rolled out from one side and, once a section has been embroidered, the roll unfurled further. The needlepoint table is destined for public spaces where it can encourage people to sit down and do something together. In the Stedelijk Museum it stands in the entrance lobby and is performing its tasks most successfully. Sometimes, innovation simply starts at the very beginning again. 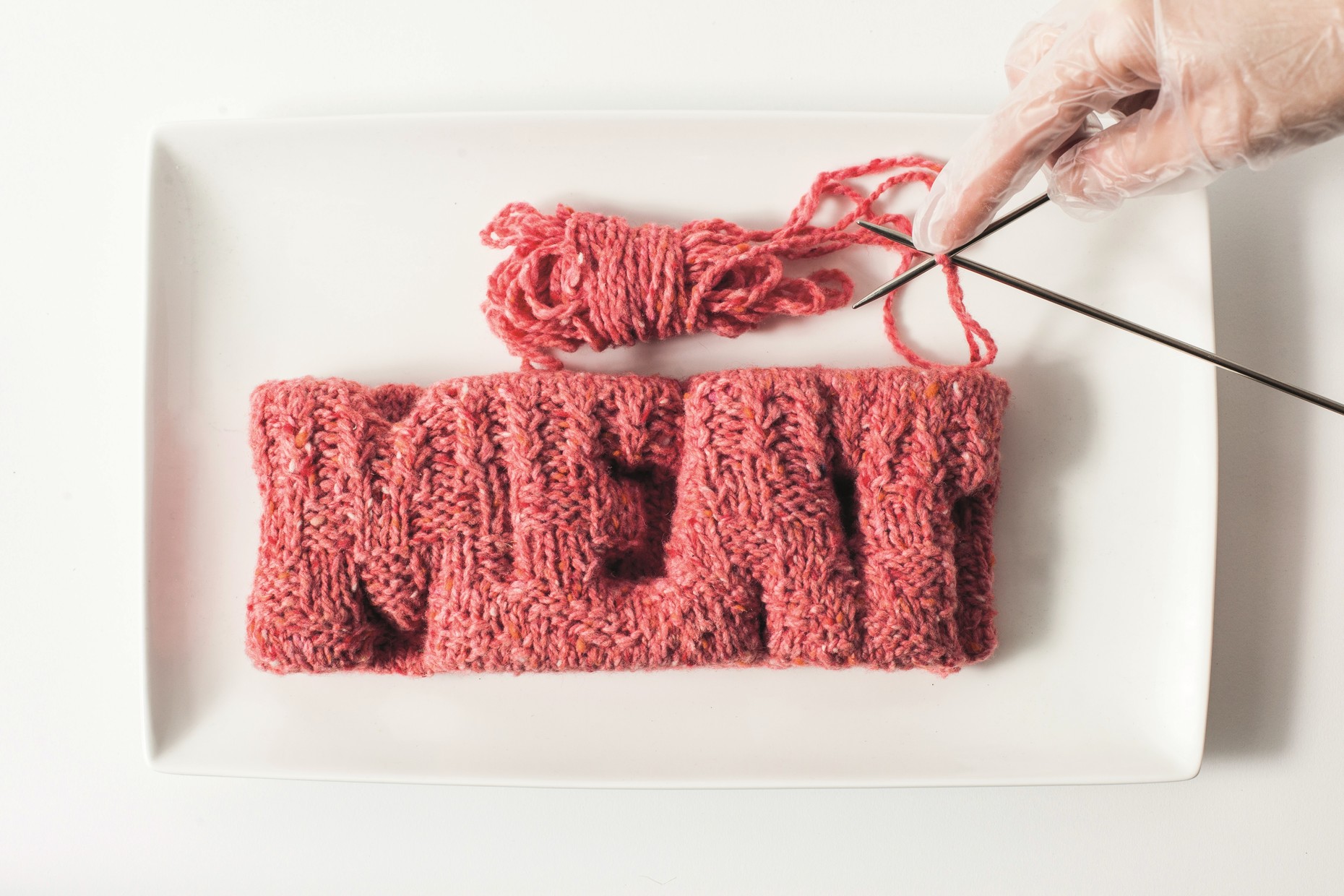 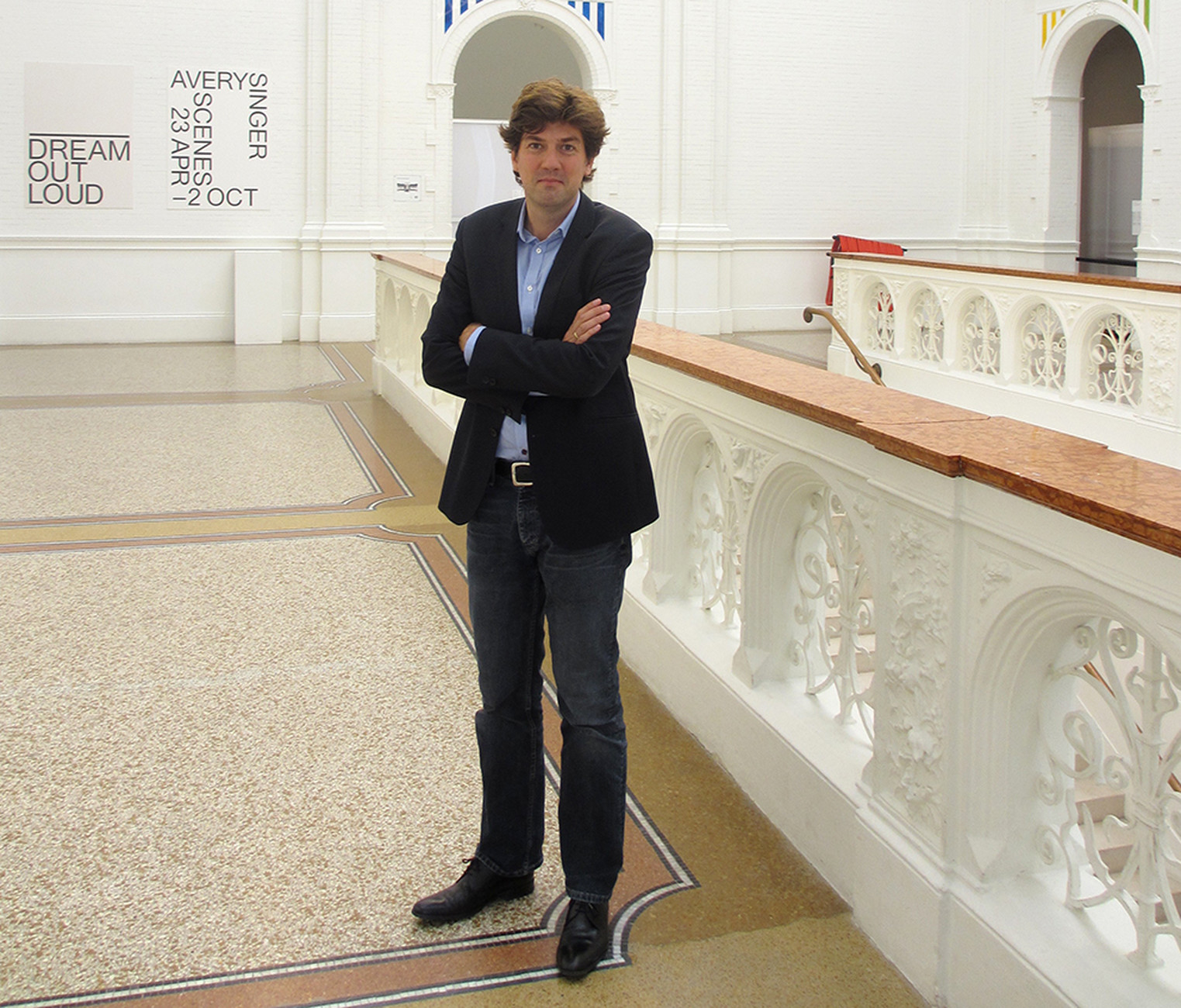 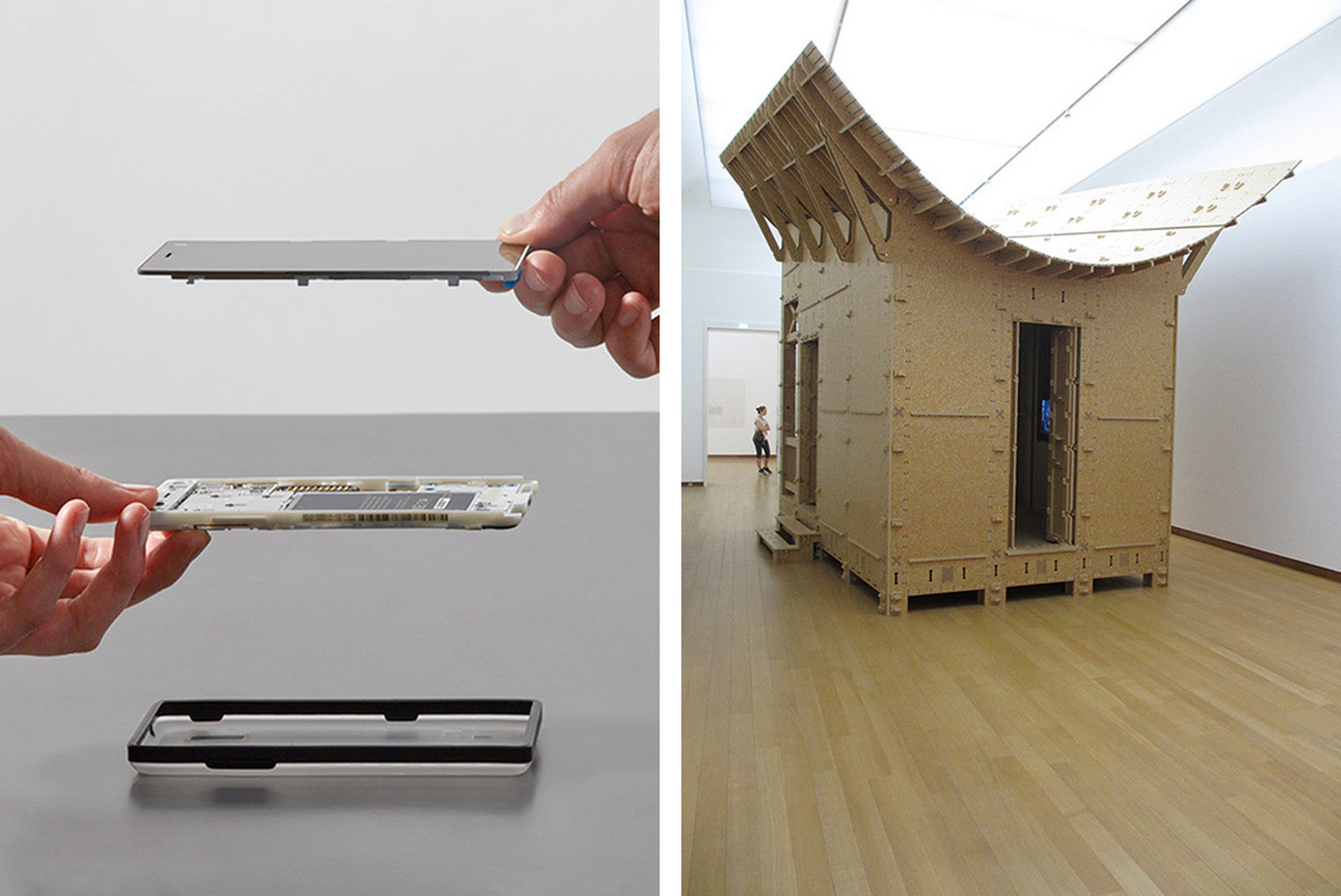 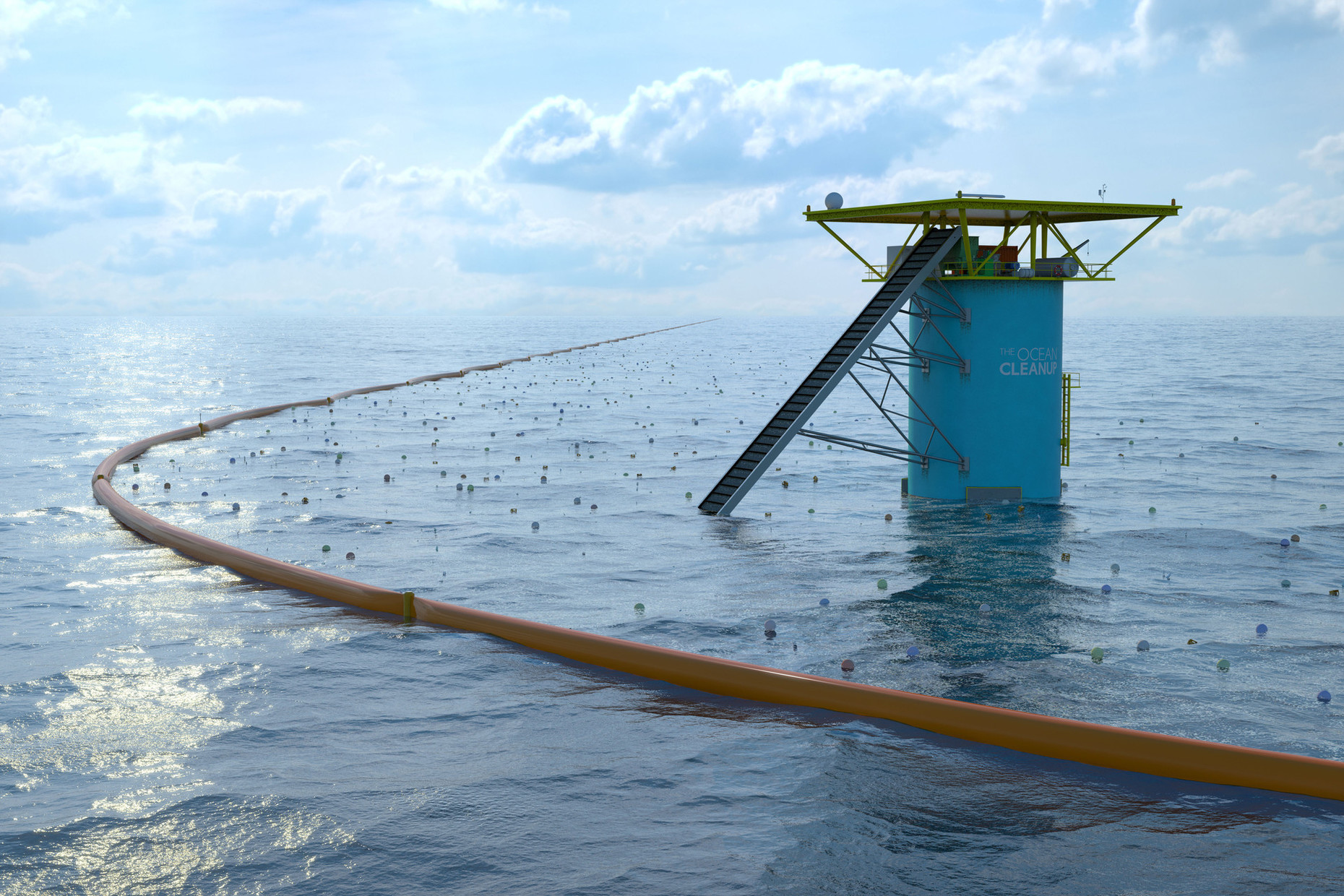 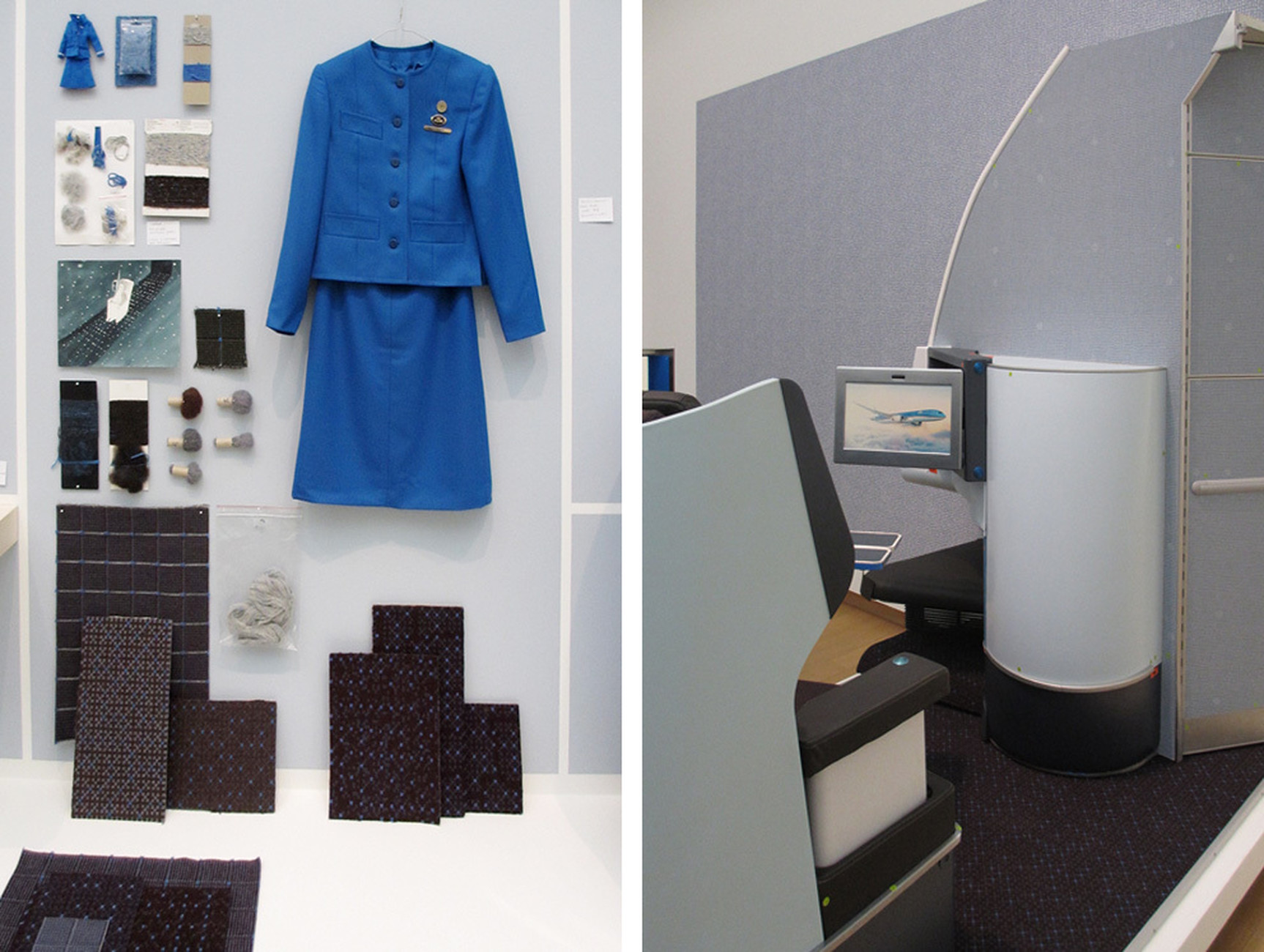 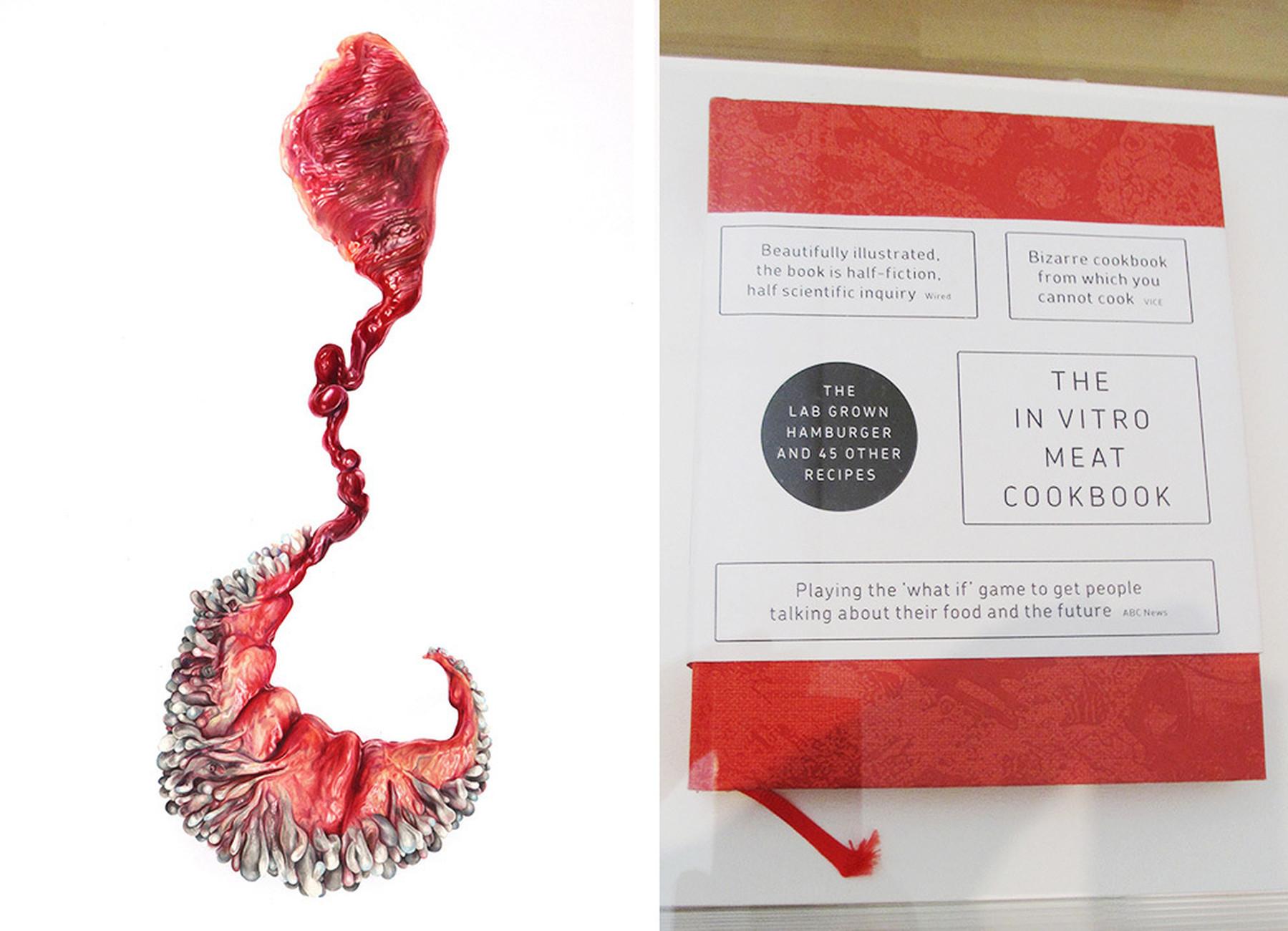 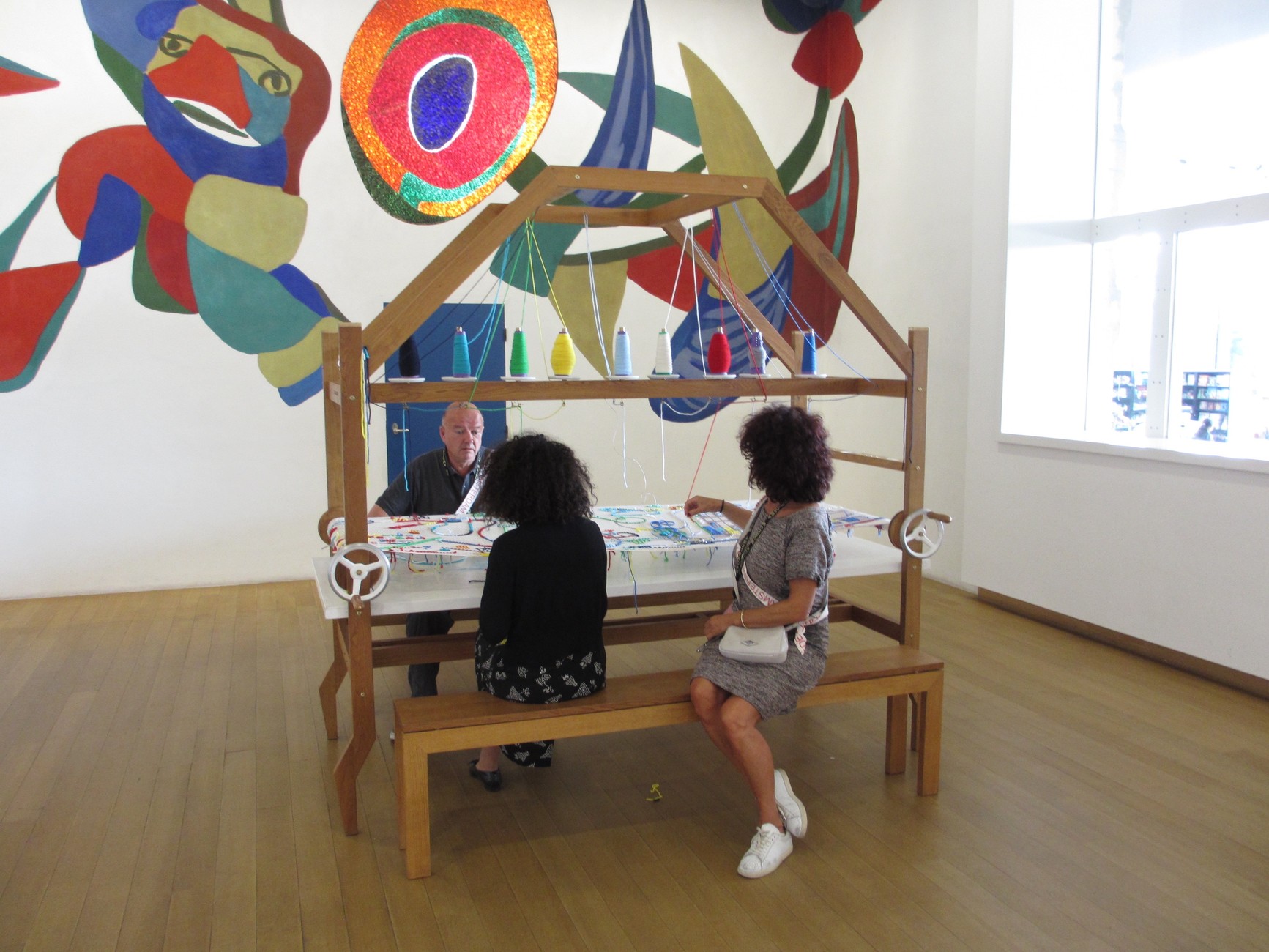