Cologne is not pretty. Cologne is a feeling, according to the Rhine-side city's slogan. And don't think that the city has little more to offer in architectural terms than its cathedral. You just have to look closer. During the Passagen, for instance, which takes place annually parallel to the furniture fair imm cologne. Ehrenfeld in particular, a district once occupied by factory workers and artisans that has largely been ignored until now, is bursting with factory buildings that form a perfect setting at the event especially for young designers.

Once again the orange and black Passagen flags could be seen all over Cologne announcing the numerous design events. Plenty of stores jumped on the bandwagon, setting up special window displays during the trade fair period, and universities and a museum also took advantage of the flood of visitors to imm cologne to raise their profile. Even some hotels highlighted their design virtues. The Passagen encompasses around 200 events, mostly in the city center. But particularly a little further out, in the former industrial area Ehrenfeld, there was a lively design scene. In an unconventional setting, visitors enjoyed exciting presentations of new design in an historical context.

At first glance the district seems somewhat deserted. It is characterized by industrial buildings, graffiti, parking lots and supermarkets. You even briefly doubt whether the scheduled design events really are to be found here or whether visitors have been put off by the miserable weather forecasts. Then one of those hip little cafés suddenly appears behind parking cars and trucks, one like those you find in Berlin's Kreuzberg district and would not particularly expect to see in the middle of an industrial area. On closer inspection the backyards also turn out to be tended green spaces belonging to newly renovated office buildings with so-called industrial charm, which seem to have been discovered by more than just artist and designer Mike Meiré and British technology company Dyson. The bathroom company Ultramarin also recently opted to make the former gasworks Alte Gasfabrik, a listed machine hall, its new showroom. Its 500 square meters of exhibition space will no doubt enable an interesting interplay between the bathroom objects' forms and surfaces.

Nearby for some years now the project Design Quartier Ehrenfeld (DQE) has been offering young designers a creative venue – and this year saw the fifth edition of Design Parcours Ehrenfeld in the vicinity of the Helios complex. Once again the young designers demonstrated a fine feeling for excellent presentations. The former factories with their rough concrete floors, crumbling brick walls, machines, metal scaffolding and spattered paint provided a highly contrastive backdrop. Group exhibitions, a store with selected design objects and Café Horst offered an unconventional counterpart to the furniture fair.

The designers didn't need much to transform the bare halls into a lively setting for their product presentations. Wooden planks from the hardware store served as partitions and tea chests, pallets or even a cement mixer as podiums. Recycled furniture could be found in the cozy Café Horst and the attractively designed program made of newspaper lent the Parcours a coherent appearance. It was particularly exciting to see that many of these simple structures and materials also featured in the design objects. For instance, industrial designer Thomas Schnur, who initiated the designer collective "Frankfurt trifft Köln", conceived a simple plug system to assemble his "Fragment Table", consisting of wooden, metal and plastic components, in no time. While the table works with the plug concept, his multifunctional "Hook up" focuses on twisting: a wooden rod twists into the base and in turn metal hooks that spiral around the wooden rod are twisted into it. The result is a reduced and flexible stand that lends itself to storing kitchen utensils, jewelry or clothing.

Florian Kallus and Sebastian Schneider from the studio kaschkasch cologne presented an object consisting of three interconnected metal rods that, when positioned against a wall, turns out to be a coat stand. The concept of Cologne design store Utensil likewise blended effortlessly into the DQE exhibition in Ehrenfeld. Its product range encompasses objects from the world of work and industry, reinterpreted for home living. Thus for instance, the shape of the luminaire "Socket" by Joachim Lindenbeck is inspired by old workshop lamps. The result is a porcelain base, a colored textile cable and a bulb according to taste. Nothing more.

The insider tip for a sandwich break during the Parcours was the Italian gourmet shop nestled amongst the exhibition halls in Ehrenfeld: a dark warehouse, stuffed with tacky glittering garlands and bric-a-brac, but all kinds of delicacies. It is these special qualities of the district that make Ehrenfeld an inspiring place for artists and designers. There were numerous new, high-grade products on show, but what will stand out more looking back: a buzzing atmosphere and a good feeling. 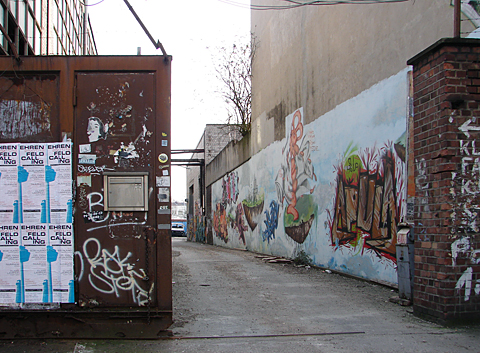 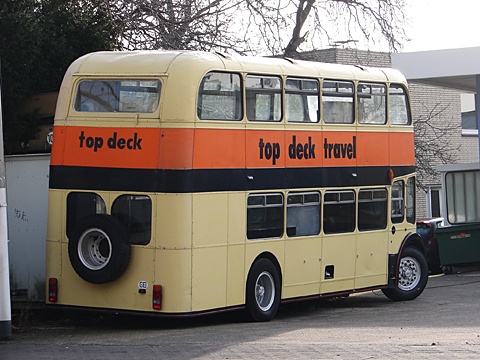 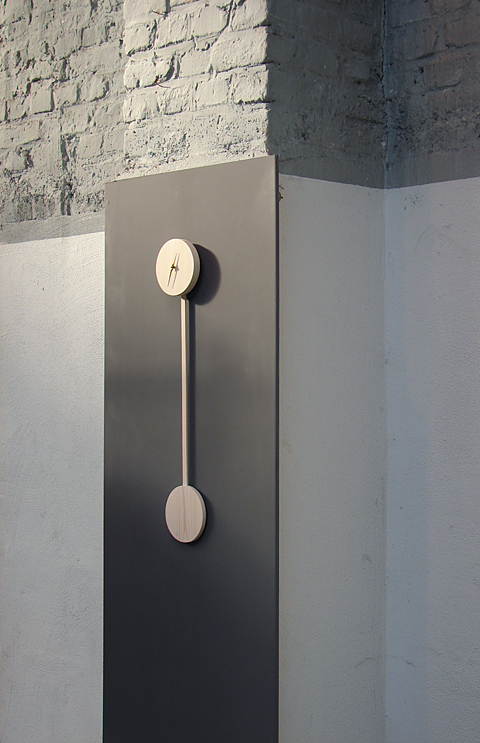 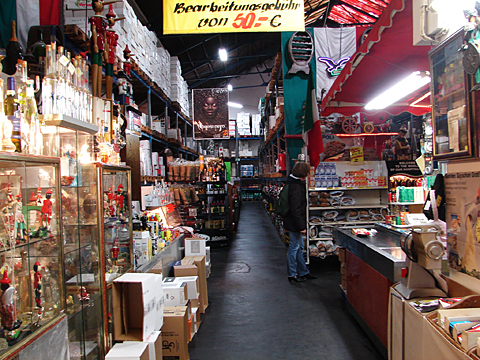 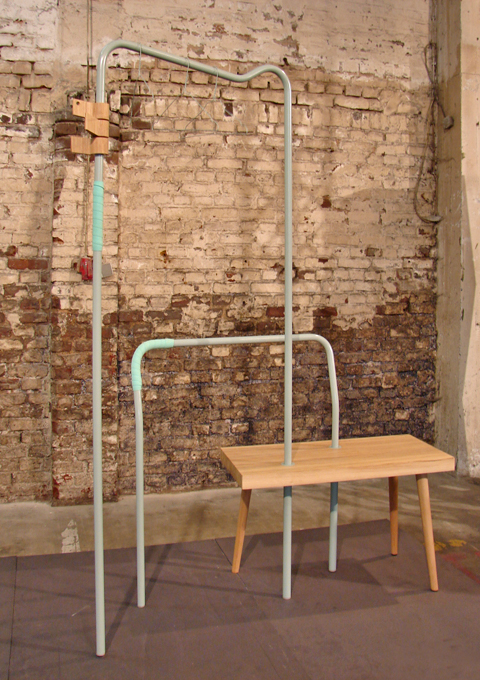 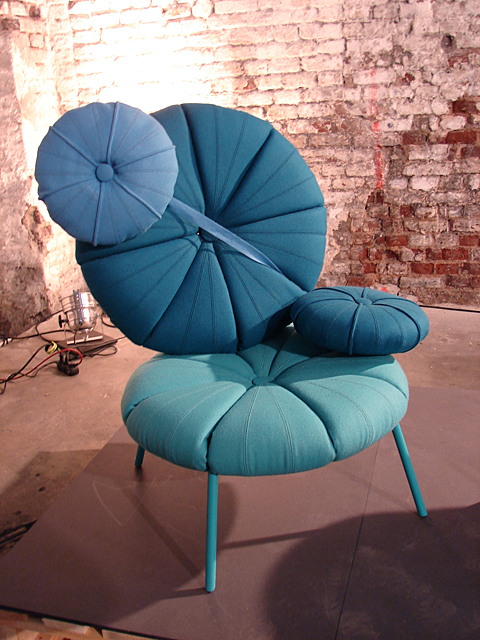 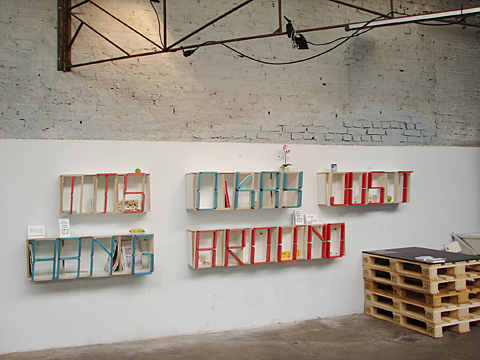 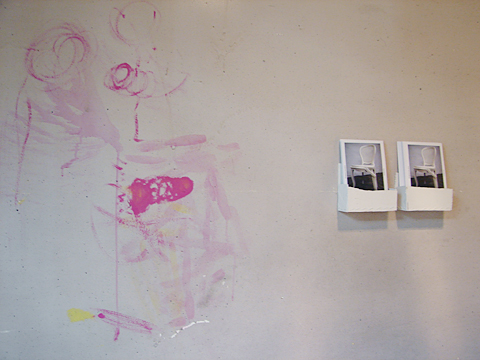 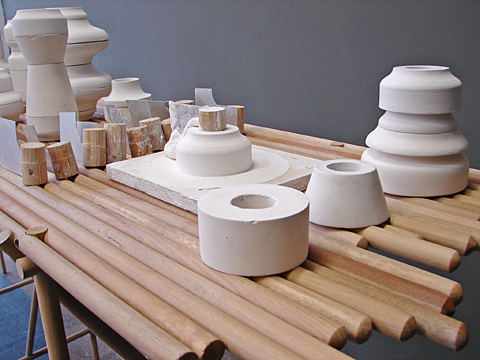 Plaster mold for the production of the collection “Superimposed Vases“ by Francois Dumas, photo © Nina Müller 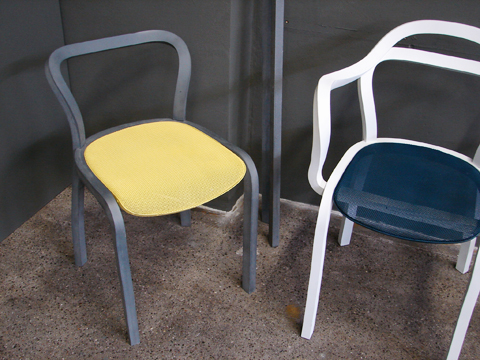 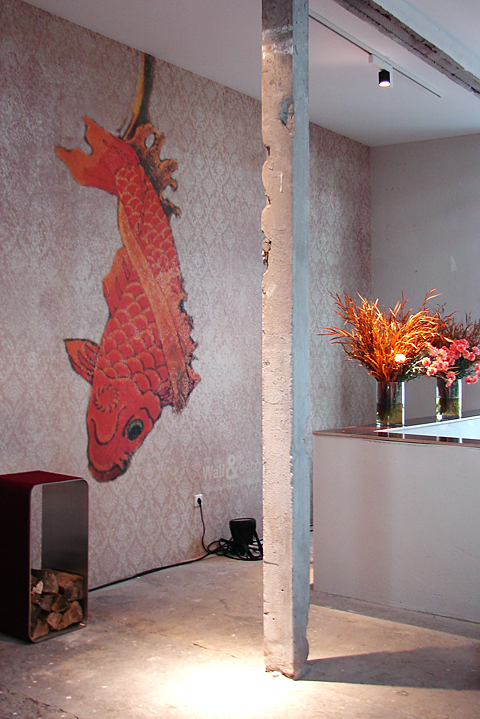 Showroom by Ultramarin in the Altes Gaswerk, photo © Nina Müller 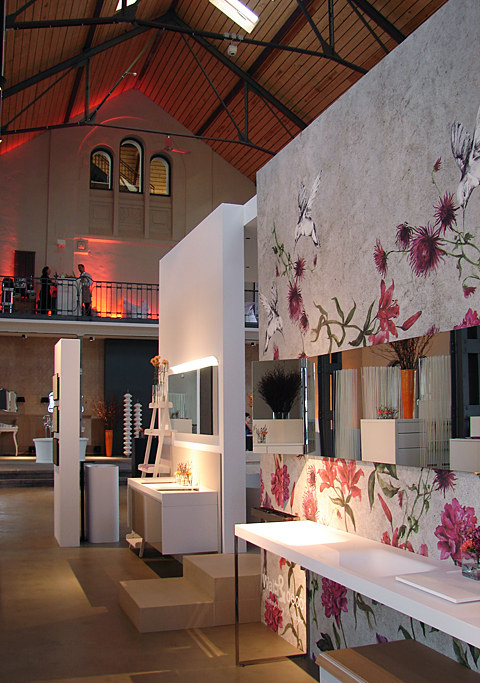 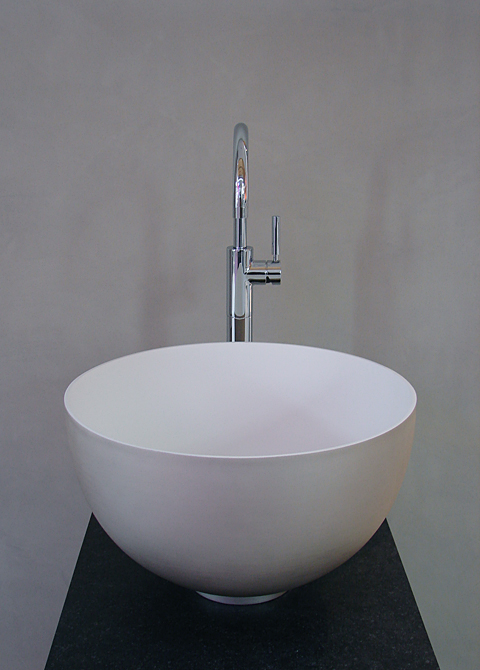 Washing basin in the showroom of Ultramarin, photo © Nina Müller 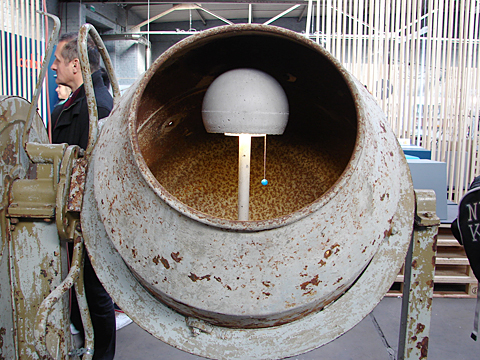 Exhibition in the hall of the Design Parcours Ehrenfeld, photo © Nina Müller 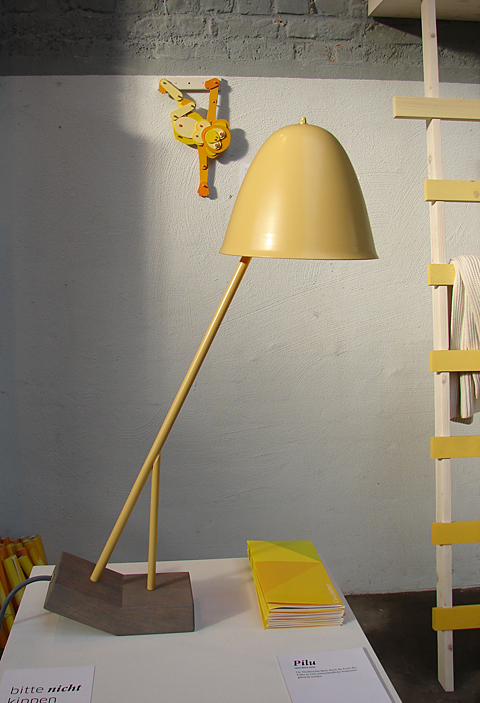 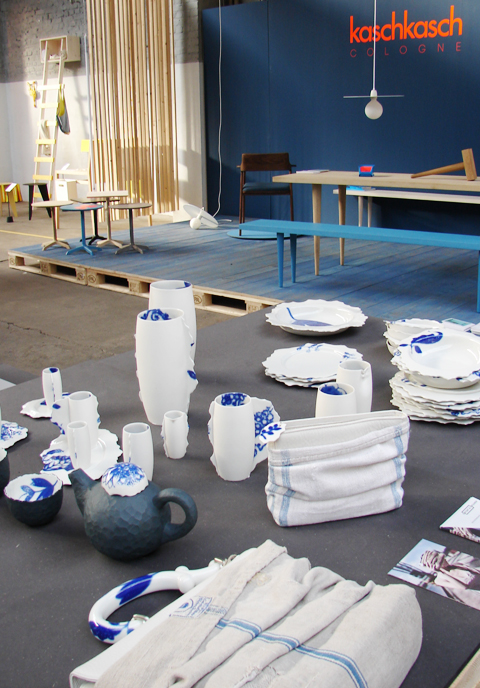 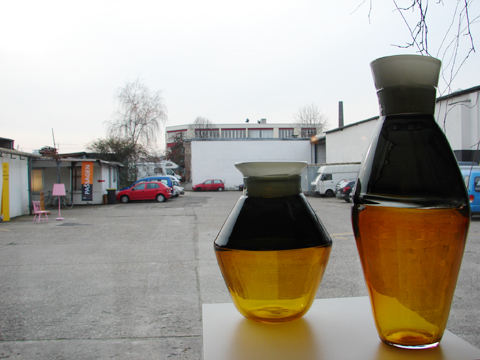 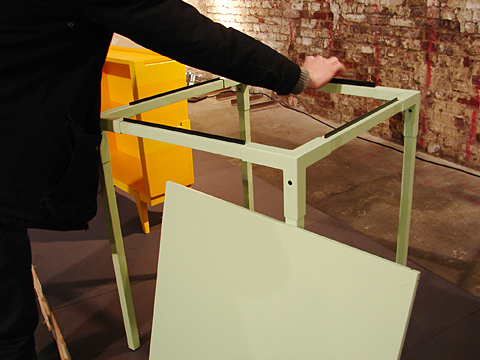 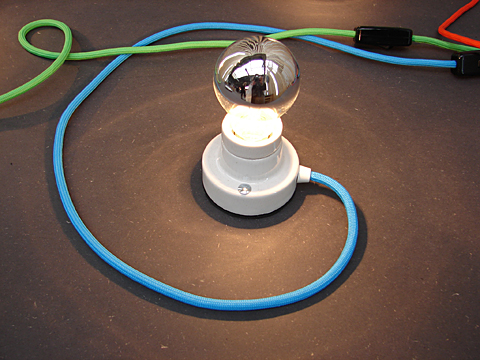 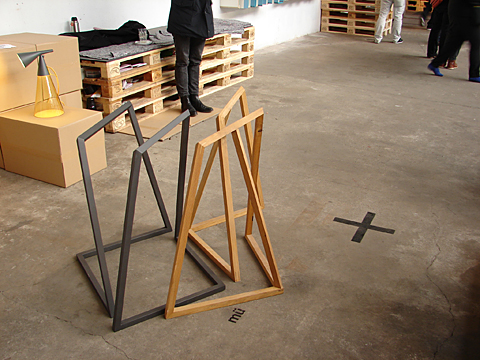 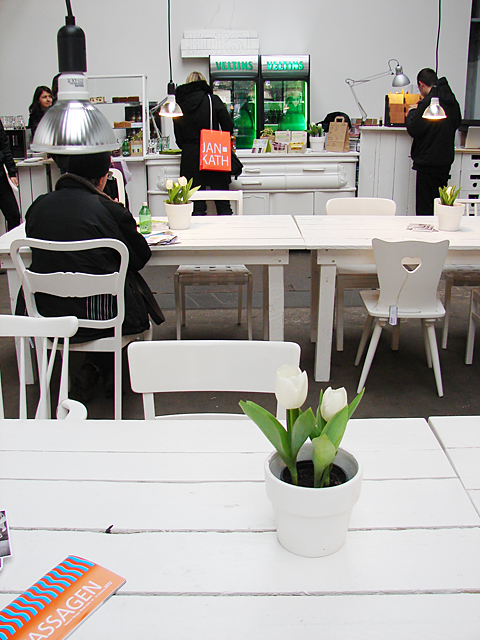 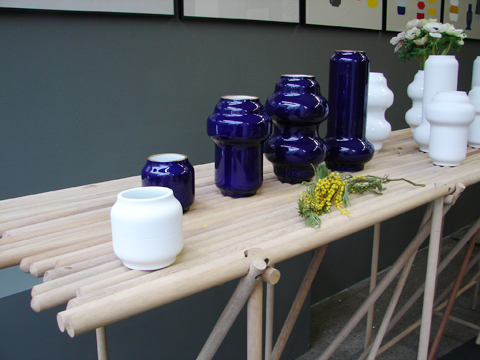 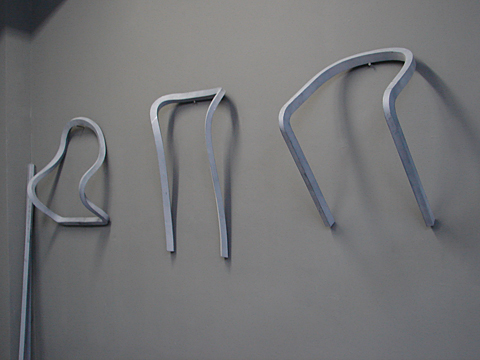